To say there is competition between Samsung and Panasonic is something of an understatement. They are the Chelsea and Arsenal of the consumer electronics world, arch rivals in almost every field in which they operate, and not least in the area of digital cameras. Samsung entered the digital camera market a year later than Panasonic, and at least at first didn’t seem to take the new technology seriously, whereas Panasonic was producing top-quality cameras as early as 2001. As a result Samsung has been playing catch-up, launching cameras to compete with specific Panasonic models, such as its compact NX system which competes directly with Panasonic’s G-Micro system, or the WB650 which is a direct rival for the Lumix TZ10. Samsung has also launched a camera that is a close match for one of Panasonic’s strongest model lines, the high-end compact LX series.

The Samsung EX1 was launched in February this year, several months before Panasonic announced the Lumix LX5, and so it should be seen more as a response to and rival for the LX3, however it is an exceptionally well-specified camera and compares well to the newer LX5 also. It features a 10-megapixel 1/1.7-inch (1.09cm) CCD sensor (the same size and resolution as the LX3, the LX5 and the Canon PowerShot G12 and S95), a fully-articulated 7.62cm (3.0-inch) AMOLED monitor with a resolution of 307,000 dots (VGA), and a superb 3x zoom Schneider-Kreuznach lens with a focal length equivalent to 24-72mm and a maximum aperture of f/1.8, making it the fastest lens on any current digital compact, beating the f/2.0 optics of the LX5 and S95. 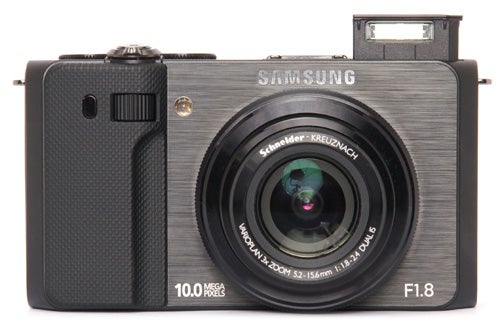 With the EX1 Samsung has pulled out all the stops to produce a semi-pro compact that can compete on equal terms with the established brands in the field. It is extremely solidly built, with a strong all-metal body, good secure handling, a comprehensive array of well designed controls, Raw mode shooting, and fast, efficient performance. It is an extremely impressive camera by any standard, but one of the most remarkable things about it is the price. The Panasonic LX5 is currently selling for around £360, while the Canon G12 will cost you a hefty £390. Even the compact Canon S95 is selling for around £300, however thanks to its immense industrial manufacturing capacity Samsung is able to put the EX1 into the shops for around £280. It is, to coin an over-used phrase, a lot of camera for the money.

As you might expect from a top-shelf product like this, the EX1 is well equipped with useful features. The main exposure modes are set via a dial on the top panel, and consist of program auto, aperture and shutter priority and full manual exposure, as well as a full auto setting, video recording mode, a high-ISO dual-IS mode, and a scene mode, with 12 scene programs. Next to the exposure mode dial is a drive mode selector, with single-shot, continuous shooting, two and ten-second self timer and an auto-bracket option. The centre of this dial also holds the on/off button.


Exposure values are adjusted by a roller control on the front handgrip, positioned just under the right forefinger, and by a rotary bezel around the D-pad. Other external control include a dedicated video recording button, a metering mode button, and exposure lock. All of the EX1’s controls operate with a reassuring solidity and responsiveness, and feel well mounted and durable.


The EX1 has both a conventional main menu and a quick function menu which should be used for commonly-used shooting adjustments. It does contain some of these such as image size and quality, white balance, focus area selection and the PhotoStyles tone control, but it also carries less useful options such as the gimmicky Smart Filter (miniature, vignette or fish-eye effects) and face detection options, while more useful options such as exposure compensation are relegated to the main menu. 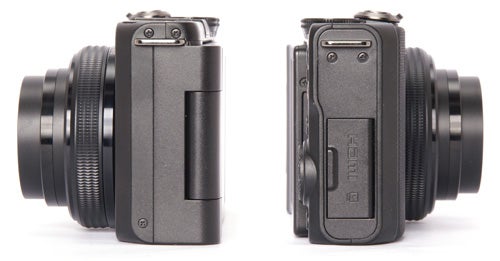 Despite this slight oversight, and despite its complexity, the EX1 is surprisingly easy to use. The controls are sensibly laid out, the new animated high-res menus look great on the bright AMOLED screen, and the twist-and-flip articulated monitor adds some welcome versatility. No doubt the usual moaning Minnies will complain about its lack of an optical viewfinder, but with a monitor as good as this you don’t really miss it.


One minor disappointment is the video recording mode. While its main rivals can shoot 720p HD video, and some compacts can shoot full 1080p video with stereo audio, the EX1 is limited to 640 x 480 resolution at 30fps, with mono audio. However at least you can watch the recorded footage on your TV thanks to an HDMI output cable.

The camera’s overall performance is very good. It starts up and is ready to take a picture in a little over two seconds, and in single-shot JPEG mode it takes approximately two seconds per shot, or three in Raw mode. However Samsung has applied its usual annoying shutter control logic, whereby if you press the shutter button too quickly while the camera is starting up or processing the previous shot, it fails to register and you have to press it again. In continuous shooting mode it can manage approximately 1.5 frames a second, although raw shooting is not possible in continuous mode.

The autofocus system is also very fast and accurate, focusing in a fraction of a second at all focal lengths and most lighting conditions. Low light focusing is especially good, and the EX1 has a good bright AF assist lamp with a range of several metres.


The overall image quality is certainly very good. The faster shutter speeds made available by the f/1.8 lens mean reduced camera shake and motion blur, and the narrow depth of field it provides is great for creative shots. The lens quality is as superb as its prestigious name would suggest, providing pin-sharp results from corner to corner, with virtually no barrel distortion or chromatic aberration even at the 24mm-equivalent wide end. The level of detail recorded is as good as anything in its class, as is dynamic range and colour depth.


The only slight stumble is the EX1’s noise control at higher ISO settings. Comparing shots at 400 and 800 ISO directly with the Panasonic LX5, while the results are far from disappointing it’s clear that Samsung still has some work to do in this area. 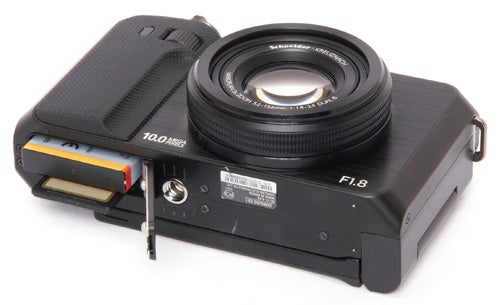 The crucial question is whether or not the Samsung EX1 is a viable alternative to the Canon G12 or Panasonic LX5, and I would say that for the vast majority of users the answer is a qualified yes. It offers similar performance, build quality and handling, almost the same level of versatility and creative control, and under most circumstances the image quality is also comparable. Its more expensive rivals do offer better image quality at higher ISO settings, but that is their only real advantage.

The Samsung EX1 is an outstanding camera by any standard, offering superior performance, build quality and handling, a high level of creative control and a good range of useful features. Under most circumstances its image quality is also superb, comparing well to its more expensive rivals. For a top-shelf compact it is surprisingly good value for money.

”Over the next few pages we show a range of test shots. On this page the full size image at the minimum and maximum ISO settings have been reduced to let you see the full image, and a series of full resolution crops have taken from original images at a range of ISO settings to show the overall image quality. These pictures were taken indoors using tungsten photoflood lighting. ” 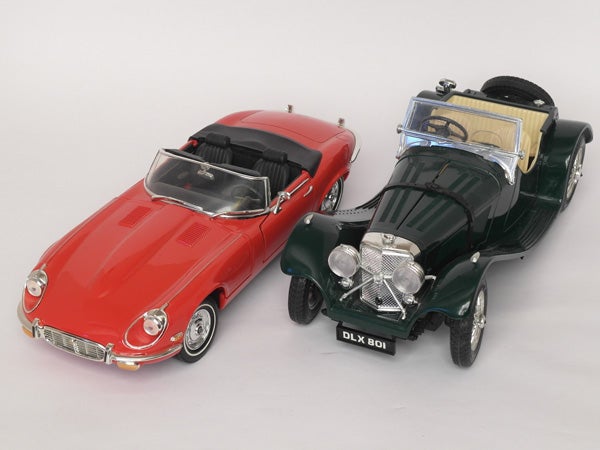 This is the fuull frame at minimum ISO. 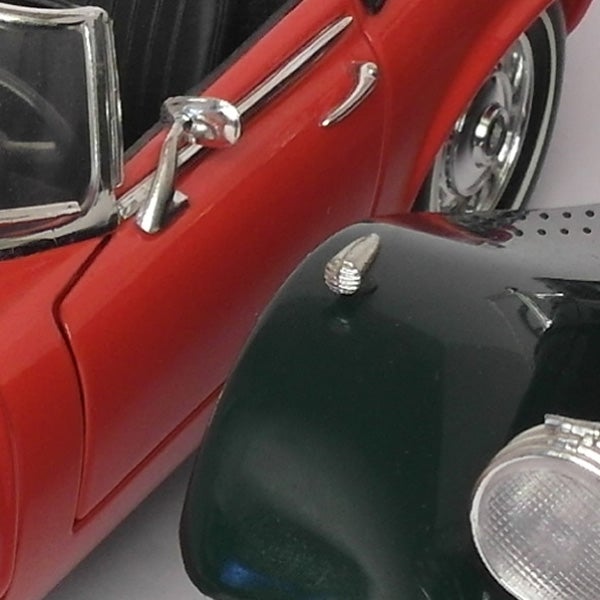 At 80 ISO the image quality is fantastic, with good colour and clear, sharp detail. 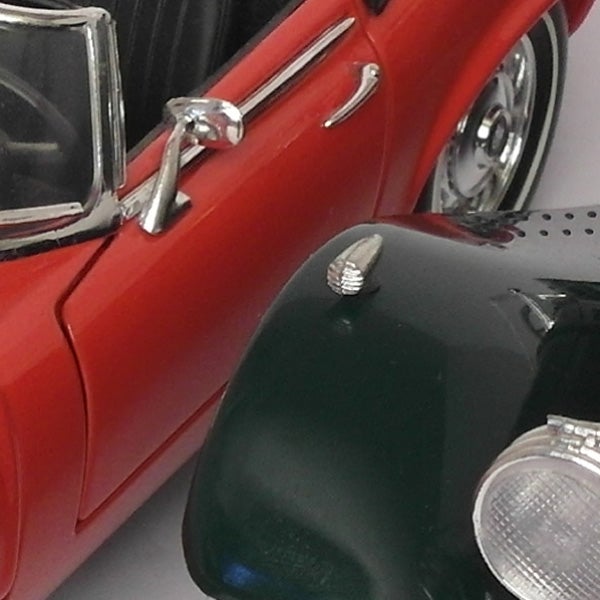 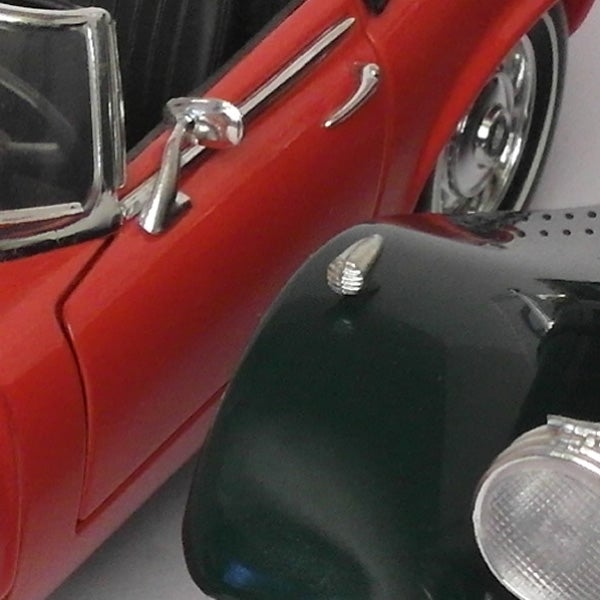 Some noise is becoming visible at 200 ISO. 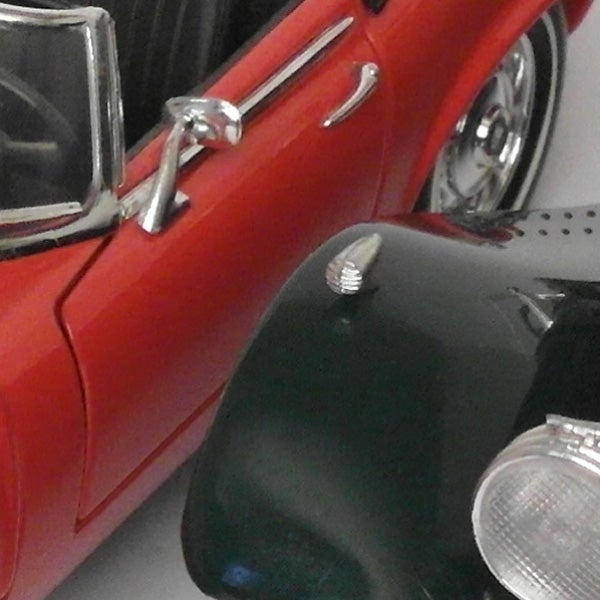 At 400 ISO noise is starting to become a problem. 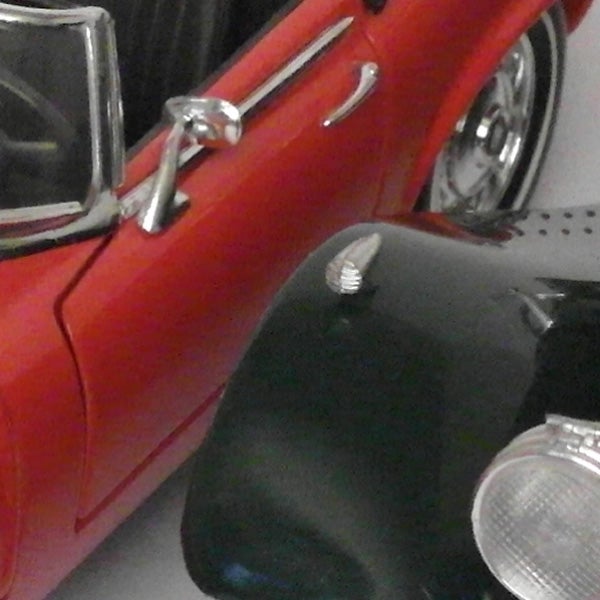 Pixel binning at 800 ISO has reduced the level of fine detail. 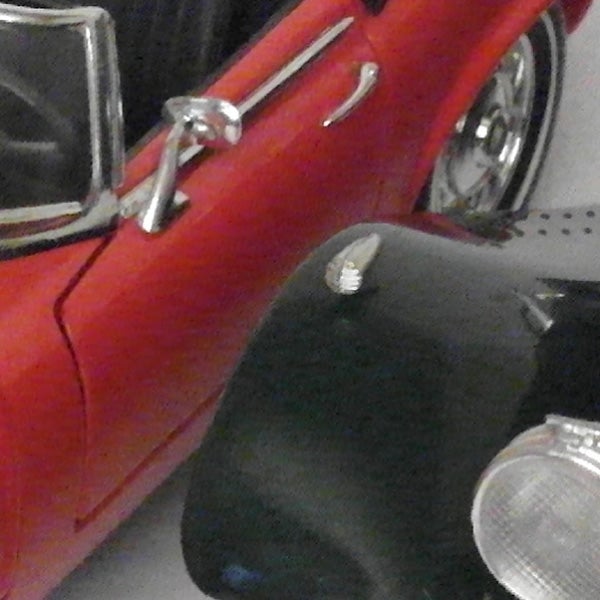 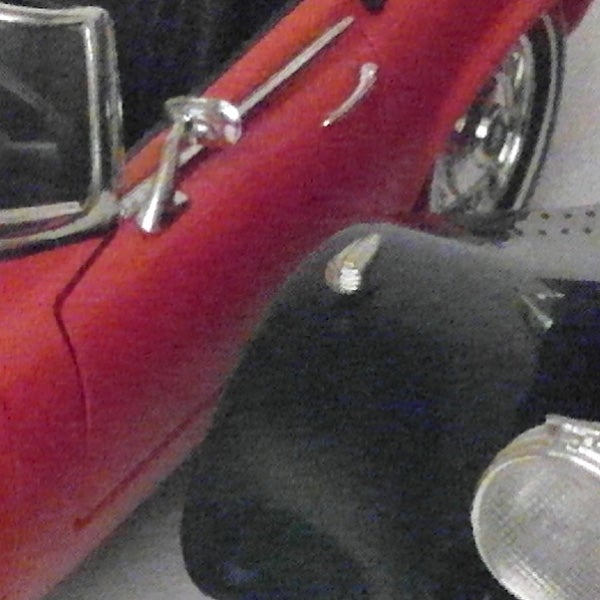 At 3200 ISO there is very little fine detail left. 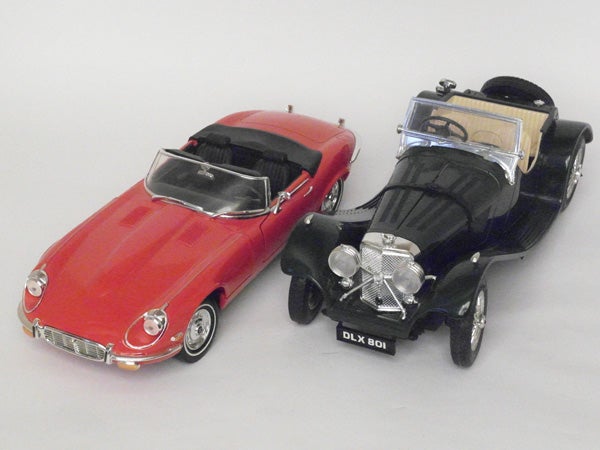 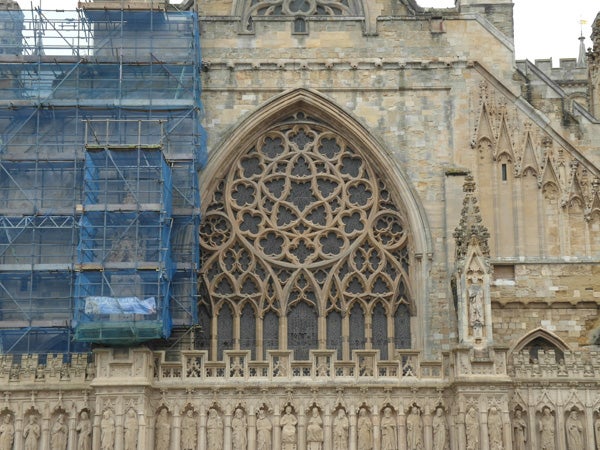 Here’s the usual detail test shot of the West Window of Exeter Cathedral, for you to compare with other cameras. See below for a full res crop, or click to see the whole picture. File size 4.3MB 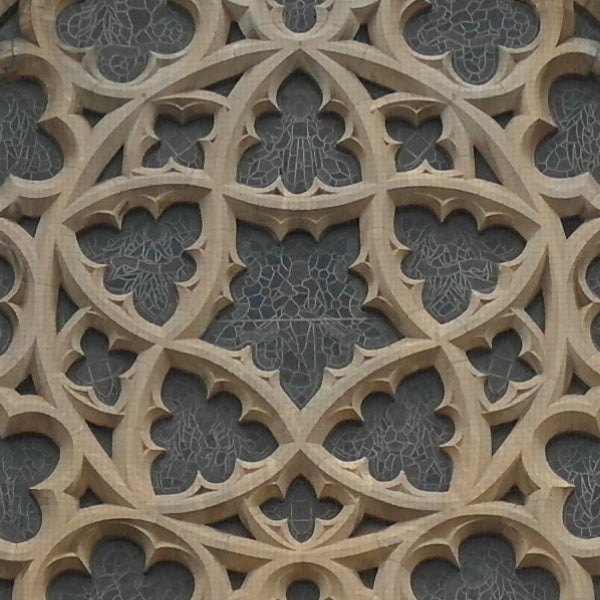 Even though the 72mm-equivalent lens doesn’t zoom in as far as most of our test cameras, you can still see how much detail there is in this shot. 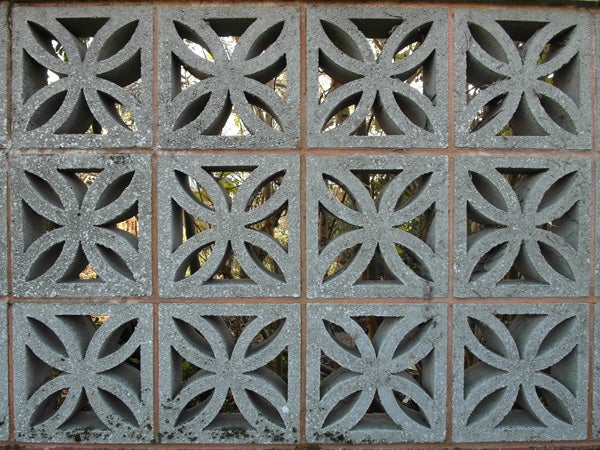 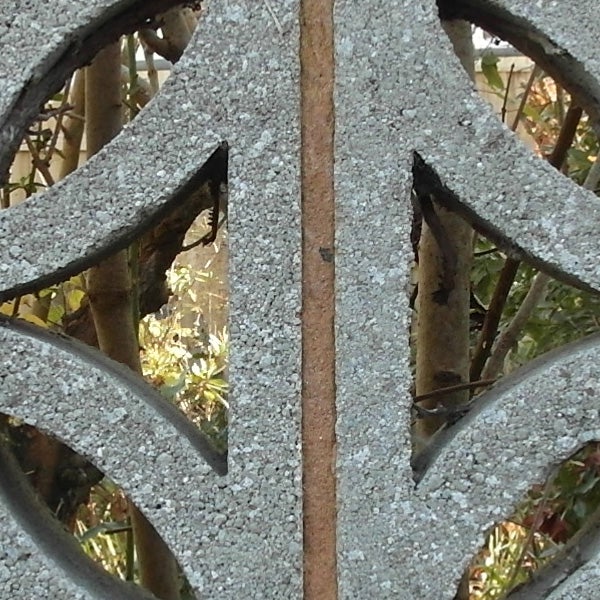 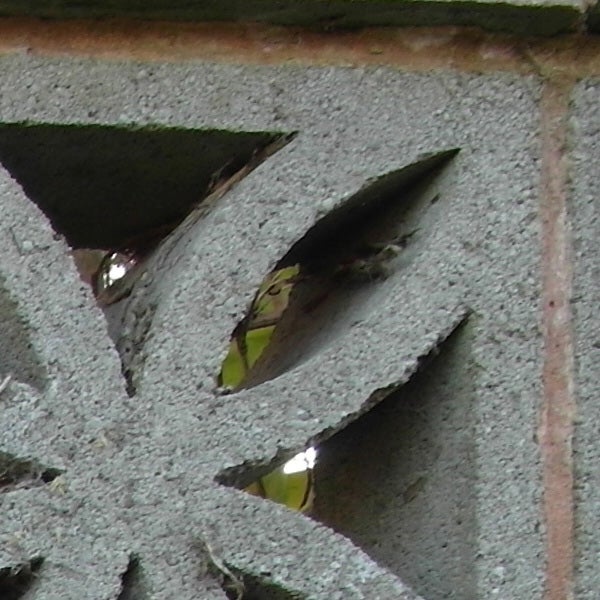 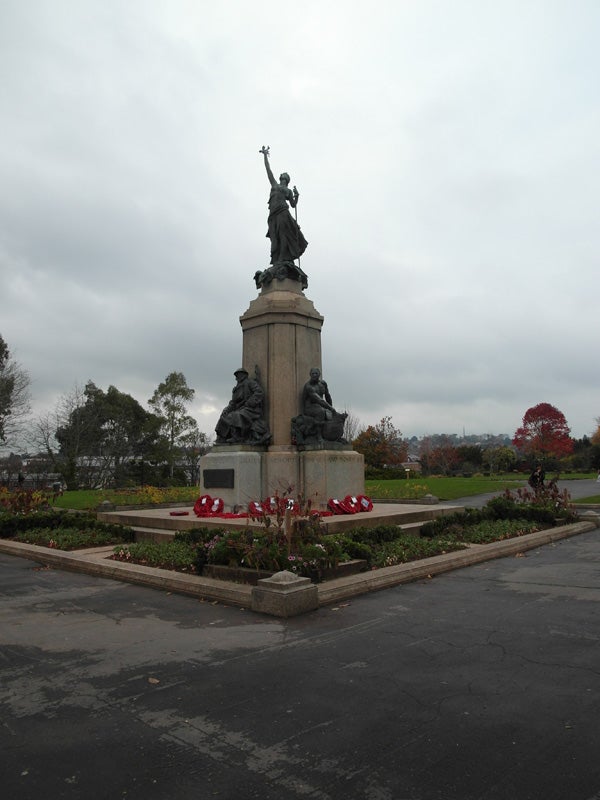 The wide-angle end is equivalent to 24mm 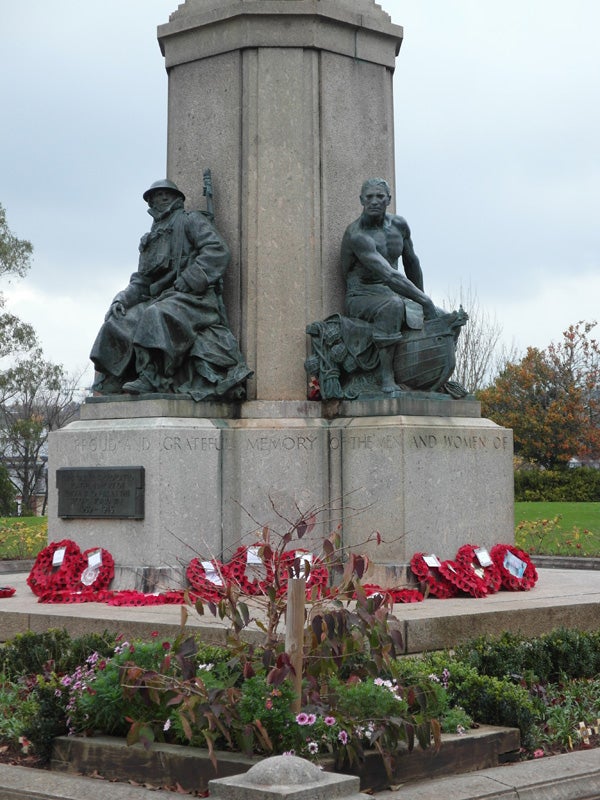 The telephoto end of the 3x zoom is equivalent to 72mm 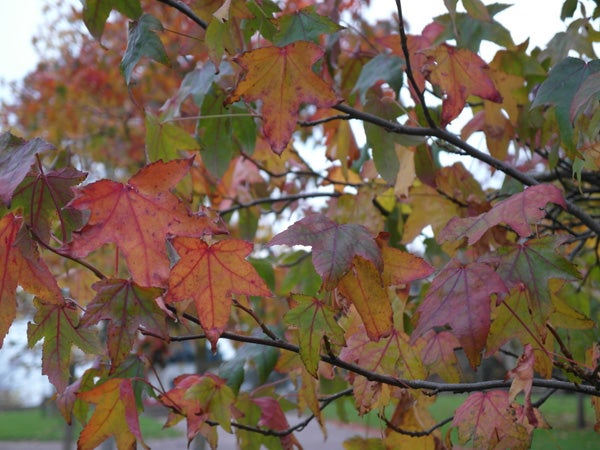 Colour rendition is very natural, even in the dim winter daylight.