The BD-C8500 is a Blu-ray player with a twist. As well as spinning hi-def movies, it can also record programmes from its Freeview HD tuner onto the 500GB hard-disk, bringing you two hi-def sources in a single slimline box. It’s not the first such product to be launched – LG’s HR400 beat Samsung to the punch last year (sadly we never got a sample) – but it’s still an interesting combi that lets you upgrade to hi-def with maximum convenience and minimum clutter.


On the outside, Samsung lives up to its reputation as the Gok Wan of home cinema with a typically exuberant design. Gloss black from top to bottom and measuring 430(w) x 61.5(h) x 300(d)mm, the deck is sleek and sexy, while the undulating white lights that shine through two windows on top are pure eye candy. The fascia features a row of illuminated touch-sensitive buttons covering the most-used functions, and a central display switches between the time and current channel number. It’s very attractive, and because you’re getting two machines for the size of one you’ll end up saving space in your AV cabinet too.

Also on the front panel is a small flap that conceals a USB port for digital media playback and a common interface slot, which comes as a pleasant surprise. That means you can add pay TV channels like Sky Sports to the line-up.


On the back you’ll find a fairly basic array of sockets, but with everything you need integrated into the box, this simple line-up of sockets is hardly surprising. There’s an HDMI v1.3 output of course, and an Ethernet port to take advantage of the Profile 2.0 deck’s BD Live functionality. You’ll also find optical digital audio, component and composite outputs, as well as RF input and loopthrough sockets.


The huge hard-disk provides 136 hours’ worth of hi-def recording time. There are no recording modes to trade off picture quality for extra recording time, but with 500GB of space that shouldn’t be an issue. The disc drive is for playback only and not recording, so you can’t internally archive programmes from the hard-disk, and with no Scart outputs there’s no easy way of making back-up copies on external recorders either. This has been conceived as a simple, self-contained PVR that plays Blu-ray discs, and that sort of simplicity is undeniably appealing.

But Blu-ray playback and HDD recording are just the tip of the iceberg. As is usually the case with Samsung products, there’s a wealth of networking features on board, which can be accessed very easily using the built-in Wi-Fi adapter. You can stream music, video and photos from networked PCs using the AllShare feature, or access a wide range of web applications through Samsung’s Internet@TV feature. We’ve talked about these excellent features many times already, but it’s worth noting that they’re easy to set up and implemented here with the same slickness and user-friendliness as the rest of Samsung’s current Blu-ray products.


The BD-C8500 also supports an extensive range of digital media types, including the increasingly popular MKV and DivX Plus HD formats plus MP3, AAC, WMA, AVCHD, WMV, 3GPP and JPEG. As for Blu-ray, it decodes Dolby TrueHD and DTS HD Master Audio, as well as sending them as bitstreams from the HDMI output.


There are plenty of other features to discover, including CD ripping onto the hard disk, the AMG Metadata music database, 21:9 to 16:9 aspect ratio conversion and 1080p DVD upscaling, but one notable absentee from the feature list is 3D compatibility – that would have been the icing on the cake.

As for the PVR side of things, the BD-C8500 is easy to use, putting a wide range of functions at your disposal. There’s a good-looking eight-day EPG, but because it tries to squeeze a lot of information into a tight space you can only see six channels at a time. Live TV plays in a box at the top, next to a brief description of the selected programme. Despite being a little cluttered, the modern-looking fonts and nice use of colour make it easy on the eye and easy to decipher.

In fact, the deck’s onscreen presentation is excellent across the board. The main menu, for example, uses sharp, full colour graphics and large icons, giving it a very welcoming feel. From here you can access any of the deck’s functions – like Internet@TV, music, photos and Blu-ray playback – or change the device using the red key and explore connected USB devices or PCs. The Recorded TV menu sports gorgeous graphics, giving it a very stylish appearance. It lists recordings with the full name, a thumbnail, duration and date, plus the list can be sorted in the style of your choosing.


From here you can edit individual recordings – the available options are rename, split and partial delete. It’s a shame, however, that there’s no series link option, which should be a vital part of any Freeview recorder feature list. It means programmes have to be scheduled individually, which is easy enough to do from the EPG but feels like a step backwards. 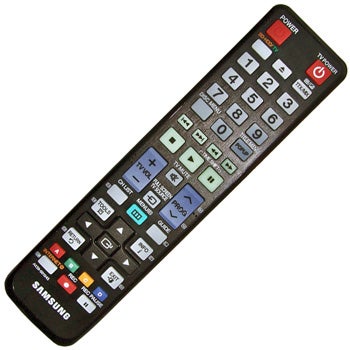 The single Freeview tuner is another limitation, as it means you can’t change channel if a recording is taking place, and even more galling is that when a programme is being recorded you can’t access any of the deck’s other functions – even the EPG, which is madness. You can, however, carry out tricks like pausing live TV and watching a programme from the start while it’s still being recorded – although to do the latter you have to hit the ‘i’ button and skip back, which is an unusual but effective way of doing it.


The onscreen programme banners are attractively presented, and don’t limit you to now and next information. You can search the entire channel list and check out what’s on days in advance without having to enter the full EPG. The display is also packed with colourful icons, telling you everything you could possibly need to know about the current programme – resolution, aspect ratio, audio description, genre and audio format to name but a few.


Also impressive is the remote, which uses large, rubbery buttons, all distinctly separated out and clearly labelled. Despite the wide array of functions it has to cover, it doesn’t feel cluttered or fiddly at all. Great work.

While watching Freeview, channel changing is very quick and it’s also quick to load digital text. As for picture quality, studio-shot high-definition programmes like ”Alan Carr Chatty Man” and ”Strictly Come Dancing” boast that dazzlingly sharp and shiny look that makes hi-def so irresistible. Meanwhile, dramas like ”Accused” on BBC One HD are reproduced with amazing depth and density. Colours have a natural, nuanced look about them, and skin tones look particularly good. There’s no noise, juddering or other nastiness to sully the picture either.


The great news is that these superb-looking pictures are captured on the hard disk without any perceptible decrease in quality. Detail remains sharp, there’s no digital noise and colours look every bit as accurate as they do live. Standard definition pictures also come up smelling of roses – the upscaling process introduces no artefacts, colours retain their strength and detail is crisp.

A clean bill of health on the Freeview side then, but how does it fare with Blu-ray? A similar prognosis we’re happy to say – ”Watchmen” looks gorgeous, with its bold comic book colours splashed across the screen with striking vibrancy, while sharp detail rendering gives the image incredible clarity. We’re sold. It’s also relatively quick to load discs, firing up ”Terminator Salvation” in well under a minute and ‘Watchmen” closer to 30 seconds.


It also does a terrific job with the other types of media it supports – compressed music and CDs sound clean and well-balanced, while DivX videos play without a hitch and look as good as we’ve seen them.


All things considered, the BD-C8500 is a great idea well realised. It combines two of the hottest home entertainment technologies – Freeview HD and Blu-ray – in a single stylish unit, without compromising on picture quality in either department. We’re also big fans of the feature list, which includes modern must-haves like DLNA networking and Internet access, plus the operating system is top-notch. It’s just a shame that the recording limitations and lack of series link make it feel a lot less flexible than ‘dedicated’ PVRs.