What is the Samsung ATIV Q?

The Samsung ATIV Q is a new convertible tablet hybrid which, not content with being able to take on various forms, runs both Windows 8 and Android operating systems.

The Samsung ATIV Q runs the risk of feeling cluttered and clumsy, but Samsung promises the two distinct operating systems are individually hosted but provide strong, seamless file and data transitions work together well, quietly and behind the scenes.

Convertibles have been threatening to push a new forge in the tablet and notebook scenes for some time; can the Samsung ATIV Q finally win the battle for the hybrids? We go hands-on to see for ourselves.

The Samsung ATIV Q’s design is all about the tablet’s many forms. It is a jack of many talents that can take on four different guises (‘tablet’, ‘typing’, ‘floating’ and ‘stand’), and, pleasingly, its master of at least a couple. While the ‘floating’ stance of the screen pointing up on a stork is of little use, the ‘typing’ position highlights the unit’s impressive keyboard.

The Samsung ATIV Q is 13.9mm thick and 1.29kg in weight. Although not slight by any stretch of the imagination, it’s no heavier than rival ultrabooks that the ATIV Q is best compared against. 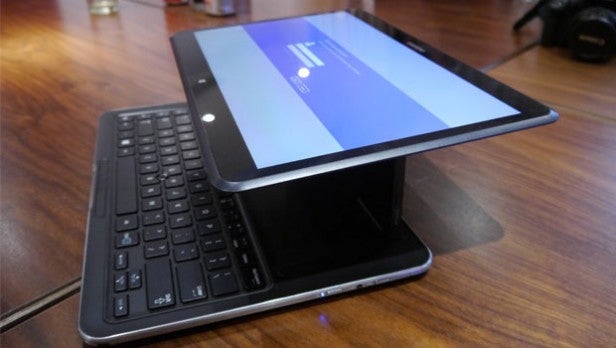 The Samsung ATIV Q’s rather smooth design is broken up by all manner of connection ports, including a single USB 3.0, a USB 2.0 connection, microHDMI and a microSD slot.

The Q’s design is functional more than attractive but, with time, we can see it growing on us and winning us over with its multiple forms and convertible options. 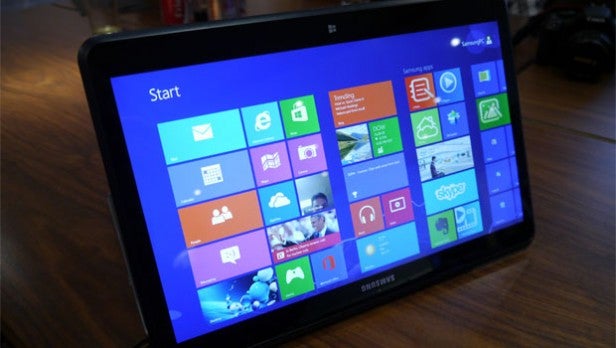 The Q’s screen is vibrant and eye catching on first impressions, with colours proving expansive and with a pleasing level of subtlety. Brightness was impressive in the garishly artificial lighting of our hands-on environment, but will require further testing in a variety of conditions.

A screen to rival those on many ultrabooks, the Q’s display features strong viewing angles and its touch panel proved responsive and accurate during early tests. 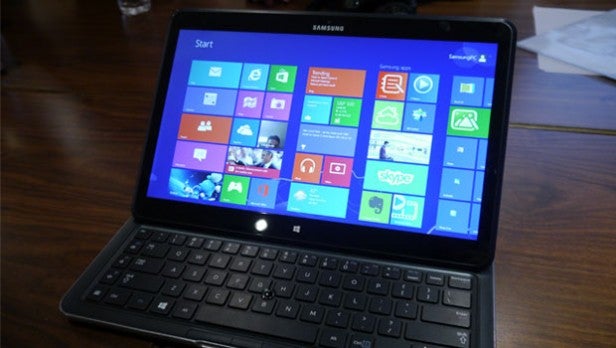 The Samsung ATIV Q is a powerful hybrid device. With an Intel Core i5 processor at its heart, the Q also features backing from Intel 4400 HD Graphics and 4GB of RAM.

Windows 8 makes a good foundation for the Samsung ATIV Q, with Android present to provide some much needed glamour. Sadly, Samsung’s TouchWiz UI is missing, leaving plain old Android to hold the fort. Keeping things running smoothly across the two platforms, Android apps can be pinned to the Windows 8 homescreen, creating seamless shortcuts between the two content levels.

The Samsung ATIV Q’s performance is further enhanced with SideSync compatibility, letting you use your smartphone as a second screen. This requires further testing before we are able to pass judgement.

With a 128GB SSD providing ample storage, the Samsung ATIV Q claims a 9 hour battery life. We were unable to test this claim during our hands-on and so will take a further look in our full ATIV Q review in the near future.

The Samsung ATIV Q is a mixed bag of tricks. Slightly too chunky to work as a designated tablet, the additional convertible options are a serious boon to its credentials. Similarly, while the need for both Android and Windows 8 OSs might not be felt by many, it helps separate the Q’s business and pleasure attributes. The Samsung ATIV Q is, in short, an interesting device which we are intrigued to spend more time with.