I know what you’re thinking: it’s a Wii conversion of an old Dreamcast classic featuring monkeys playing maracas to the strains of The Macarena. Really, what’s not to like? 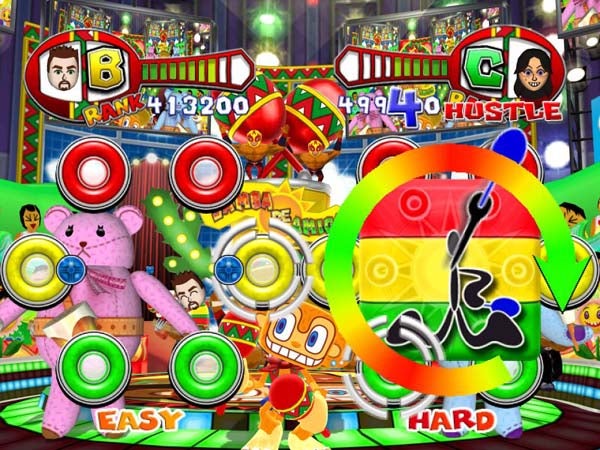 Well, there is something actually, but we’ll come to that a little bit later. First, I’d just like to make it clear that this is, in all but one vital respect, a great example of how a classic game should get the Wii treatment. It helps, of course, that Samba De Amigo was practically designed for the Wii even though it arrived in the days before the Wii was invented. An early example of the rhythm action game, it shipped with a pair of plastic maracas for you to shake.


In front of a gang of weird dancing animals on the screen you have a set of six circles: two high, two medium and two low. As a latin-tinged track played you had to follow the beats going to each circle, shaking the relevant maraca high, medium or low as instructed. To mix things up a little, the game also threw in poses, where you had to stand with the maracas pitched at particular angles in answer to an onscreen prompt. Basically, it was the sort of game that was best played with small children and easily embarrassed relatives or with friends after sizable quantities of alcohol. You could say much the same thing about WarioWare: Smooth Moves or Wii Sports today. 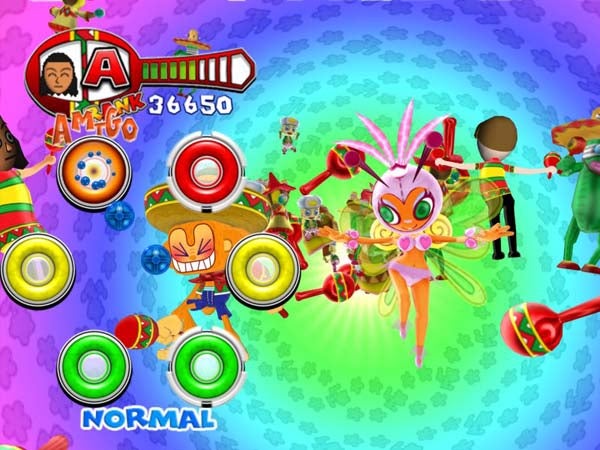 Barring the swapping of the maracas for the remote and nunchuck the Wii version doesn’t deviate much from the basic template, instead adopting a selection of thoughtful enhancements. For a start, the Hustle mode introduced in the Samba De Amigo ver. 2000 release (never released on Dreamcast over here) has been incorporated, adding dance moves to the shaking and posing action. Pose-style prompts now appear, but this time you’re expected to wave your controllers in a set pattern in time to the music. This makes the game a little more athletic, and also ensures that you look even more of a plonker playing it than you might have done previously. Believe me – that’s saying a lot.

On top of the basic single-player game and new training and career modes (the latter a fairly basic complete stages to unlock extras affair) we also get a selection of multiplayer mini-games. Some are familiar, some new or extensively reworked. The Guacamole ‘whack-a-mole’ game (get it?) is back, along with the battle game where you compete through a stage to knock out your opponent. The bizarre love mode also returns, with two players scoring big for keeping their shaking, posing and dancing in sync, and so earning a kind of ‘love’ grade. Be careful, kids: you shouldn’t make or break a relationship on this sort of thing. 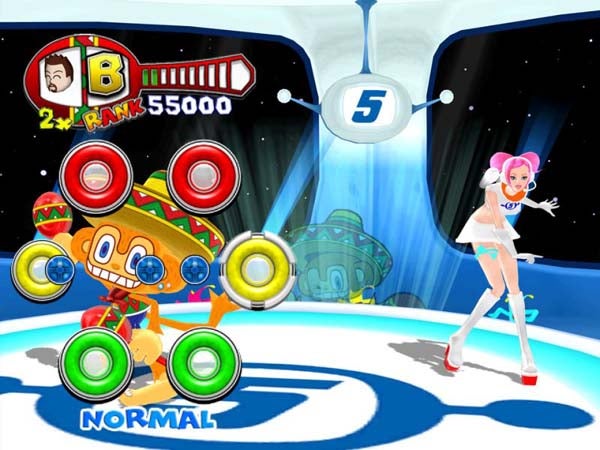 More Wii-focused efforts include a mildly horrible version of volleyball where you try to flip the ball over the net using a remote-guided onscreen hand and a power rush mode where you shake the remote with a kind of crazed vigour to wipe out little faces that appear in the circles. The modes and mini-games are mostly good fun, and there’s even a nice new dance mode that puts the focus on the hustle moves, not the shaking. 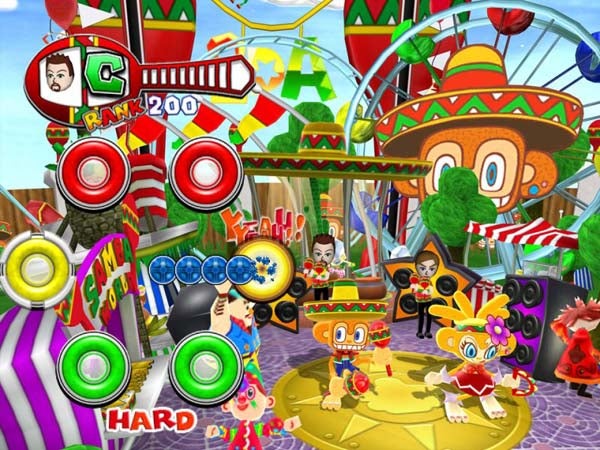 All of this has been dressed up in a lovely, sensitive graphical makeover that does nothing to detract from the weird but lovable look of the original. Samba De Amigo’s angular approach to the traditional cutesy Sega style has weathered extremely well, and the development team at Gearbox has concentrated on improving the lighting and making the characters and backgrounds smoother and subtly more detailed, much as Sumo Digital did in Sega Superstars Tennis. It’s unlikely that you’ll have much time to look at the background scenery unless you’re spectating, but from amusement parks to street carnival scenes there’s always a lot going on behind the action. Samba De Amigo was always full of the exhilarating OTT silliness of classic Sega games, and this update has certainly preserved that. And like Sega Superstars Tennis it seems imbued with nostalgia for Sega’s history and the Dreamcast era, with new stages featuring Sonic and Ulala from Space Channel 5 as if to prove it. 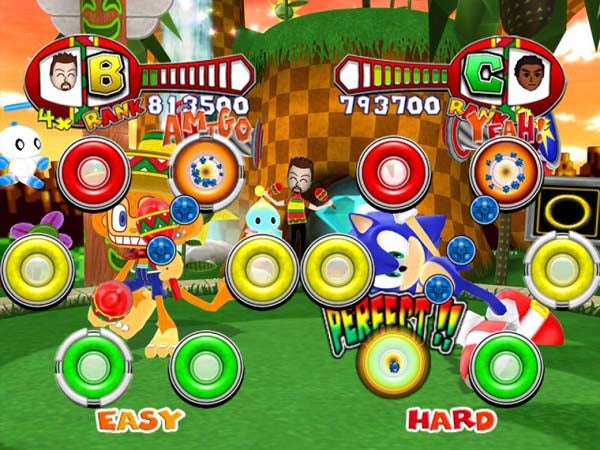 And it’s while you’re checking out the backgrounds that you might notice another of the Wii version’s plus points: the integration of Mii characters. Not only do you play as your Mii, you’ll see other Miis grooving away in the background as you play. Who knew my father-in-law could get down to the Mambo beat?

But at the end of the day Samba De Amigo on the Wii isn’t an unqualified success, and it all comes down to the controls. Gearbox has obviously tried hard and a calibration routine before play starts does help, but the game seems very sensitive about where and how you hold your remote and nunchuck. Early on your humble reviewer and family struggled to get the game to recognise shakes in certain positions, while specific poses or hustle moves soon filled us with incomprehension. What were we doing wrong? Why wasn’t that shake recognised? Why is the indicator over there when I’m shaking over here? After much trial and error we found that sitting down and moving the maracas in smaller, more controlled movements delivered better scores, but – frankly – Samba De Amigo shouldn’t be that sort of game. You should be able to stand up and wave your arms in the air like you just don’t care. And the sad fact is, you can’t. 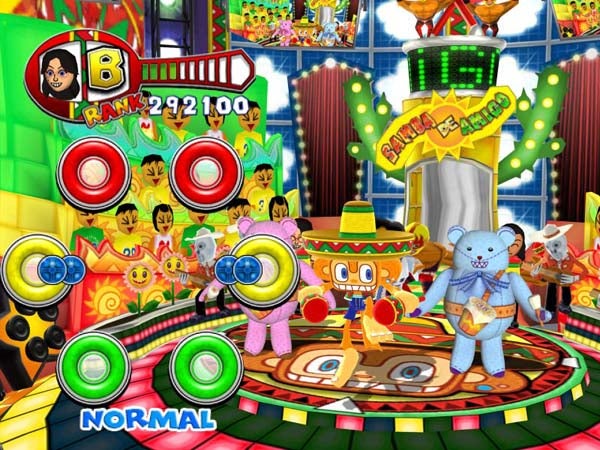 This isn’t a total deal breaker, but it does mean that Samba isn’t quite the party game it should have been. The other thing that holds it back a little is the track list. The classic Samba and Latin tracks are still cool, of course, and old Samba De Amigo favourites like Chumbawumba’s Tubthumping and the Theme from Rockey still work well. However, while Wii Samba has 23 all-new tracks they don’t really bring the game into 2008. Santana’s Smooth? Lou Bega’s Mambo No. 5? Dee Lite’s Groove is in the Heart? We can expect some more modern hits from future downloadable content packs, apparently, but it would have been nice to see some suitably Samba-ised versions of current songs right now. 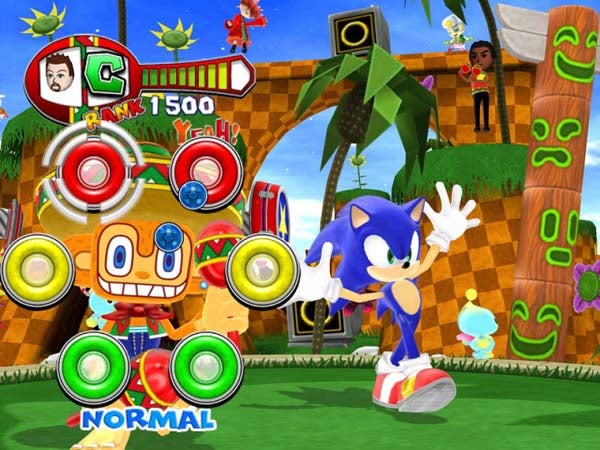 This is still one of the best Wii titles to appear in months, but that’s probably saying more about the current state of Wii software than the quality of this particular game. I suspect Samba De Amigo will delight a few families and make the odd drunken party go with a swing, but I also suspect that old Samba addicts will come away feeling just a little bit let down. It’s hard to blame Gearbox – I’m sure the team did their best with the controllers – but Samba De Amigo Wii hasn’t quite got the old shake, rattle and roll.


In many respects an excellent update, Samba De Amigo falls down because the controls just don’t work as well as they should. Still fun, but not a party great of Singstar or Guitar Hero proportions.