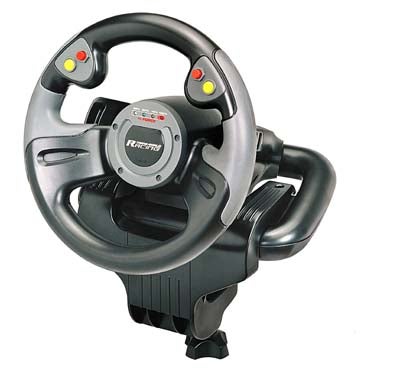 The humble driving game; a staple of arcades and home entertainment for almost as long as bats and balls and invading alien hordes, games designers of the past certainly knew their stuff. First Pong satisfied our obsessive need for ball games, then Space Invaders satisfied our blood lust, before games like Sprint fed our unquenchable desire to go really, really fast. And even in the very earliest days of computer racing these cabinets came with mounted steering wheels. The type you could spin in frustration as your sprite based car reared off the track for a final time swallowing your money for good. You see, even thirty years ago at the dawn of the computer gaming era they knew what we know now: steering wheels make racing games better!


It seems strange to me then that despite the need for proper controls on arcade based driving games, steering wheels for the home market have not really caught on as much as they should have. Maybe their size put people off, or the need to clamp them to a desk, making their spontaneous use less appealing than sticking with your trusty gamepad. More likely, it was price. In the past it was not uncommon to splash out over £100 on a decent steering wheel and set of pedals, and even though prices dropped to around £80 for the stylish Thrustmaster Enzo steering wheel we reviewed last year, quality for offerings in the sub £50 bracket have been seriously lacking, until now.


With the R440 Force Feedback Wheel, Saitek has busted open the doors to affordable racing fun. Its metallic and black design is clean and, to my eyes, quite appealing. The garish red and yellow wheel mounted buttons may diminish the effect, but not drastically. The foot pedals, though less impressive, look fine and the whole thing seems to have been fashioned from a retro-future that brought us Cylons and Knight Rider. In fact, there is even a glowing line of red LEDs that swish from side to side when you turn the wheel so the parallels could be more than whimsical speculation.


In operation it is just as good as it looks. Build quality is paramount with any game controller and with the R440 this is definitely up to scratch – nothing feels like it’s going to buckle should you stamp on the break and wrench the wheel in the middle of a 150mph street race. Like the Thrustmaster Enzo, the clamping mechanism does come as a separate part from the wheel itself but the way it fixes the wheel to the desk leaves you in no doubt that the R440 is rock solid. 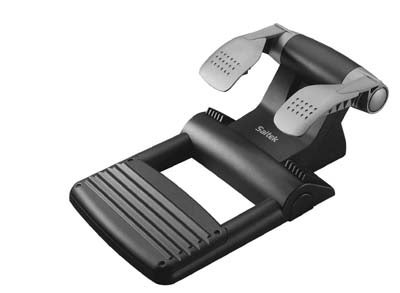 By contrast, the pedals do look like the poorer part of the package but their spring is excellent and the long base is designed for you to rest your heels so you get none of the slipping that was evident in Thrustmaster’s Enzo.


Force Feedback on the R440 is also top notch. Games such as Need For Speed Underground 2 and Colin McRae Rally 2005 feel spectacular as not only road surfaces and impacts, but also acceleration, changing gear with the paddle gearbox and heavy breaking are faithfully simulated. Should you not like the feedback in any particular title Saitek’s software will allow you to adjust the sensitivity of the R440 independently in Windows.


Ultimately, the biggest compliment I can give the R440 is that it’s quite simply fun to use. The fact that I spent close to two hours just ambling around the Free Ride section of NFS Underground 2, exploring the city, looking at the scenery and rarely driving flat out gives some suggestion as to its immersive qualities. It felt like going on a relaxing drive, and I have since used the R440 a couple of times to cool off after long and frustrating days, instead of jumping in my real car to do the same job. If nothing else, it has already saved me petrol money.


Of course, some things could be improved upon, there could be more buttons on the steering wheel or a directional pad like the one seen on the Thrustmaster Enzo; perhaps the pedals could be slightly heavier or the USB cable a little longer, but to dwell on these aspects would miss the point of the R440. Saitek has produced a little gem of a product here, and for the great majority of us racing fans with more sense than money, we would be fools not to pick one up.


Cheap, well built and fully featured, three phrases that don’t normally go together. The R440 should be in the home of every racing fan on a budget, and I for one am off for another spin.