What is the Russell Hobbs Steam & Clean RHSM1001-G?

Budget-busting steam mops don’t get much more affordable than Russell Hobbs Steam & Clean RHSM1001-G. Available for well under £50, this 1400W steamer is ultra-lightweight, with simple controls and a good size, corner-friendly mop head.

The Steam & Clean is easy to manoeuvre, has a decent-length cable and delivers reasonable steam cleaning at the price. It isn’t as easy to fill, floorhead steering is limited, and the carpet glider simply doesn’t work. But, hey, at less than £50 it does indeed Steam & Clean. 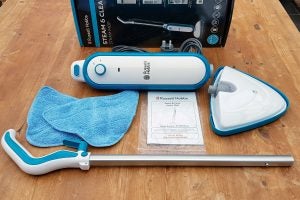 Unpretentious, simple and lightweight, the Russell Hobbs Steam & Clean RHSM1001-G is a bargain-basement steam mop. At just 1.6kg dry it’s properly featherweight, but offers a decent 1400W steam heater, good-size mop head and an impressive 7.9-metre cable. Since cable length is an area many budget brands cut back to 6 metres or less, the RHSM1001-G offers one of the best cleaning reaches at this price. 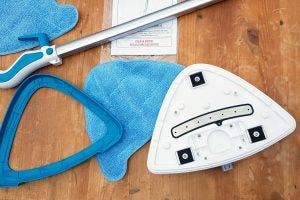 For storage, the cable can be wound up onto the handle hooks. The upper hook pulls out and rotates, so you can easily drop off the coils of cable quickly. The cable clip feels very flimsy, though, so there’s no latitude to be heavy-handed here. The handle and pole clip in and out of the body fairly easily so it’s easy as pie to pull this mop apart for compact storage.

To keep things compact in use, however, the RHSM1001-G’s tank holds just about 350ml, or 0.35 litres. That’s small, even by hand-held steam cleaner standards and will limit steam run-time. Russell Hobbs suggests around 15 minutes before you need a refill. 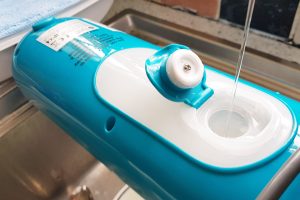 Operation couldn’t be simpler: fill, plug-in, switch on. There’s no trigger switch or variable steam control here. Simply tilt the machine back from upright and its starts steaming. Clip it back upright and it stops.

You can further turn it on and off from the front dial, or it automatically shuts down when the tank is empty. The only warning of that is the front indicator light going out, which I failed to notice. So you may go on for a little while before realising you’ve run out of steam, quite literally. 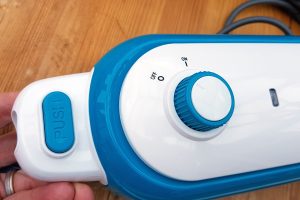 The floorhead is a decent size and triangular for navigating into tighter spaces and room corners. Its neck is tilt-only, however, so don’t expect to achieve any Strictly-quality pirouettes or turning manoeuvres on the floor. 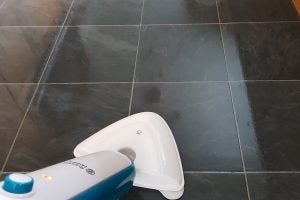 The mop pad attaches via three small hook and loop pads, with a little excess material near the back to aid removal. Two mop pads are supplied, and more are available from RH’s excellent Customer Services department direct. 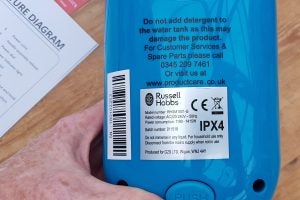 If you fancy giving your carpets a steaming, a plastic frame is supplied that clips on over the pad and floorhead. This allows it to slide more easily over carpets and rugs. 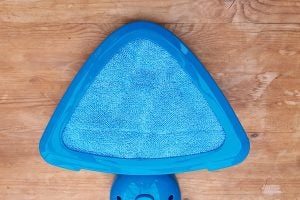 Simplicity is a key feature of this budget Russell Hobbs steam mop, but simply filling it was more of a challenge than we’d expected. A small jug is supplied for the purpose, but it does mean pouring into a vertical opening. The chance of a spillage is high. 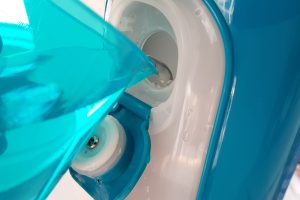 Not so cleverly, the ‘Max’ fill line is also obscured by the filler cap when open, so you have to guess when to stop anyway. 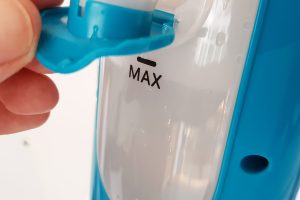 If you lay the mop down to fill with the jug or tap, you have even less idea when it’s full, with over-filling is all but guaranteed. Suitably filled and the stopper replaced, the RHSM1001-G is ready to go.

From plug in and switch on it was just 15-20 seconds before the unit hissed into steaming life, with the first few wisps emerging from the floor pad. An amber light on the front lets you know when it’s ready; it goes out when it shuts off, either using the control knob or automatically when it runs out of water. 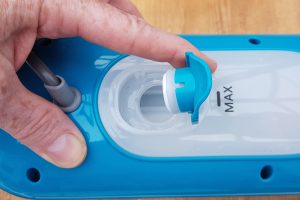 Tilt back and the hiss becomes a rush of steam. The floorhead’s line of steam vents is a fair bit smaller than the width of the pad, and the limited number of vents does rather make the steam sound a lot more capacious than it really is. It took a minute or so for the steam to properly damp the whole pad. 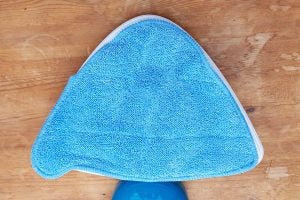 Heading off across the room, the mop’s light weight is a little offset by friction from the floorpad. We assume this is down to the type of material used, but it seemed to take a little bit more of a push than other cleaners we’ve tested. Manoeuvrability is also a little restricted by the tilt-only head. Back and forth is no problem, but tight turns and corners require a fair bit of wrist input. 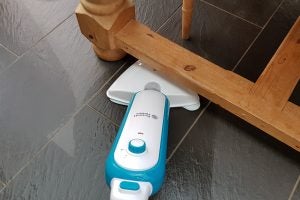 Yet once up and running, the little RHSM1001-G gets into its stride and you can cover quite a bit of floor before its tank runs dry. We were getting around 13 minutes of cleaning on a full tank on a hot summer day. Since it only takes 20 or so seconds to get back up a head of steam after refill, the tank size isn’t really the issue. It’s still going to take some practice to fill, though.

Cleaning performance on riven tiles was fairly good. Don’t expect grime such as spilt-tea stains and mud to be blasted off in a single pass, but a few repeats over these areas delivered up a clean and not too damp surface. Once dry, the surface did show a few brush-mark water lines, but not too many. 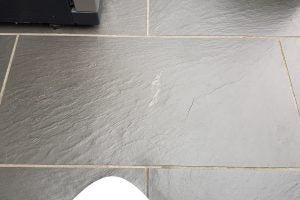 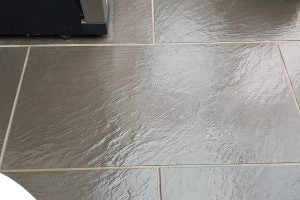 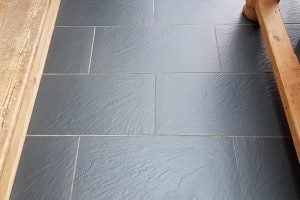 The head glided much more smoothly over laminate, and the limited amount of steam would give us the confidence to use this cleaner on un-sealed laminate. Cleaning up tough kitchen spills again took a few passes, but the end result was a clean surface that dried quickly. Again, we could see some water streaking marks if we looked closely – but we did have to look super-close. 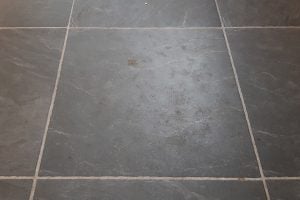 A wipe over the area with a damp cloth afterwards revealed that all wasn’t 100% buffed, however. 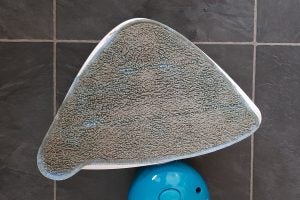 The cloth has limited pick-up abilities and despite going over the square of tile shown a number of times, dirt could still be picked up afterwards. Clearly, the RHSM1001-G’s hard floor cleaning performance is reasonable rather than exceptional; it’s okay for a quick wipe-over. 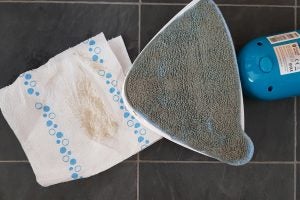 Moving onto a test rug and things went seriously pear-shaped. The frame that allows the head to slide over carpet doesn’t clip on firmly. The head simply sits into the frame and that means as soon as you lift the cleaner, run over a carpet-edging strip or even turn a bit rapid, it falls off. 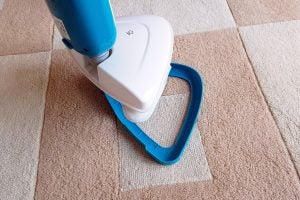 A quick test of its rug-cleaning abilities became frustrating to the point there was no danger of us trying to tackle a whole room carpet with the RHSM1001-G. Moreover, the Russell Hobbs simply doesn’t produce enough steam to power vapour into the pile, so its carpet abilities are no better than wiping with a warm, damp cloth.

Persevering and going over the rug a few times revealed very little dirt pick-up on the mop pad at all. Okay, let’s just stick to this one for hard floors then. 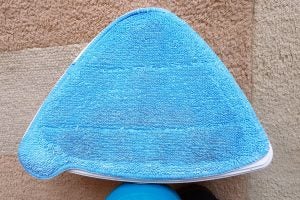 If you’re looking for a cheap and cheerful steam mop for hard floors then the Russell Hobbs Steam & Clean RHSM1001-G isn’t a bad choice for laminates, tiles and lino. Its hard-surface cleaning abilities are limited by so-so steam pressure and cheap mop materials, but it’s very simple to use and has good reach thanks to an unusually long cable.

Its nicely lightweight, but that doesn’t translate into speedy manoeuvring due to mop friction and the lack of pivoting head, which makes turning a bit of a chore. It isn’t a steam cleaner for carpets either, since the glider falls off and it lacks steam pressure to lift dirt from the pile.

Thankfully, its cheap-as-chips price takes the edge off its foibles.