The Russell Hobbs Allure 18623 is a very straightforward manual espresso machine that trades away smarts and automation to produce something that takes all of about three minutes to get to grips with.

For an early-morning fix, the Russell Hobbs Allure 18623 puts few hurdles between you and getting the caffeine in your veins. We like its tactile manual controls, which offer a good deal more physicality than the touch-sensitive buttons often preferred by pricier machines.

However, there are a few issues with the Allure 18623’s operation and build that show its design is less than perfect, especially for more serious coffee lovers. 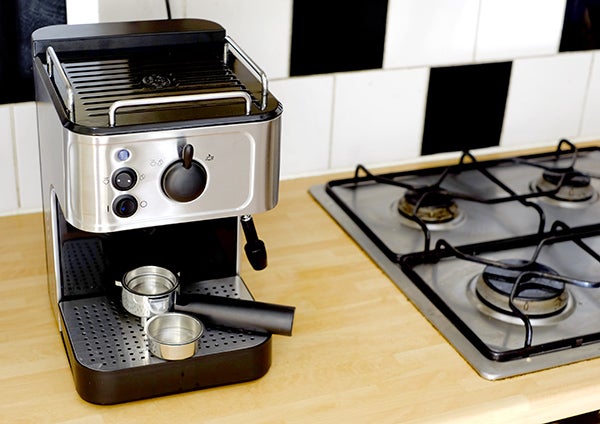 A great many of the espresso machines we review try hard to offer strong style as well as strong coffee. However, the design of the Russell Hobbs Allure 18623 is a bit more practical.

While it has a professional look, it’s more that of a suburban London greasy spoon that does cracking coffee than a cod-Italian coffeehouse where every drink has a try-hard foreign-sounding name. Its curves are light, not running away from the basic rectangular block that’s under all the gloss of most coffee machines.

The benefit of the Russell Hobbs Allure 18623’s workmanlike style is that it’s a good deal less wide than most, making it easier to fit into smaller kitchens. 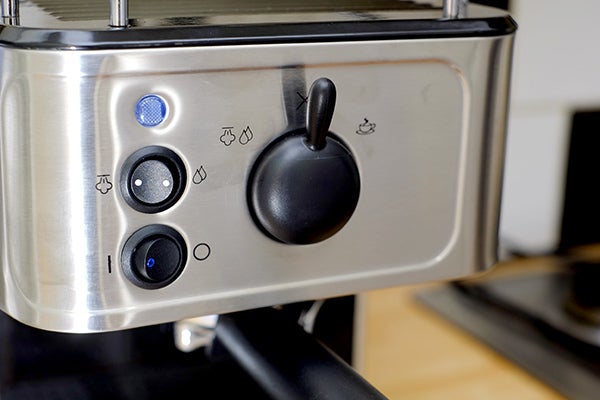 We like to think of the Russell Hobbs style as a no-fuss approach, but that hasn’t led to a basic plastic construction. The Allure 18623 is coated in a layer of stainless steel that may highlight any strains, but makes them dead easy to wipe clean, too.

The rest of the machine is black plastic, effectively giving this coffee machine two-tone colouring.

Its features are fairly standard, too. The dual-nozzle coffee holder locks in entirely manually, with no spring-loaded mechanism to bring the holder around to the centre to make serving two coffees at once easier. Despite this, we found that generally the Russell Hobbs Allure 18623’s nozzles end up in the centre anyway – with no ‘auto tamper’ to the mechanism it merely stops when it hits the centre. If it doesn’t, it’s been overfilled. 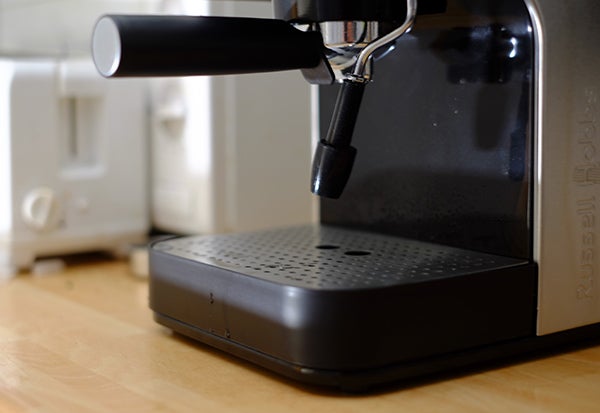 There are two coffee inserts included, used to make either a single- or dual-shot strength of coffee, and you’re meant to manually tamper down the grounds before inserting the portafilter. A basic plastic tamper comes included with the Russell Hobbs Allure 18623, but if you’re going to be using the machine several times a day you may want to upgrade to a sturdier one. 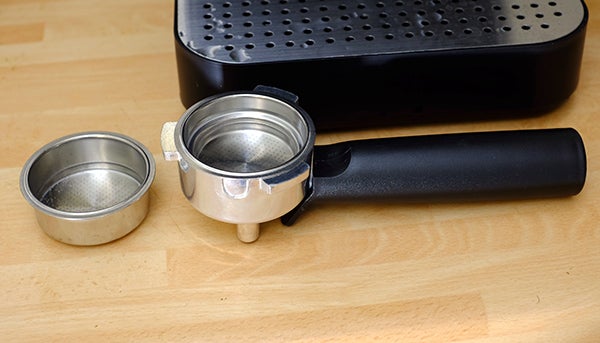 Loading coffee is where we find one of the Allure 18623’s first niggles. Switching between the shallower and deeper coffee holder inserts is a rather fiddly, awkward process. Inserting and removing them feels a bit too stiff, and you really need to get your fingernails involved to remove the things. Some of you may be happy with keeping the one insert in indefinitely, but it’s not good news if you don’t.

One of the elements we like most about the Russell Hobbs Allure 18623 is its control style. It’s simple and distinctly old-school, with not a touchscreen in sight.

There are big switches to turn the Allure on or off and to switch between outputting steam and hot water from the frother arm, and there’s a chunky three-position lever that you switch to the right to make coffee, to the left to start the frother. 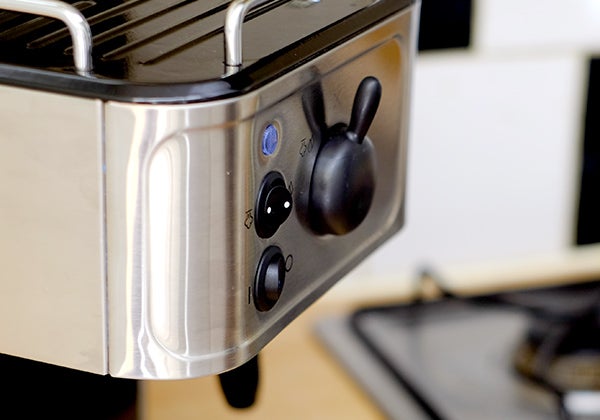 Having such tactile controls both feels great and makes sure you don’t accidentally press the wrong button on a bleary-eyed morning. Of course, compared to a fancier or more automated machine, the actual quality of the coffee is partly determined by you putting and tamping the grounds in the holder properly. The machine also supports ESE pods.

It’s also vital that the water reservoir is in place to avoid making the Russell Hobbs Allure 18623 the noisiest coffee machine in existence – and misaligning the thing is easily done. As part of the set’s space-saving design, the water reservoir is a slim plastic number that takes up the entire rear. There’s a lip-out lid to let you add water without removing it, but otherwise you’ll likely have to reinsert the reservoir ‘blind’. 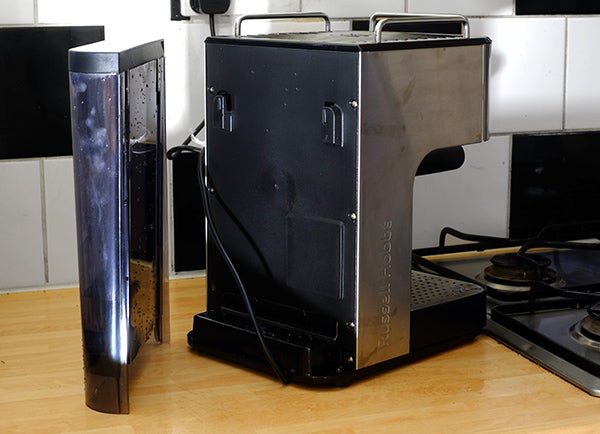 If not inserted properly, it causes terrible vibrations in the Allure and a quite horrible amount of noise. If you’re reading this because of problems with your maker, double check it’s not the reservoir at fault. Even with it in place, though, it’s fairly loud and prone to vibrations – enough to move lighter cups about when coffee is being made.

Still, we did notice a few other little issues during operation. For example, at times water leaks out of the main coffee holder nozzles while the Russell Hobbs Allure 18623 is producing hot water from the frother – not a great sign about the machine’s internal plumbing.

We also found the Allure 18623’s hot water output to be a bit too violent – appearing to be outputting a constant stream but actually doing so in rapid machine-gun bursts – causing your Americano to become a little foamer than is ideal if you’re not careful. The steam output seems to be somewhat unsophisticated too, resulting in a lot of superficial frothiness but not always the velvety texture you’ll want for drinks like lattes. 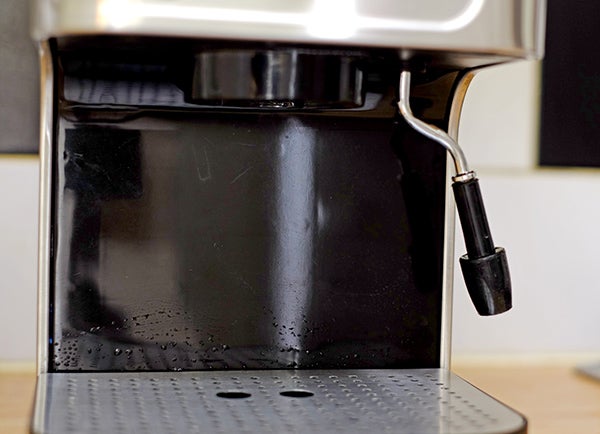 However, the foamer is otherwise reasonable. It starts producing steam fairly quickly, with mostly-consistent output that’ll let you froth up a batch of milk promptly. It is a little noisy, though – if not to the extent it’s a reason to avoid the machine. There’s also a rubbery black extender on the spout you can easily pull off and rinse, designed to make the Allure easier to maintain.

There are no auto cleaning cycles in the Russell Hobbs Allure 18623, though, and we have heard reports of the filter clogging, resulting in the coffee holder’s contents spilling out in a volcano-like fashion. You’ll need to be a little mindful of the machine’s maintenance if you want it to last longer-term. 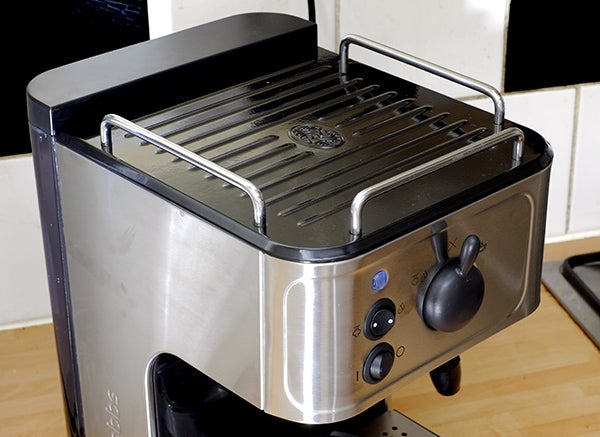 The top doubles as a cup warmer

The eyes-on approach is needed when you’re making the coffee, too. There’s no automatic shut-off, no option to dispense a shot or two and then stop, so you’ll need to stay nearby whenever brewing. If that’s not your bag, you’ll have to spend a little more on a machine with a greater level of automation.

You also need to take note of something that might not immediately be obvious. There’s a light on the front of the Russell Hobbs Allure 18623 that tells you when it’s preparing water. You’ll want to wait for it to finish before getting it on coffee-making duty.

Using the shallower filter, we found that the Russell Hobbs Allure 18623 has a tendency to produce ever-so-slightly weak-tasting coffee. This may have something to do with the particular way water passes through the holder, as we did note at times some unused grounds when producing a short coffee.

The results were better with the deeper filter, not least because it naturally allows you to use a good deal more grounds. 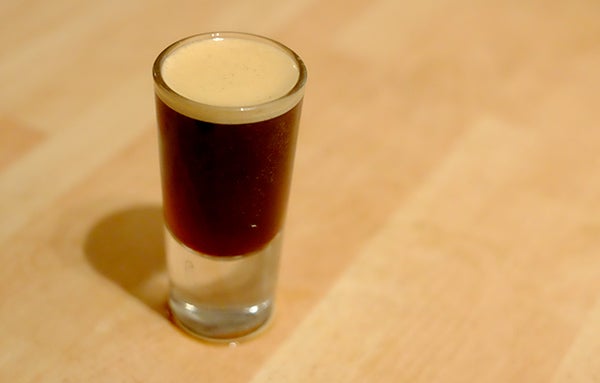 The Russell Hobbs Allure 18623 does produce a crema layer each time, but in our testing it was somewhat inconsistent. Occasionally a little thin, often a little spotty, and yet at time bang on the money with a generous golden-brown crema that we’d get from a much more expensive machine. The coffee was always good, but this is a machine you need to master, and not just in terms of learning the standard skills involved with an espresso machine.

While the coffee produced by the Allure 18623 is good, it is not wholly consistent. And it was often a little on the too-bitter side in out testing, despite using standard amounts of coffee and tamping. Our conclusion is that the machine is very sensitive to the way the grounds are arranged – perhaps too sensitive. 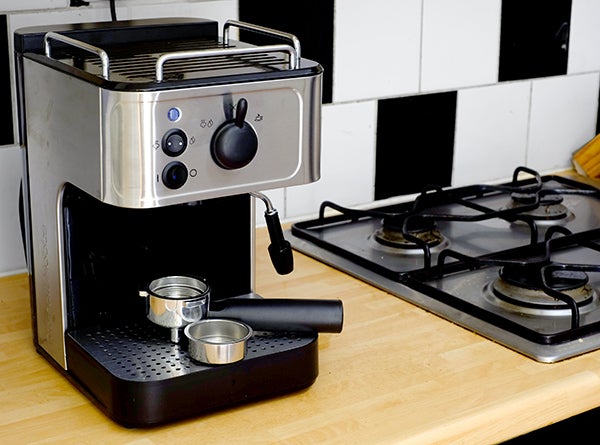 Should I buy the Russell Hobbs Allure 18623?

The Russell Hobbs Allure 18623 is a petite and fairly easy-to-use espresso machine, offering simple controls and a neat design that should fit into smaller kitchens much better than most of the competition. It’s not flash, but its relatively low price and manual controls make it pretty attractive.

However, we do have concerns about its operation, with some odd leaks occurring at times during testing, while slightly inconsistent quality of coffee made it tricky to get the most pleasing results. This is a sound coffee machine, but we think the Krups KP5210 may be a slightly better choice.

The Russell Hobbs Allure 18623 is a solid, convenient coffee machine with just a few leakage and consistency quibbles.