There does seem to be general consensus that Skype is the best thing since Sporks were invented. In our office, people regularly make calls all over the world, both Skype to Skype, as well as Skype Out (to standard lines). I haven’t had quite as much luck, with intermittent performance when trying to contact my parents in Italy. Much of this, I believe can be blamed on NTL and my World of Warcraft loving house mates, but that is hardly an uncommon combination and does prove that you can’t always rely on Skype.


We’ve seen our fair share of Skype phones come in and out of the office, but none of them have quite hit the spot for me. Although the Netgear and SMC have come close, as these don’t require a computer – just a WiFi connection. But these can’t do standard land line phone calls, so you’d be carrying two phones around the house. Although the VoSKY starts to go in the right direction, using a standard telephone for connectivity, this lacks portability and requires connecting to your PC via USB. 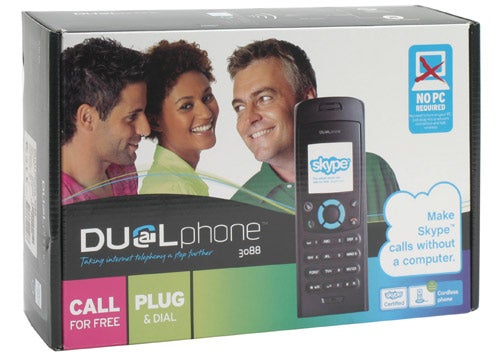 With models as cheesy as the ones above, this phone has to be good – right? The RTX Dualphone 3088 doesn’t require a PC, doesn’t require wireless, and gives you a cordless phone that will place Skype calls as well as standard land line calls. 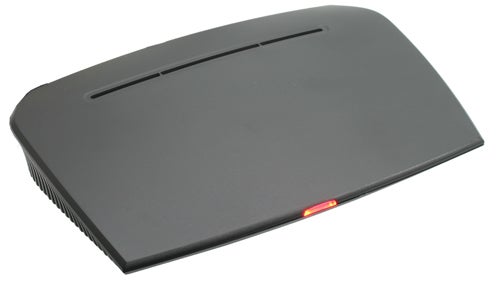 The base unit is where most of the action happens. Into this, you plug in an Ethernet cable which connects to a switch or modern combination router. A telephone cable can also be plugged in (although of course, not mandatory), for land line use. These two reasons mean that keeping this unit near your ADSL router makes sense – as hopefully there is where your phone line connection is, and your corresponding Ethernet connection.


The unit itself uses a Conexant CX8101 ARM processor, which is a fairly powerful CPU that coupled with other VoIP specific processors on the PCB help turn our voices in to that digital stream that costs us so little.


Communication between the phone and the base unit is the standard DECT communication, which has not been used in a Skype phone yet. One of the benefits of DECT is that using a single base unit, you can have multiple handsets. At this stage, I don’t think this is the case for the RTX Dualphone 3088, but it will apparently be added in with a new firmware release.

The second base unit is nothing more than a charger, but the cable is hard wired into it, unlike the communications base unit which has a socket for the mains adapter. If the transformer goes, the whole unit is useless. On the plus side, it uses two standard Ni-MH AAA batteries, so you could always use a standard battery charger should a freak accident damage it. This of course can be positioned anywhere you want within reason – with a range of 50m inside, and 300m outside. 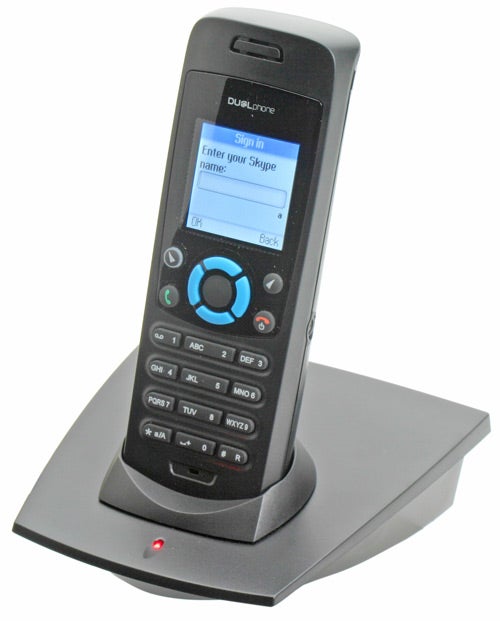 Putting the phone into the base unit doesn’t require any fiddling around, and you can wobble it in every direction and it still maintains contact.


Once the phone had charged, I turned it on. It discovered the base unit straight away and I logged in with my Skype account. However, if you don’t have one, you can sign up with one through the phone itself.


The phone has a good weight that feels comfortable in my hand. After a 30 minute phone call, I certainly didn’t feel any discomfort. After a certain point, any phone will become uncomfortable though.


The buttons have very little action, but there is a responsive click. The menu was quick to respond and easy to navigate. It actually felt incredibly similar to the SMC and Netgear units. I do wonder if Skype has some sort of say in the firmware, or might even be dishing out a reference firmware to companies to modify for their own uses. Incidentally, the firmware can be updated through the menu system without ever having to touch a computer. 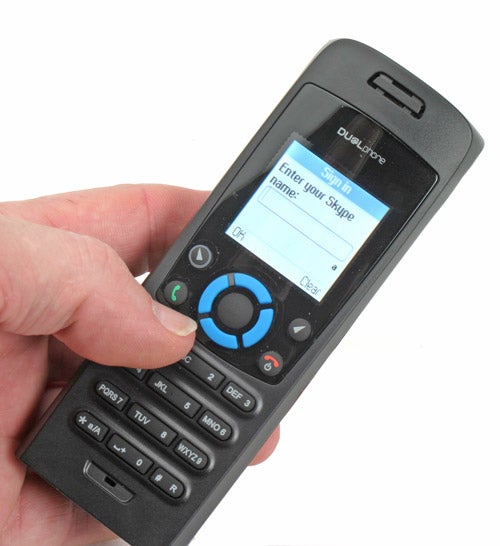 All the menu items have the familiar Skype icons, and all the functionality of Skype can be found. I was however annoyed to discover that it didn’t support Skype Chat. Considering you can enter text using the number pad (much like you would when sending a text message on a mobile phone), I’m surprised the same input method couldn’t have been used for chat. Any users trying to chat with me, were told I had an outdated Skype version that didn’t support chat.


Plugging the base unit into our network it was given an IP address via DHCP (as most networks will), but should you need to – all of those settings can be adjusted via the phone, including the ports used. My initial Skype performance was not great, which may be due to the number of people using our Internet connection in the office, and concurrently connected Skype users (albeit not in calls). Interestingly, port forwarding only made things worse, and removing the port forwarding is actually what solved the issues. I then had a 30 minute phone calls with my parents to an Italian land line, without any squelching or cut-offs. I had to actually tell them I was using Skype for them to realise I was (and they are both technologically literate). This in itself is testament to the sound quality.


Making land line calls was easy, but there was no separate contacts section for land line numbers. Even inside the Skype contacts, where I have contacts that are just land lines (not Skype contacts) there was no option to make this is as a land line call instead of on Skype Out. Instead, each number must be typed in manually. This is disappointing. In reality though, there is no real reason why you wouldn’t just use Skype Out to make these calls. The land line fall back, is only really for making emergency calls – which Skype doesn’t support.


As the Skype market gets more attention, the quality of phones is increasing dramatically and this is by far the best Skype phone I’ve used. Without ever needing to touch a PC, anyone can be up and running on Skype, while also having a phone for making standard land line calls. At £88.11, I really feel there is no better option out there.