Closed systems don’t make it easy to do things they’re not specifically designed for. Games consoles are a key example. Xbox 360s and Sony PS3s have hard drives and should, in theory, be capable of letting you capture your own gaming highlights to share with the wider gaming community – but they don’t. The Roxio Game Capture box is here to plug that gap.

The popularity of Xbox Live Achievement points and, to a lesser extent, Playstation Network trophies has proved that the social aspect of gaming goes further than merely people playing against each other directly. Competition extends beyond the frameworks built by designers too. Glory in the gaming world comes as much from exposing glitches as getting high scores, and Roxio Game Capture lets you snag clips of these – most likely to slap them on YouTube in the hope of racking-up millions of views. 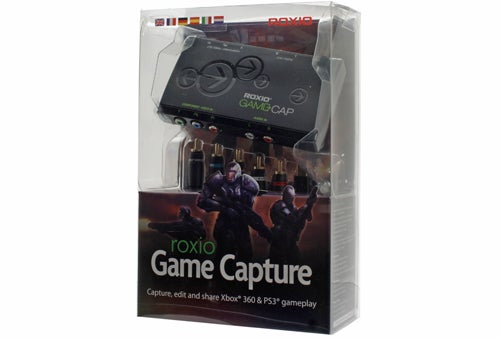 It’s a two-part package, consisting of a box that hooks-up your console, TV and computer, and the Roxio Game Capture software. The hardware will connect to any device with a component video output but is thoroughly geared towards Xbox 360 and PS3 users. It’s worth bearing in mind that you may need to buy an additional component cable for your console, especially as HDMI has already become the “standard” HD output for these two gaming platforms.

One set of component cables is included, but this is to connect the Roxio Game Capture unit to your TV – not to plug directly into your console. Using component rather than HDMI connection may seem like a retrograde step, but it’s necessary. HDMI’s HDCP (High-bandwidth digital copy protection) doesn’t allow recording, so it’s an enforced technological limitation at work rather than something Roxio has any control over.

However, a crucial limitation of Roxio Game Capture is that it will only snag video at 480p resolution – not in HD. This is not a limitation of the component output, which is capable of transmitting video at 720p or 1080i resolution with a PS3 or Xbox 360. The restrictions this gadget puts on your gaming are fairly serious too. The pass-through element of the box means you can still play the content on your TV in HD, but as it rules-out using HDMI, you’ll almost certainly have to make do with 720p/1080i. And as the audio output is a stereo phono pair, you can wave goodbye to 5.1 surround sound while using Roxio Game Capture. 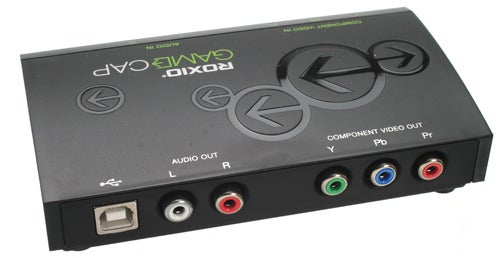 At first it seems like this is a much more convenient way to capture your gaming highlights than using a camcorder or standard PC capture card, but it comes with its own set of compromises too. They are less obtrusive than using a PC card, and easier to setup than a camcorder, but as Roxio Game Capture is aimed at the hardcore gamer, they may prove to be deal-breakers for many. Especially when it costs around half the price of an Xbox 360 console.

Setting up the Roxio Game Capture is blessedly simple. The component connection is analog, giving more opportunity for quality degregation but not requiring the digital handshake of HDMI. Although the bundled software took a surprisingly long time to install – hardly an age though at around 10 minutes – as soon as we plugged-in the console and USB cable, the video came streaming through the bespoke Game capture software immediately.

You need to pick from a list of PAL, SECAM and HTSC (the majority of you will only need to worry about PAL) options, but even if you don’t know the exact band of your equipment, you can find out through experimentation within a minute or two. AVI, WMV and DivX recording options are available, but the capture resolution is locked to 480p. Those looking to save gaming highlights for desktop posterity should use the data-hungry AVI codec, but wannabe YouTube stars may be better off with the lesser-quality WMV and DivX alternatives.

One-click recording makes capture tremendously easy once these initial setup choices have been clicked through. You can also choose to record for a certain length of time – perhaps an hour – if you want to record a whole gaming session rather than just a quick nugget too. Captured clips then show up as thumbnails at the bottom of the screen, using a snap from the beginning as a thumbnail image.

When Roxio Game Capture is geared towards Xbox 360 and PS3 gamers though, the lack of HD recording feels like a massive missed opportunity. We find it baffling – when mobile phones have no trouble processing HD-quality video, is Roxio seriously suggesting it’ll be too much for the PCs of hardcore gamers? 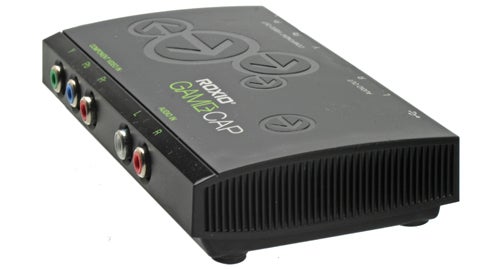 Fine detail is lost, resulting in a much softer image that your console is pumping out – unless you’re harvesting footage from a Nintendo Wii or last-gen machine. However, it’s much better than the results we saw in the S-video Compro Videomate C200. There’s no ghosting, no strange textures in block colour and the edges of objects are as solid as they should be – you’d likely find all these issues in any s-video or composite alternative.

Once videos are blown-up to full screen on a decent-sized computer monitor though, the difference between 480p and 720p is instantly obvious. And it’ll be obvious to any prospective YouTube and Vimeo viewers now that HD content on the top video sites is very common.

Roxio Game Capture doesn’t just let you record video of your own gaming exploits – it also comes with the software to chop up clips and weave them together with transitions, effects and text overlays. The included software suite is careful to keep the capture and editing halves separate, although any clips just captured are easily accessible one you switch to the VideoWave video editor.

The interface is set out like a storyboard, letting you drag clips into slots linked together with transitions. On top of this, you can add music – which doesn’t have to replace the sound captured from your console – text, overlaid images and plenty of effects. It’s surprisingly flexible too, as each of these elements can be as long or short in duration as you like. Each isn’t tied to the length of a specific clip. 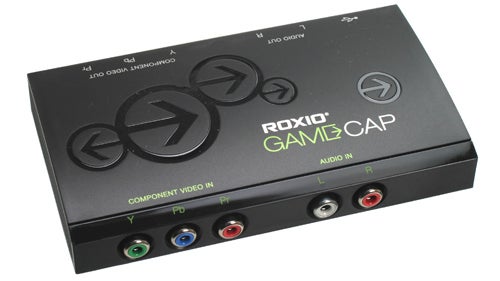 There’s a definite learning curve, especially if you’ve never used a video editing program before, but we found ourselves starting to get to grips with it within 15 minutes or so. Check out our demo video of 2D Boy’s World of Goo on the first page of this review to see some effects in action. With a bit of effort, it’d be easy to surpass the quality of most YouTube uploaders – and perhaps even match the quality of professional gaming publications (non-HD content aside) if you put in a little artistic flair. What’s more, creating your own mini-movies from your gaming vids can be fun too. The software doesn’t offer the power of a pro-quality editing suite, but its toybox-like approach works well.

However, it’s far from perfect. Even with a reasonably speedy desktop PC equipped with a half-decent gaming graphics card, the software chugs frequently. It’s at its worst when you’re browsing through the effects roster, when it occasionally slows down to a painful crawl. To give the editing suite its due, effects are rendered in real-time in the preview window, but we’re sure overall performance could have been significantly improve with some simple tweaks.

The Roxio Game Capture is essentially a tailored capture card. Its key feature is that it effectively splits the signal, sending it to both your TV in HD (if available) and to your computer over USB in 480p resolution. However, it also diminishes the quality available to you. Using the box’s outputs you’re limited to 1080i resolution and stereo sound. This zaps away some of the gadget’s convenience factor, when most hardcore gamers are unlikely to be happy “making do” with this level of quality for general gaming sessions.

It is also possible to get similar results going down the do-it-yourself route.  Component video splitters can be bought online for less than £10, and component capture USB sticks less than £30. To get better results than you’d achieve with the Roxio Game capture, you need to spend a fair bit more. The Hauppauge HD PVR will let you record in 1080i HD and pass-through optical audio and an HD signal back to your TV, but costs around £155 – almost double the Roxio solution. How much do your golden gaming moments mean to you?

The Roxio Game Capture device is the neatest solution for PS3 and Xbox 360 gameplay capture at the price, but it’s not without serious drawbacks. You can only record in 480p, and using its outputs rules-out 5.1 audio. However, if you’re willing to draw a line between your normal gaming sessions and your recorded sessions, and alter your setup between them, this will come up with some good-quality results.

The bundled video editing suite is fun-to-use and flexible for what’s almost a freebie, but minimal optimisation means it struggles to run smoothly on reasonably powerful PCs – a surprise when the content being edited isn’t even HD.  However, to get significantly better results you have to spend roughly double the price.