It’s been a great year for the PS2 – like an aged theatrical ham given one more chance at the spotlight, it’s delivered performance after performance that has shown the younger generation that the old codger of the console world still has what it takes. Okami and God of War 2 should be in most sensible best of lists, some people (though not me) regard Final Fantasy XII as the best RPG of all time, and even Burnout Dominator can stake a claim to being the year’s finest arcade racer. But with Rogue Galaxy we’re in the era of the final flourish. With no major exclusives after September, the PS2 is heading off to what passes for retirement in console circles – a few more years of dwindling franchise updates and cheap kiddie-flick adaptations. 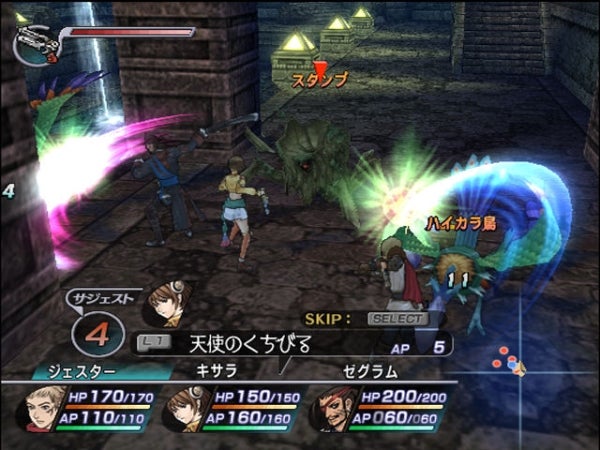 It would be nice to report, then, that it’s going out with a bang, particularly as, when originally sighted, Rogue Galaxy seemed to fit in perfectly with FFXII and Okami as one of the PS2’s late greats. Developed by Level 5, the creators of Dark Chronicle and Dragon Quest VIII, you could see it as the culmination of their cartoon RPG style. Rogue Galaxy is a dazzling fantasy space-opera; the sort of RPG you might get if you locked George Lucas and Studio Ghibli’s Hayao Miyazaki in a room with Square-Enix employees and said they had to come up with a game before they could leave. 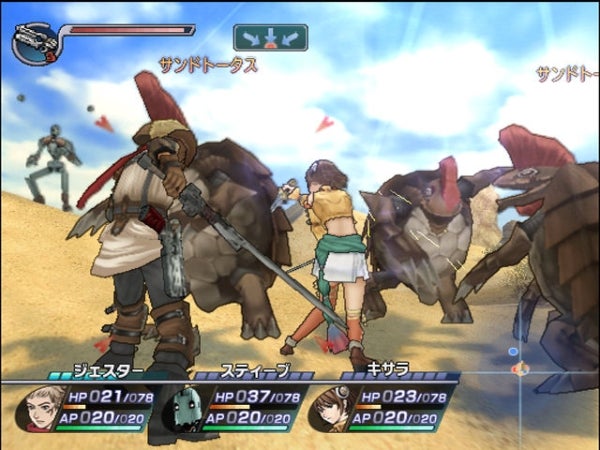 In terms of visual artistry, the, Rogue Galaxy is as good as it gets. In many ways it bests Blue Dragon on the Xbox 360, with superb, detailed character designs, gorgeous fluid animation and stunning cel-shaded worlds. You might not get the vast scope or size of the epic landscapes of Dragon Quest VIII, which seemed to stretch off into the distance from everywhere you looked, but you do get something more detailed and consistently impressive. 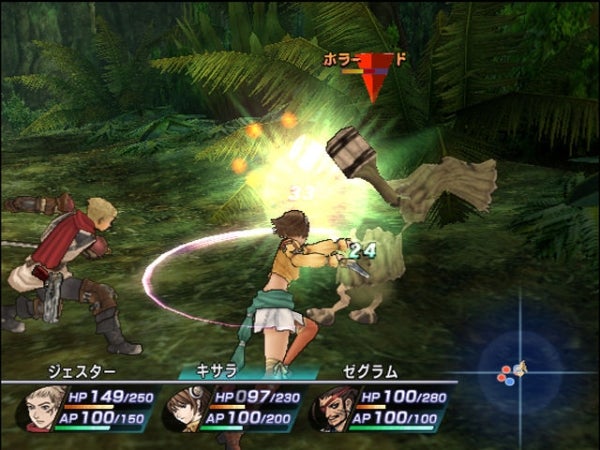 Make no mistake; there is a wonderful imagination at work here. The game kicks off with a desert planet straight out of Star Wars, but then introduces Space Pirates who race around the universe in stately, tall-masted Galleons. From there we’re off to lush jungle planets, a huge urban metropolis with towering skyscrapers and traffic in the skies, water worlds and planets of perpetual twilight. And while your hero might be straight out of the classic spikey, blond dreamer book, he’s soon crewed up with a tubby Scots aliens, bossy talking cats, Amazonian tribeswomen and C3P0-esque camp robots. All are brilliantly conceived and drawn. The only fly in the ointment is the baffling omission of Widescreen support. Is anyone out there still playing games on a 4:3 TV?

Still, Rogue Galaxy triumphs in many other areas. For a start, it is not in thrall to the most of the more tiresome traditions of the Japanese RPG. Like FFXII it has dispensed with turn-based combat, with real-time sword swinging like you’d find in an action RPG, but with the option to pause the combat at any point to use items or special abilities. Actions aren’t totally free – you have a gauge that runs down the more you attack or use items, and you need to wait while the gauge recharges once it’s spent – but this certainly makes for a more accessible breed of RPG. 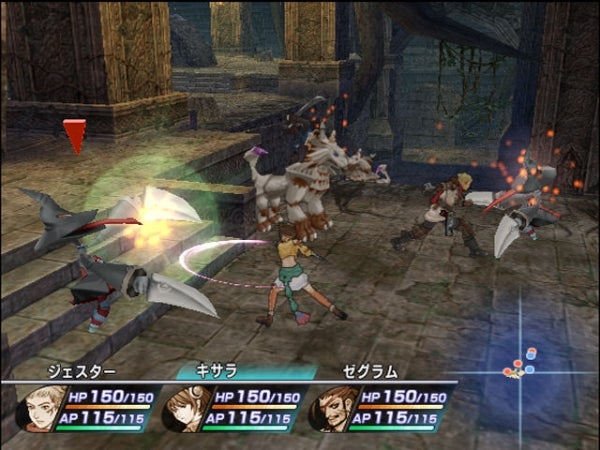 As with FFXII, the game has also found a new approach to handling a party. You still have characters who follow you around, but they are basically AI controlled unless you give them specific instructions. You can give them general strategies to follow – though there’s nothing here as detailed as FFXII’s gambit system – and generally leave them to do their own thing. Cleverly, they will actually request orders during combat: you’ll hear a spoken prompt followed by a couple of options, selected by pressing the L1 or L2 buttons.


Thanks to the space theme, you always have a choice of ranges or melee weapons, and using each you’ll have special attacks, plus spell-like defensive capabilities, which characters can access either when you use the paused menu in combat or when you follow the L1 and L2 suggestions in the heat of battle. This adds a little more of the traditional Japanese RPG flavour to the action, and stops it from being all hack and slash. 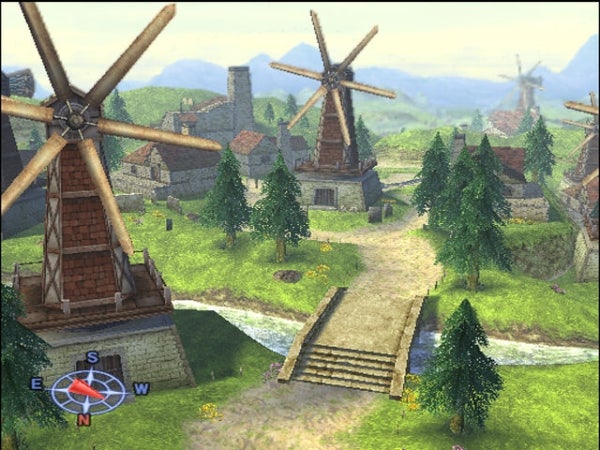 Nor do the gameplay innovations end there. Firstly, while Rogue Galaxy does have a form of character class system – only certain characters can use certain weapons – there is a degree of flexibility in the system of abilities. The game uses a Revelations grid, which acts a bit like the License Grid in FFXII. Here, finding certain items and attaching them to a particular character’s grid opens up new special abilities. These in turn open up slots for new or upgraded abilities, and these can be equipped by finding the right item for that slot. Added to this, the game has a cool weapons upgrade system, where this bizarre frog-like creature swallows two weapons and spits out an improved model bearing characteristics of both. There are some limitations – Froggy won’t eat weapons of different types, and will only eat a weapon once it has been seasoned in combat – but it means that, on top of the usual experience point system, you have a solid, flexible way of getting your characters more and more powerful, and so more satisfying to play. 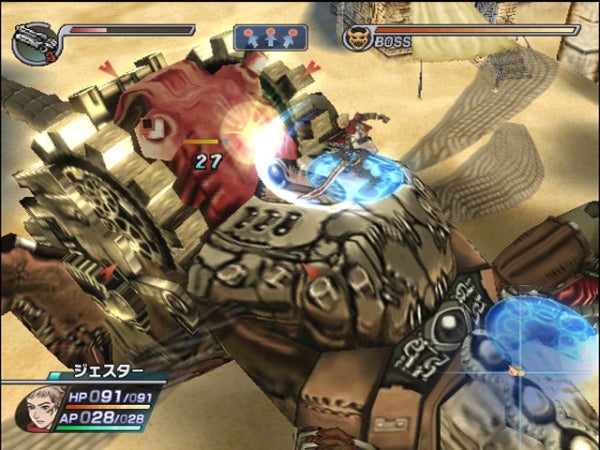 Up to a point, then, Rogue Galaxy has it all: it has great graphics, it has interesting, innovative game mechanics, and it also has an awful lot of gameplay. Sadly, however, it is not a truly great RPG. Here’s why. 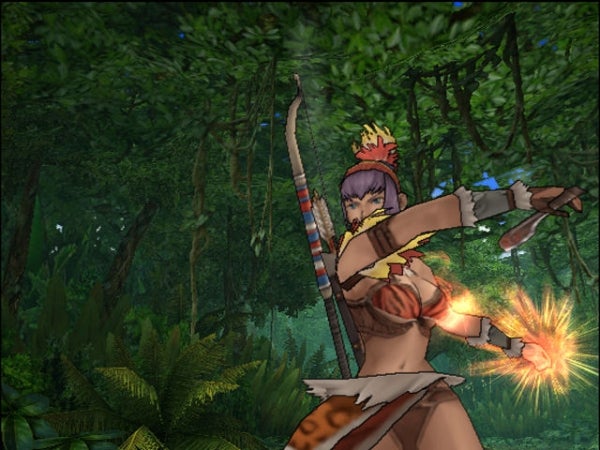 Problem one: random monster encounters. Blue Dragon and FFXII did away with them, Dragon Quest VIII didn’t, and it hurt. Rogue Galaxy follows the same path, and the simple fact is that it mires the game down in an endless stream of boring battles that will either end in a pitifully easy victory or – on occasion – in a sudden, frustrating and uncalled for death. Random monster encounters are not fun. They slow down the pace, annoy the player, and generally make you sick and tired of the whole endeavour. Rogue Galaxy ameliorates this a little by throwing in frequent check-points that also act as teleports, cutting down on the amount of back-tracking and repetition. All the same, all that hacking and slashing can get a real grind at times. 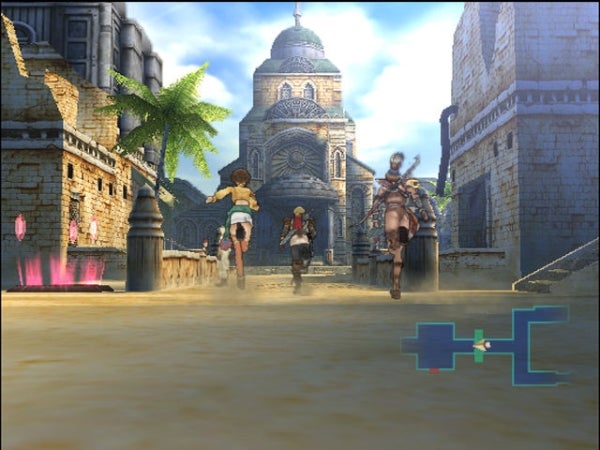 Exacerbating this is problem two: plot and character. The simple fact is that your central hero just isn’t interesting enough to grab or hold your sympathy or attention, and the plot takes an absolute age to get going. Dragon Quest VIII had the same problem in its early stages, but got progressively more and more interesting as time goes on. Rogue Galaxy doesn’t manage the same trick. Early on, the accessibility of the game, its style and its clever game mechanics were enough for me to cut it an awful lot of slack, but by the time I’d hit Rosencaster Prison – an endless, dreary procession of monster encounters in the most boring, monotonous architecture imaginable – I was pretty fed up with the whole thing. It did get better, and I started to change my mind once more, but it has to be said that this is a game with some horribly tedious patches, and not enough appeal in other ways to get you through them.


It seems to me that a truly great RPG should have three things: strong lead characters, a compelling narrative, and an engaging, addictive system of upgrades and enhancements. Final Fantasy XII and Blue Dragon both fall down a little on one of these, but can get away with it thanks to epic spectacle or sheer charm, respectively. Rogue Galaxy, however, only has the last, and that’s not enough to make it a must have. Instead, it’s a perfectly competent, perfectly playable RPG with stunning graphics and a scattering of ingenious ideas. But if you’re after thrills, drama or generally something more exciting, then it will only disappoint.


Great graphics and some innovative, accessible gameplay could have made this a hit with an audience normally frightened off by RPGs. If only the core characters and the story had a stronger appeal. 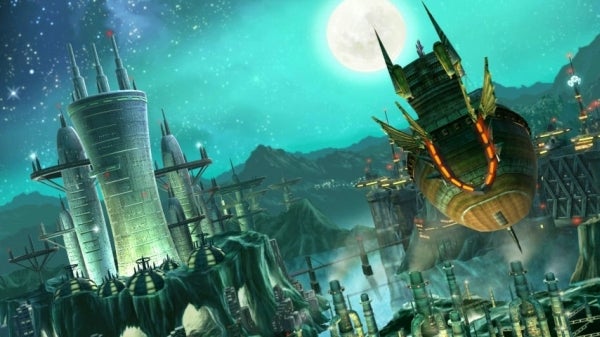