Something strange is happening here. On paper, the Rock Band and Guitar Hero franchises seem to be getting closer and closer together. Both now support a drums and microphone on top of guitar and bass. The raw game mechanics of both games are fundamentally the same. Both feature customisable characters and bands, downloadable content and online play. Look at the setlists of Rock Band 2 and Guitar Hero: World Tour and you’ll be amazed to see how many tracks the two have in common. 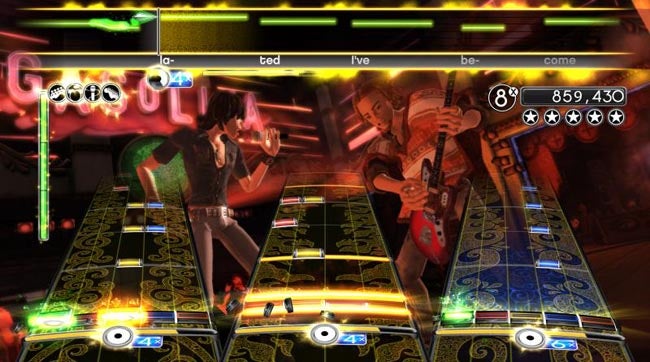 And yet the more you play each game, the more you notice how the two series are not converging, but diverging. While you can compare Rock Band and Guitar Hero on features or technical issues, you’re not really getting a full picture; deciding between them is more like choosing between Bob Dylan over Neil Young, Led Zeppelin over The Who, Metallica over Nirvana – it’s as much a question of individual taste as of artistic quality. It all depends on what you’re looking for. 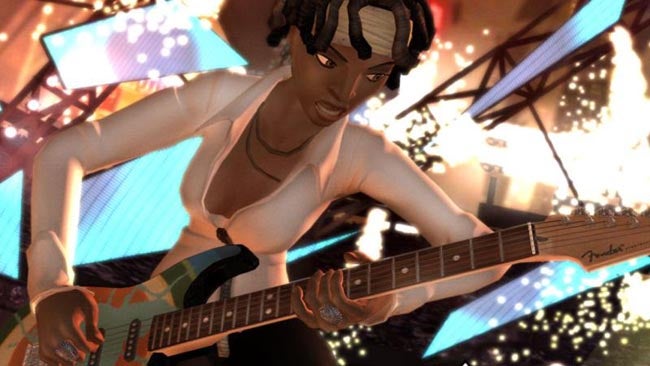 Rock Band 2 is in itself a weird animal – at least here in the UK. At the moment it’s an Xbox 360 exclusive and it’s only being sold without instruments. The new deluxe instruments packs that our friends stateside are enjoying, with their enhanced guitar, microphone and drum kit, is nowhere to be seen on our shores. Luckily, we can still play with existing Rock Band kits (now available for less than £100 if you look carefully) or use any Guitar Hero III/World Tour or USB microphone accessories we have around. In practice, this actually makes Rock Band 2 a little more accessible than the original. If you already have GHIII or World Tour you can get stuck in for just the cost of the game, then upgrade to drums and microphone at relatively little cost (around £60 for the drums and under £20 for a compatible mic). 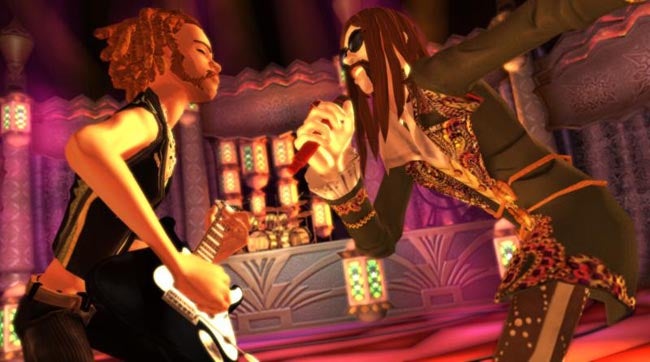 It helps that this Rock Band is a lot more welcoming to the solo gamer. For a start, a single player career is now the same as a band career – you can just start off your own band and have friends join in at a later date. The tour mode also gives you a greater sense of progress this time around. You’re no longer stuck in a small number of venues playing the same songs over and over again in different sets. Sure, there’s still some repetition to put up with, but it’s much easier now to enjoy solo Rock Band 2 in the same way you’d enjoy solo GHWT, playing the tracks, completing challenges, unlocking new venues and slowly working your way up from the backroom bars to the big stadia.

But then you don’t have to ever play on your own if you don’t want to, because Rock Band has got a lot more flexible about how it handles online play. You can now play through the main Tour mode with any combination of friends online and offline, with players dropping in and dropping out as needs be. Don’t have any friends to hand? Well, you can start a Live game and allow random players to join in, or even go out there and find a band that needs, say, another guitarist, singer, drummer or bass player to jam with.


It’s all very easy and it does a great job of opening up the full Rock Band experience to more of us, more of the time. After all, you can’t always find three mates when you’re in the mood to rock out. What’s more, the game is also more accommodating when it comes to matching players and instruments. It doesn’t matter that your character is a guitarist but the band needs a bassist – you can just switch instruments when it’s time to play. 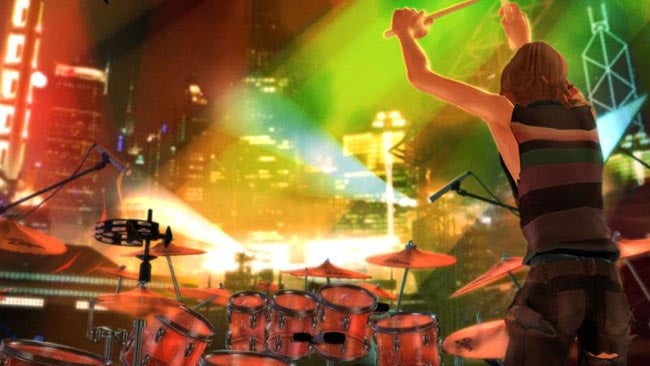 This alone gives Rock Band 2 a boost over Guitar Hero: World Tour, but the biggest reason to buy this game over its rival is that it still offers a very different, more authentic and slightly less cartoony rock experience. GHWT has more customisation features, but RB2’s seem to produce more distinctive results. GHWT offers fully customisable guitars and basses, but RB2’s licensed models give those of us who aspire to owning real guitars an in-game reward worth working for. GHWT’s reworked visual style has bought the series closer to Rock Band’s real concert video style of camera angle and editing, but RB2’s performances, now with some superb post-processing effects, still look more like what you’d see on VH1 or MTV. Of course, GHWT has more humour and demonstrates a real affection for Hard Rock/Heavy Metal cliches, but there’s something about RB2’s style that makes it feel like a hipper, smarter take on the genre. 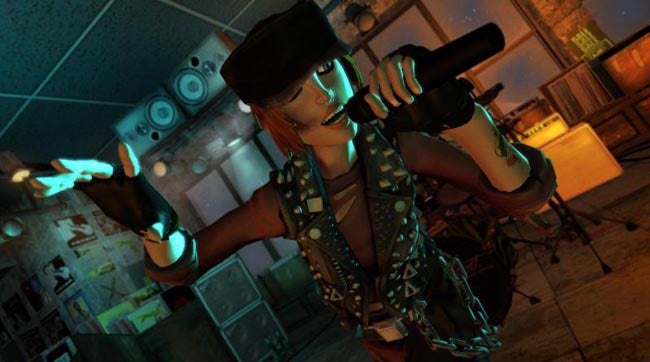 It still works better when played with other players, too. The key is the way that players can use overdrive – the Rock Band equivalent of Star Power – to save a player who’s floundering or who has dropped out of the song altogether. One tilt up of the headstock from a kindly bandmate and, suddenly, the weakest link is back in the game. This encourages you to watch each other’s backs and think like a band, as does the band overdrive where you get a bonus multiplier for using overdrive in unison.


There’s also still something about cruising through to the big climax of a massive song in RB2 that – for some intangible reason – GHWT can’t quite match. There’s also something about the way the Tour mode is structured. Somehow, hiring a manager, an East coast promoter or a merchandise girl, winning a band battle and then getting a new bus or a new plane to take you to new concert destinations means more than just opening up another gig and another straight setlist to play. RB2’s more open structure, which encourages you to play what you like where you like, also gives you a greater sense that you’re a band in charge of your own destiny.

The tracklist is, as ever, vitally important. Both games have key tracks – Fleetwood Mac’s ”Go Your Own Way”, Smashing Pumpkins’ ”Today”, Foo Fighters’ ”Everlong”, Bon Jovi’s ”Livin’ on a Prayer” – in common, but RB2 goes further into leftfield and indie material and has tracks like AC/DC’s ”Let There Be Rock”, The Red Hot Chilli Pepper’s ”Give it Away” and Pearl Jam’s ”Alive” to recommend it. And if you get tired of the 80 songs provided on disc and the 20 you can download gratis, you can download the same range of complete albums and additional tracks that are already available for Rock Star (any tracks existing Rock Band owners have already been downloaded will be included automatically and there is a facility available to export the songs from the original Rock Band disk). 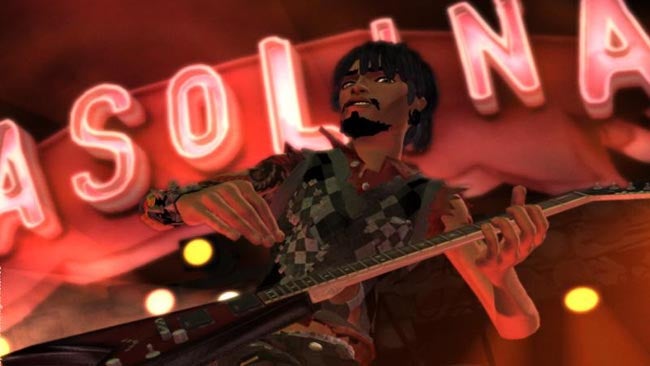 Barring DLC – currently stronger for Rock Band – it’s hard for me to choose between the games in terms of song choice. But if you want to make up your own mind, all I’d say is this: GHWT probably has more for fans of hard rock, guitar wizardry and metal, but Rock Band 2 has the edgier and arguably more interesting selection.


And there’s still a lot left to cover. How about a special drum trainer mode, designed to get would-be Neil Pearts and John Bonhams up to speed? How about the new daily and weekly Battle of the Bands events, where you can compete with the bands of friends and strangers online over specific setlists in various venues? Or the new Tour Challenges, which give you setlists, escalating in difficulty and designed to sort out the ham fisted from the true guitar gods? Rock Band 2 isn’t a staggering move on from the original, but Harmonix has made additions and tweaks where they were needed most, and made a bigger, more brilliant and more accessible game as a result. 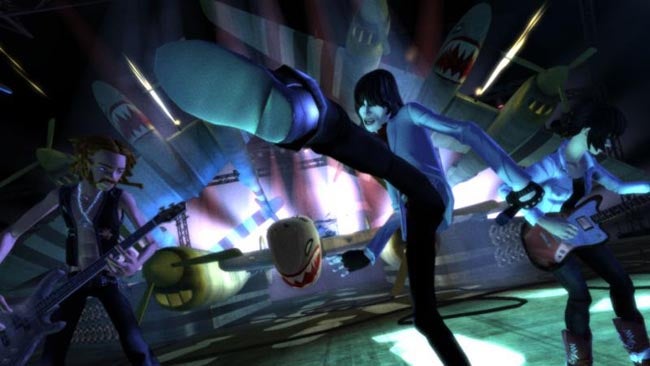 
If you want to rock out and shred like Vai, Van Halen and Satriani, GH offers a more score-focused game and a greater challenge. If you want to get closer to the real band experience, Rock Band 2 has it down. Of course, GHWT now enables you to make your own music, but to my mind Rock Band 2’s stronger online modes and authentic feel make up for that. In other words, it depends on what you’re looking for. Buy either game and you’ll have a great time playing it, but in the end this choice has to be personal. If I had to plump for just one of these titles, I’d be splashing out my cash on Rock Band 2.


Better online modes and a stronger single-player game make Rock Band 2 a marked improvement on the already fantastic original. It’s a matter of taste whether it’s a better game than GHWT, but for my money it offers a richer and more varied band experience.