As the recent heat wave will have reminded us all, Britain does actually get some sunshine every once in a while and when it does, the last thing we want to be doing is staying indoors. There again, we wouldn’t want to miss out on keeping up with the cricket score in real time while out basking. So what’s the solution? Well a portable radio of course.


Now portable radios have been around for donkey’s years, as have solar powered ones and DAB ones. However, the first company to combine all three of these elements is Roberts with its solarDAB. Now you should never be without the endlessly entertaining witterings of Jonathan Agnew and the team, no matter how long and far you travel.


As you would expect for a portable solar powered device, the solarDAB is quite a small and light unit, weighing in at 697grams and being about the size of two paper back books (190mm x 77mm x 112mm). It’s not the most attractive thing we’ve ever seen (even ignoring the sticker that our photographer forgot to take off), especially in this bright green livery, but it’s at least neat and tidy. 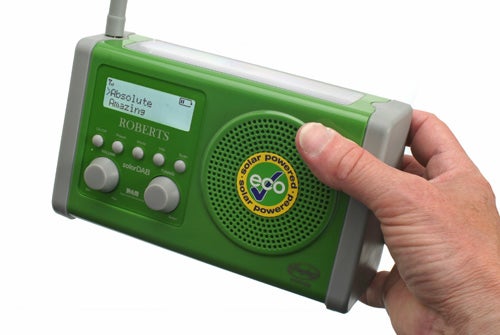 Build quality is also perfectly adequate but nothing special. The body is made from a sturdy plastic that’s protected from major bumps and scrapes by two rubberised ends that double as stands. However, the finish of the materials is a bit rough with less than perfectly aligned panels and clearly visible mould seams round the edges. This means that despite its looks, this is not a particularly weather-proof radio.


We’re also not sure about the aerial that must be unclipped from a recess in the back and screwed into place each time you want to use it. We appreciate this keeps it well protected when in transit but it is a little inconvenient. 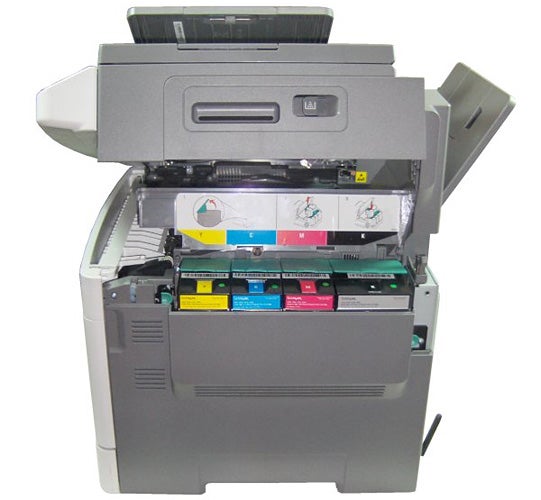 Running the length of the top is the all important solar panel. At peak this can generate enough electricity to both run the radio and charge the inbuilt battery. Charging understandably takes some time but once saturated the battery will provide up to 27 hours of listening without any further sunlight. There’s also a mains charger for emergency situations. So unless you’re planning to furnish your igloo with one of these through a polar winter, you should be able to get continuous playback wherever you are.


Said inbuilt battery is stored in the bottom of the radio, under a flap secured with two screws. It’s easy to get to but uses a custom battery (consisting of three AA sized NiMH cells wrapped in heatshrink plastic) with a two-pin motherboard-fan-header style connector, so replacement (if ever needed) is probably best left to the experts. 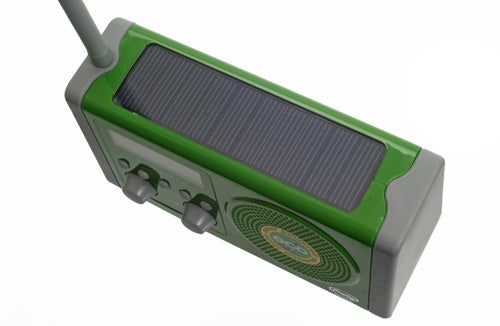 There’s no line-out socket for piping the DAB signal to a proper Hi-Fi (hardly an essentially, we know, but a common feature on many DAB radios) but there are line-in and headphone sockets round the back.

Turning the solarDAB on and the first thing that strikes you is how bright and clear the display is. It’s only LCD, so suffers in terms of viewing angles, but the backlight is plenty strong enough to cope in strong sunlight. As a power saving measure the backlight also turns off after 10 seconds of non-usage. 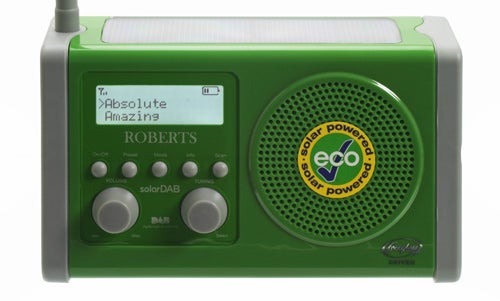 As well as being clear the display refreshes quickly so copes well with quick navigation (a classic problem with LCD displays). It also packs in plenty of information including two lines of generic alphanumeric characters for station and DLS information. Above these are icons for displaying signal strength, battery life and sunlight strength, so you should never be caught short by a flat battery you weren’t aware of. 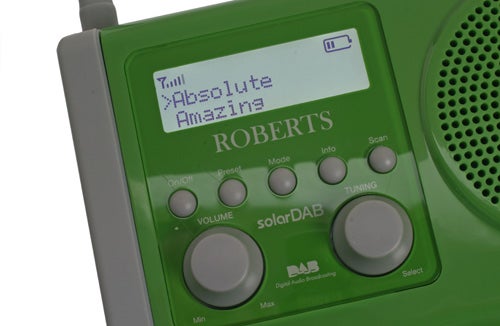 Controls are kept to a minimum and are rubberised, adding further to this radio’s toy-like feel, but they’re sturdy and most importantly are easy to use. There are buttons for on/off, preset, mode, info, and scan and dials for tuning and volume. Ten presets can be stored with the classic hold-down-to-store, tap-to-recall method used for organising them. With no FM to back up the DAB signal, there are just two modes for this radio; line-in and DAB. This is somewhat of a concern as, despite what the DAB group tells us, DAB reception is still somewhat patchy and FM is often better so can be a handy backup. At least this radio also supports L-band DAB, so will work elsewhere in the world.


The info button, meanwhile, changes which bits of the of DLS information, which is transmitted along with the DAB signal, to display. This includes station frequency, song/artist name, bandwidth, time, station name, and ancillary information like news headlines. 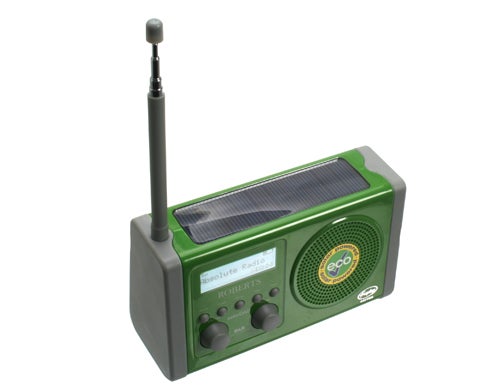 Moving onto to some listening tests and it’s clear straight away that the solarDAB lacks depth and has quite a weak, bass-starved sound. This means it particularly struggles with any music that you want to hit you with a bit of power (dance, RnB, heavy metal, etc.). However, there’s a satisfactory degree of clarity that means you can still happily have a sing along, whatever your genre of choice. Volume is also surprisingly ample with the solarDAB able to fill a large room or keep you within earshot of the cricket score while playing Frisbee around your picnic.


The Roberts solarDAB isn’t the most powerful or feature rich DAB radio on the market but its combination of a lightweight yet tough construction, easy to use controls, superb battery life, solar power, and international DAB compatibility means it’s one of the best travel radios we’ve seen.