You have to be feeling brave to put a classical-era RTS out there at the moment. Arguably, Rome: Total War has this region of the genre sewn up at the moment, and those who want a Greek spin-off can download the new Alexander campaign. The Rise of Nations: Thrones and Patriots expansion covered similar ground, and Ensemble’s Age of Mythology hasn’t dated badly, either. And let’s face it: if you want to harvest materials, build bases, raise armies and conquer enemy forces, you’re hardly short of other options. From the good – Rise of Legends, Battle for Middle Earth 2 – to the mildly disappointing – Age of Empires III, Star Wars: Empire at War – the supply of RTS games isn’t exactly drying up.


So Rise and Fall’s biggest problem is that, judged as a straight historical RTS, it falls straight into the bin marked ‘average’. 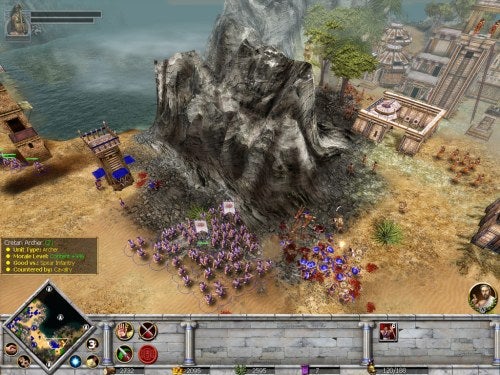 Don’t get me wrong – there are plenty of things to love about it. Firstly, like Rome and BFME2, it has scale on its side. The now defunct Stainless Steel Studios Titan 2 engine is perfectly capable of rendering hundreds of warriors at the same time, along with gigantic war elephants, crumbling fortifications, rolling seas, mighty siege engines and natural-looking trees. The lighting isn’t as effective as it is in Rise of Legends or BFME2, and up-close the models have a rather angular, low-detail appearance, but you can’t dismiss the sheer amount of stuff that the game can throw on the screen. If you want epic, Rise and Fall certainly delivers. 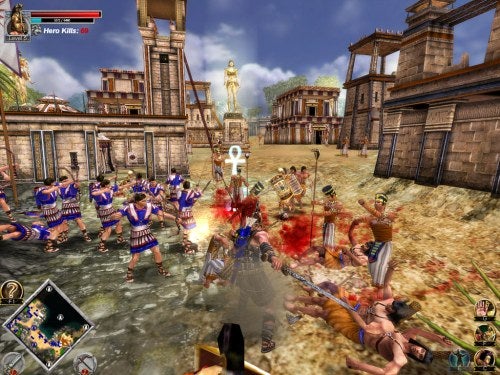 And that’s not all the game handles well. Fortifications are easy to create and actually of genuine use, allowing you to position archers and catapults in defensive positions, and seeming to offer the correct advantages of height and cover. To counter this, siege engines prove very effective, and while the enemy is occupied with these you can sneakily put ladder teams into position and make a bold secondary assault on the walls. Unit building and upgrading is nicely streamlined, individual troops clump automatically into units when they appear, and upgrades are sensibly available at the point of production – don’t you just hate it when you have to build a separate facility just to get a better spearman? Rise and Fall even manages relatively workable naval combat. Troops embark and disembark when they’re told to and ships are able to ram and grapple to board or destroy enemy vessels.

But set against all these good points, there is a lot here that is so-so, or ever so slightly dull. You have four civilizations to choose from, but none of them seems to bring anything really special or different to the party. Tactics that work with the Greeks seem just as likely to work with the Persians, Romans or Egyptians, and – bar a few special units – you seem stuck with the standard groups (basic infantry, archers, cavalry, and spearmen) and their traditional advantages and disadvantages. The research trees are uninspired, and while the troops rank up nicely, actual combat too frequently disintegrates into the usual sort of scrum. As with Age of Empires III, you can see that Rise and Fall is trying to be good, but there’s a slightly depressing feeling that you’ve seen it all too many times before. 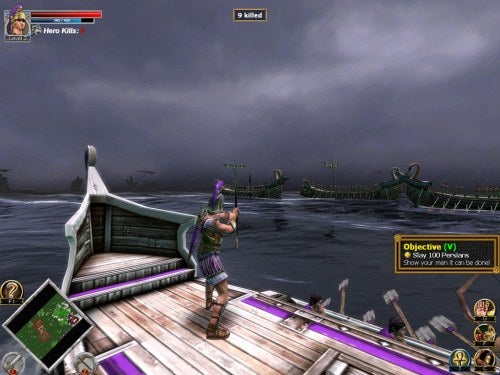 Worse, some aspects are actually poor. Any pretence at formation goes out of a window as soon as troops go up a ladder, and there seem to be problems with line of sight and AI. For instance, I found myself forever rescuing troops stuck at the top of a town wall, as they stood in blissful ignorance of the battles raging immediately below. At times, the pathfinding is woefully suspect – there’s little more frustrating than losing a battle because your troops can’t navigate their way down a hill, and if their route involves stairs or a ladder, there are times when you might as well forget it. 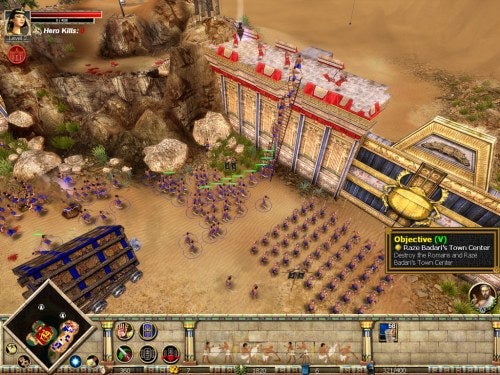 Finally, the two campaigns – featuring Alexander and Cleopatra – lack any real coherence or sense of progression. The plotlines are weak, the cut-scenes poorly rendered, and the dialogue is about as laughable as in-game dialogue gets, to the point where you’re almost hoping they meant it to be a parody. The maps are also slightly too linear; as long as you’re not stupid in your resource management and base building, it’s just a matter of following objectives in order until you hit the enemy HQ at the end.

So it’s more than lucky that Rise and Fall has a trick up its sleeve. Now, there’s nothing new about in-game hero units – we’ve seen them before in both incarnations of LOTR: BFME, Rise of Nations, Age of Mythology and, most recently, Rise of Legends. The difference here is that here your heroes really are crucial to the game. For one thing, they actually have a resource of their own, glory, which can either be used to level them up or can be spent on recruiting advisors for specific bonuses. For another, in Rise and Fall, levelling up your hero means more than just some new super power or a small boost to health – it’s the only way to obtain access to certain buildings, troop types and capabilities. 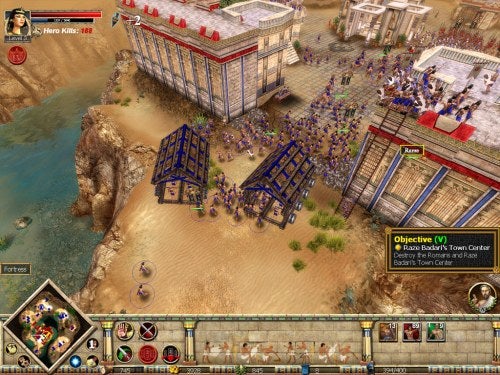 That’s all well and good, but not good enough to turn an average game into a good one. What is is ‘hero mode.’ Select your hero, press the Q hotkey, and the game suddenly zooms into a third-person view behind them. Using the mouse and the classic WASD combination, you can move your hero into battle, switch between melee and ranged weapons, and wreak your own brand of bloody havoc on the battlefield. It’s a bit like Rome: Total War and Spartan: Total Warrior combined, and it’s Rise and Fall’s single biggest saving grace. 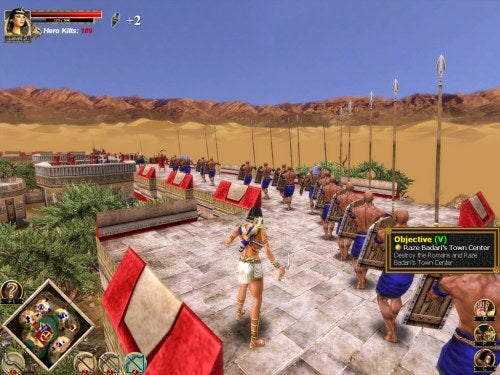 Why? Because hero mode isn’t the gimmick it first sounds. A hero can wear down whole regiments or snipe lurking archers before the body of the troops wades in. Best of all, he or she can still shout commands, urging the army forwards to charge against the enemy, or demanding they stand firm to hold a breach. Suddenly, what usually seems like a rather remote experience becomes brilliantly visceral and immediate. Lead a foray as Achilles, his blade swinging crimson through the enemy ranks, and you can see exactly what Homer meant by his “rage.” And if this is fun in single-player, it couldn’t be better suited to multiplayer. After all, what could be finer than demolishing your rival’s forces, then wading in to batter his hero toe-to-toe. If any RTS deserves to be played on a LAN against people in the same room, it’s this one.

Yet even here there are some frustrations. Attack moves are limited, those angular visuals look even worse when viewed close-up, and even the simplest bits of scenery prove impossible to navigate. In other words, any direct comparison with Spartan: Total War would be horribly unflattering. Of course, some of these complaints can be safely ignored if you just remember that this is primarily a strategy game, not an action title. 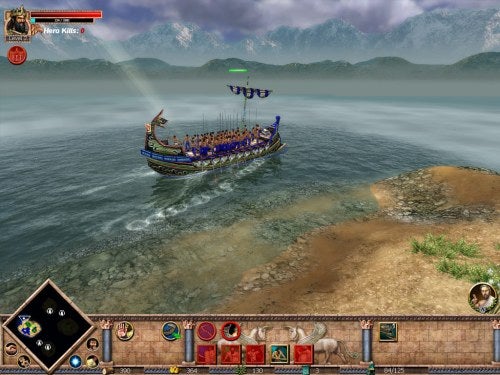 The sad thing is that the developers have – at times – forgotten this as well. There’s a horrible on-rails shooter section in the Alexander campaign set on the sea, and it’s followed by an even worse effort that sees the mighty king fighting elephants and catapults in the arena. It would just be irritating, but the fact that you actually have to chip away at these giant beasts and rumbling siege engines with your sword makes the whole thing spectacularly risible. Annoyingly, similar efforts await you in the Cleopatra campaign. It’s hard to imagine any action fan finding them that enjoyable, and most RTS fans are going to find them a serious annoyance. 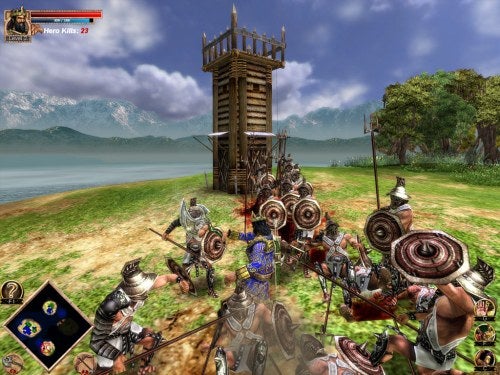 Still, simple skirmishes – whether played against the computer or against other players – show the game in a much more favourable light. The RTS gameplay is for the most part entertaining stuff, and hero mode really does elevate it into something special, giving you a means of pressing home the advantage or turning the tide of battle when all seems lost. And it’s at these times, when the game is at its best, that Rise and Fall has an almost mythic edge. The interesting thing to see will be if anyone else can harness its best idea – hero mode – to a better underlying RTS. Suddenly, a Battle for Middle Earth 3 doesn’t sound like a bad idea, after all.


Take hero mode out of the equation and you have an epic RTS undercut by so-so gameplay and a clutch of irritating niggles. With it in, however, you get an entertaining hybrid that adds some much-needed wallop and splatter to the traditional RTS experience.