There was a time when anyone looking to a BlackBerry to deliver their mobile email was going to have to carry a fairly large and not too pretty device around, and know that while their pocket computer was good at email it wasn’t good at much else. No music playback and no camera, for example. The combination of staid looks and feature-deprivation was enough of a double whammy for some to avoid the BlackBerry altogether.


Then BlackBerry maker Research In Motion decided it could do more. It started adding features to devices and making them prettier too, in a bid to appeal to out-and-out consumers and those business people who like a bit of style. So, this year we’ve seen the arrival of the QWERTY-keyboarded Curve and, just before the that, the candybar style BlackBerry Pearl.


There still are the larger format devices, and most recently of all I reviewed the 8820, which I’ve been using thanks to RIM ever since penning the review back in August. But with the Pearl 8120 I think I am going to switch allegiance. The original Pearl didn’t quite do it for me. I hated SureType (which I’ll get to properly in a couple of paragraphs), and the features on the device just weren’t good enough to keep me happy. 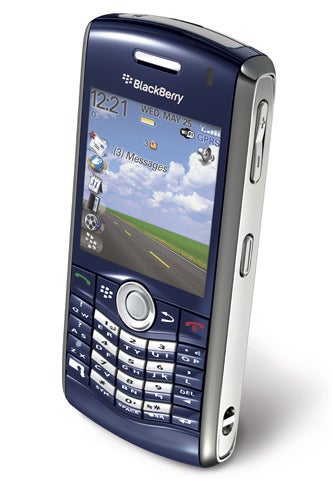 But RIM has taken on board a lot of the criticisms I and others made of the original Pearl, and of BlackBerry handhelds in general, and the Pearl 8120, while not perfect, is an improvement I think many people could live with.


Also, regardless of the feature improvements, this new Pearl is a cute looking device. The colour scheme is dark blue and chrome with the latter used for the left, right and upper edges and various highlights, while the front and back fascias are predominantly blue. It is comfortable to hold, being a slimline candybar handset. The actual dimensions are 107mm tall, 50mm wide, 14mm thick and just 91g. Its metal-like finish means it feels lovely in the hand.


The small miniature trackball that sits under the screen and is used for navigation within and between applications remains as delightful as ever. It rolls comfortably under either left or right thumb. I’d like to see an auto-scroll mode implemented so that longer emails can be run through without to much ‘thumb action’, though.


To the left and right of the trackball are the BlackBerry menu and back keys, and to their left and right the Call and End keys. The arrangement is unchanged from the original Pearl, and it works fine. There are also two ‘convenience keys’, one on the left and one on the right edge. You can configure these to launch whichever application or device feature you want.

But what about SureType? Well, the 50mm width of the Pearl 8120 simply doesn’t provide enough space for a QWERTY keypad, and RIM has shied away from a standard phone-like keypad too. Instead we have a system where in most cases two QWERTY characters share a single key.


You just type away hitting a key once regardless of which letter you want. The predictive engine has a stab at guessing what word you are after, and you can use the pearl button to select it, or just keep on typing. It does take a bit of acclimatisation, but is actually quite fast once you are used to it. New to the Pearl 8120 is a spell checker. It can be run manually and set up to check emails automatically.


I was pretty impressed with SureType this time around. If you don’t like it too much you can switch to a multitap system instead. This is more T9-like, as you tap a key once if you want its first QWERTY character, twice if you want its second. There is a point of ergonomics. The Pearl 8120 is a small device as I’ve already noted, and if you have large hands or stubby fingers you could find using SureType a bit fiddly. 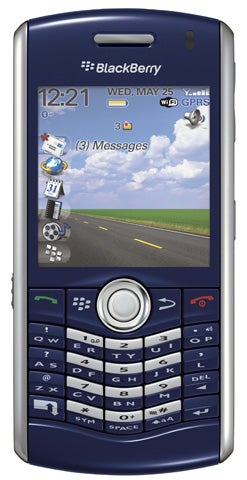 There is another point too, with regard to using the Pearl 8120 as a mobile email device. The screen is a bit on the small side. RIM doesn’t divulge the screen resolution, but I can tell you the screen is almost square at 38mm wide and 43mm tall, sharp and bright, and clear enough for reading incoming emails. But for complex attachments such as spreadsheets it isn’t really up to the job.


I said earlier that RIM has bumped up the features of this new Pearl and listened to criticisms. Well, on the latter front there are two important things to note. First off, at long last RIM has seen fit to cater for a 3.5mm headset jack. This sits on the upper left edge of the device and finally means you can use your own preferred headset instead of the bundled one. Hooray! Let’s hope RIM takes this ‘innovation’ forward into all its future devices.


The second thing is that the microSD card slot you can use to expand on the 64MB of internal flash memory is on the left edge of the casing where it’s easy to get at. No more powering down and removing the battery to swap memory cards. Again, I say ‘hooray!’

On the features front the big news is that the Pearl 8120 includes Wi-Fi. It is incredibly easy to scan for networks and then join them.


As with the original Pearl there is a camera lens on the back of the casing. It is vastly improved from the 1.3-megapixel camera on the original Pearl, and can now shoot at resolutions up to 2-megapixels. It’ll also capture video too, which its predecessor couldn’t do. 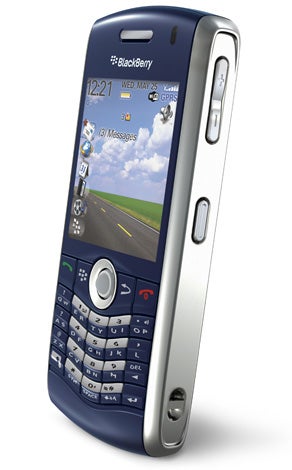 There’s music playback to complement that 3.5mm headset jack, but RIM lets things down by not providing any hardware control buttons. To play around with playback you need to go into the music application, which gets a bit annoying at times.


Anyone looking for a 3G connection should look elsewhere as the Pearl 8120 is quad-band GSM with GPRS and EDGE. To be honest, I didn’t really feel hampered by the lack of 3G.


If you are a Facebook fan there’s a dedicated app that might come in handy if you feel the need to update your profile while out and about. 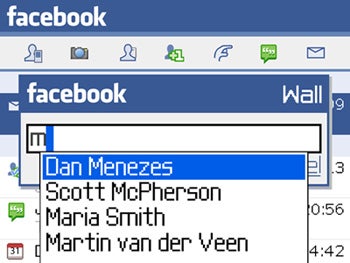 Battery life proved reasonably good. I got the Pearl 8120 to play music continuously from a full charge for just over twelve hours. This won’t beat many dedicated music players, but it is very competent for a mobile phone.


With the Pearl 8120, RIM is clearly trying to push further into the consumer’s consciousness and retain its business fans too. The device doesn’t go far enough to capture all consumers – where’s the 3G and the oodles of internal memory, for example? But it does show that RIM is trying harder than ever to break out of its ‘businesses only’ box. Design-wise it’s on the button. Features-wise there is still a little way to go. And as a whole, it’s certainly recommended.