Ricoh is one of the oldest names in digital compact cameras, having launched its first model over ten years ago, but it has never been a particularly prolific manufacturer. Its current line-up consists of just eight cameras. There are four semi-pro models; the Caplio GX100, the GX200, the GR Digital and the GR Digital II; there’s the heavy-duty industrial G600, the slim pocket compact R50, and the 10-megapixel, 7.1x zoom R8, which is still available. Adding to this short but interesting list is today’s review camera, the new R10. 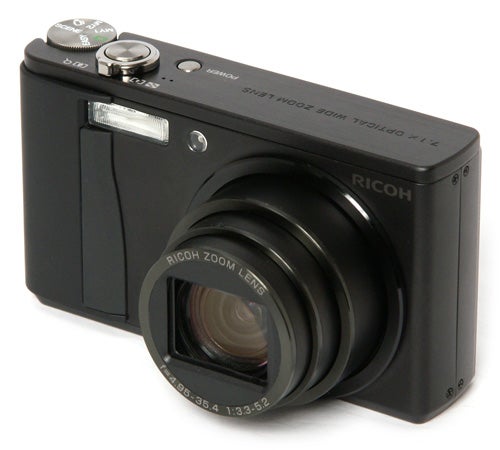 If you followed the last of those links, you’ll spot straight away that the R10 is an upgrade of the R8, sharing a nearly identical body and many of the same features. No, I have no idea what happened to the R9 either. Like its predecessor, the R10 it has a 10.0-megapixel 1/2.3-inch CCD sensor and an f/3.3-5.2, 7.1x zoom lens with a focal length range equivalent to approximately 28-200mm. Where it differs from the R8 is in the LCD monitor, which is now an extra-sharp 3.0-inch unit with a resolution of 460k dots and a very wide viewing angle both vertically and horizontally. 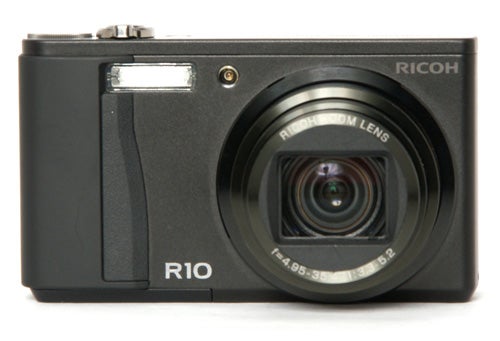 If you were looking for a pocket compact with a good zoom range, a couple of years ago a Ricoh R-series would have been your only option, but since then more manufacturers have moved into this sector of the market, and the R10 has a lot more competition than some of its forebears. The most obvious comparison is the Panasonic TZ series, particularly the new 10-megapixel, 12x zoom DMC-TZ7, although that camera isn’t available until April, and then at an as-yet undisclosed price. Also comparable is the superb 8MP, 10x zoom Panasonic DMC-TZ5 (£224), and the almost equally as good 9MP, 10x zoom Canon SX110 IS (£180). Ricoh cameras do have a reputation for being a bit expensive, but surprisingly the R10 undercuts both of these rivals with a price of around £170.

Like the R8, the R10’s body is all aluminium, and is built to Ricoh’s usual high standard. The overall design is pretty much identical to the R8, apart from the larger screen size, an extension to the rubberised handgrip on the front and a slight re-shaping of the thumbgrip on the back. The back of the camera also sports an extra button, a user-programmable Function button which is set to AE-lock by default, but can be set to one of seven options, including AF target selection, setting minimum aperture, and a selection of bracketing options. It can also be set to activate one of the R10’s other new features, optional stepped zoom. 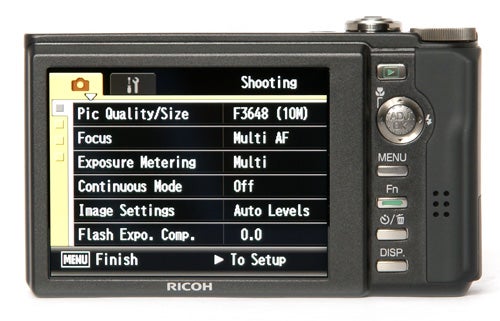 Normally stepped zoom is found on cheaper cameras, and the R10 normally has a nice continually-adjustable zoom control, operated via a rotary bezel around the shutter button. However it also has the option to use stepped zoom, with the steps set at commonly used focal lengths, including 35, 50, 85, 105 and 135mm (equivalent). This is useful if you want to simulate the magnification of a prime lens.


The R10 has the same brilliantly simple customisable user interface as the R8 and R7, with a small joystick-like button that is used both for main menu navigation and in Adjustment mode to quickly alter up to four shooting options. The parameters that are available on this quick menu can be changed in the main menu, with a wide range of alternatives including ISO setting, exposure compensation, white balance, image quality, focus mode, metering mode, drive mode and others, providing a welcome degree of user customisation and easy controllability.


One extra addition is the inclusion of an idiot-proof Easy mode on the main dial, although with such an easy-to-use interface it hardly seems necessary. In this mode the only adjustable parameter is picture quality, and most of the main menu options are disabled. 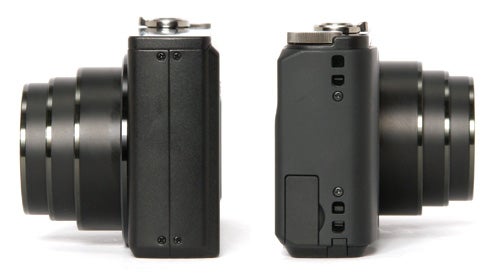 One feature that I do like a lot is the on-screen digital spirit-level, a small match-needle display that tells you straight away if the camera is tilted, which way and by how much. It works in both horizontal and vertical formats, flipping automatically as the camera is turned. If more cameras had this feature it could mean an end to tilted horizons and sloping oceans. Another addition to the display is the minimum focusing distance available in macro mode, which varies according to the current focal length setting.


Most of the other features of the R10 are identical to the R8, including sensor-shift image stabilisation, multi-point autofocus, 256-segment evaluative metering, VGA 30fps video recording and optional manual focusing.

Since the R10 shares so many of the same features as the R8, it’ll come as little surprise that its overall performance is also virtually identical, which is to say, very good indeed. It starts up in just under two seconds, although it is a little slower to shut down again. It still makes the characteristic mechanical whirring sound as the lens moves in and out, both on start-up, when zooming in and out, and when focusing. However this doesn’t appear to slow it down at all, and focusing is quick and accurate, although low-light performance is rather disappointing despite the AF assist lamp. In good light however, in single shot mode it can take a picture approximately once every 1.7 seconds, which is fairly brisk. In continuous shooting mode it can maintain approximately 1.3 frames per second, apparently until the memory card is full, which is very quick by any standard. 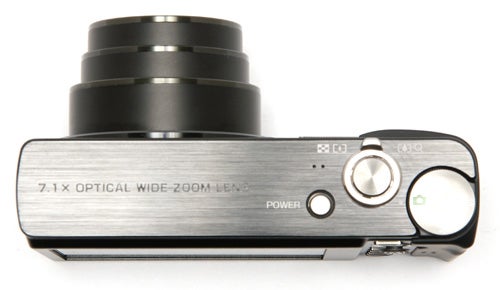 The R10 has a slightly different battery to the R8, a smaller 940mAh Li-ion rechargeable, but the claimed battery life has been extended from 240 shots to 300. I took around a hundred shots while evaluating the camera, and the charge meter barely moved from its full position, so this would seem to be entirely possible.


Unfortunately the one thing that hasn’t changed is the sensor. While many manufacturers use the larger 1/1.7 or 1/1.8-inch sensor format for their premium 10-megapixel models, Ricoh has afflicted the R10 with the same small and overcrowded 1/2.3-inch sensor as the R8. This is a great pity, because it has a negative impact on what should be very good image quality. Why Ricoh didn’t switch to the excellent 1/1.75-inch sensor from the GR Digital II is a mystery.


The overall level of detail is excellent, and the lens and/or image processing produces almost no distortion even at the 28mm end of the zoom range, with good corner sharpness. There is some purple fringing around bright highlights, especially at the edges of the frame, but the main problem is noise. There is a granular texture to shots even at 80 ISO, and this gets rapidly worse as sensitivity is increased. Shots at 200 ISO show a lot of noise, and at 400 ISO there are serious problems with noise and colour distortion. 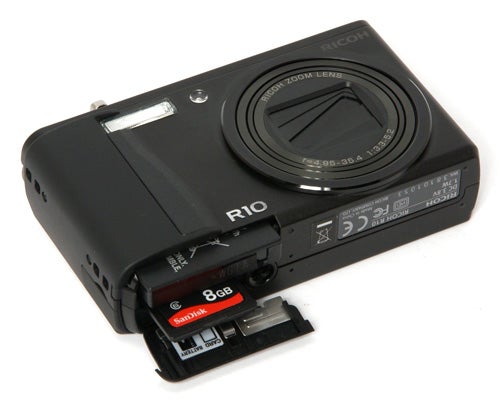 Unfortunately this isn’t the R10’s only problem. The auto white balance proved to be inconsistent and inaccurate, producing strong tints on a number of shots, including some very odd colour effects on both white backgrounds and shots with a lot of blue sky. There is a feature in playback mode to correct white balance manually, and even a brilliant little levels adjustment option, but it should be getting this sort of thing right automatically. This is very disappointing; I’ve always liked Ricoh cameras, and had high hopes for the R10, but sadly it fails to deliver.

The Ricoh R10 is a stylish, well-designed and well-made camera with an unusual specification and some innovative and useful features. It has a clever and easy-to-use interface, great handling and impressively fast performance, however it is let down badly by inferior image quality, especially at higher ISO settings, and also poor low-light focusing. 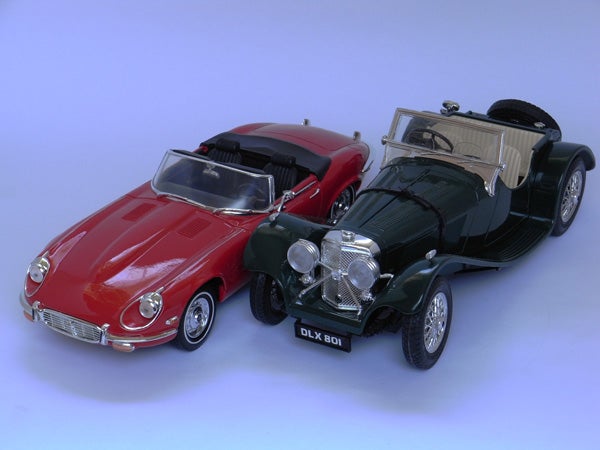 This is the full frame at minimum ISO. This shot was taken indoors using reflected daylight from a window. As you can see the automatic white balance has made a bit of a bish. 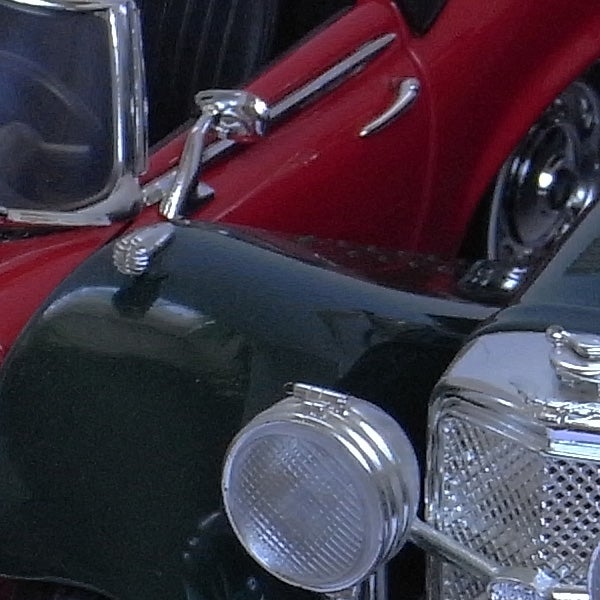 At 80 ISO there is plenty of fine detail and colours are nice and clear, but there is a haze of granular noise across the whole image. 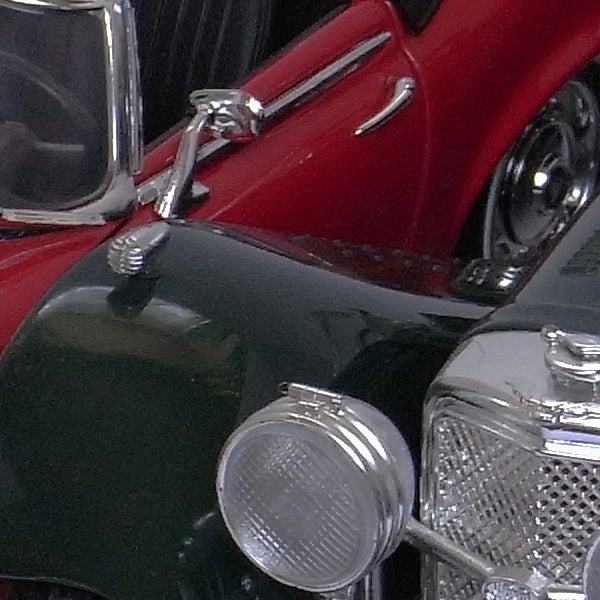 Results at 100 ISO are about the same. 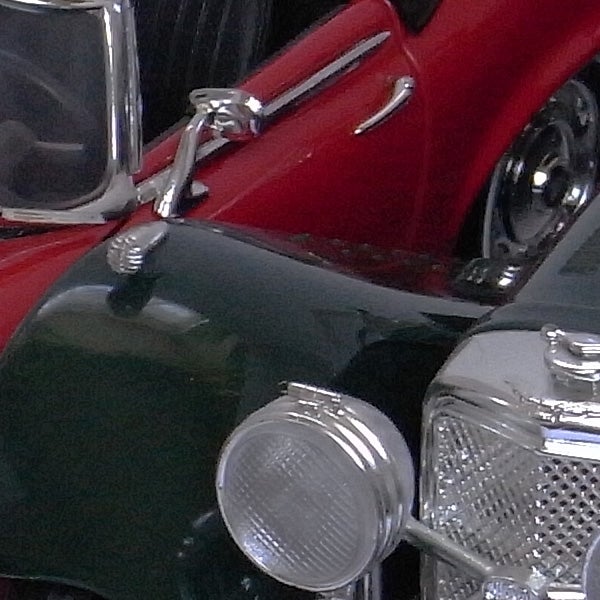 At 400 ISO the image quality is a lot worse, with bad distortion in both the red and green areas, and a lot of noise plainly visible. 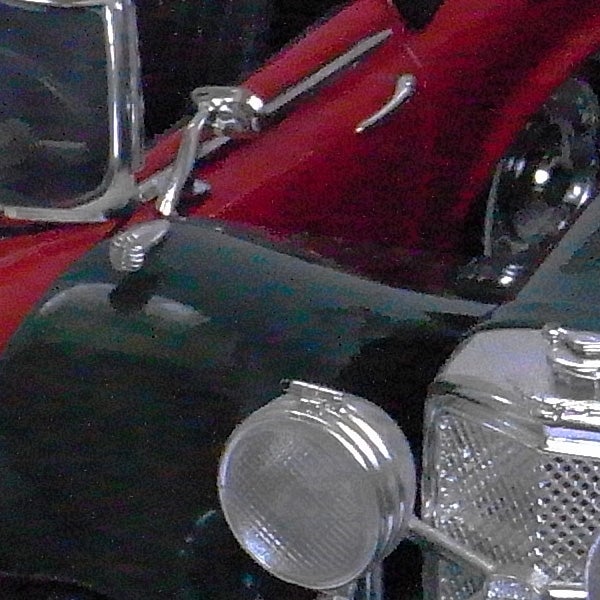 Quality is worse still at 800 ISO. 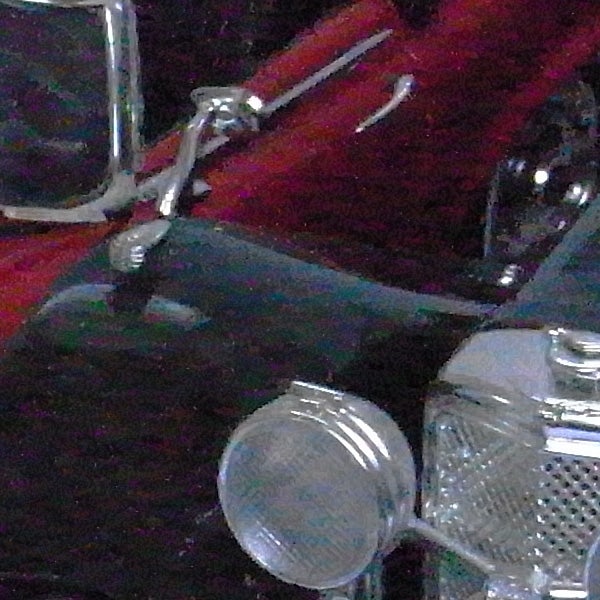 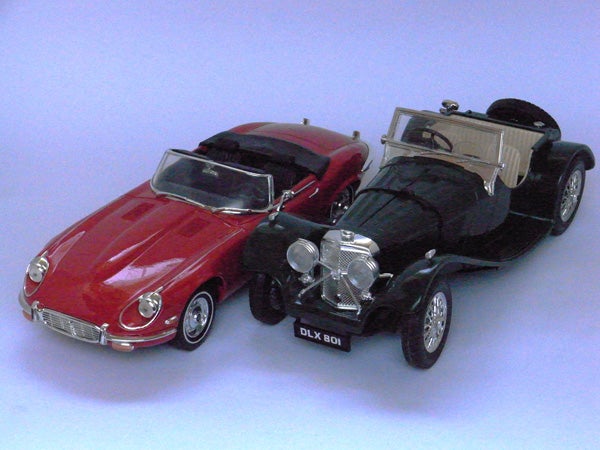 The same inaccurate white balance is visible in this full frame at 1600 ISO. 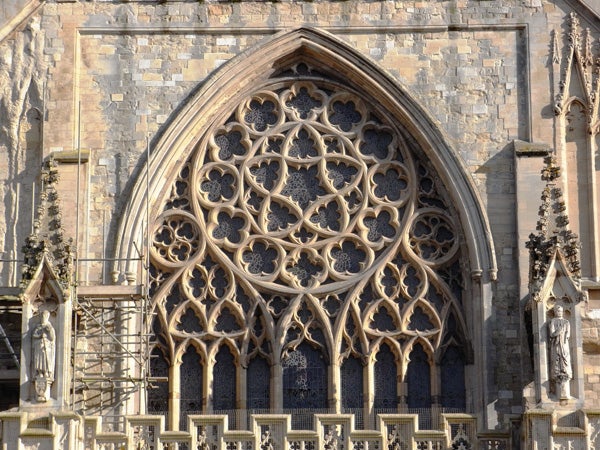 Here’s the usual test shot of the west window of Exeter cathedral to compare detail and sharpness with other cameras. Click on the image above to download a full-size version, or see below for a full-res crop. 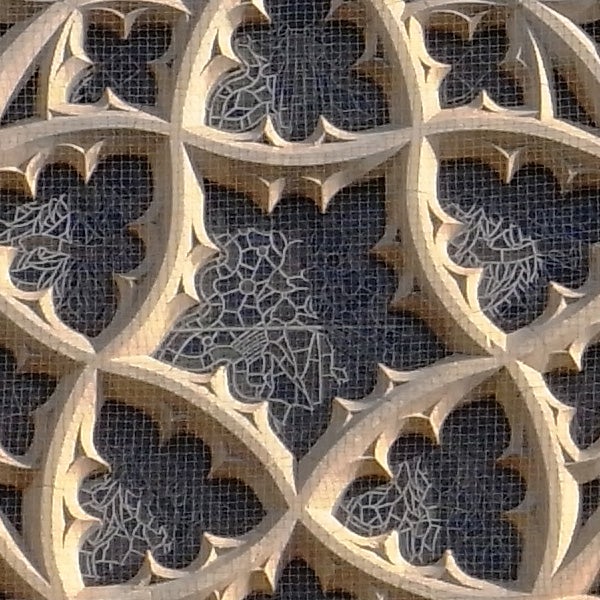 The level of detail captured by the lens is impressive, but unfortunately the sensor just can’t match the image quality. 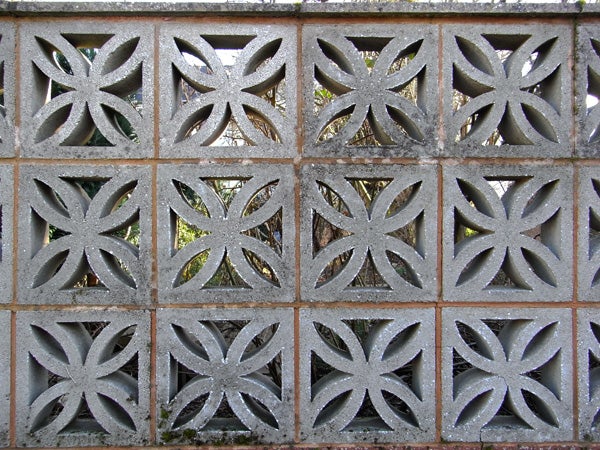 Whether it’s the quality of the lens or some clever automatic post-processing, this 28mm wide-angle shot shows no barrel distortion. 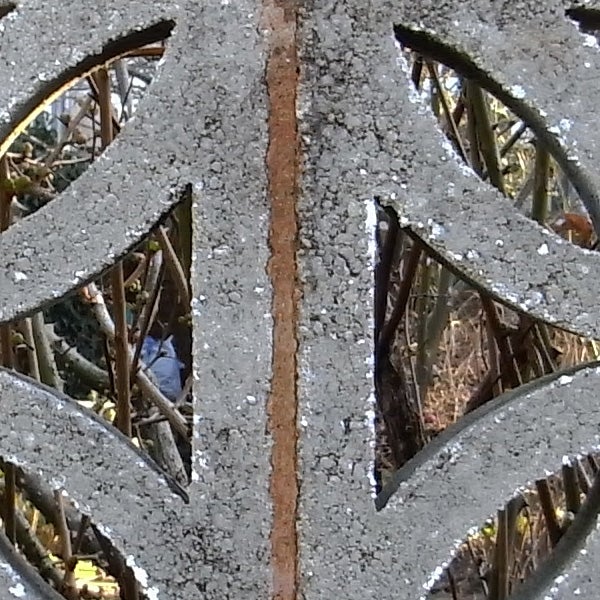 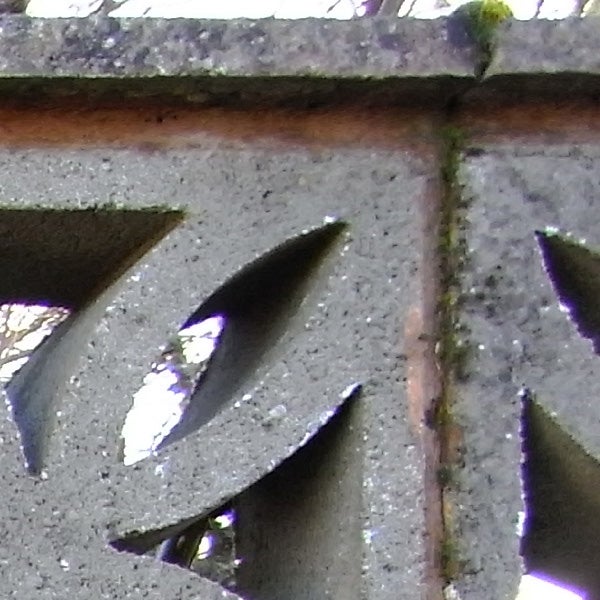 Corner sharpness isn’t too bad either, although there is some purple fringing around the highlights. 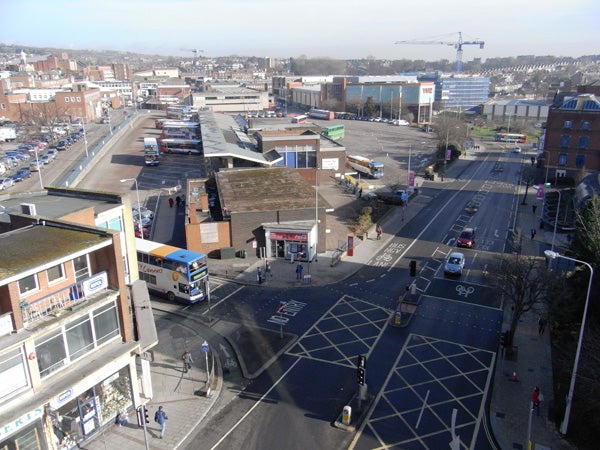 The 28mm-equivalent wide-angle is great for wide panoramic scenes of the local bus station. Not to worry though, as soon as the economy picks up theyr’re going to demolish it and build another large, ill-conceived and unpopular shopping centre, because heaven knows we just cant get enough expensive fashion boutiques. 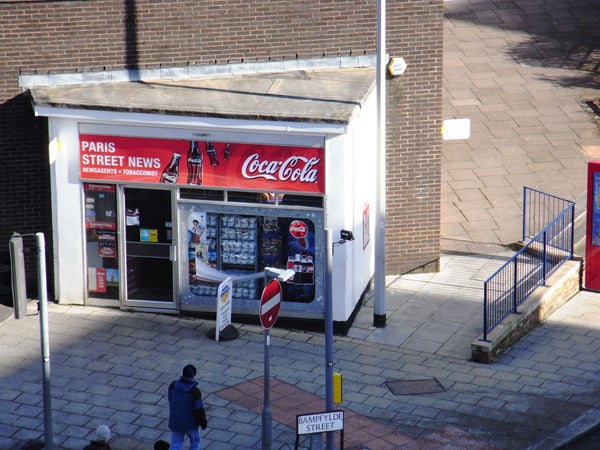 The 200mm-equivalent telephoto end can zoom right in on this strange little shop, which always feels overcrowded even if you’re the only one in there. 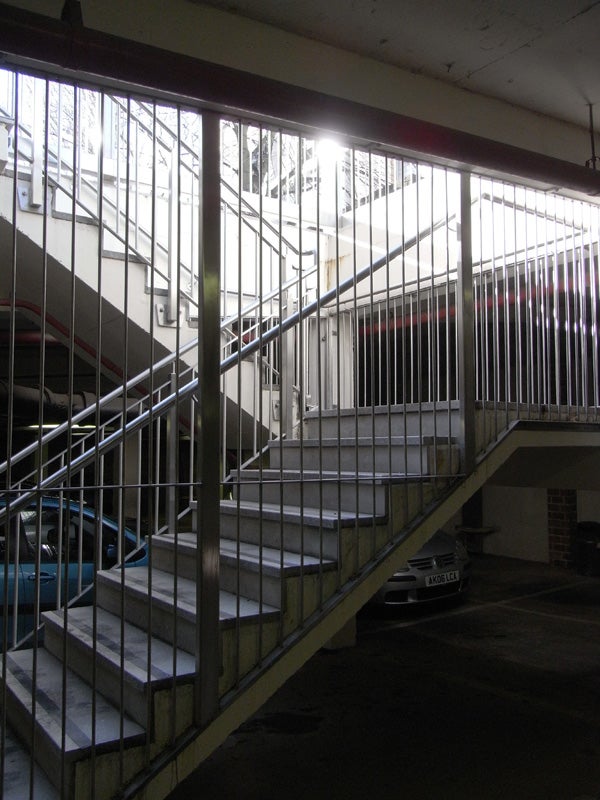 Just to be contrary, the R10 actually has excellent dynamic range, with plenty of shadow and highlight detail in this high-contrast shot. 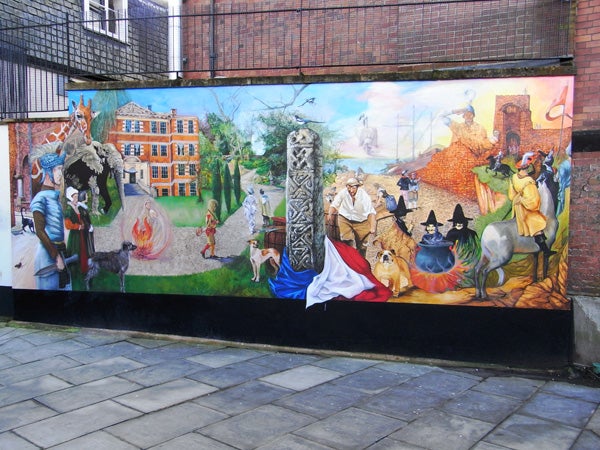 Colour reproduction is bright and vivid, but if you want it to be accurate you’d better use manual white balance. 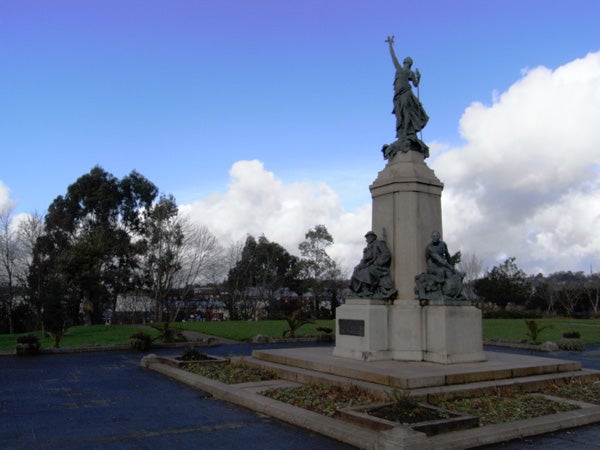 There is a strange red tint along the top edge of this frame, most likely another white balance problem.