Anyone who’s looked into buying a digital camera recently will have noticed that the biggest defining characteristic of the range of cameras on offer is conformity. Every manufacturer’s range is pretty much exactly like that of their competitors in terms of size, specification and price. In a market dominated by mid-range 3x zoom 6MP compacts, it’s a brave company indeed that breaks the mould and launches something completely original. However with the introduction of the GR Digital, Ricoh has done exactly that. 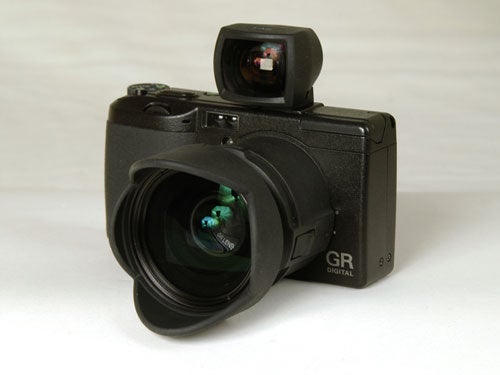 On paper at least it looks like a terrible idea. It is an 8-megapixel compact with a fixed (non-zoom) 28mm-equivalent lens, but with a list price of £399.99, about £150 more than most of the current crop of 8MP zoom lens cameras, such as the Olympus mju 800, Pentax Optio A10 or Ricoh’s own Caplio GX8. However it is £100 less that the list price of the Canon PowerShot S80, which is currently the benchmark for high-end 8MP compacts.


The GR Digital was launched in September 2005, nearly seven months ago as I write this, but for some reason it is still not widely available from the online discount retailers. This is probably because it is aimed not at the mass consumer market, but at the hobbyist and enthusiast photographer who is prepared to put up with a little inconvenience in exchange for total creative control and superior image quality.


The GR Digital is based on the concept and some of the design elements of the acclaimed Ricoh GR compact 35mm film camera series launched 10 years ago, which also featured a very high quality fixed wide-angle lens. For the GR Digital, Ricoh has developed a fixed 5.9mm F2.4 lens of a unique design and extremely high optical quality, and has matched it with a 1/1.8in 8.13 megapixel CCD sensor and the new GR Engine image processor, designed to produce extremely sharp images with natural colour and low noise. 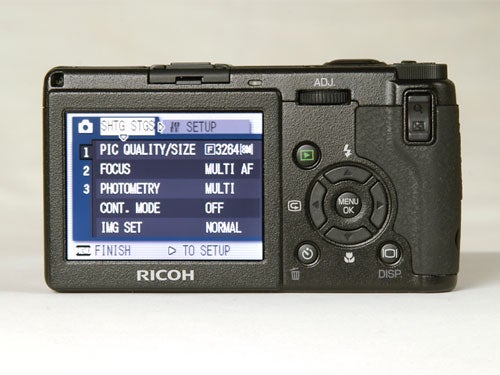 Like the original GR it is also designed as the core of a system of accessories, currently including an extension adapter, and ultra-wide angle 24mm lens and an optical viewfinder, available as a kit with the camera as the GRD Creative Set at an RRP of £699.99. It is this kit that was supplied for this review.

On first viewing, the GR Digital looks unremarkable. It is an inconspicuous matt black slab, very flat and square in shape, with the lens retracted almost flush with the body. It is a very slim camera, just 25mm thick, and can easily fit into a pocket. The various accessories in the Creative Set fit into a small bag (supplied) and are also pocketable. The camera is very solidly built and feels quite heavy for its size. It has a magnesium alloy body with a tough scratch-resistant finish that can easily survive a few knocks. The GR film cameras were very popular as travel cameras for this very reason. 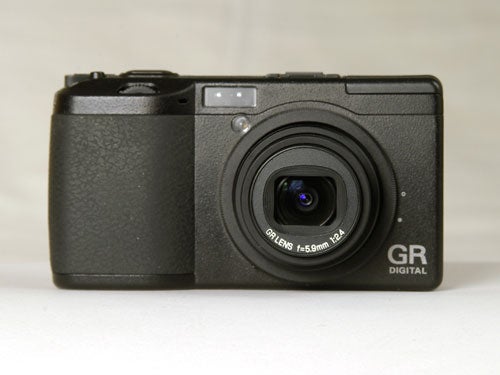 As soon as you pick it up you can start to feel the quality. It has a nice rubberised finger grip on the right that wraps around the body of the camera to a raised thumb grip on the back, and feels exceptionally comfortable in the hand. The controls are very well laid out and fall neatly under the thumb and forefinger.


The big 2.5in LCD monitor has a resolution of 210,000 pixels, making it one of the sharpest around, and has a low-reflection coating and adjustable brightness setting, which would have been very helpful if it hadn’t been grey and cloudy all week.


A great deal of attention has been paid to the design of the control system, resulting in one of the nicest interfaces that I’ve ever used on a digital camera. It has most of the standard features, including macro mode, 10sec/2sec timer and five flash modes that are controlled via either separate buttons or the D-pad. It also has a very comprehensive multi-page menu system, but it is the brilliantly implemented quick shooting menu that provides the total photographic control and makes the GR Digital a real pleasure to use.

Like many top-end SLR cameras it uses a dual control wheel system. Pressing down on the Adjust wheel brings up and selects between four on-screen menus, which you then scroll through using the front wheel. Two choices on the menu can be pre-set by the user, with options including ISO, white balance, focus mode, metering mode, picture quality, drive mode, auto bracketing, and sound recording. With practice it is possible change most major settings in just a couple of seconds.


The two control wheels are also used to adjust exposure in the manual an aperture priority modes, which is a lot quicker and more intuitive than most of the D-Pad based adjustment systems found on other high-end compacts. The other useful control is the rocker switch which is in the place usually reserved for the zoom control. This adjusts exposure compensation, and is also used for manual focus duties. 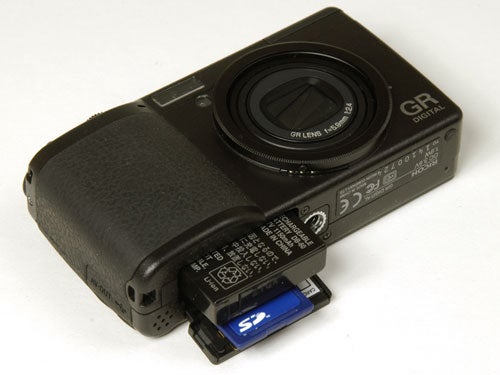 Performance is extremely good, with the camera capable of starting up and taking a focused picture in under two seconds. A shot-to-shot time of 1.7 seconds isn’t particularly fast, but it can keep this rate up until the memory card is full, which is pretty cool. The supplied battery is a big 1150mAh Li-ion rechargeable, which lasted for a whole day’s shooting, however uniquely it can also accept two AAA-sized batteries thanks to a clever sprung panel in the battery compartment. Using the accessory viewfinder with the monitor off will also greatly extend battery life. 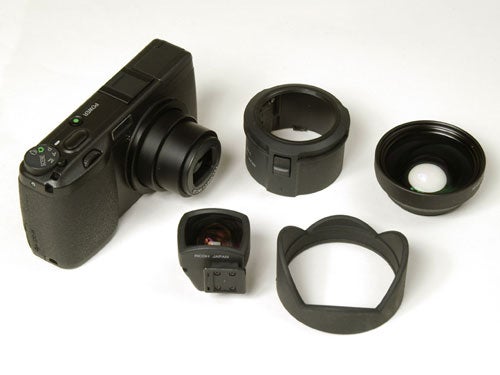 The GR Digital is loaded with features that will appeal to the enthusiast user, including live exposure histogram, spot metering, an aperture range from F2.4 to F9.0, a shutter range of three minutes to 1/2000th sec, an ISO range of 64-1600, an outstanding 1.5cm macro range and most importantly a RAW file mode. Ricoh claims that the GR Digital will produce image quality of professional standard, and I’d have to say that I agree, but with certain reservations.


Professional digital SLRs use sensors that are physically about nine times bigger than the 1/1.8in format sensor used in this and most other high-end compacts, and consequently have greater dynamic range, inherently lower image noise and produce a generally more detailed image. That being said, I have had photos taken on 1/1.8in sensors accepted by several leading professional photo agencies, and I would say that photos shot on the GR Digital would certainly qualify. 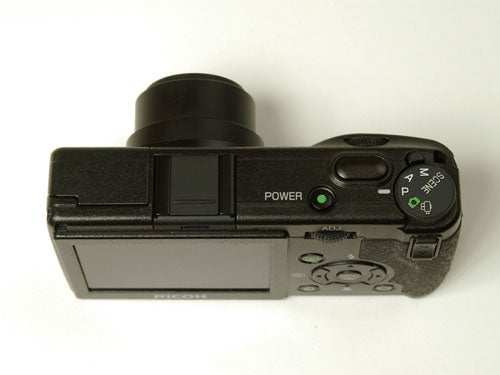 Shooting with just the standard lens the image quality is simply phenomenal, easily among the very best I’ve seen from any non-SLR camera. The GR lens lives up to its boasts and produces pin-sharp high-contrast detail right into the corners of the frame without even a hint of barrel distortion. Focusing is quick and accurate under nearly all lighting conditions thanks to the AF illuminator, and exposure is consistently spot on.


Image noise is non-existent at 64 and 100 ISO, and is very well controlled at higher settings. Colour rendition was simply flawless. Close-up macro results were especially impressive, as you’ll see in the accompanying sample shots. The accessory wide-angle adapter proved to be a little less impressive however, since it produced slight corner blurring and noticeable barrel distortion, but the level of detail and overall quality remained very high.


Ricoh has produced something unique, a compact camera that will satisfy even the most demanding enthusiast. Its combination of compact portability, robust build quality, superb handling, creative control and fantastic picture quality should make it a firm favourite among keen photographers, especially the travel photographers who loved the original GR film camera. An expensive camera, especially for the whole kit, but well worth the money.

Note: These outdoor shots, including the ISO test shots, were all taken during a very cloudy weekend, under lighting conditions that hardly do justice to the picture quality of which this camera is capable. Hopefully I’ll have the opportunity to shoot some better pictures soon, at which point maybe these pages can be updated. 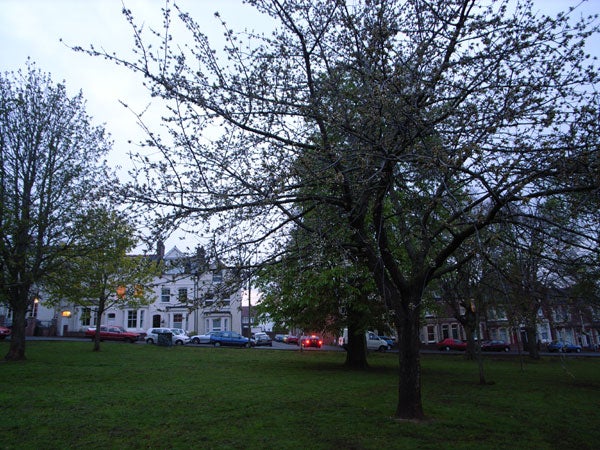 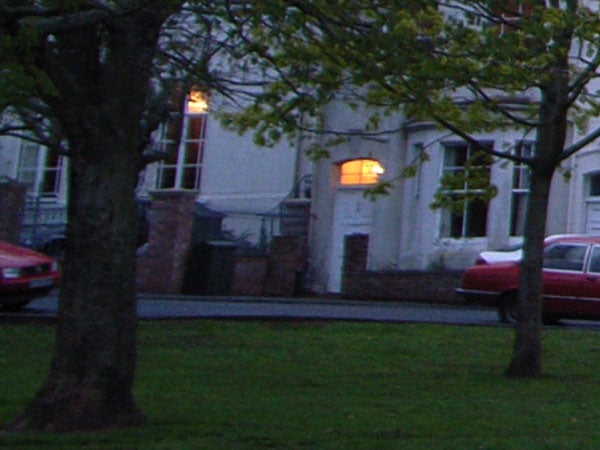 At this lowest sensitivity setting the image is smooth, sharp and totally noise-free, despite the slow shutter speed. 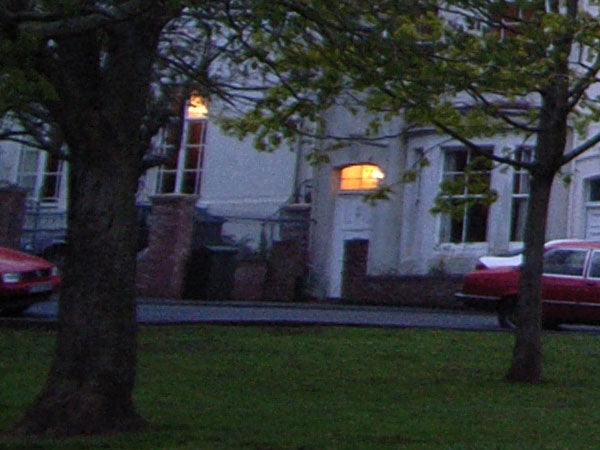 At the next setting up there is still no image noise, eve though it was practically dark by the time this shot was taken. 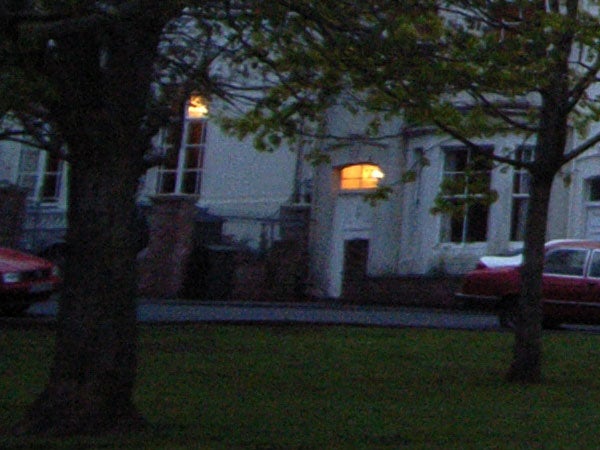 At 200 ISO there is a slight roughness to the image and some slight colour speckling, but image quality remains very high. 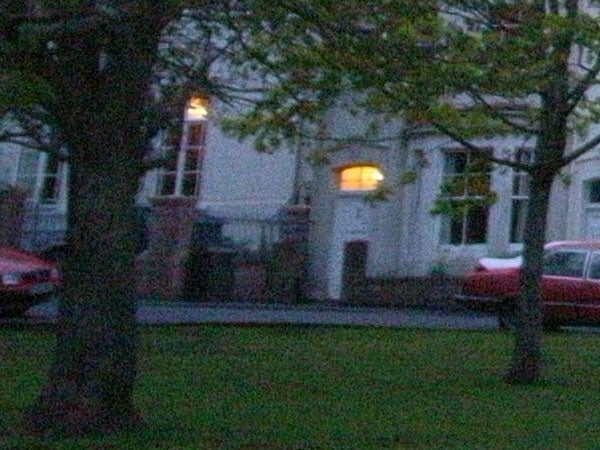 At 400 ISO there is definitely a pattern of noise right across the image, and a slight failure of exposure reciprocity has over-exposed the image. 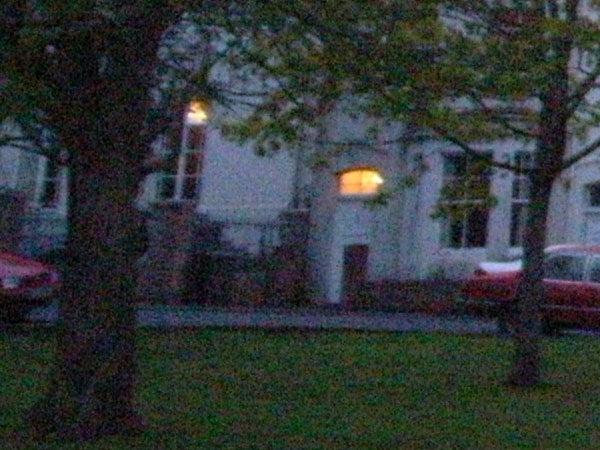 At 800 ISO the image is now quite noisy, but I’ve seen worse at lower speeds from other cameras. 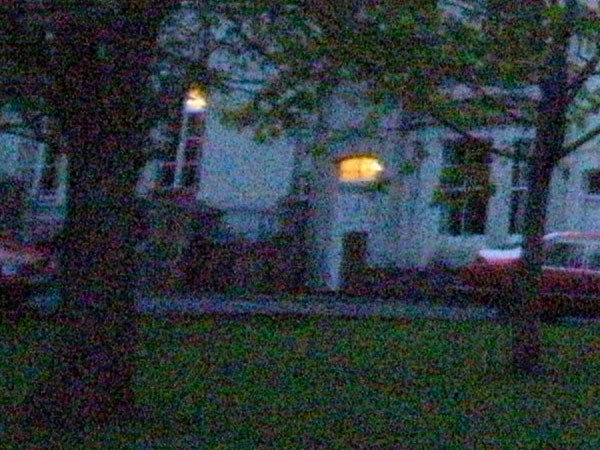 At the highest ISO setting the image is now very noisy, but if you need a shutter speed of 1/125th of a second in this kind of light then it’s not too bad. 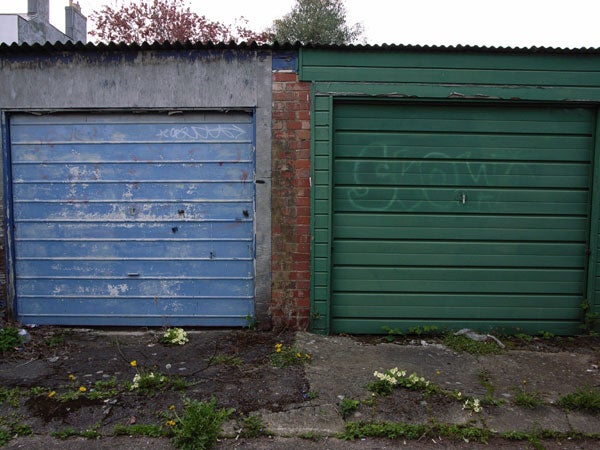 This is normally the shot I take to show barrel distortion, but you’ll notice that the parallel lines are dead straight. That roof really is bent. 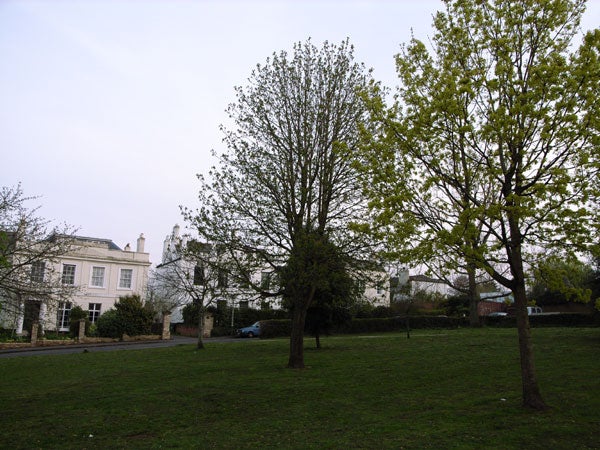 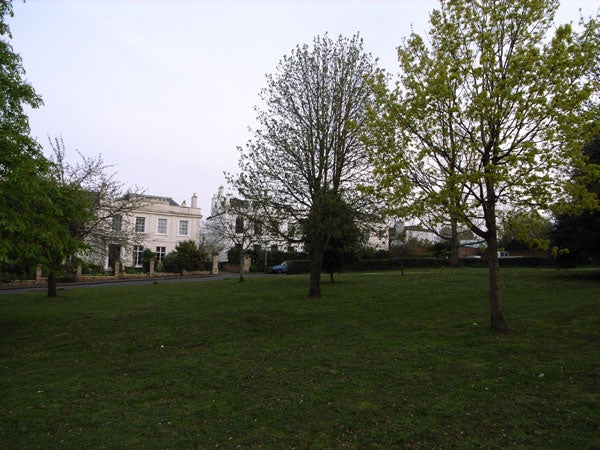 Add the 24mm adapter and you get a little more into the scene, but there is some slight softness in the very corners of the frame. 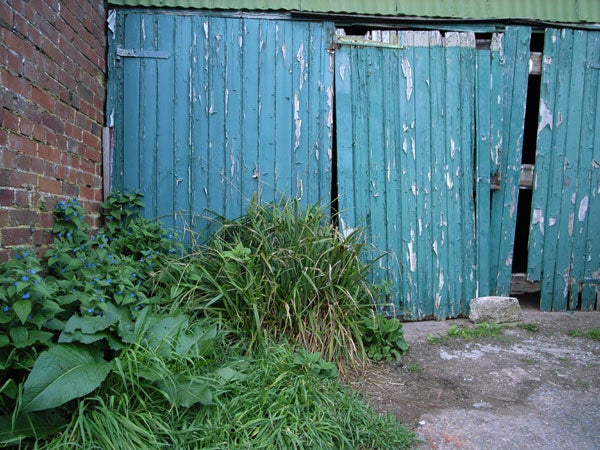 This shot was taken hand-held at 1.40th of a second, with no vibration reduction or image stabilisation. That’s what good handling means. 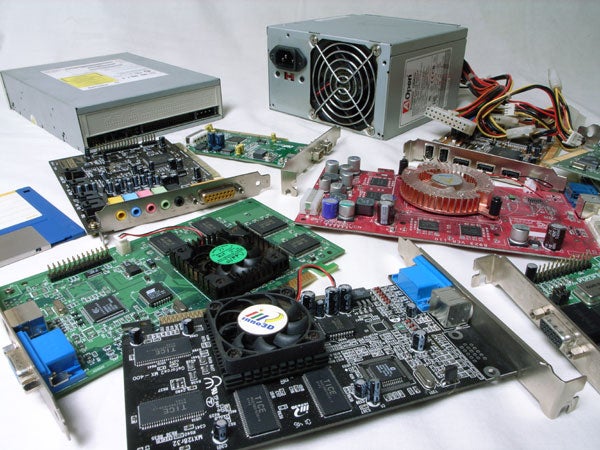 The minimum aperture of F9.0 produces good depth of field. I’ll send a Mars Bar to the first reader who can correctly identify every component in this shot. 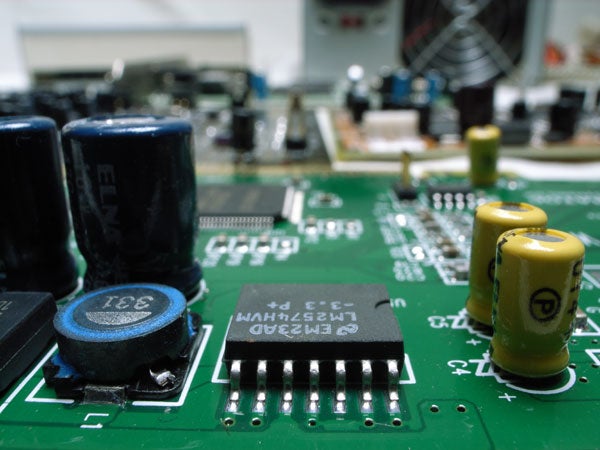 The close-up performance of the GR Digital is simply phenomenal. This was taken at a range of about 2cm using an external flash. 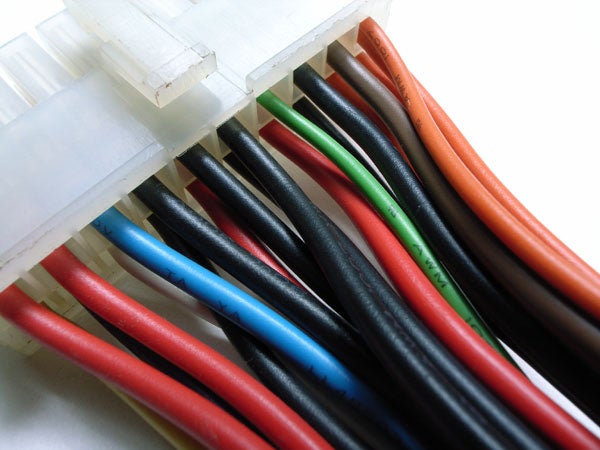