Although most people seem to consider the Panasonic TZ series to be the definitive long-zoom travel camera, in fact the currently popular format of a compact camera with a flush-folding long-zoom, wide angle lens was actually invented by Ricoh with its innovative Caplio R-series cameras, starting in 2005 with the Caplio R1. That design has evolved over the years through a series of progressively more advanced Caplio R and CX models, culminating in today’s review camera, the new CX4. Ricoh has been launching new CX models at an incredible rate; it’s only just over a year since we reviewed the CX1, with the CX2 following this time last year. Earlier this year we took a look at the excellent CX3, so what’s new for the CX4?

The answer, unfortunately is ‘not much’. Ricoh has long had a policy of incremental upgrades, but comparing the specification charts for the CX3 and CX4 is like playing a game of “spot the difference”. They have the same f/3.5 – f/5.6 10.7x zoom lens (28-300mm equiv.), the same back-illuminated 10.0 megapixel CMOS sensor, the same ultra-sharp 920k three-inch LCD monitor, and the same box-like all metal body with almost identical dimensions. In fact the body design hasn’t changed significantly since the R8 launched in 2008. 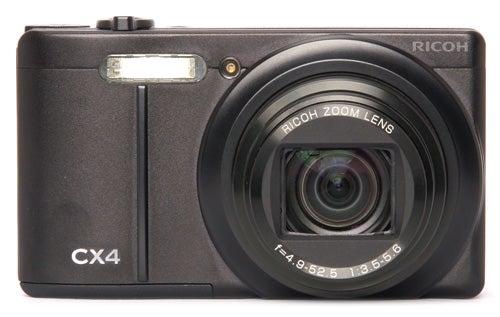 In fact there are a few significant differences between the CX3 and the CX4, but you have to look pretty hard to find them. They include the addition of a subject-tracking autofocus mode, a couple of extra Creative Effects modes and “Night Landscape Multi-shot” to the scene mode menu, and the sensor-shift image stabilisation system has been improved. In a highly competitive market it’s easy to see why a camera company would want to keep its products up to date. Many of the latest travel cameras have added features such as high quality lenses, stereo audio recording or built-in GPS tracking with viewable maps and landmark databases, but it seems that with the CX4 Ricoh has launched a new model to add just a couple of fairly trivial features to the menu, something that other manufacturers might have done with a firmware update.

Although the R8 body design is beginning to look rather dated after two years there’s no denying that the CX4 is a well made camera. The body shell is all aluminium, with tight panel joins, solidly mounted controls and a strong metal hinge on the battery/card hatch. Even the small plastic hatch covering the USB and A/V socket has a proper hinge rather than the usual plastic tether. The handgrip on the front has lost the textured plastic cover, but has gained a small ridge which does provide a secure and comfortable grip. On the back there is a plastic thumb rest feature which also helps, and the camera is easy and comfortable to handle. 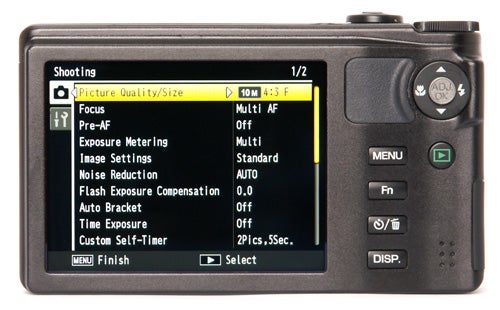 The control layout is identical to the CX3, but this is no bad thing. Ricoh’s control interface has always been very good, and the CX4 has the same small small joystick-type control to activate and navigate a handy quick function menu. As before the items appearing on this menu can be customised, with up to four available from a list including exposure compensation, white balance, ISO setting, image quality, focus mode, metering mode, bracketing and flash compensation. As well as this there is a user-customisable function button which can be used to control a long list of parameters.


The three-inch monitor screen has a very wide viewing angle and an effective anti-glare coating, and is exceptionally sharp, with a resolution of 920,000 dots, the kind of resolution usually only found on DSLRs. The menu takes full advantage of this, with a small but very clear text font allowing a large number of items to be displayed on screen, making menu navigation very easy. However there is no option for a larger font size, so anyone with poor eyesight may have a problem with this. Similarly the on-screen data displays use very small text and symbols, leaving plenty of screen area for the displayed image. 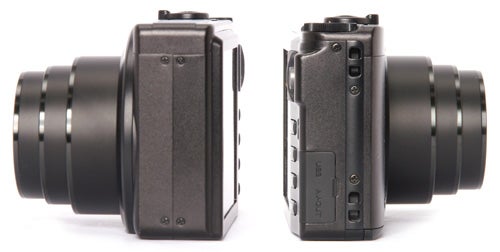 Although the CX4 only adds a few new features to the already impressive list boasted by the CX3, to be fair they are potentially quite useful. The subject tracking AF system works a lot better than some other similar systems that I’ve tried, and is capable of following quite fast moving subjects even if they pass out of the frame for a period. The image stabilisation system is certainly better, and now offers over 3.5 stops of extra stability, and the Night Landscape mode also works well, reliably producing sharp low-noise shots in dark conditions. There are a couple of extra effects in the Creative Effects mode, including a fairly pleasant soft focus effect, a ‘cross process’ filter effect for some interesting colour distortions, and a ‘toy camera’ effect for those deluded fools who think that shooting with a badly-made replica of a cheap 1960s Diana camera is the height of ironic hipster cool.

The overall performance of the CX series has been steadily improving with each new model, but for some reason the CX4 is slower in some respects than its predecessor. It starts up and is ready to shoot in approximately 2.7 seconds, which is pretty respectable, but actually slightly slower than the CX3. Likewise the shot-to-shot time in single shot mode is approximately 1.8 seconds, again very fast by current standards but slower than the CX3. The CX3’s outstanding continuous shooting performance is unchanged however, with the CX4 capable of shooting 15 shots at 5fps at full 10 megapixel resolution, 26 frames at 30fps and 2MP resolution, or 120 frames at 60fps or 120fps and 640 x 480 resolution. 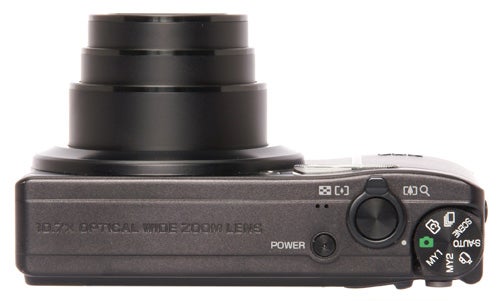 The nine-point AF system is unchanged since the CX2, and is still very fast and accurate with excellent low light performance. The CX4 has a good AF assist lamp with a range of approximately three metres. The flash is the same as the CX3, a good powerful unit with a range of around four metres and a recharge time of just under five seconds, which is faster than average. The CX4 is powered by the same 950mAh li-ion cell and the CX3, and the charge duration seem to be the same too, in other words well over 300 shots.


I really hope that Ricoh makes some significant improvement to image quality for the next upgrade of the CX series, because to be honest the CX4 looks a bit shabby compared to most of its similarly-priced rivals. The exposure system is very inconsistent, varying the exposure by as much as half a stop between consecutive shots of an identical subject. The lens quality could also do with a little attention; its overall sharpness could be a bit better, and while it avoids barrel distortion and corner blurring it does suffer from significant chromatic aberration at the edges of the frame.


One change for the better between the CX3 and CX4 is the ISO noise control. The CX4 has lost the 80 ISO lower setting, but seems to have benefited, with significantly better image quality at 400 ISO, and usable results at 1600 ISO. Even the 3200 ISO maximum setting is better than some recent rivals, although you wouldn’t want to use it for every shot. 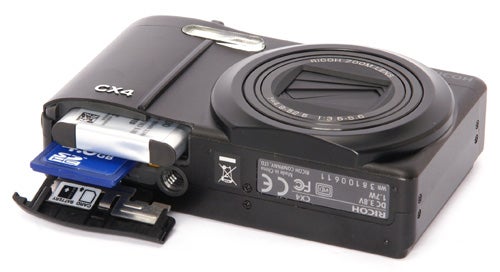 All in all the CX4 is certainly a net improvement over the already impressive CX3, but considering its high price the CX series is now lagging behind recent rivals such as the Casio FH100, Panasonic TZ10 and Samsung WB650. It’s in some danger of being left behind in a fast-moving market. Rather than adding a few bells and whistles Ricoh should be looking at a thorough re-design and a new lens for its next model.


The CX4 continues Ricoh’s tradition of well-made, technically advanced high-performance long-zoom cameras, and introduces a couple of useful new features to an already impressive list. Performance and results are good, however the ageing body design is looking a bit stale, and the inconsistent exposure metering and less-than-perfect lens are disadvantages. 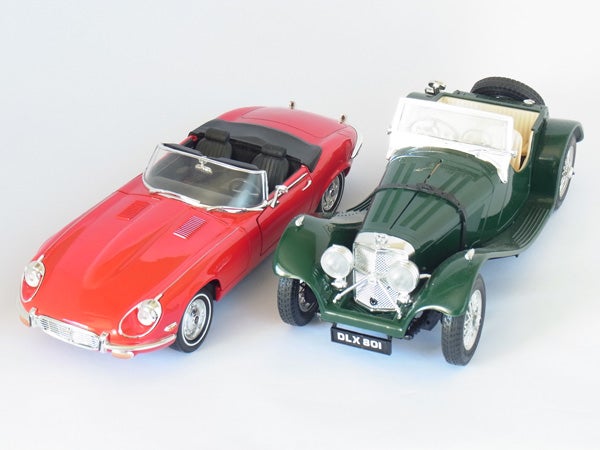 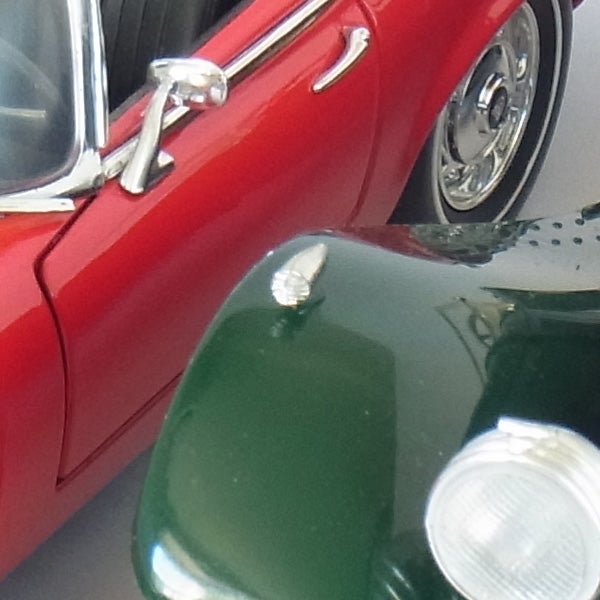 Although the shot is slightly over-exposed the is no visible noise at 100 ISO. 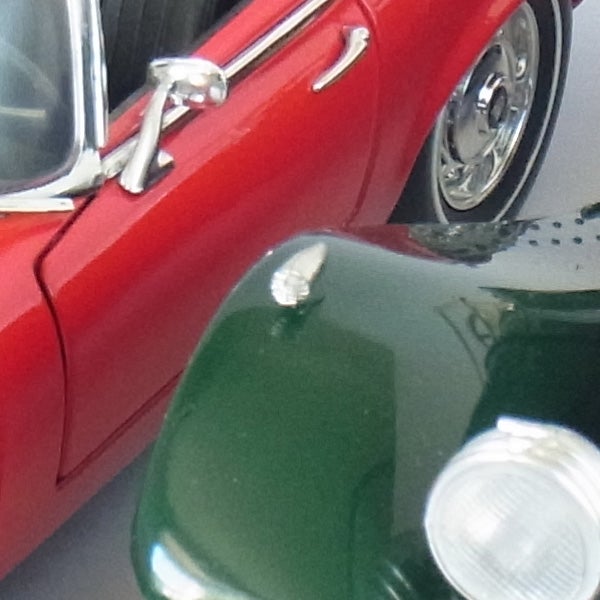 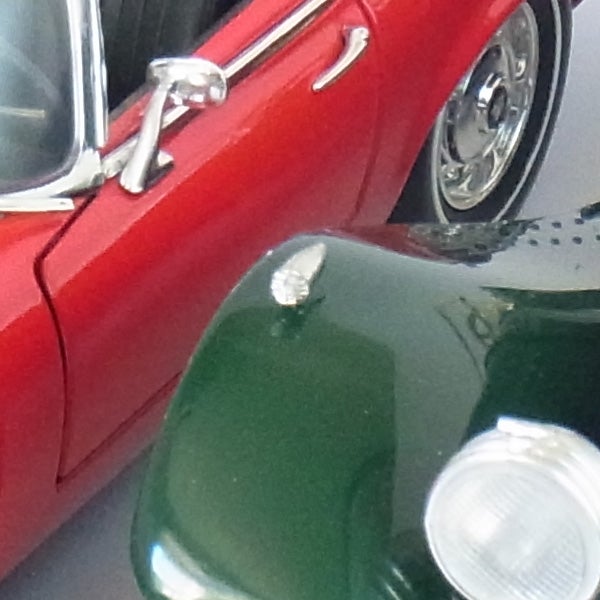 There is some visible noise at 400 ISO, but the overall quality is still pretty good. 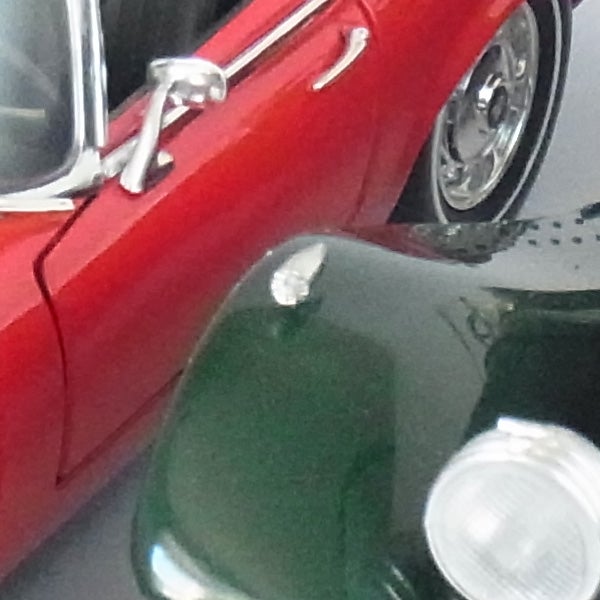 Some noise and a little colour distortion at 800 ISO, but the results are quite printable. 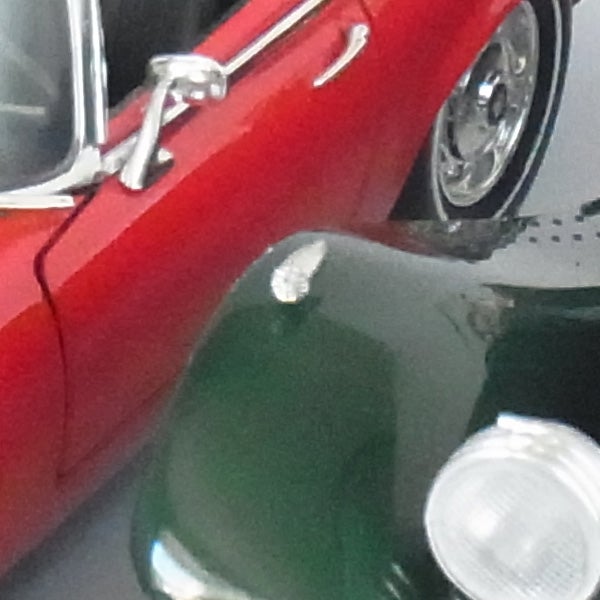 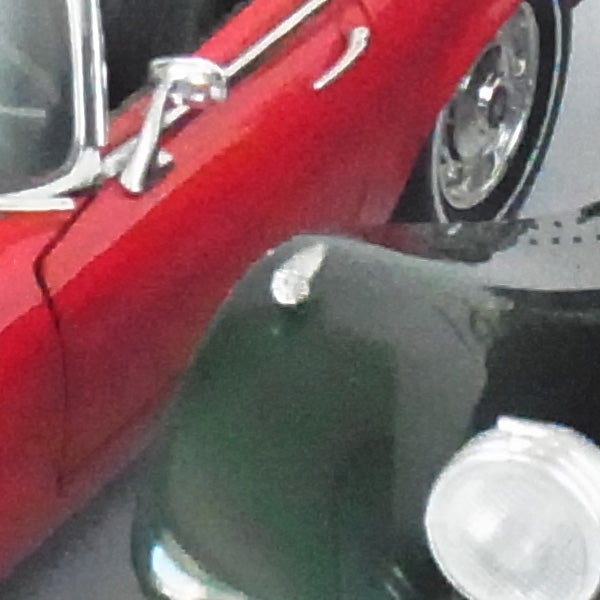 3200 ISO is a bit shabby, but still far from hopeless. 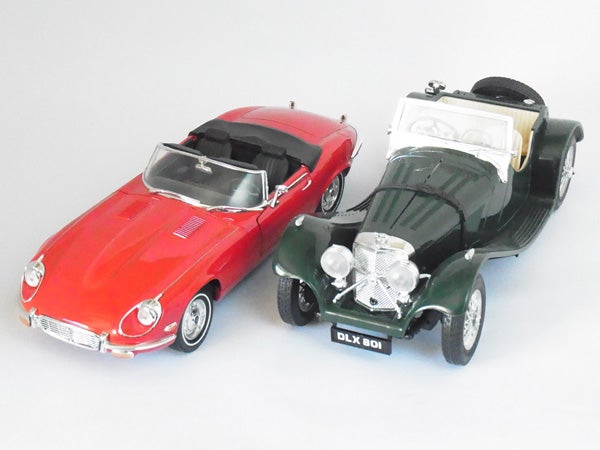 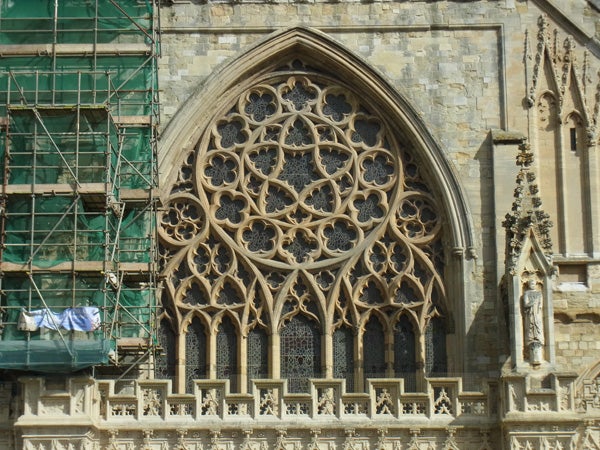 Here’s the usual detail test shot of the West Window of Exeter Cathedral, for you to compare with other cameras. See below for a full res crop, or click to see the whole picture. File size 3.64MB. 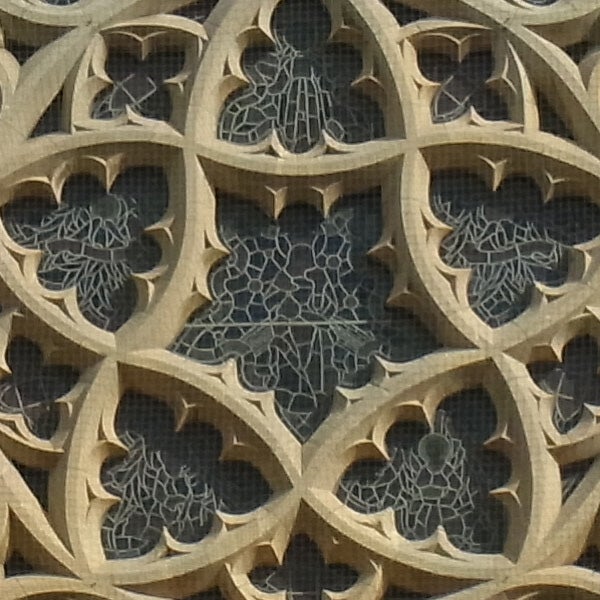 The level of fine detail is good, but the lens could be a bit sharper. 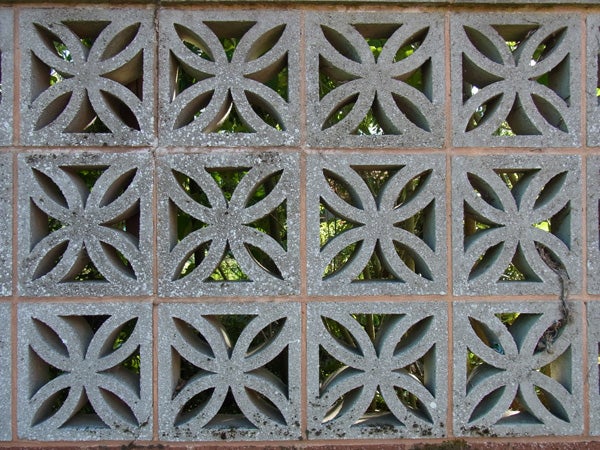 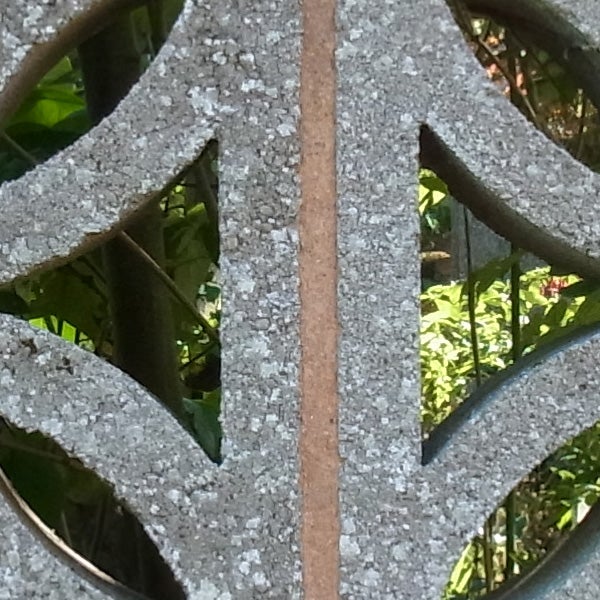 Centre sharpness isn’t bad, but some recent rivals are better. 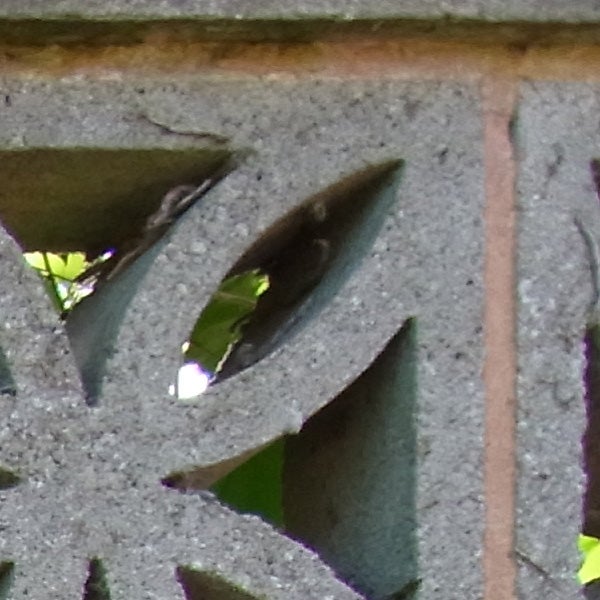 Corner blurring is also kept to a minimum, but there is significant chromatic aberration. 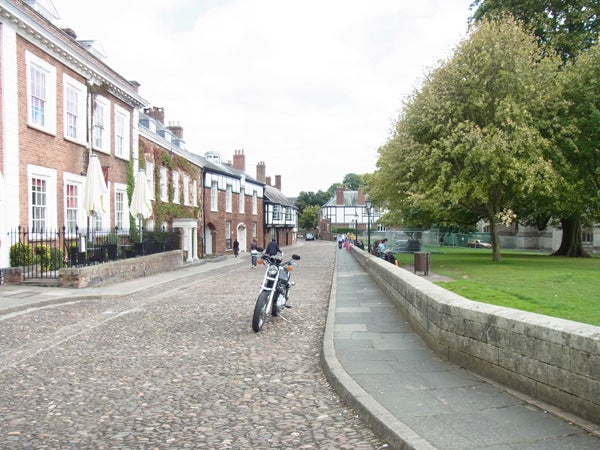 The wide angle is equivalent to 28mm. This shot is badly over-exposed. 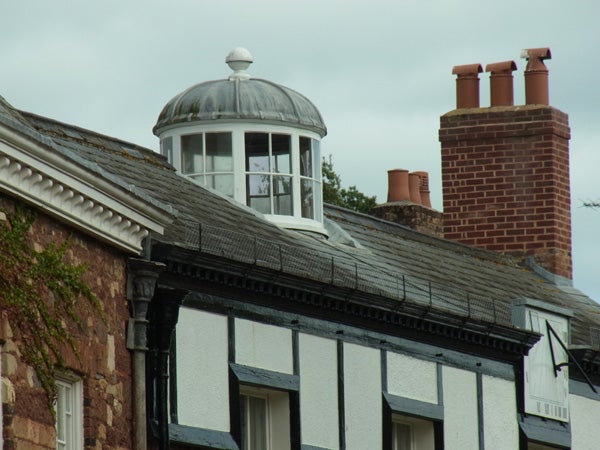 The telephoto end is equivalent to 300mm. This shot, take a few seconds after the previous on, is under-exposed. 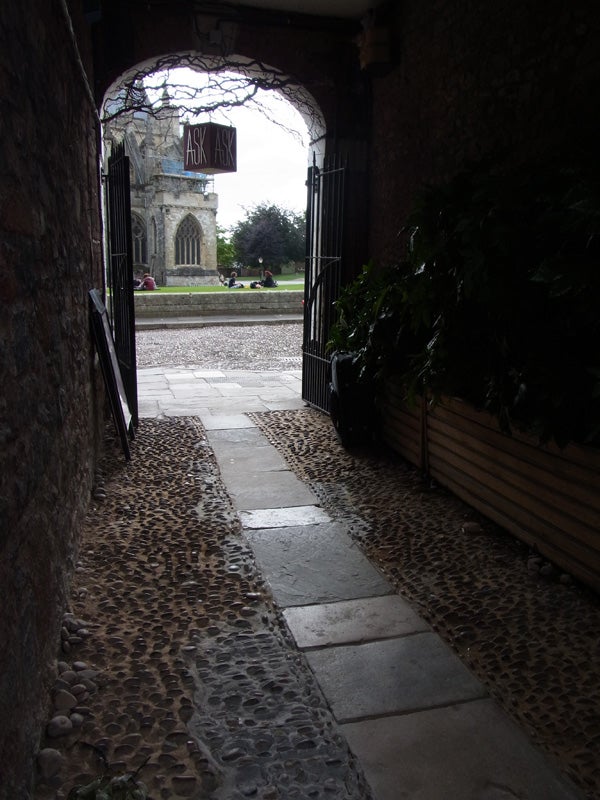 This shot too is under-exposed, leaving very little shadow detail. 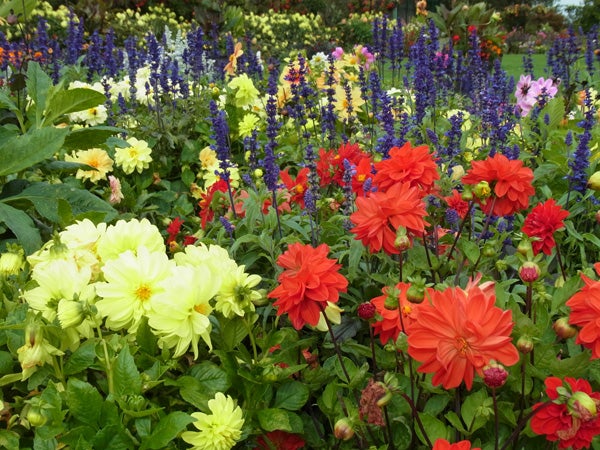 Colour reproduction is very neutral, but saturation detail is good.