Digital cameras have got so sophisticated in the past couple of years that it is getting increasingly difficult for a new model to make any sort of impact, especially if it comes from a company outside of the “big five”. Take this Ricoh Caplio R3 for example. It’s a pocket-sized compact with a 2.5in LCD monitor, 7.1x optical zoom, image stabilization and a 5 megapixel CCD. In most respects it has an extremely impressive specification for just £219, but it seems that most people have completely ignored it. I’ve not seen any other reviews of it, and only a brief press release to announce its launch. 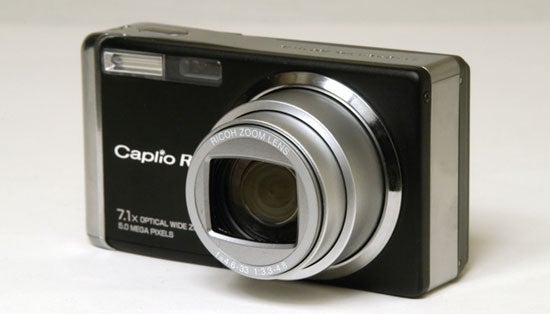 Ricoh is one of the longest-established names in the digital camera market, and at one time was producing the most powerful and technically advanced cameras you could get. It has since lost some ground to arch-rival Canon, but is still capable of producing some outstanding hardware.


The initial impression of the R3 is overwhelmingly favourable. It feels very solidly made and looks stylish and contemporary. It is available in either a black or a silver finish. We’ve got the black version in for review and it does look very nice. At 26mm it is not quite super-slim, thanks to the extra space needed for the big zoom lens, but it is by no means a bulky camera. It looks very square at first, but a closer look reveals that it is subtly sculpted, and feels good in the hand. 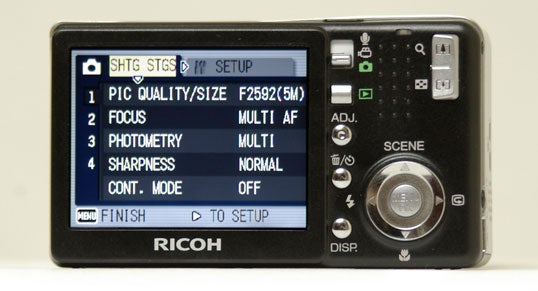 The control layout is nice and simple. The main power switch is on the top plate, and the camera starts up in just over a second, an impressive performance especially considering the big lens that has to be rolled out. Also on the top plate is the button that activates the anti-vibration mechanism, an essential feature in a camera with a long lens like the R3. It works in a similar way to the system used by Konica Minolta in some of its high-end cameras. Motion sensors inside the camera detect any shake or vibration and instantly move the CCD to counteract it, reducing the blurring effect of camera shake at low shutter speeds and long focal lengths. This is my first encounter with Ricoh’s system, and it seems to work very well. I was able to take good sharp hand-held shots at 1/16th of a second at medium zoom, and 1/50th at full zoom, which is a pretty impressive result.

The other controls on the back of the camera are well laid out and clearly labeled. A three-position slider switch selects between shooting still, movie clips or sound recording. The playback button lets you look at the pictures you’ve taken, and the “ADJ” button gives quick access to exposure compensation, and two other functions. White balance and ISO setting are the defaults, but they can be changed for other often-used menu adjustments. The D-Pad has double functions on all four directions, including instant review, flash modes, macro and scene modes. The R3 has an extremely impressive macro mode, able to focus down to just 1cm from the lens, possibly the closest macro distance of any consumer digital camera on the market. 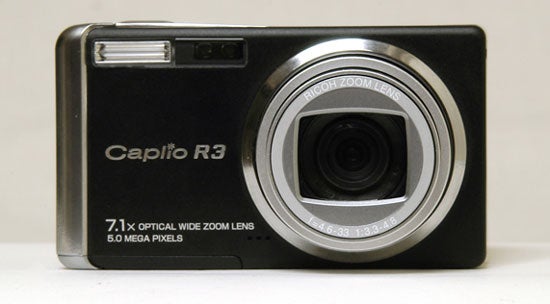 Scene modes include all the usual suspects; portrait, sports, landscape and night landscape, but the R3 also has a few unusual features. The wonderfully clever skew correction mode allows you to photograph pages of text at any angle, it then automatically detects the edges of the page and corrects the perspective. A zoom macro mode allows super-macro photography of very small objects at close range by enlarging them using digital zoom. A high sensitivity mode helps with low-light shooting by enhancing the monitor display, although it does make it very slow and choppy. Unfortunately this last function doesn’t help with low light focusing, which is one of the R3’s few weak points. It has difficulty locking on to a subject in anything other than good light, and since it lacks an AF illuminator this is something of a handicap. 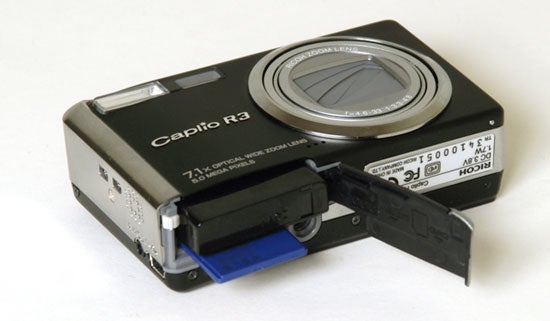 General performance is excellent. Shutter lag is virtually non-existant, and in good light the AF system is respectably fast, giving a claimed 0.09 second delay between pressing the shutter button and the picture being taken. In continuous shooting mode and maximum resolution the R3 can capture seven frames in just under three seconds. It also has modes called S-cont and M-cont, which record 16 frames in about 2.2 seconds, but then records them as one image. M-cont records until the shutter button is released, and then saves the final 16 frames. Because I was only using the camera for a couple of days I was not able to make an accurate assessment of battery duration, but the R3 has a larger-than-average 1150mAh Li-ion battery so Ricoh’s claim of 310 shots on a full charge under normal shooting conditions seems reasonable. 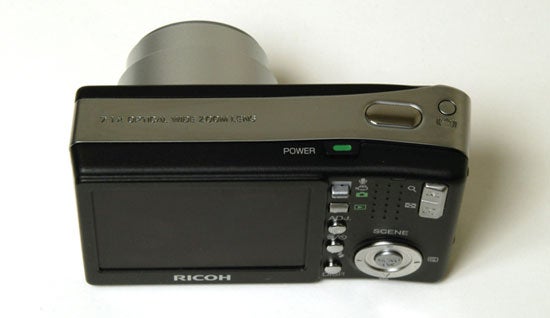 The R3’s most appealing feature is of course its big 7.1x optical zoom lens. This is equivalent to 28-200mm on a film camera, and is a very useful zoom range, combining a good wide-angle and a decent telephoto in one package. Most digital compacts have a wide angle setting of no more than 38mm, so this is an unusual feature. Of course if it was easy to make a compact zoom lens that can do everything then all cameras would have one. Lens design is a compromise between size, weight and optical quality, and in the R3 size and weight have won out. That’s not to say it’s a bad lens, but at the widest angle setting it does suffer from significant barrel distortion, and that’s not all. The anti-shake system is not purely mechanical, and does steal a little bit of the image at the edges of the frame. You don’t notice because the image is re-sized to 2592×1944. However if you shoot on maximum wide angle without the image stabiliser switched on, you get to see the full frame, including some quite nasty vignetting in the top corners of the frame.


Apart from that little problem though, image quality is quite acceptable, with good exposure and colour rendition, although noise levels at higher ISO settings are higher than they might be.


The Ricoh Caplio R3 is an attractively designed and well made camera with a highly unusual list of features, outstanding performance and a very reasonable price tag. The 28-200mm equivalent optical zoom and anti-shake system make it unique, and the exceptionally good macro performance is an added bonus. Picture quality could be better, but on the whole not bad. 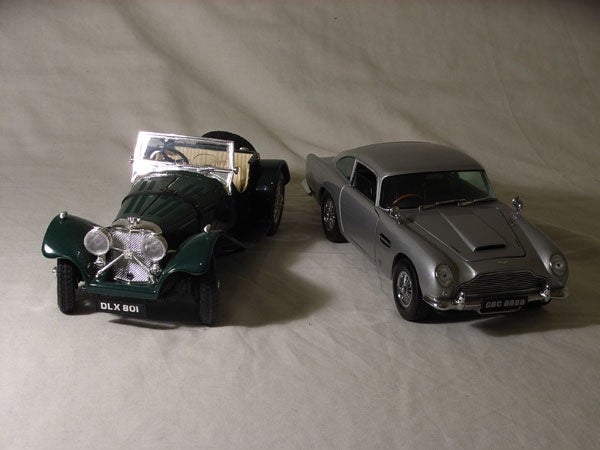 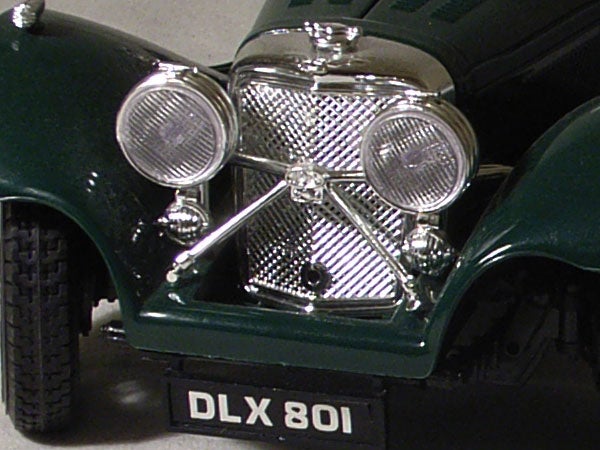 At the minimum setting of 64 ISO the R3 produces a clean crisp image with no trace of noise at all. Lovely. 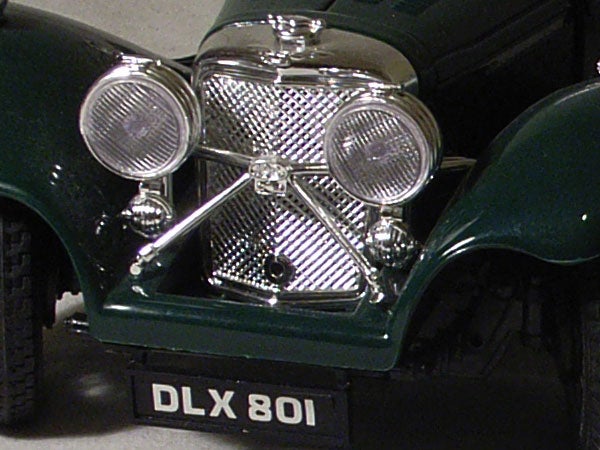 At 100 ISO there is some slight colour speckling visible, but on the whole the shot is clean and quite printable. 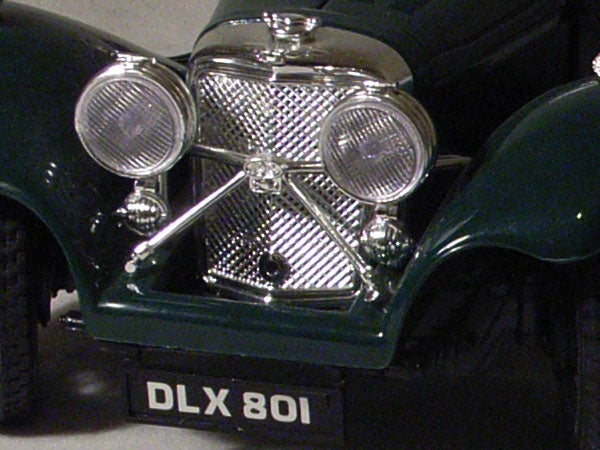 At 200 ISO the colour noise is a lot more noticeable, some fine detail has been lost and colour saturation is beginning to fade. 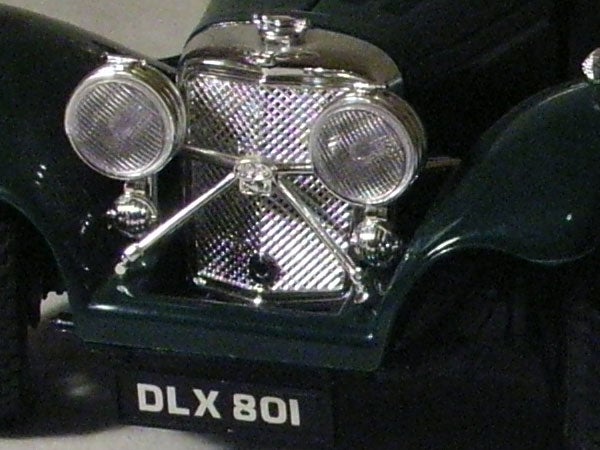 At 400 ISO the image is now very noisy, with large patches of random colour noise in shadow areas. This is a setting for low light emergencies only. 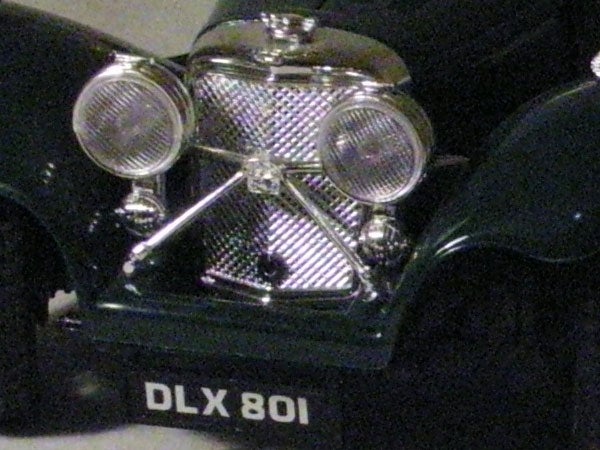 At the maximum 800 ISO the image is so noisy my flatmate just popped his head round the door and asked me to turn it down. 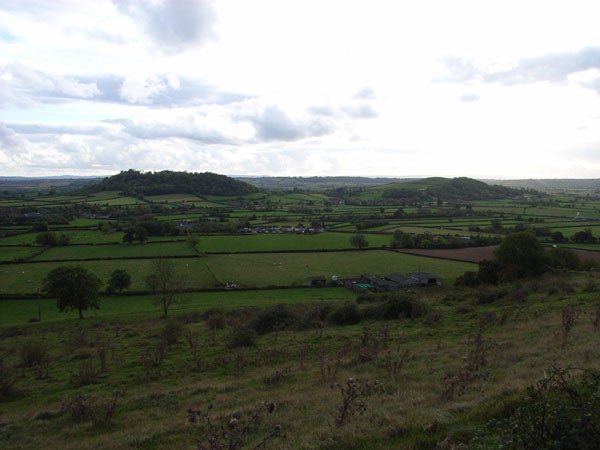 The 28mm-equivalent wide-angle end of the R3’s zoom range is ideal for capturing rolling landscapes like this shot across the Somerset lowlands. 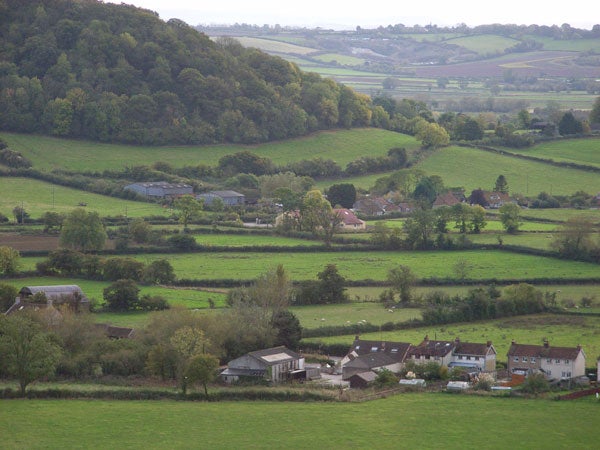 At the 200mm end, the zoom lens is great for picking out details. This picture was taken from the same position as the wide-angle shot above. 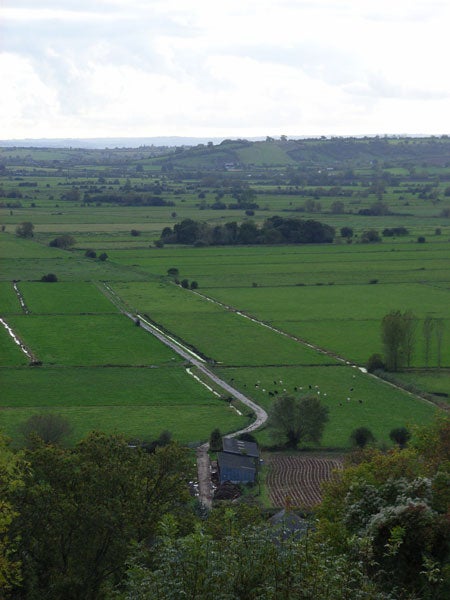 Zooming in about half-way give a good balance between barrel distortion and wide coverage. Detail levels and exposure are both very good. 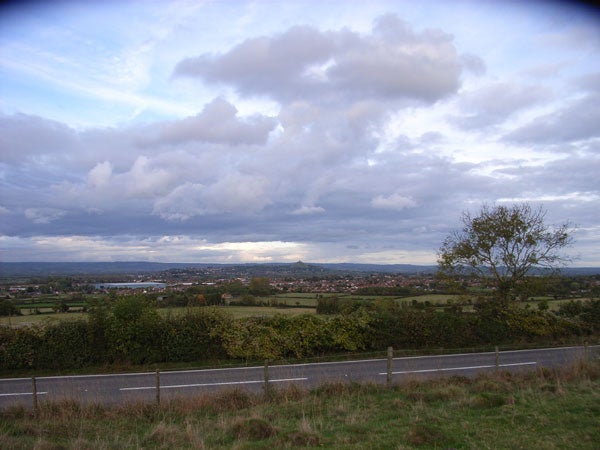 When shooting at wide angle without the anti-shake feature, there is some vignetting, as shown by the dark corners at the top of this frame. 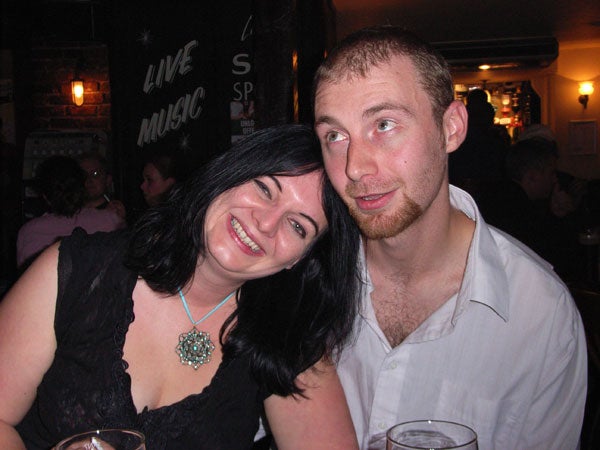 The built-in flash charges quickly, and has reasonably good power output with an effective range of around 2.4m. 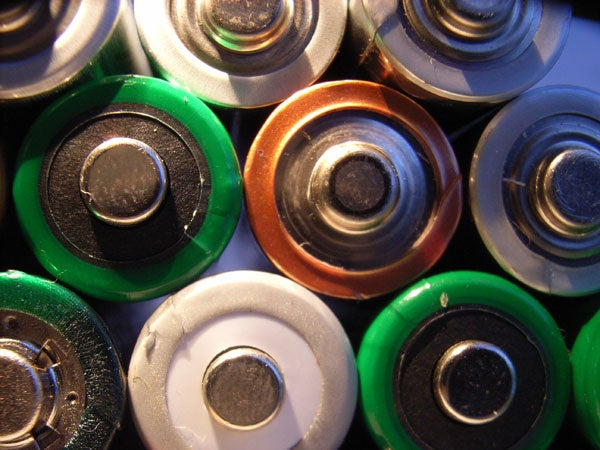 The R3 has an exceptionally good macro function, capable of focusing down to an incredible 1cm from the lens. These are the tops of AA batteries. 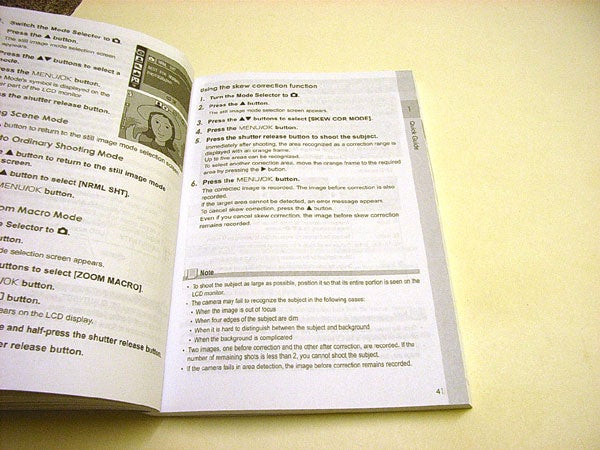 The R3 features a very clever skew-correction function for text copying. Take a photo of a page of text at any angle… 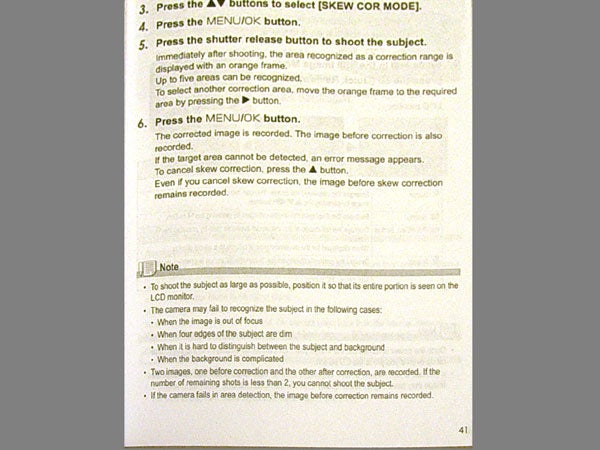 …and the camera automatically detects the edges of the page and corrects the perspective to that of a flat page. Handy for copying those secret plans in a hurry.