Say what you like about Capcom, it has never been one to under-exploit a successful franchise, and when that franchise is Resident Evil that goes double. Counting remakes, director’s cuts, side-projects and gun games, the series is now on its 25th title, and that’s with Resident Evil 6 still to come later this year. Disappointingly, after the excellent Resident Evil: Revelations on 3DS, Resident Evil: Operation Raccoon City is one of the worst games in the Resident Evil canon. Co-developed by Capcom and the Canadian developer, Slant Six, it’s a third-person shooter, set in Raccoon City during the events of Resident Evil 2 and 3, with the focus on online play. 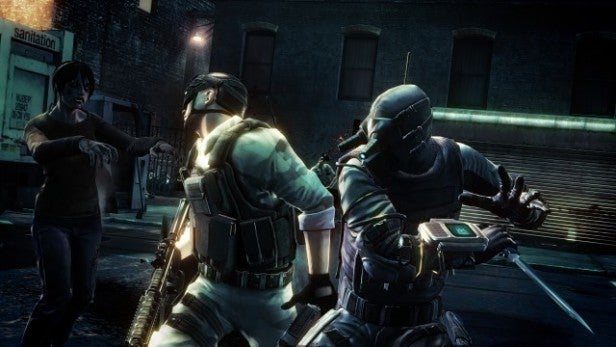 Slant Six is best known for its work on Sony’s SOCOM series; the third-person military shooters that gave the PS2 and PSP their biggest taste of online action, albeit most successfully within the USA. As a result, you might have expected the team to ace the blasting and the multiplayer mechanics, but blow it when it comes to making the game feel like a Resident Evil title. Surprisingly, the opposite is true. Operation Raccoon City does a nice job of keying into the existing Resident Evil storyline, delivering situations, characters and monsters that the series’ long-term fans will love to get to grips with once again. It’s when it gets to the execution that things go horribly wrong.

The premise might be Operation Raccoon City’s best idea. Instead of playing one of the ditchwater dull STARS operatives, as you do in almost every other Resident Evil, you take the part of one of four members of Wolfpack, a group of black-ops specialists working for the fiendish Umbrella Corporation, and charged with tidying up loose ends as the T-Virus runs amok in Raccoon City. While the game has an over-arching storyline, it breaks the action up into a series of discrete missions, which see you exploring such famous Raccoon City locations as City Hall, the police station, the hospital and Berkin’s lab. This gives you the opportunity to experience highlights from Resident Evil 2 and 3 from the other side, and while Slant Six and Capcom have fiddled with events to make them work in a new timeline, it’s still great to pursue RE’s arch-wuss, Leon Kennedy, through the streets of Racoon City, go into action with the brutal HUNK, or see the third game’s mighty Nemesis in action once again. 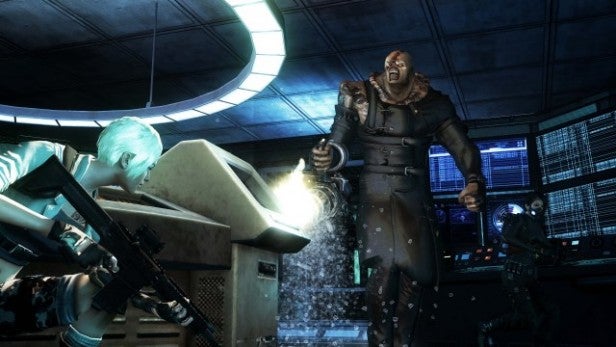 Wolfpack are an interesting bunch as well, with specialists in stealth, demolition, healing, science, assault and marksmanship, all of whom have some special ability they can bring to the fray. Vector, for example, can temporarily cloak, giving you the chance to sneak behind enemies and hit them from behind. Belway, meanwhile, has a range of high-explosive weapons at his disposal. All get a nicely designed leather combat suit and a range of ‘look, I’m really nasty’ tics, and the result is that you get a good feeling out of doing bad things. For once, you can be one of the villains.

Unfortunately, it’s all bad news from here on in. One of Operation Raccoon City’s biggest problems is that it’s designed as a co-op multiplayer game. You can play through the campaign with the other three members of wolfpack under CPU control, but the AI is so wretched and so disinclined to heal that you’ll find yourself dying time and time again, turning each stage of a mission into a test of how much you can be bothered to continue. 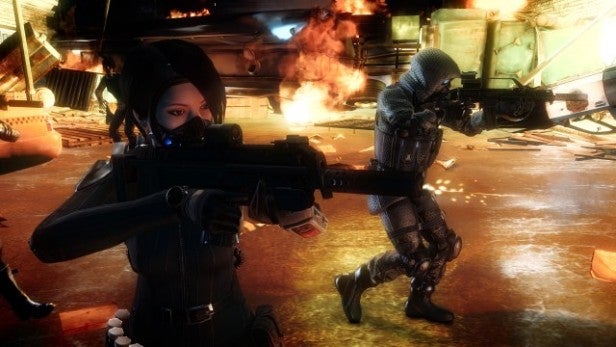 And even played with three other human players, the game just doesn’t feel that good. Movement feels awkward, the cover system doesn’t seem to work predictably. Weapons feel pitifully underpowered against anything but the basic zombies, with Spec Ops enemies that appear to be sporting the latest in bullet-proof balaclavas – at least that’s the only way we can explain why headshots no longer work – and some mutant foes that act like bullet sponges. This doesn’t just make the shooting unenjoyable, it puts it at odds with what we’ve seen in other RE games.

Operation Raccoon City should also have been better paced. The approach most of the time is to thoughtlessly spam you with enemies, none of whom show any real sign of strategy or nous. What big set pieces there are are clumsily handled, with awkward breaks in the action to announce the next big ‘shock’ moment. At times it’s hard to put your finger on why, but Operation Raccoon City simply doesn’t hold together. Put it against a Gears of War or a Vanquish and it’s practically laughable. Heck, even Army of Two or Kane and Lynch: Dog Days do things better. And if you want specifically to play a co-op game where you get to kill zombies, well Left4Dead is so much better that you wonder why Slant Six didn’t effectively clone it wholesale with a Resident Evil skin. 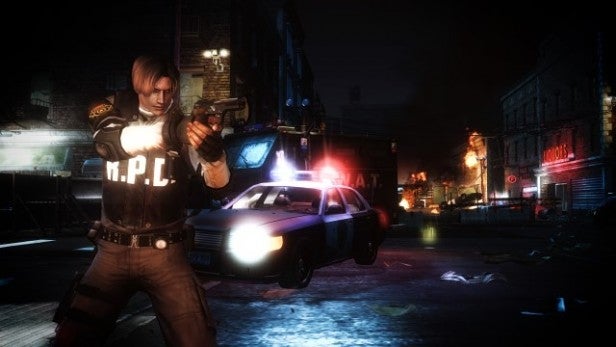 The game isn’t completely without merit. The graphics look nice enough, bringing classic RE locations and monsters to glorious HD life, and there is one interesting mechanic.  In  most of the game you’ll find yourself up against zombies and Spec-Ops forces simultaneously, and by wounding the latter you can cause the former to go bonkers, descending on your hapless victims in a blood-lust rage. 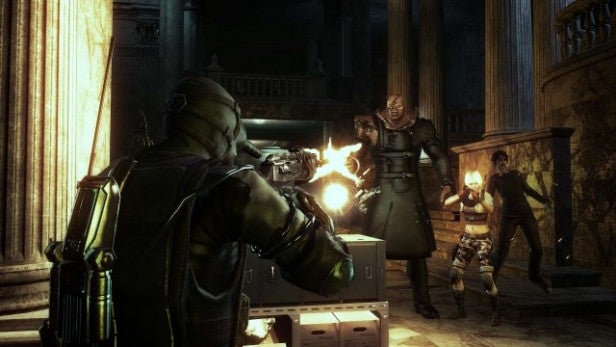 Some recompense also arrives in the form of a semi-decent Versus multiplayer mode, pitching Wolfpack against an equivalent SpecOps force in a selection of team-based game modes, the best of which involves both teams running for the same helicopter in the hope of extraction. These are fun enough, but really nothing to write home about. Matchmaking is slow and arduous and each match takes an age to kick off. It’s OK, and having mutants and zombies on the field to complicate things adds a little to the action, but it’s certainly not worth purchasing the game for. 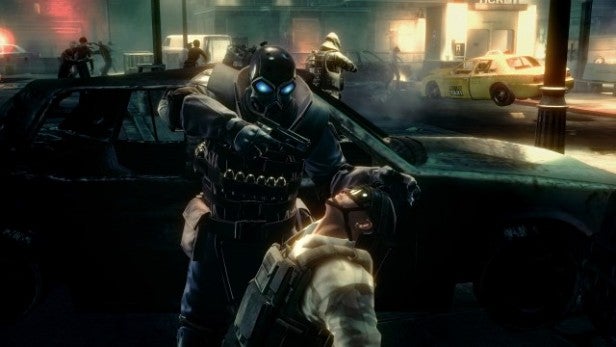 The saddest thing about playing Operation Raccoon City is that you can see the germs of some good ideas, and in its own flawed way it does its best to serve the fans. However, think of other horror-themed, co-op focussed shooters, particularly Left 4 Dead, The Darkness II and the sadly under appreciated FEAR3, and it’s clear that Operation Raccoon City doesn’t have the quality, the ideas or the execution to measure up. It’s a black mark on a series that’s still, to some extent, struggling to regain the form of its glory years.

Verdict
Arguably the most disappointing Resident Evil ever made; a mediocre third-person shooter with shoddy AI and poor level design that does nothing to stand out in a crowded market. It’s a better game in competitive multiplayer than co-op, and RE fans will enjoy the chance to revisit old locations and see old friends (and fiends). Yet while the premise is smart and some isolated mechanics entertaining, the experience as a whole falls sadly flat.