Kick Start was never quite like this. Sure, the classic eighties motorcycle trials show had its share of nasty falls, but did the teenage riders – or their Junior Kick Start equivalents – have to negotiate fiendish courses set over forty foot-high scaffolding, risking fatal flips and stomach churning helmet/plank collisions that make you wince just looking at the replays? 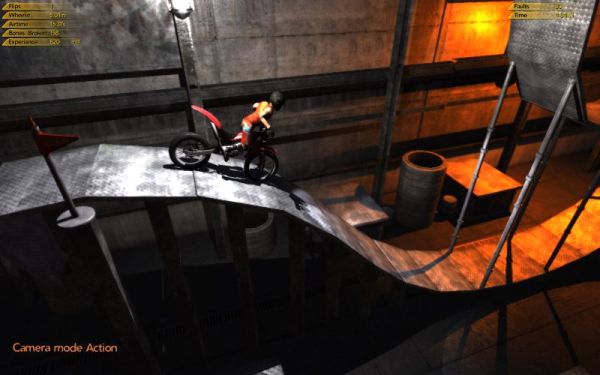 Obviously not, or Dave Lee Travis’s TV career would have been over much, much sooner. Even the mighty Hairy Cornflake would have struggled for words with some of the bone-crunching mayhem going on here. Nor would the dulcet tones of Blue Peter’s Peter Purves have been able to gloss over what happens when a dirt-bike flips at a nasty angle grinding the tyre into the unfortunate rider’s groin. Yeesh – it’s enough to make your eyes water.


Still, Kick Start isn’t the only retro button pushed by RedLynx’s lovely little mover. Remember Wheelie on the Spectrum or Kick Start on the Commodore 64? Well, this is basically a 2008 reworking. On the surface, it’s incredibly simple. Your rider starts on the left-hand side of a 2D scrolling playing field and has to make it to the finish line on the right. In the middle stands a series of ramps, platforms, logs, concrete tubes, and miscellaneous obstacles, some of which may be on fire. You only have to worry about four keys: accelerate, brake, lean forward and lean back. It doesn’t get much more basic than that. 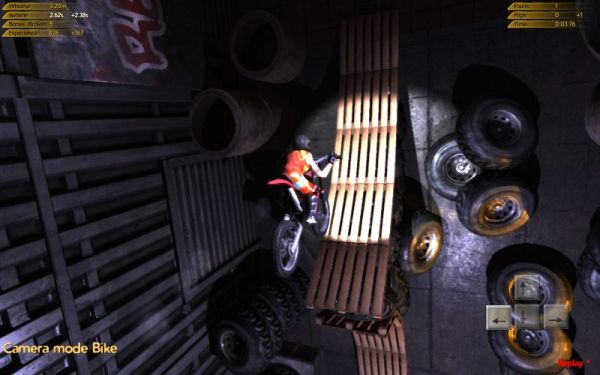 The complexity comes in when you realise that Trials 2 is based on a 2008 standard physics engine, simulating – albeit with a little element of fantasy – the workings of weight, momentum, friction, balance etc. Jumping isn’t just a question of hitting a ramp at speed; you have to keep your rider balanced so that you make the most of the airtime from the take-off, and can hit the landing area at an angle that won’t cause a tragic flip. Making it over a stack of logs or up a fearsome incline requires careful juggling of the lean keys and the throttle. Get it right and you can make your way up in a single charge. Get it wrong and it’s a case of face meets timber, repeatedly and rather painfully.

In effect, then, what at first looks like a weird 2D racer turns out to be a cool hybrid of platform game, puzzle game and entertaining physics simulation. Of all the games I’ve played recently the one it reminds me of most is N+, for the simple reason that both games are all about working your way around a small set of controls and interacting physical forces in order to get from A to B. 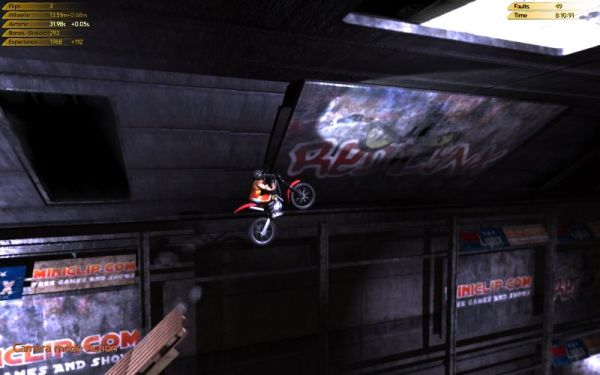 Both games demand some skilful use of the controls – you need to develop a feel for all that jumping, flipping and landing – but both games also demand brainpower. If you can’t make it up that series of ascending ramps or down that bewildering set of downward quarter-pipes, then it’s probably because you haven’t yet found the right approach. Sometimes you’ll spend ages working out what on earth that approach might be, crashing bike and rider again and again and again, but when you finally get it right – Eureka!


Trials 2 is certainly addictive. On the one hand, it’s almost impossible to stop chewing away at a level once you’ve started, no matter how many times you fail. Once you have it worked out, you’ll then be sorely tempted to give it another go, partly because the game is closely integrated with its online leaderboards, meaning you can see exactly how miserable your efforts are in comparison to those of other players. 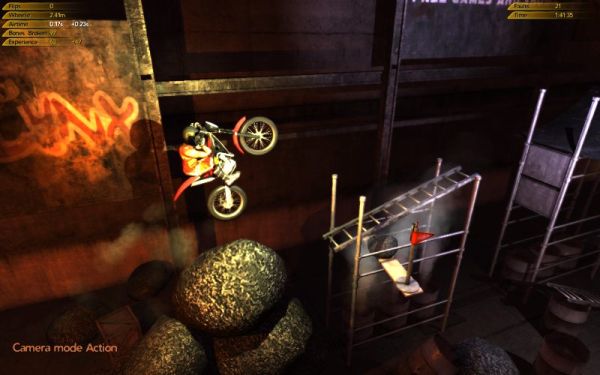 Time counts, but the number of faults (e.g. crashes) also affects your score, so you’ll really want to get as clear a run as possible. In a game where faults can easily run into double – hey, who’s kidding? Triple – figures, that’s not always easy. If you’re a perfectionist, this might not be the best game for you to get involved with. Goodbye, wasted hours.


In fact, Trials 2 makes you feel like a sadist and a masochist at the same time. I say sadist, because a lot of the pleasure is in watching your pitiful rider smashed, crunched and ground against every surface going – and the game cheerfully keeps a track of his fragile state and the number of broken bones. I say masochist, because Trials 2 can be an absolutely pitiless game. 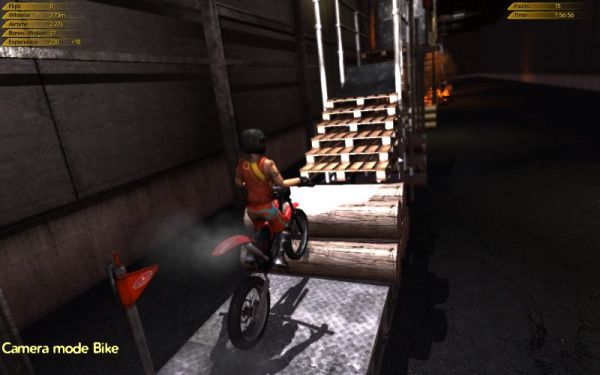 Despite a scattering of tutorial sessions at the beginning, it’s not long before the game gets mildly tricky, and not long after that before the level designers start to throw in some very cruel tricks indeed. Even given a generous scattering of checkpoints on each level, you will be frustrated. You will grind your teeth and swear. You will start giving your keyboard threatening looks. And then you’ll go back and do the same damn bit again and again and again until you get it right, or until the veins in your temples explode. Basically, whichever comes first.

There is help to be had from an unexpected source – your fellow players. Look at the leaderboard for the current course and you’ll see a Play button next to every name. One click on it and you’ll almost instantly see a replay of their run, complete with an overlay of the buttons being pressed. This might not be a shortcut to the god-like skills shown by the lading Trials 2 riders, but you’re guaranteed to pick up a few hints as to how to crack any brick walls you find yourself banging your head against. 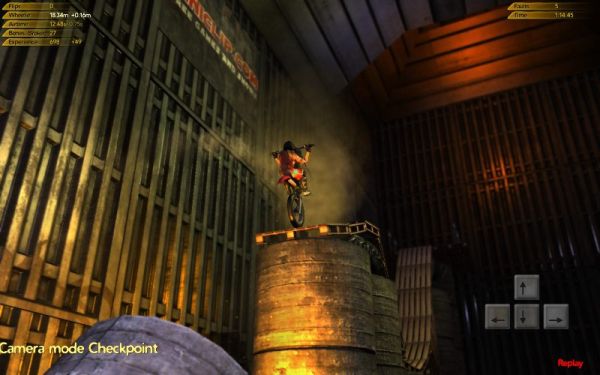 Now, at this point you might be expecting me to excuse the common fault of the low-budget indie game – low budget, indie presentation. However, the team at RedLynx has a commercial background and this is actually a surprisingly slick game. The action may be 2D, but the game is rendered using a proper 3D engine. To see it at its best, just check out the replays and watch your best moves (and worst disasters) from a variety of cool camera angles.


While the graphics stick close to an industrial theme and the courses are made up of a fairly limited selection of building blocks, the modelling and animation of the bike and rider are excellent and the game makes effective use of bump-mapped textures and sparse lighting. The audio effects might be slightly muted – we’d like to hear a few more gruesome snaps and squeals of pain when your rider bites the dust once again – but the OTT rock soundtrack fits the overall style perfectly. It might not do a whole lot, but what Trials 2 does do, it does well. 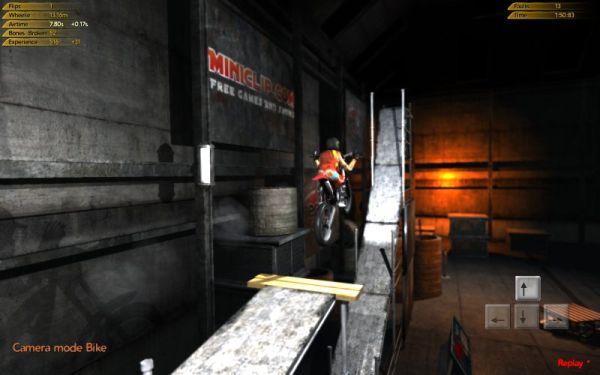 Were this a full priced game I’m not sure I’d be collaring everyone I know to try Trials 2, but given the sub-£10 download price it’s an absolute steal. It’s the sort of game that flourishes when you can get your mate’s playing it, and while that makes the lack of a Friends list and corresponding filtered leaderboard disappointing, you can at least get together in a team and combine your efforts. It’s not a game for the easily stressed, the easily downhearted or the impatient, and you can’t help wishing for a slightly more generous learning curve, but once you’ve been bitten by the Trials 2 bug, you’ll find it very hard to leave the thing alone.


A simple but hideously effective time waster, Trials 2 can be maddeningly frustrating, but the engaging gameplay and smart online integration make it every bit as addictive.