With the ever-increasing popularity of digital photography and the near-universal ownership of powerful personal computers, it’s no surprise that a lot of people will at some point try their hand at digital image editing, even if it’s only cropping and re-sizing an image. Most digital cameras come with some sort of simple editing software, capable of adjusting colour, brightness and image size, and even making basic alterations to a photograph, such as correcting flash red-eye. 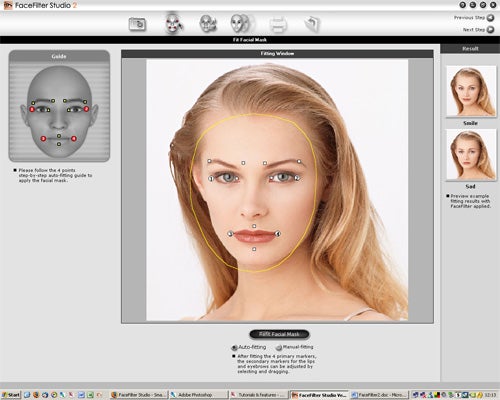 Of course at the other end of the scale you have full-scale digital image editing suites, most famously Adobe Photoshop, used all over the world by professional photographers and designers to alter and even create from scratch amazing digital artwork. Almost every photograph you will see in any popular magazine or advertising poster will have been re-touched in some way. Indeed there have been several controversial cases of news photographs that have been altered to make a political point or to cast a celebrity in a more flattering – or unflattering – light. 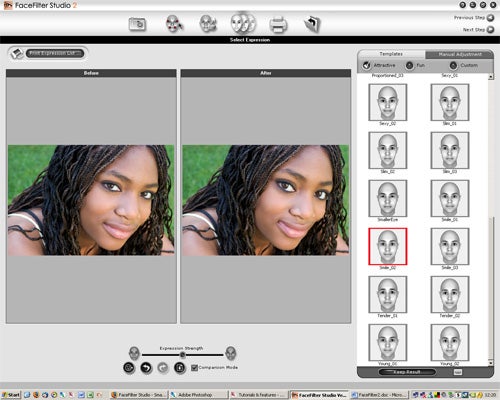 Programs like Adobe Photoshop are very complex, and it requires a lot of study and practice to become proficient in their use. They can also be very expensive. Photoshop CS2 costs well over £500, and even the latest version of the popular Corel Paint Shop Pro costs over £50. For the home user who has neither the time nor the money to spend on such programs, Reallusion FaceFilter Studio 2.0 offers a much cheaper and quicker way to edit portrait photographs, providing a simple step-by-step method for adjusting colour, brightness, skin tone and even facial expressions, using face detection and some simple image morphing routines. The program has a recommended retail price of £29.99, but is available on Amazon for around £25. 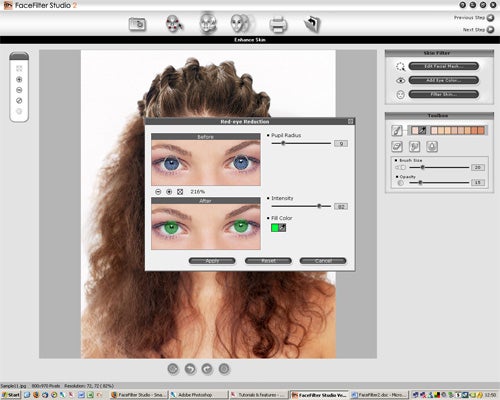 Naturally for that kind of money you can’t expect professional quality results, and the effects produced by FaceFilter are more useful for their novelty value than for any serious use. It offers about the same level of complexity as the basic editing programs supplied with digital cameras, such as ArcSoft PhotoSuite, sacrificing versatility for clarity and ease of use.

The operation of the program is divided into six easy-to-follow steps. First, you select a picture that you want to change. Due to the nature of the program it only really works on facial portraits, preferably close-cropped ones in which the subject is looking straight at the camera. It also helps if your subject doesn’t have a strong facial expression. In this section there is a red-eye removal tool which works reasonably well, but to be honest it’s no better than the system now built into many digital cameras. There are also both automatic and manual colour balance corrections at this stage. 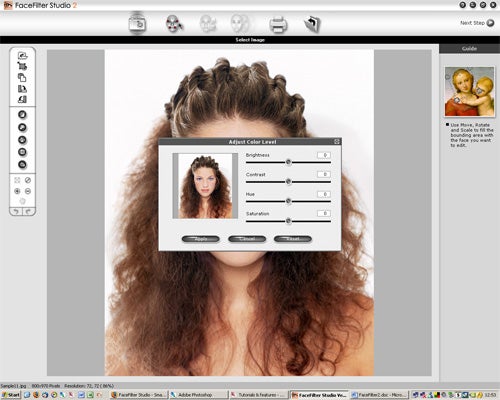 You can select the face area of the image manually, or have the program attempt to do it automatically. It does this by looking for the familiar pattern of features that make up a human face, and it works about as well and as reliably as the face detection systems found in many recent digital cameras, in other words don’t bother trying if your subject is wearing sunglasses, or is turned at and angle to the camera, or has part of their face covered. 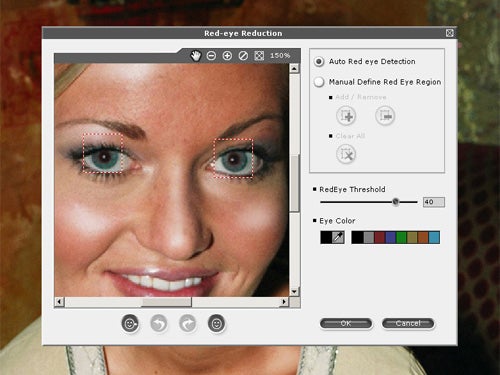 The program attempts to detect the edges of the face area, and places twelve anchor points on the image, which can be manually moved into position to mark the edges of the eyes, eyebrows and mouth. These are the points that will be moved to create the expression morphs. 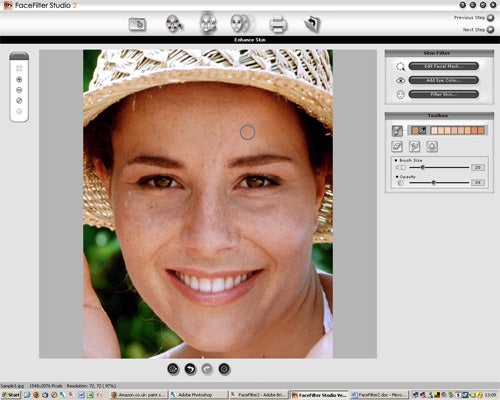 The next step is “Skin enhancement”, which is unfortunately the weakest part of the program. It consists only of a crude MSPaint-like colour brush and a blur tool, and has a very limited range of skin tones. Anyone with darker skin than a lightly tanned European will be very disappointed. I tried it with a portrait of a black model, and it made her skin look a very unflattering shade of dark orange. There is a section labelled “Filter skin”, but this is also fairly unsophisticated. It has options to smooth away wrinkles and other blemishes using a masked blurring technique, as well as contrast reduction to get rid of any shiny patches. Again the presets for the skin tone adjustment are limited to Caucasian skin colours only, which seems like a bit of an oversight to say the least. There is no clone brush to remove skin blemishes or wrinkles, and the option to re-colour eyes is very crude, simply superimposing a coloured circle over the pupil, which most of the time will also overlap the upper eyelid, with no way to edit it.

The clever part of the program is the face morphing section. The facial key points that were detected or manually selected earlier are used to alter or create facial expressions, by morphing areas of the face. There are about 90 muscles in the human face, at least 30 of which are used to create our facial expressions, so naturally just moving 12 points around doesn’t produce particularly realistic results. There is a library of pre-set expressions, divided into “Attractive” and “Fun”, although to be honest some of the supposedly attractive ones were pretty hilarious, especially the “Sexy” ones. There is an option to view these presets as preview thumbnails of your original image, but on a 17-in monitor I found them too small to be useful. Trying the option to print out a preview comparison sheet caused the program to crash. 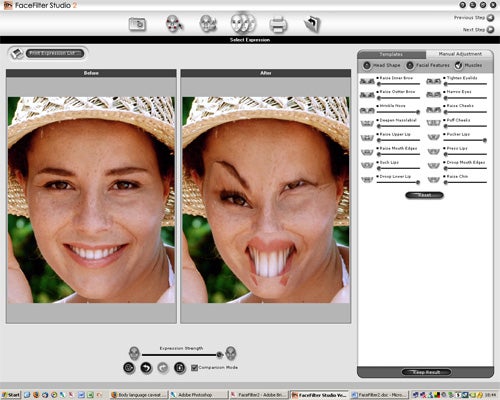 There is also the option to manually move facial features around to create your own expressions, and to be fair it does present a large list of adjustable parameters, allowing you to fine-tune the facial expressions of your portrait subjects. The trouble is it will only really work if your subject has a very neutral expression to start with, and anything other than the most subtle changes end up looking like caricatures. Our visual cortex is very good at face recognition, and anything that strays too far from the normal range of facial proportions quickly looks bizarre and unnatural. 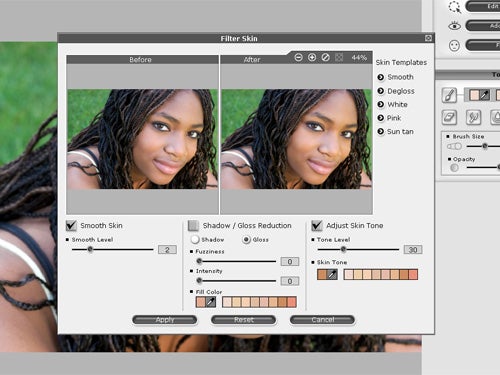 The final section of the program allows you to print or export your edited image, and is totally straightforward as you might expect. As far as it goes, FaceFilter Studio 2.0 is a lot of fun, and does offer some basic and very easy-to-use editing for portrait photos. The effects can look a bit crude and are awful if overdone, but applied with restraint it is possible to get some decent results out of it with the right type of picture.

Reallusion FaceFilter Studio 2.0 is a lot of fun and very easy to use, although it is very limited. If you want a serious image editing program, you can get the superb Ulead PhotoImpact 12 for about the same price, or Corel Paint Shop Pro 11 for not much more, but if you just want a quick way to tweak your portrait snaps, then this is just the ticket.