The Razer Nommo Pro is an excellent sound system that will improve any gaming set-up, whether at a desk or in a lounge. It offers wonderfully balanced audio and a suitably wide soundstage for immersive movie watching as well. But with pricing starting at £500, it is a very expensive luxury.

The Razer Nommo Pro is the top-of-the-line 2.1 gaming sound system from the iconic laptop and PC peripherals juggernaut behind the Blade 15.

Featuring Dolby Virtual Surround Sound and THQ Certification, plus four input options, the Nommo Pro offers plenty to like on paper. If money is no object the Nommo Pro is a great addition to any serious gaming set-up, whether on PC or console.

But with pricing starting at £500 and the subwoofer and satellite speakers taking up an inordinate amount of space, you should make sure you have a suitable play area to house the system before handing over your hard-earned cash.

The Razer Nommo Pro is not a subtle bit of kit. In the box you’ll find a cabled control dial and giant down-firing cylindrical subwoofer that sits around a foot and a half high, plus two satellite speakers, which on their own will take up most of a regular desk’s space.

The design isn’t the prettiest I’ve seen. The Nommo Pro will draw the eye of visitors, even if you turn the satellite speakers’ RGB lighting off – which I thoroughly recommend most people do using the desktop/mobile Razer Synapse app the moment the speakers are set up. 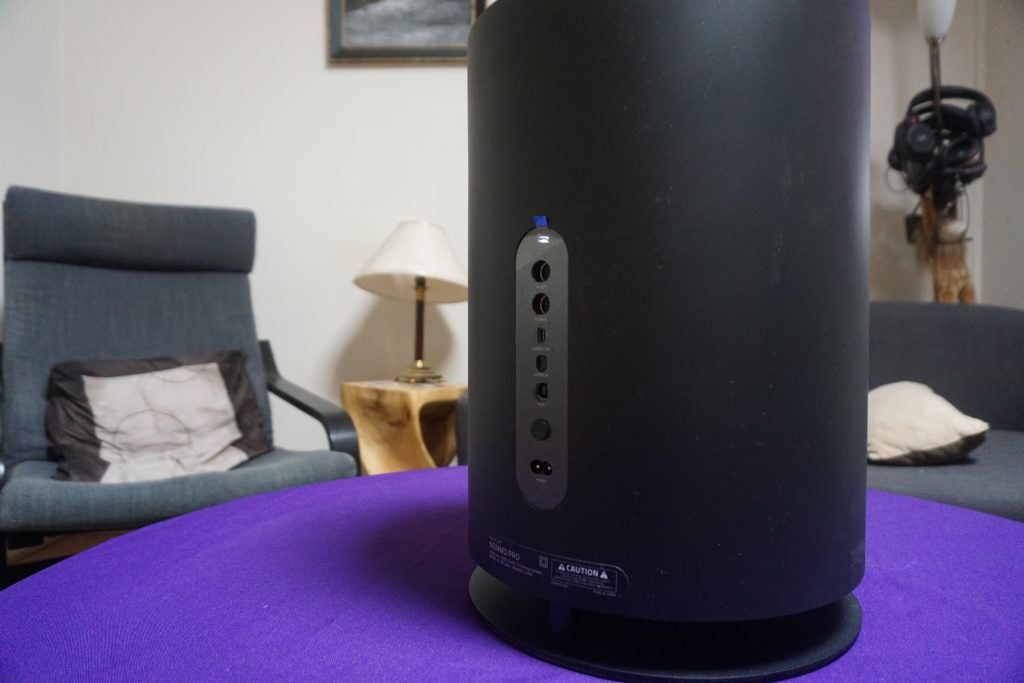 The set-up process is also a little laborious due to the Nommo Pro’s woefully short cables. Setting it up in my lounge I had to reroute most of my TV and console’s wiring and adjust my gaming PC’s placement to create a direct channel for the Nommo Pro.

Once set up, the system ticks all the right boxes for functionality. The Nommo Pro supports four different inputs: USB, optical, Bluetooth 4.2 and 3.5mm. You can switch sources quickly and easily using a button on the dial control, which can also be used to adjust the volume. This made it quick and easy for me to switch between USB for gaming to optical for my TV and Bluetooth when streaming from my phone. 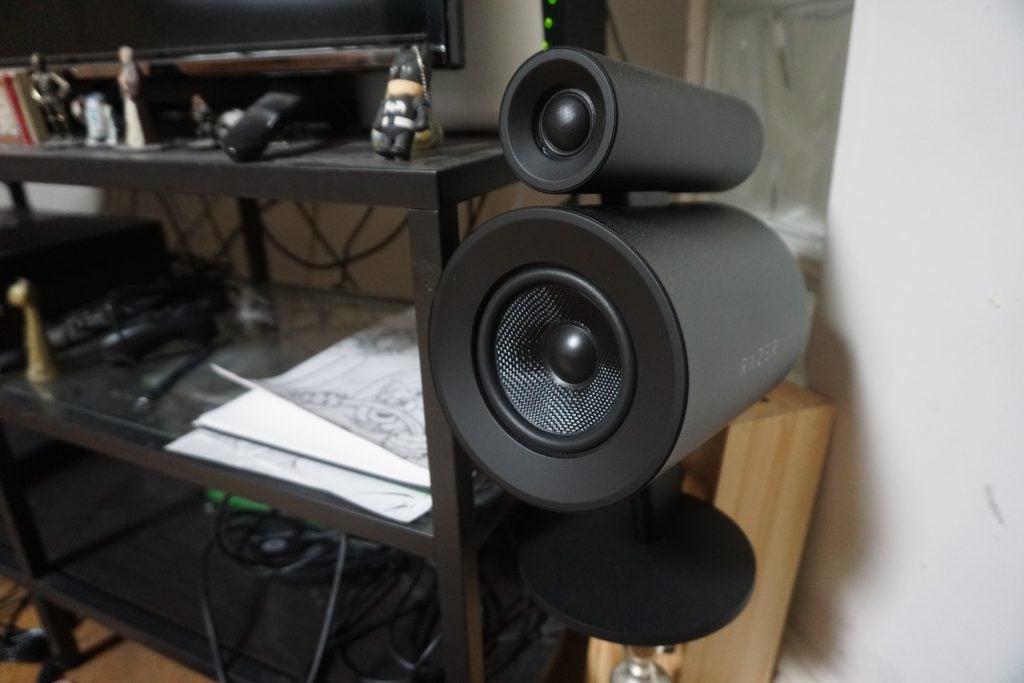 I’m also a big fan of the fact that Razer’s rubberised the bottom of the subwoofer and speakers, which makes them stick in place even when knocked – a boon for more animated competitive gamers who occasionally hulk-out over an “unfair” death.

The Razer Synapse (desktop) and Nommo Pro (iOS/Android) apps are also both excellent. The app makes it easy to tweak the speakers’ EQ and RGB lighting pattern, switch between audio presets (gaming, movie, music etc) and turn on sound modes such as Dolby Surround Sound.

The mobile app has a wonderfully intuitive UI and easy-to-access volume slider, which saves you having to get up if you are using the Nommo Pro in a lounge environment.

Despite coming from a gaming, rather than an audio, brand, the Nommo Pro manages to deliver pretty impressive sound quality, particularly when gaming.

For starters, it’s loud – really loud – to the point that, when I accidentally turned it all the way up while watching a horror movie (USB connection to PC), I had my neighbours knocking on the door thinking someone was being murdered. Make no mistake, the Nommo Pro is proper home entertainment system-level loud. 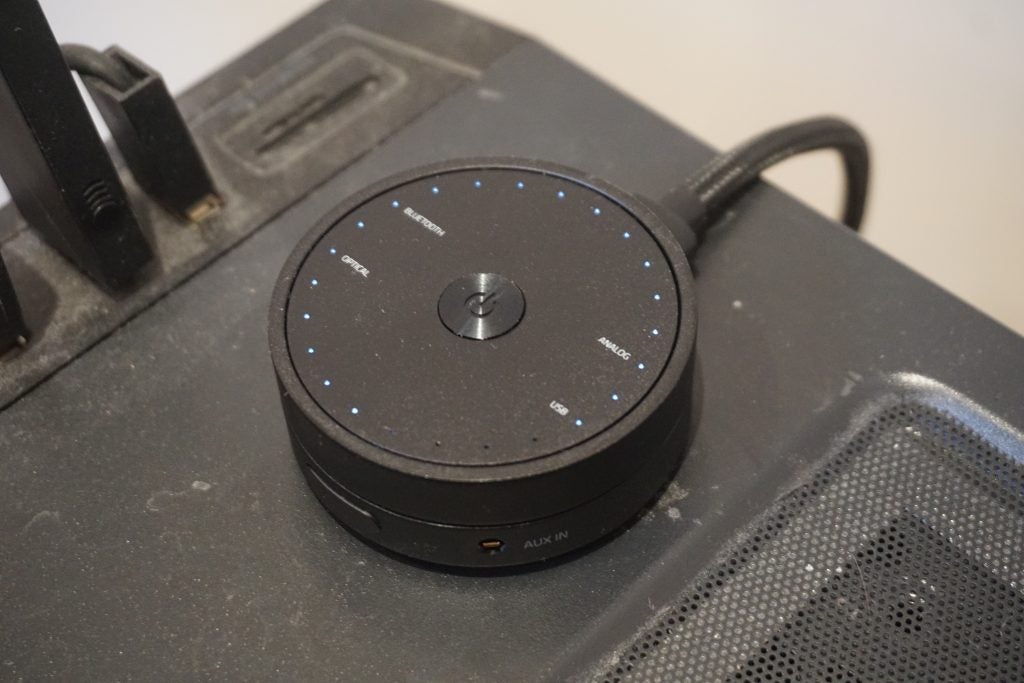 But what impressed me is how well the subwoofer and satellite speakers – which feature three-inch, Dupont Kevlar-coated paper drivers and separate silk-dome tweeters on top – work together to create a balanced, immersive sound.

Unlike many fledgling brands trying to break into audio, Razer’s ensured the low end is suitably controlled. When it kicks in, the down-firing subwoofer gives audio a pleasing rumble but never drowns out any of the other frequencies.

I could constantly hear player voices over mid-heavy gun fire and rumbling vehicle engines when playing shooters online. The same was true of movie soundtracks. My only minor quibble is that the low end could be a little tighter and punchier. This was particularly noticeable when playing a cyberpunk game, which had a fairly aggressive bassline as a soundtrack.

The set-up also delivers a wonderfully wide soundstage. This, plus its Dolby Surround Sound support, means the Nommo Pro offers a clear sense of direction when gaming. Playing survival horror titles I could hear the direction of incoming footsteps, adding a whole new level of terror to the experience. Even without the Dolby Surround mode switched on, the system offers a great stereo image and, in general, is more than good enough for gaming and watching films.

The mids and highs are also well represented, though on occasion lack a little precision, particularly when listening to music or streaming via Bluetooth. This is forgivable given the Nommo Pro’s gaming focus. 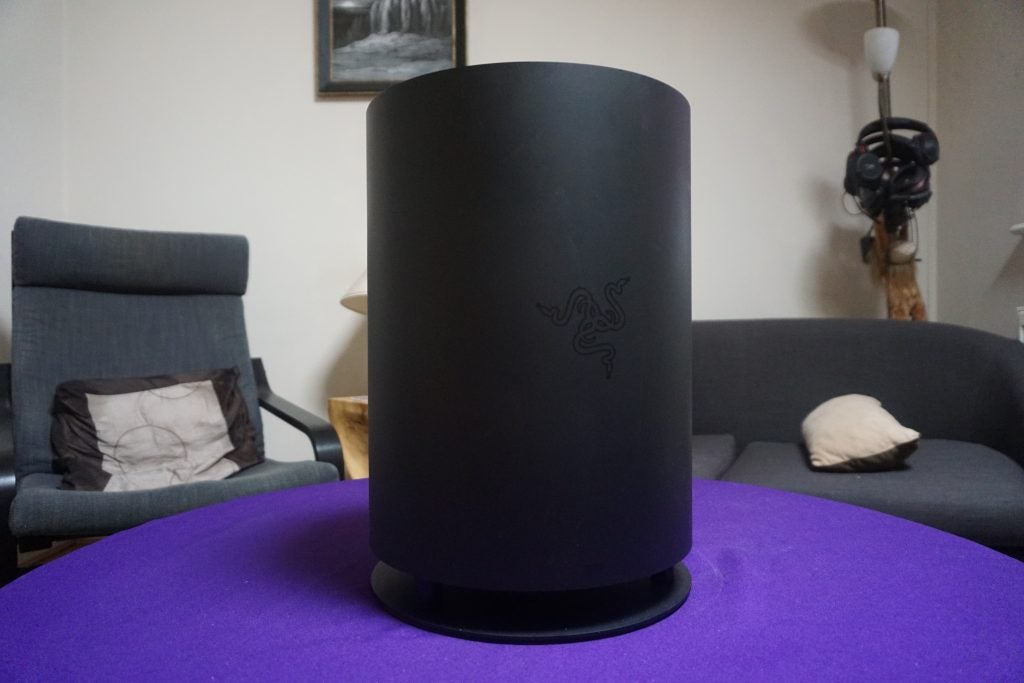 Should I buy the Razer Nommo Pro?

There’s no getting round the fact that £500 is a lot to spend on a gaming speaker set-up. But if you have the cash, the Razer Nommo Pro is well worth it.

Looks aside, the system offers a balanced, immersive sound that’ll improve any gaming session. If you’re after an all-in-one audio solution for your TV, while I wouldn’t describe it as true audiophile effort, volumes and sound quality are more than good enough for basic music streaming and movie sessions, making it an ideal fit for lounge set-ups as well as pure PC gaming.