As any soldier will tell you, a reliable weapon is paramount to a successful campaign. The same is true in the world of virtual warfare, where every millisecond and pixel matters – a world where fast and accurate targeting can be the difference between life and death. I realised just how much difference a high resolution gaming mouse could make when I reviewed the Logitech MX518 a little while ago, and now I have what’s widely considered to be the Daddy of gaming mice sitting on my mat – the Razer Diamondback. 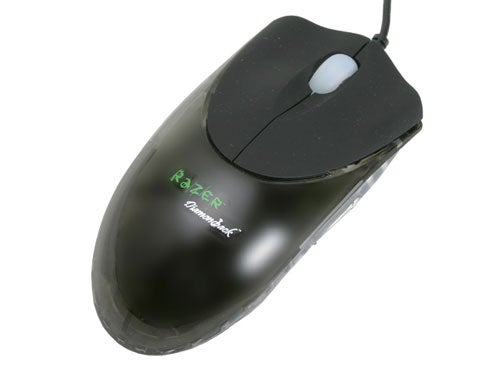 Actually the Razer Diamondback has been around for a while, and it was the first 1,600dpi mouse to hit the streets, but after I reviewed the Logitech and Benny looked at the Saitek PC Gaming Mouse, we felt that we had to also assess the Razer. In fact it’s clear that this mouse has been available for a while, since there are quotes from previous reviews plastered on the box. However, whoever it was that chose those quotes really should consider a career outside of marketing. Why? Well, this is what Tom’s Hardware had to say according to the Razer box – “… The mouse’s accuracy is really diabolical…”. Hardly what I’d consider to be a choice quote to sell your product, but each to his own.


Anyway, amusingly inappropriate quotes aside, let’s take a look at the Diamondback. The version I have in front of me is the limited edition Plasma version, which has a very cool blue light that illuminates the scroll wheel. It has to be said that the Diamondback looks great, even better than the Logitech MX518, which I quite frankly adore. The casing has a smoked black finish, but it’s still translucent enough to see the workings and, of course, the blue light inside.

The top of the mouse is dominated by two large rubber buttons which have a very responsive click to them. The scroll wheel is very tactile and easy to use even in the thick of battle. On both the left and right side are two buttons, bringing the total mouse buttons up to seven. The side button pairs are accessed by a rocker switch, so pressing the rocker at each end presses a separate button. 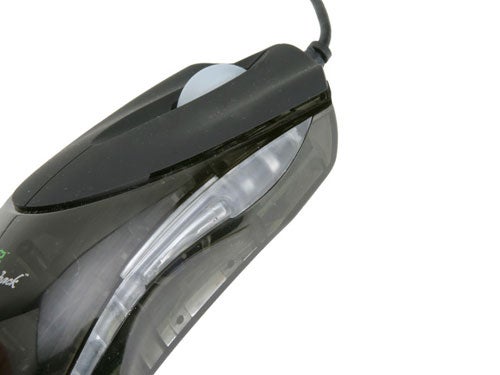 All the buttons on the mouse are programmable via the Razer configuration utility. By default the rear, left side button is used for “on the fly” sensitivity adjustment. Much like the Logitech MX518, you can alter the sensitivity of the Diamondback whenever you choose. Pressing and holding button four (the rear left side button) brings up a graphical indication of the mouse sensitivity, then rotating the scroll wheel will either raise or lower the sensitivity. Although in theory this is a great idea, in practice it’s a little more complicated. Trying to change your sensitivity while playing a game can be tricky, since the graphic tends to flicker constantly while you try to set the mouse speed. That said, it’s still a big improvement over the single button 800/1600dpi setting on the Saitek, but I still prefer the plus/minus sensitivity buttons on the Logitech.


In use, the Razer Diamondback is definitely fast, while also being light enough to whip from side to side quickly. But my main criticism is somewhat odd, in fact it’s pretty much the opposite to the complaint that I have about most mice. The problem I have with a lot of mice is that they’re too big – when you’ve got small hands, hefting around a large mouse isn’t that easy. Also, when I’m gaming I rest the heel of my palm on the desk and move the mouse with my thumb and ring finger, for fast and accurate movement, but I can’t do this with a large mouse. It therefore came as quite a surprise to me that the Diamondback is actually too small for me to comfortably use.

To be fair, the Diamondback is a good height, but it’s just too narrow, especially since its waist is tapered exactly where I need to grip it. If I place my thumb and ring finger over the side buttons it’s not too bad, but I constantly end up clicking the buttons using it this way. 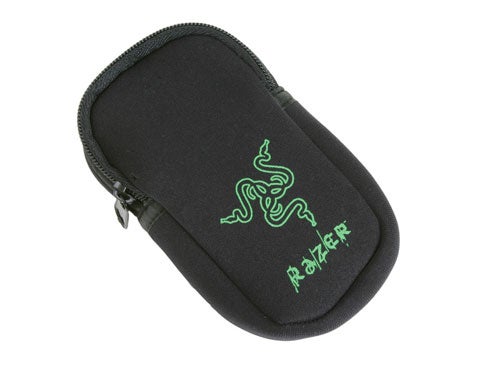 Razer obviously expects you to take your Diamondback with you to LAN parties and gaming tournaments as you also get a carrying pouch for safely transporting your mouse around with you.


The Diamondback Plasma is a limited edition and as such you’re going to have to pay a bit more for it. CCL who supplied us with the mouse is charging £34.99, while the non limited edition Chameleon red version only costs £29.99. As far as I can tell, both mice are the same, so it depends if you prefer blue over red and whether you’re willing to pay extra for it. It’s also worth remembering that the Logitech MX518 is similarly priced at £33.99, and that’s where my money would go.


The Razer Diamondback is definitely a high-class product, but it’s just not one that gels too well with my style of usage. The narrow waistline makes it difficult for me to hold, and results in an aching hand after prolonged use. That said, others obviously find comfortable, and if you’re left handed you’ll appreciate not having to adapt to an obviously right-hand biased design.