What is the Razer Blade 15?

The Razer Blade 15 2018 is the latest entry into Razer’s flagship line of gaming notebooks. It targets the same space as the stellar Gigabyte Aero 15, aiming to offer buyers a thin and light gaming laptop that doesn’t skimp on specs.

The redesigned device has all the trimmings of a great mobile gaming station and feels like a significant step forward on Razer’s previous offering. Make no mistake: if portability is your primary concern then this is one of the best gaming notebooks currently available.

A number of small niggling flaws, coupled with a hefty price tag, stop it from scoring top marks, however.

Also of note, Razer has revealed a new dual-storage model. This laptop has both an SSD and traditional hard drive, yet actually comes in cheaper than the standard options at £1480. That’s because Razer has ditched the ultra-smooth 144Hz dispaly and replaced the vapor cooling chamber with a unibody fan exhaust. All of the other specs for the baseline model remain the same though, so you don’t need to worry about a CPU or GPU downgrade.

The new Razer Blade 15 model will launch in the UK sometime in November. We’ll make sure to get our hands on one for a review, so keep your eyes on Trusted if you fancy the cheapest possible Razer Blade 15.

The Razer Blade 15 is a very different beast to its predecessor. It has the same iconic black metal chassis and glowing green logo on its lid, but open it up and you’ll see that Razer has taken a page out of Dell and Gigabyte’s design playbooks, radically reducing the size of the screen bezel.

The end result is a laptop that looks like the mongrel child of a Dell XPS 15 and 2017 Razer Blade, which to me, is no bad thing.

Even though the Aero 15 sports a similar near-bezel less design, the Razer’s black metal body feels sturdier and generally more premium. I’m also impressed at how thin and light the laptop is, when you consider its specs. The Blade 15 weighs in at just over 2kg and is a meagre 16.7mm thick, making it compact enough to fit in most regular satchels.

One nice touch is that, unlike the Aero 15, Razer’s loaded the webcam into the top of the screen border, rather than the bottom. The top edge is chunkier as a result, but the placement means the webcam is actually usable, and won’t treat people to an up nose shot when streaming on Twitch.

Connectivity is solid, too. Along the Blade 15’s right edge you’ll find a Thunderbolt (Type-C), USB 3 and HDMI mini-DisplayPort. Backing this up are a pair of USB 3 Type-A ports, a 3.5mm headphone jack and a proprietary power connector on the left.

Personally, I’m not a fan of proprietary cables and would have preferred it if Razer had enlisted a basic USB-C connector for charging. But, apparently, the move was unavoidable since USB-C’s maximum power draw isn’t high enough to meet the Blade 15’s needs. 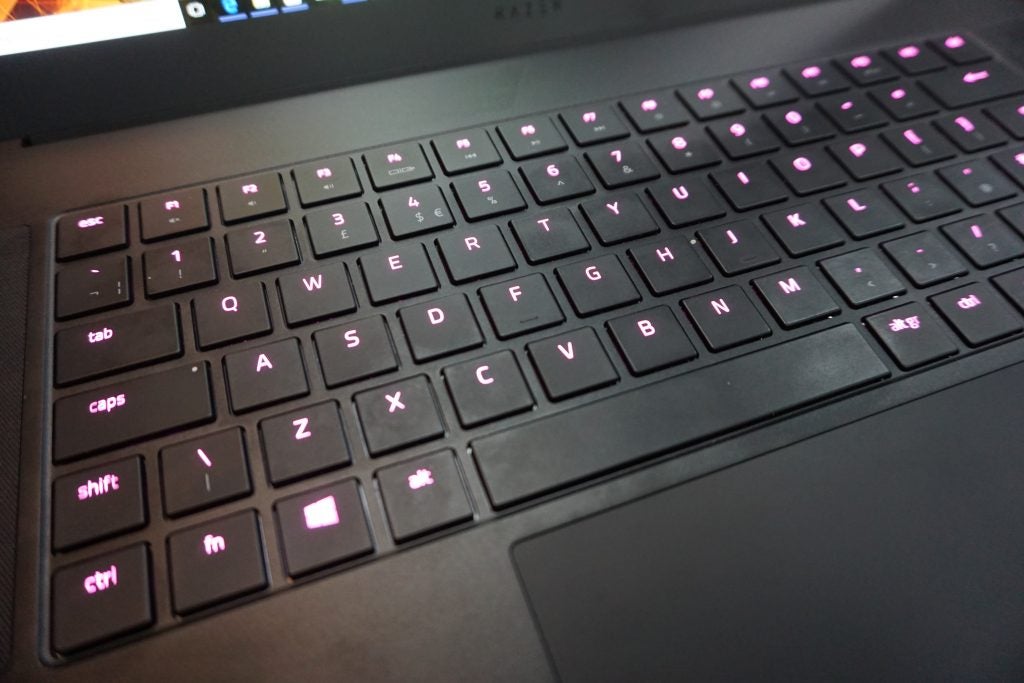 Other than a new screen, then, things feel fairly familiar once you pop the hood. The laptop has a similar, RGB anti-ghosting keyboard to its predecessor. It isn’t quite as reactive as that of the XPS 15 2-in-1, which uses custom maglev tech to create a faux-mechanical experience, but it’s still more than good enough for gaming and everyday typing.

The metal body offers next to no flex, even with heavy typing – a minor issue on the Aero 15 – and the keys have a pleasing click action so you can be in little doubt that you’ve hit their actuation point.

A week with the Blade 15 the keyboard never once missed a keystroke, even during heated Destiny 2 matches, where I was bashing away with some gusto. The included Game mode is also super-handy in this instance. It manually shuts down common Windows shortcuts, to ensure they’re not accidentally activated mid-game.

Razer fans will appreciate the Chroma support, too. It means the RGB lighting can be set to sync with other Razer peripherals in the preinstalled Synapse app. 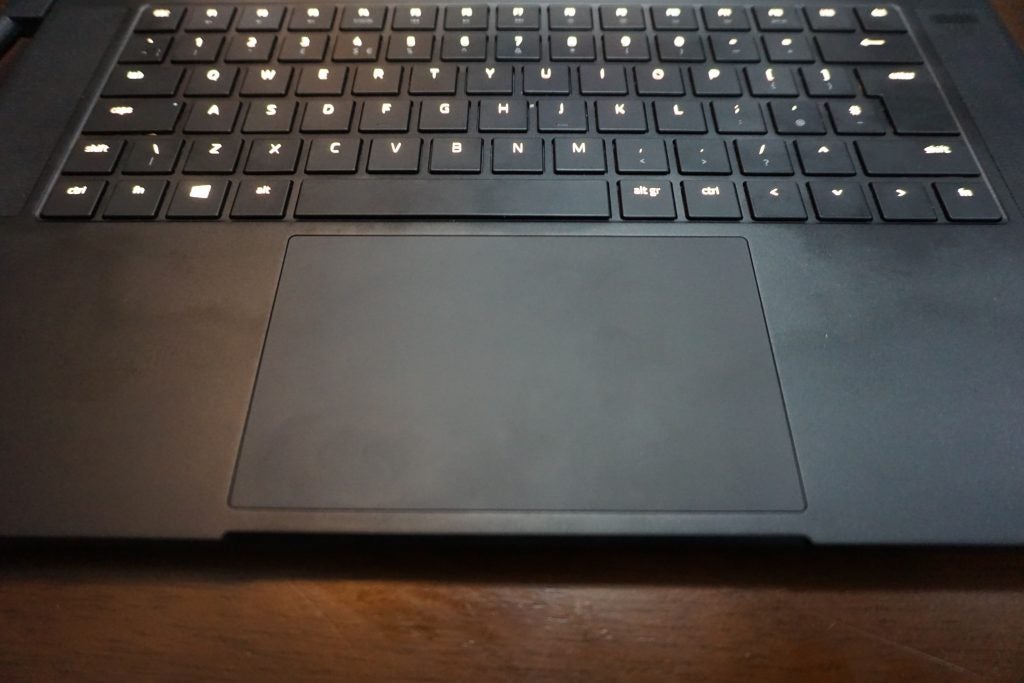 My only minor gripe with the keyboard is the absence of macro keys. Being fair to Razer, the Blade isn’t the only gaming device in this class to not feature macro keys; the Aero 15 doesn’t have them, either. Nevertheless, their absence will be an annoyance for serious PC gamers who are used to using dedicated gaming keyboards.

The trackpad has also received a spruce up. The glass touchpad has been enlarged and now features Microsoft Precision Touchpad support. On paper, this makes it a big step up on last year’s Blade, which featured a slightly squashed, unresponsive touchpad.

In real-world use, the touchpad was more than good enough for basic office work, but it still can’t quite match the MacBook Pro or XPS 15 for responsiveness. I also experienced some issues with multi-touch commands. Considering the Blade 15’s focus, however, it’s likely that most users will opt to use a gaming mouse much of the time – so this is far from a deal-breaker. 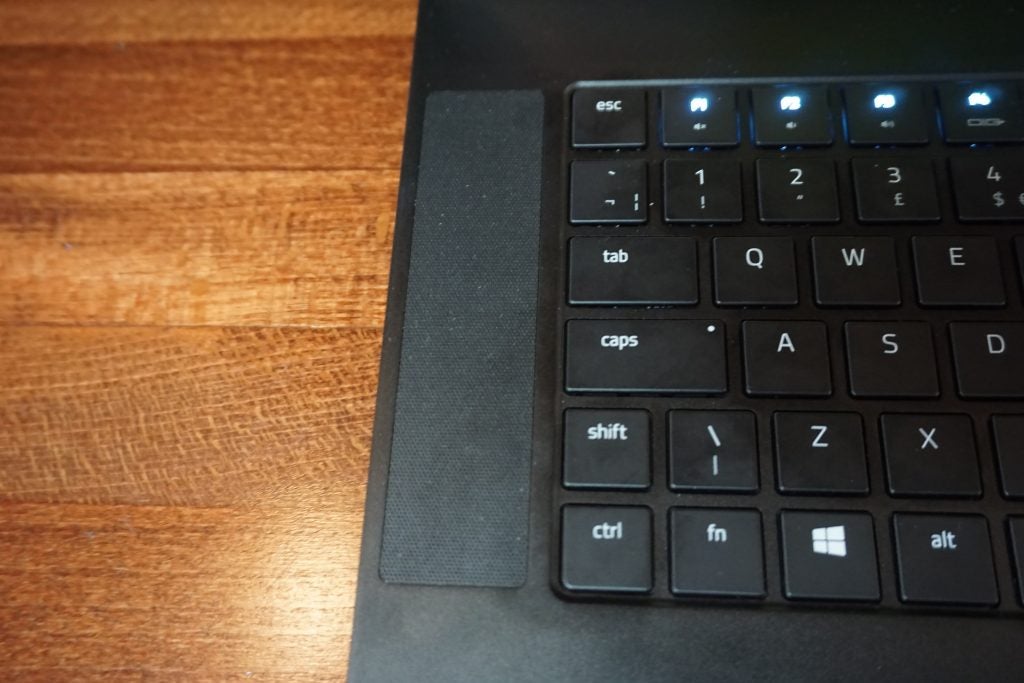 The Razer Blade 15 comes with a variety of different screen options. At the bottom end you’ll get a basic 15.6-inch 1080p Full HD, 60Hz panel. At the very top is a 4K, 60Hz option that’s been set up to display “100% of the Adobe RGB” colour gamut favoured by artists.

I tested the top-specced FHD option, which comes with an improved 144Hz refresh rate. The Razer is one of many gaming 144Hz gaming notebooks to arrive this year. The improved refresh is a boon for gamers, where response times are key, and made gaming on the Blade 15 an absolute joy. Games generally feel smoother and are significantly more responsive.

Cracking out my trusty colorimeter, the screen performed OK. The 0.3-nit black level means that blacks are suitably dark. The 326.6-nit white level isn’t the brightest I’ve seen on a laptop, but adds up to a usable 963:1 contrast ratio. The 6730K colour temperature is also only a smidgen off the 6500K ideal.

The only area in which the screen struggled was colour gamut coverage. The screen I tested covered 92.6% of the sRGB space, which is more than good enough for regular use and gaming. But it covered only 65.1% of the Adobe RGB and 67.9% of DCI-P3 colour gamuts favoured by creatives.

Razer doesn’t make any claims about Adobe RGB coverage on this version of the Blade 15. The company has also been clear that the 1080p, 144Hz model is designed for gamers, not creatives – so the figures aren’t surprising.

Hopefully, the 4K model being marketed at artists, photographers and gamers will prove itself to offer better colour gamut coverage when we get it in for review later this year. 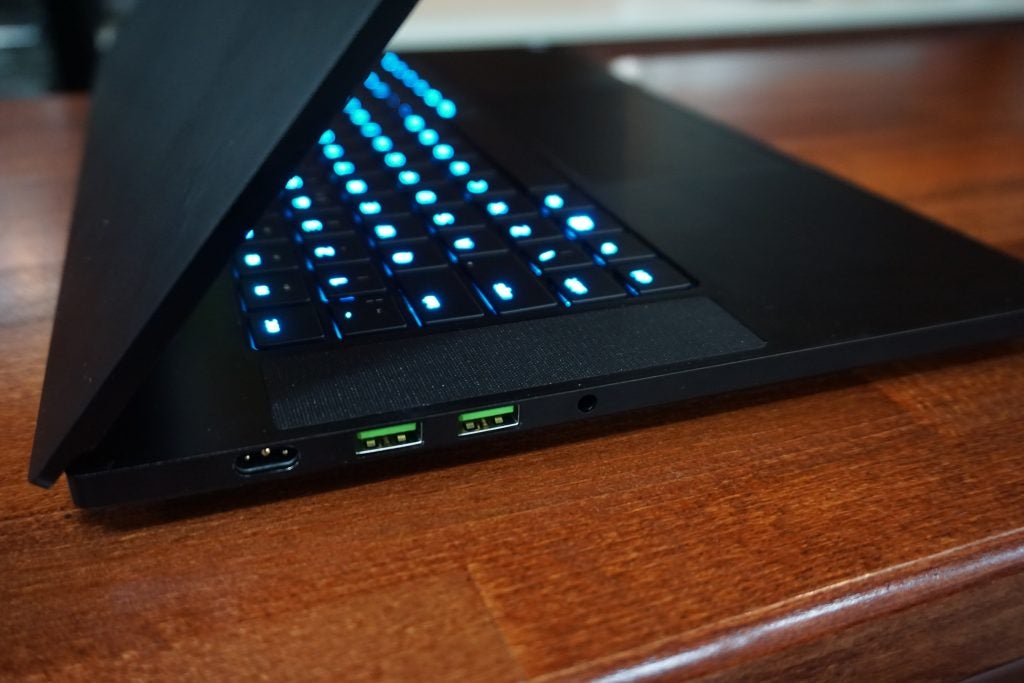 The screen isn’t the only part of the Razer Blade you can customise. The brand is currently offering the laptop in a variety of specifications, each of which will offer radically different performance. You can see the UK options in the table below.

The GTX 1070 configuration I tested was more than good enough for 1080p gaming. The laptop managed to play triple-A games, such as Final Fantasy 16, Rise of the Tomb Raider, Destiny 2, Far Cry 5 and Vermintide 2 with their graphics maxed at over 60fps in 1080p.

You can see how the laptop performed running Rise of the Tomb Raider and Far Cry 5 benchmarks with their graphics maxed in the table below.

It also performed admirably during my synthetic benchmark tests. The scores were on a par with rival notebooks with the same, or similar configurations. You can see how its scores compare to the 1070 version of the Aero 15 in the table below.

My only concern regarding the laptop’s performance stems from its slightly loud cooling system. The Razer uses a vapour-chamber-based cooling design that features a pair of 44-blade fans on its underside. It works well enough for regular office work and basic web browsing, although the top side of the device does become a little warm to the touch with prolonged use.

It goes into overdrive when running intensive tasks, however. Running games for prolonged periods results in the laptop becoming noticeably hotter than competing gaming laptops, with its fans kicking into overdrive, creating a cacophony.

Thankfully, the issue wasn’t serious enough to cause any noticeable performance throttling or accidental shutdowns during testing.

The speaker system is also more than powerful enough to drown out the fan noise whilst gaming. It takes up more space than I’d like, but it makes up for this by delivering excellent audio quality and max volume levels.

Battery life is par for the course for a 15-inch gaming notebook with a dGPU. With regular use, the Razer Blade 15 generally lasted a full work day. Regular use entailed word processing, web browsing and basic photo editing throughout the day, plus a few games of PUBG over lunch.

Running our standard battery benchmark, which involves synthetically looping 10 minutes of web browsing and five minutes of video playback with the screen set to 150 nits using Powermark, the Blade 15 lasted an average of six hours. This score is a little better than most equivalently-specced gaming systems; the Aero 15 lasted only four and half hours running the same test. 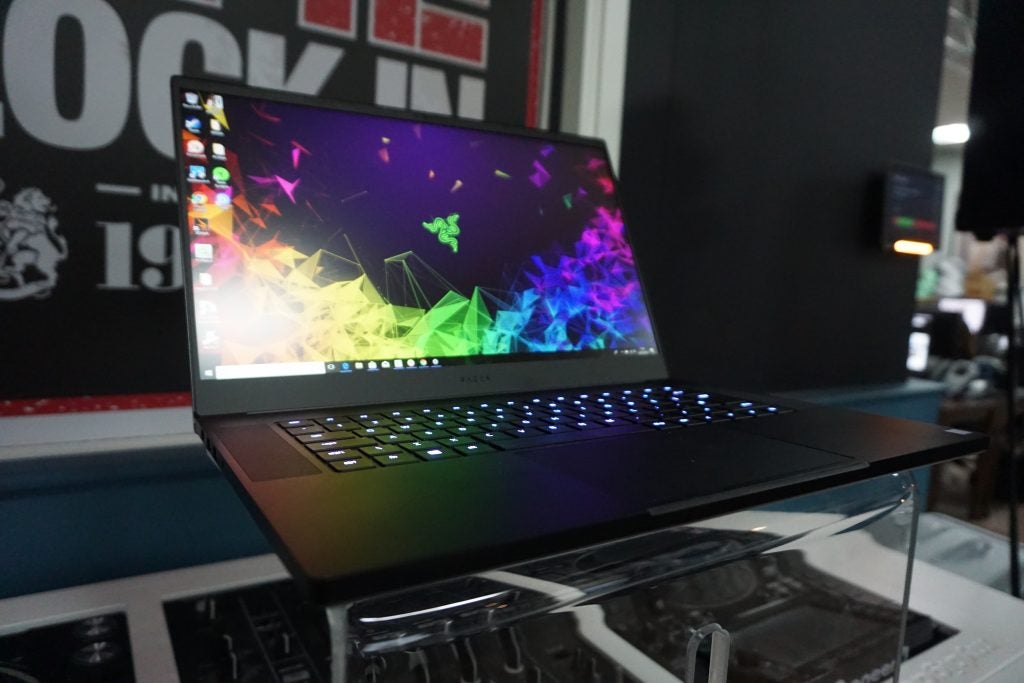 If you’re a hardcore gamer looking for a laptop that will play triple-A games, but won’t break your back carrying it around, then you’ll struggle to do better than the Razer Blade 15.

The Blade 15 is a huge step up on Razer’s past offering, featuring a near bezel-free design, larger trackpad and wealth of customisation options.

Be warned, though: while the 144Hz, 1080p screen is excellent for gamers, its colour gamut coverage isn’t good enough for serious creative work. Artists and photographers would do better to consider the 4K option, which according to Razer covers 100% of the Adobe RGB gamut.