Since the early days, people writing about games have been making comparisons with other works in other forms of media. First we called Infocom’s text adventures interactive fiction, then we called The Seventh Guest an interactive movie. Then we compared Metal Gear Solid to James Cameron’s blockbusters, Resident Evil to Romero’s zombie trilogy, and Grand Theft Auto to The Godfather and Scarface. Since then, we’ve talked about The Sims in relation to soap opera, and then about episodic games like the Sin or Half Life 2 efforts in relation to big US TV series like Lost or 24. You get the idea….


Well, Rayman Raving Rabbids is the gaming equivalent of a comedy sketch show.


It’s certainly not a platformer. Michel Ancel’s creation earned his following as the star of 32-bit 2D platformers and Dreamcast-era 3D adventures, and the strengths of the Rayman games were always in the gorgeous hand-drawn backgrounds, the superb character design, tight, well-constructed levels and Rayman himself – a cheeky, limbless hero with more personality than the usual cutesy animal crowd. Rayman Raving Rabbids runs with these strengths, but now they’re in the service of a series of arcade mini-games. The framing structure is minimal, and adventure elements are non-existent. Each level consists essentially of an arena, four mini-games and a final challenge. Complete three of the mini-games, tackle the challenge, and it’s on to the next level. Nothing could be simpler. 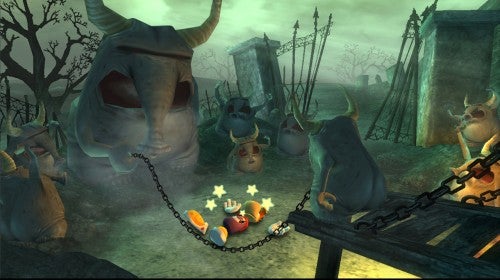 
In this case, however, you’d be wrong.


For one thing, the Wii version of Rayman Raving Rabbids is one of the first third-party titles to really get to grips with the Wii controllers. Each mini-game is built around particular movements of the remote and nunchucks, with some asking you to shake both rhythmically to mimic sprinting or pumping a handle, others asking you to aim with one and whack or shake with the other, while others still have you twirling the remote above your head, or tilting, turning and twisting it to move a character or solve a simple puzzle. 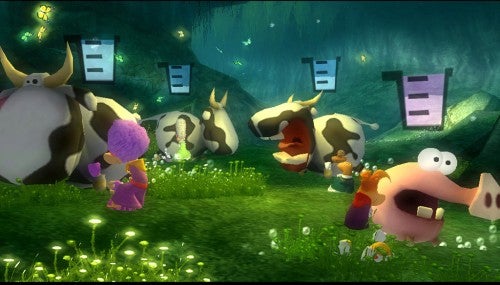 Unlike Super Monkey Ball: Banana Blitz, most of the movements are reasonably intuitive and what’s more, clear instructions before each event make it fairly obvious what needs to be done and when. This means that – when it works – RRR is one of the most straightforwardly enjoyable of the Wii launch titles, and a great advertisement for Nintendo’s vision. Practically anyone can play it and have fun.


What’s more, you can see that real effort and attention – even love – have been poured into the game’s design and concepts. Ancel’s signature hand-drawn style is as lovely as ever, and the Raving Rabbids of the title – a bunch of bug-eyed, furry marauders who have kidnapped Rayman and are forcing him through his many trials – are a triumphant bunch of crazed cartoon oddballs. They’re just about cute enough to keep the kiddies happy, but, like the stars of Gremlins or Tim Burton’s The Nightmare Before Christmas, they have a bizarre, twisted, slightly wicked side to them that makes them peculiarly engaging for adults too. 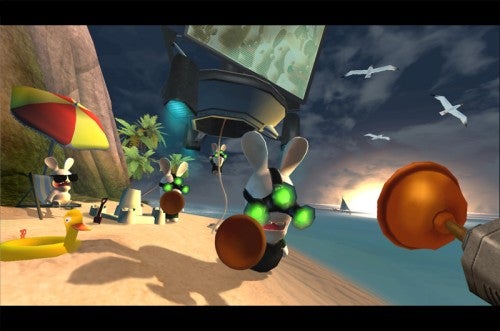 The clever thing is that the game takes this combination of the cute and the cruel and runs with it, with mini-games that have you slamming toilet doors for the easily embarrassed critters, tossing cattle like Olympic hammers, whacking bandaged bunnies in an attempt to build the biggest bump on the head, and ‘guiding’ a blind-folded bunny into as many dangerous looking objects as possible in an attempt to rack up points for pain. Other challenges see you squirting carrot juice into the diving masks of rabbits before they can reach and batter you, pumping your arms for all they’re worth in an attempt to send Super-Bunny soaring through the air, and attempting a spot of amateur rabbit dentistry. There’s even room to take a few penalties, engage in some winter sports or draw food for the plate of a half-starved lapin. Average mini-games these are not. 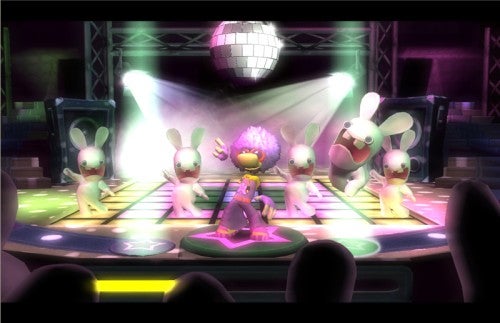 And this is where the sketch show comparison comes in. For a start, RRR is genuinely funny, pushing a rich vein of slightly sick humour while never going over the top to turn offensive. More to the point, it moves fast and packs in real imagination and variety. In a good sketch show, it doesn’t matter if you one sketch falls flat or you don’t like a character, because another one will be along in a minute and as long as the overall quality stays reasonably high, you’ll come away entertained. Well, the same applies here. A number of the events misfire, either due to poorly considered controls or a silly difficulty level, but the majority work brilliantly, and it’s rare that you get time to get bored, fed-up or frustrated. 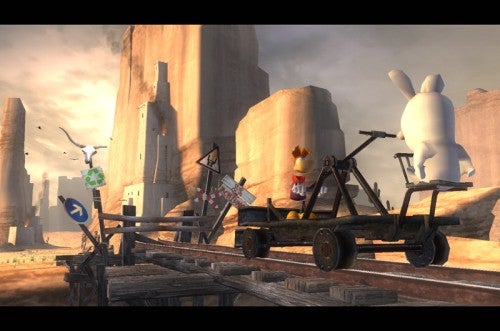 There are, of course, recurring themes. Each level contains a rhythm action game where carefully timed swings of the remote and nunchuck help a disco-dancing Rayman groove his way through a stream of rabbit invaders, and not since the glory days of Samba de Amigo have controllers been waved with such abandon. Meanwhile, the end of level challenges take only two forms: first, cool light-gun style adventures where plunger-wielding rabbits have to be shot before they shoot you and, second, warthog-racing levels where a combination of smooth steering and whip-cracking is the only sure-fire way to succeed. The shooting sections, in particular, are thoroughly enjoyable, with their fun movie-inspired looks and cute references to other games. You have to dig the stealth bunnies with their cool Splinter Cell goggles. 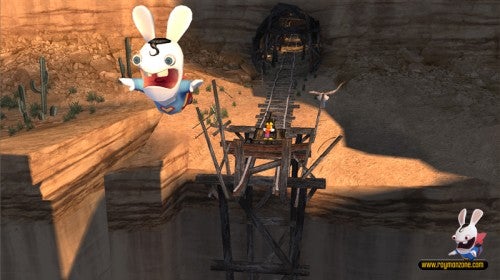 As with any TV sketch show some elements are not so successful. Some mini-games are let down by strange control issues, and there’s nothing more frustrating than being unable to complete your objective because the ‘shake’ needed to smack a rabbit seems to have stopped working, or because the aim seems slightly fudgy at the edge of the screen. Other games are overly demanding, expecting you to complete several complex tasks in order before a draconian time limit is reached. This doesn’t matter in most cases, as while completing all four challenges in a level means bonus rewards, you can proceed with just three finished. However, on certain levels you can get hit with two tricky buggers, meaning you’ll just have to persevere with one of them. 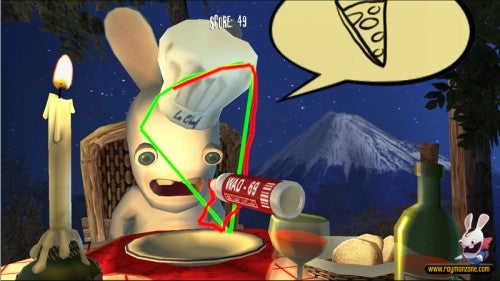 And if RRR shares another weakness with the likes of The Fast Show and Little Britain, it’s excessive repetition. After all the imagination shown in the early stages, it’s a shame to see so many events turn up in slightly more difficult guise later on, while it’s hard not to notice that more than a few events hinge on the same basic concepts and movements, no matter how well it’s hidden by the amusing presentation.


Still, the overall result is a collection of mini-games that are great just played alone, and even better if you play the game with friends or family. You can hand over the controls when one player gets stuck or tired, then sit, watch and chuckle from the wings. In fact, doing so is a lot more fun than playing the score mode designed for multi-player action. It’s sad to find this so rudimentary, with only a few games that allow simultaneous multi-player action, and sadder still to find that all games need to be unlocked in the main story mode before they can be played with additional players. It would have been nice to see leagues, tournaments or even a basic board game structure, but instead we just get mini-games sorted by type in some nicely-designed selection screens. Had RRR got this right, it might have added both to its longevity, and to the final score at the end of this review. 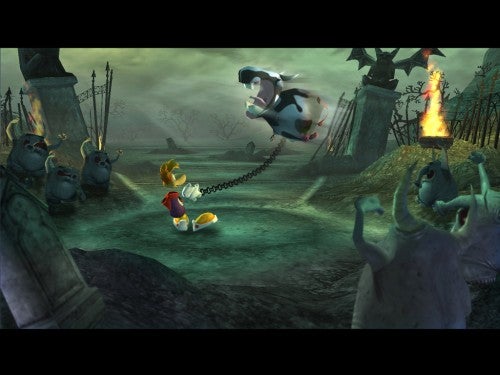 Despite this shortcoming, RRR remains another good reason to – ahem – have a Wii. In fact, if you have Wii Sports and Zelda, this would easily be my choice for a third game for the system until the next wave of titles comes along. It’s cool, it’s imaginative and it’s funny, and while I doubt you’ll still be playing it in six months time, you’ll certainly get more than your money’s worth of laughs.


It may be just a collection of mini-games, but most of the mini-games are great. Multiplayer options are flawed, but fine graphics, great use of the Wii controllers and sheer, twisted personality make the single-player mode a real treat.