If only this, not Resistance: Fall of Man, had been Insomniac’s PS3 launch title, Sony might have had a better year.


Where Resistance instantly felt like a flawed effort to establish a new franchise, Tools of Destruction feels like a confident step forward with an old one. Where Resistance seemed to have few ideas beyond rifling Halo, Gears of War and Call of Duty for inspiration, Tools of Destruction is practically buzzing with invention. And where Resistance failed to demonstrate that the PS3 had any visual clout whatsoever, Tools of Destruction is a dazzling demonstration of what Sony’s machine can do when pushed. It’s Ratchet and Clank turned up to the max, with the much-loved R&C art style given a new Pixar-like sheen and splashed out on a much larger canvas. Apologies to Mario, but if you want the most dazzling platform game on any system, this is it. 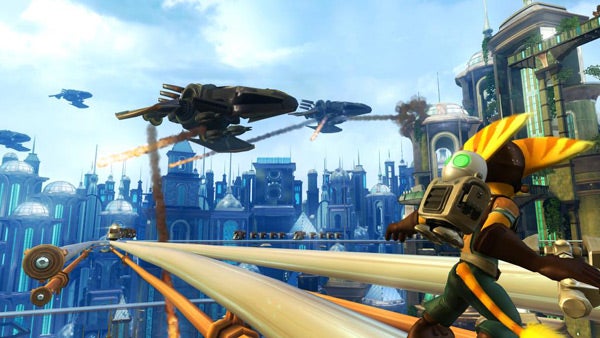 The original Ratchet and Clank took the engine Naughty Dog had developed for the first Jak and Daxter and used it to create a stunning sci-fi cartoon universe of exotic planets and gleaming astro-cities. The furry Lomax and his dry-witted robot chum rapidly became one of the finest platform series developed outside of Nintendo. The duo’s finest hour – Ratchet and Clank 2 – was one of the visual high points on the good old PS2. Yet the very first level of Tools of Destruction instantly proves how far ahead Sony’s – and Insomniacs – new technology is, thanks to an awe-inspiring race along the parapets and grinding rails of a gorgeous sci-fi metropolis as the whole thing literally falls apart around you. Overloaded with detail that you might not even see if you’re actually playing it, it’s an incredible beginning, but Insomniac is only just winding up. It’s not just the scale of the environments in Tools of Destruction that impresses, but the attention to every structure and surface found within. It’s more cartoony than Heavenly Sword, but just as excellent on the level of art and design. From fiery refinery planets to icy worlds to weird, swampy marshlands crawling with gargantuan dinosaurs, Tools of Destruction rarely fails to give you some bit of tasty eye-candy to chew on. 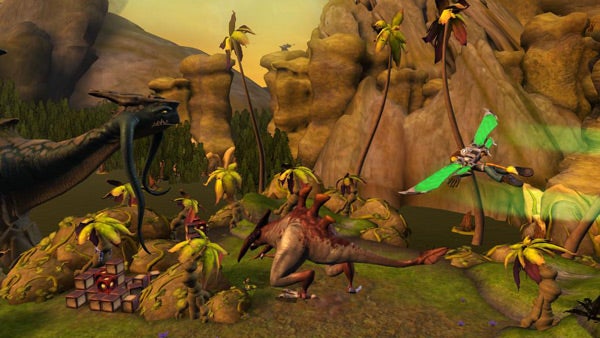 But whereas Heavenly Sword was better to watch than it was to play, Tools of Destruction is instantly engaging. By the time Insomniac had hit Ratchet and Clank’s second appearance, the team had perfected the game’s combination of gadget-assisted platforming and overblown destruction. If you don’t know the series, think two parts Mario to one part Metroid to three parts third-person shooter. With the following games, Insomniac arguably stretched too far into straight shooting territory, but with Tools of Destruction the balance is back where it should be. There’s still a lot of leaping from platform to platform, gliding from area to area and engaging gadgets to reach new sections, but there’s also a lot of blasting hordes of miscreants with an ever-growing, ever-improving selection of bombastic weaponry. The mix just works. 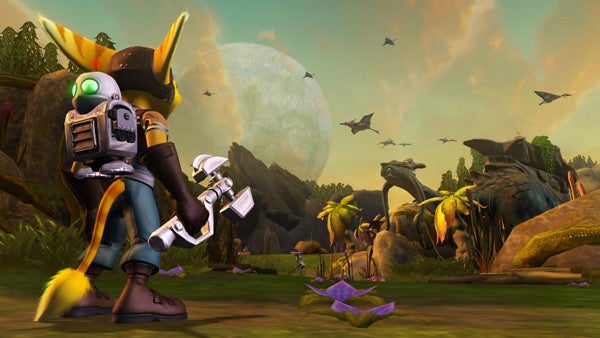 This was always where Insominac’s developers engaged the stranger parts of the imaginations, and the same holds true in Tools. New favourites include devices like the Groovitron, which holds your enemies under a disco-dancing spell, and the Tornado launcher, which throws out a cool, tilt-controlled cyclone that sweeps up any enemies in its path and shakes them around until they implode. As before, weapons are upgradable, but while you can still level them up just by using them, you can also buy range, rate of fire and damage upgrades with crystal collectibles at a local weapons vendor. The result is that even the weediest weapons at the start of the game will transform into hard-hitting baddie-busters by the end, while the toughest arms with the coolest effects just get more and more spectacular as time goes on. 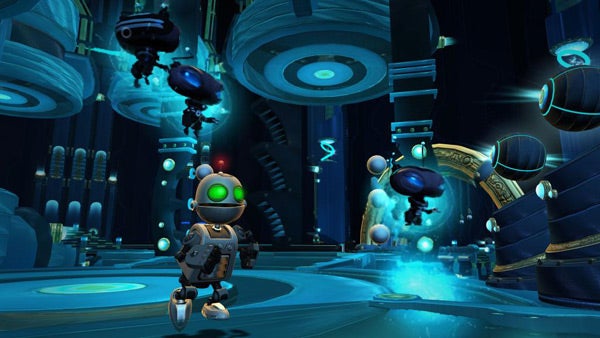 You might have noticed I mentioned tilt-control above, and Tools of Destruction is an excellent example of how Sixaxis support should be done. It’s the main control system for certain weapons, and feels like a surprisingly natural way of doing so, but it also comes into play during certain action sequences, such as when Ratchet uses Clank’s built-in glider to sweep through sections of a level, or when our duo float down through clouds of hostiles in a daring skydive to a planet’s surface. The Sixaxis even gets an outing in nice little puzzle sections, where you try to cross gaps in circuits using a variant on the old rolling ball maze games that used to appear in Christmas crackers. In fact, breaks from the basic platform-blasting action are a real strength of the game. The series has always featured Starfox-style shooting episodes and more puzzle-based solo sections for Clank, but here they’re more epic in scale or more cunning and convoluted than before. In particular, there are some nice chunks where Clank commands a small group of psychic creatures to help him complete objectives. 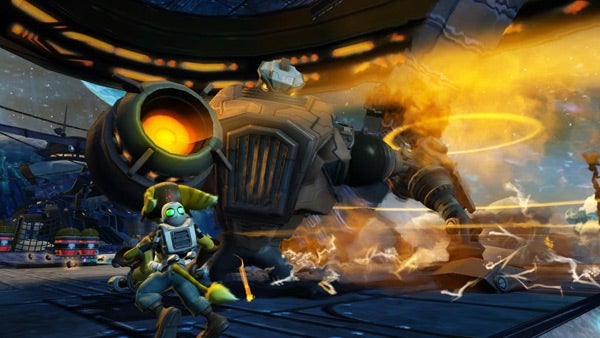 But now we come to the crunch. Just a few weeks ago, when I first played Tools of Destruction, I would have had no hesitation in telling you that it’s the best platform game of the last five years. It’s spectacular, expertly paced and packed with well-designed levels that give you a bit more to do than merely exercise your reactions and your trigger finger. New items like the gun that deploys bouncy gelatinous platforms are brilliantly conceived and executed. The set-pieces are awesome, the difficulty level is well thought out, and even the checkpoints are cleverly paced. All the same, however, Tools of Destruction isn’t a huge departure from the Ratchet and Clanks that came before. If you know the routine – find planet, explore planet, pick up clue or item, discover location of new planet – then there’s nothing on the fundamental level of gameplay that will really surprise or amaze you. Having played Nintendo’s revolutionary Super Mario Galaxy in the interim, I’m pushed to admit that, in a way, Tools of Destruction is a bit old hat. In score terms, it’s clutching for a nine, but at risk of getting knocked down to a still very appreciative eight. And before fans of Up your Arsenal and Deadlocked complain, the lack of online multiplayer hardly helps the cause.

But several factors mean that the elusive nine is still in reach. It’s not just the gorgeous visuals or the new scale that makes Tools of Destruction so special, it’s the way that the game feels imbued with heart, personality and soul. Every member of the cast, from the petulant, self-absorbed villain to the old duffer combat robots that assist you later on, has some endearing quirk or defect, and the script is engaging and witty on a level that both adults and kids will understand. It’s actually made me laugh out loud several times – how many other games have a character admonish you for smashing up a bunch of crates that they’ve just stacked. There’s a real sense of warmth in the relationship between our two heroes that puts them ahead of the rest of the platform-hopping pack. It’s cinematic in the best sort of way – it’s not just a feast of likable eye-candy, but a game that can carry you along on its wave of energy and style. 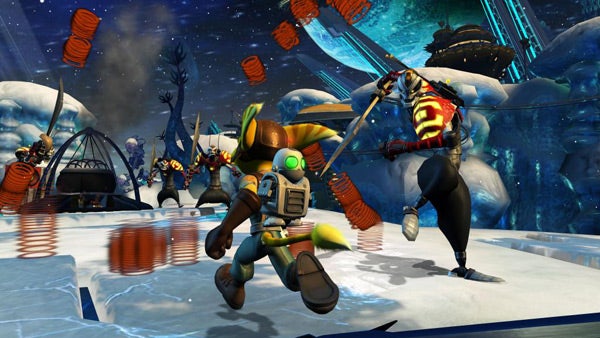 But what clinches it for me is that Tools of Destruction feels like it has been play-tested and streamlined to make it as ludicrously entertaining and flawless as a game can be. Yes, there are times when the camera takes the wrong angle and you die unfairly, or when enemy numbers are a little too overwhelming, but these take up less than one per cent of the game. The rest of the time it’s an effortlessly enjoyable adventure, and one stashed full of enough hidden areas and extra achievements to give those of us who want to do more than just blast through the main storyline something to be getting on with. 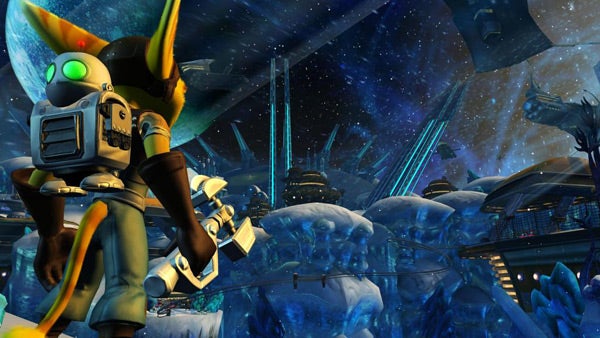 So maybe this is ‘just’ the second-best platform game of the last five years, but that doesn’t make it any less wonderful. PS3 owners can now sleep safe in the knowledge that they have a game worthy of the hardware. Insomniac, meanwhile, can now rest easy knowing that they have built a game strong enough to sell it. Everyone else should feel a little bit jealous, because if you don’t get your hands on this game, you really are missing out on a treat.


Tools of Destruction joins Super Mario Galaxy and Psychonauts as one of the best platform games of the last five years. It might miss out on innovation, but in terms of scale, personality and finely polished gameplay, it’s unsurpassed.