With the DAB network still – rather shamefully, in our opinion – struggling to deliver anything like nationwide coverage, Internet radio is catching on fast. Especially as it offers literally thousands of channels rather than DAB’s 40 or so.


With this in mind, it’s no surprise to find Internet radios becoming increasingly common. Nothing we’ve seen on the Internet radio front before, though, has been remotely like the Q2 we’re looking at today. Designed around a chipset from British outfit Cambridge Silicon Radio, it’s a truly unique product in a variety of different ways. 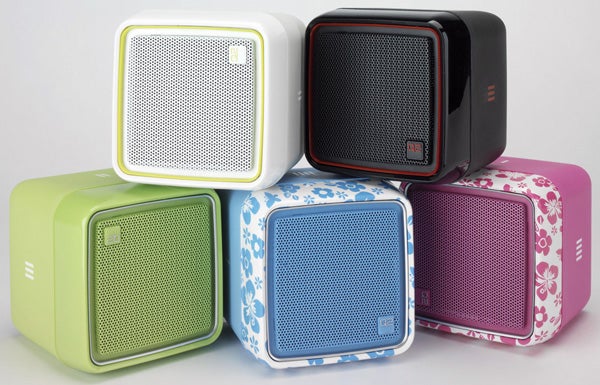 For a start, it looks utterly adorable. Its roughly cubic design gets it off to a great start – especially as its surprisingly diddy dimensions mean it fits comfortably into a typical adult’s hand for carrying around between different rooms. But also neat is the fact that you can buy a Q2 in any of five different colours: white, pink, blue, green and black. What’s more, the blue and pink models really push the design boat out by featuring a floral pattern around the front rim that we’d probably adore if we were girls.


Also notable about the Q2’s design is the rubberised finish of the rear three-quarters of the Q2’s body. This boosts the styling but also, of course, makes the radio less likely to slip from your grasp when carrying it around. 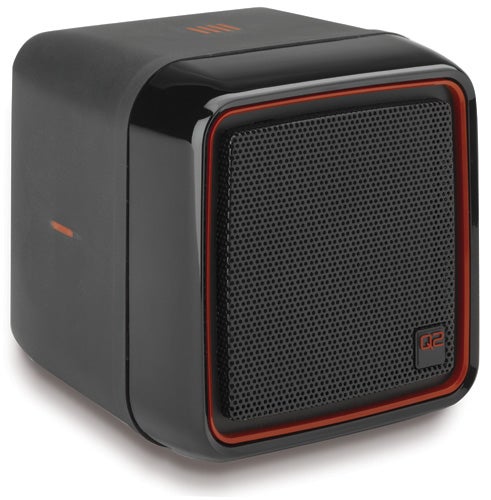 Turning our scrutiny of the Q2’s exterior to its rear, it’s a pleasant surprise to find a headphone/line-out jack on there, as well as an input for attaching the supplied USB or three-pin plug charging cables, and a simple on/off switch. As you’d expect these days, the Q2 doesn’t have to be physically tethered to your PC to work, connecting to it via wireless broadband.


Two other intriguing points about the Q2’s design are its complete lack of any buttons or knobs, and the appearance of little lines on each of the radio’s sides (bar the front and back ones). There’s one line on one side, two lines on the next, three lines on another, and four lines on the final one. And it turns out that these curious lines and the striking lack of buttons and knobs are intimately connected…

The Q2’s ‘killer feature’ is the fact that it lets you change between radio channels and podcasts simply by turning it over. All you have to do is download the Q2‘s simple software to your PC or Mac, fire it up, allocate your four favourite Internet radio channels and podcasts to a ‘side’ of the Q2, and that’s it. From that point on, whichever of the four sides you turn to face up will be the channel the radio plays.


As if this wasn’t clever enough, the Q2 also uses motion-sensing technology to let you adjust its volume; you just tilt it forwards or backwards. Or if you want to instantly mute it, all you have to do is turn it so that the speaker is facing down. If it’s left muted for a while, the Q2 will automatically switch itself into standby to extend the life of its rechargeable battery. A battery which, incidentally, delivered a decent 6-7 hours of use during our tests, even though those tests included running the unit louder for short bursts than most people will feel comfortable with in normal living conditions. 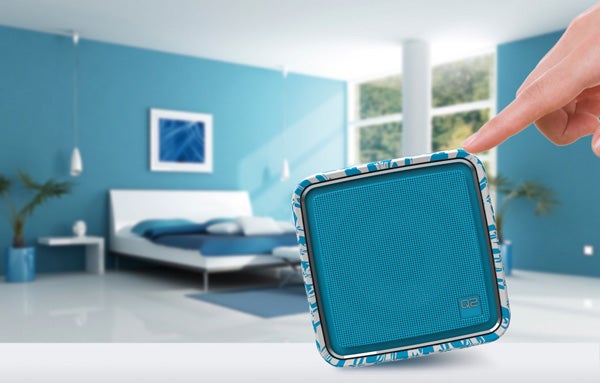 To some extent, the way the Q2 streamlines the potentially hugely complex and borderline unmanageable amount of Internet radio content is nothing short of genius. Just think about it: it dilutes more than 10,000 radio channels – not to mention countless podcasts besides – down to just four, and makes choosing those four no more complicated than turning a cube over.


Yes, you have to first pick your four preferred stations and podcasts via the PC software, but this software is clearly presented, supports direct text searching for preferred radio channels, and breaks the stations down into much more manageable geographic and genre groups for browsing. You don’t even need to have your PC or Mac switched on for the Q2 to work once you’ve set it up.


There is one obvious limitation to the Q2’s approach, though. For it only gives you access to four podcasts or Internet radio stations at a time (with you only able to change them via the PC/Mac software). Still, while we might have liked to find the Q2 sporting an octagonal shape to add at least a couple more channels to the list, the cube shape feels very natural/stable, and four channels is probably enough for a typical user – especially if it’s only going to have to support the tastes of one or two members of a household rather than an entire family.

Overall, though, the Q2 is far and away the simplest way there is to harness and enjoy the wonderfully diverse world of Internet radio, and that alone – even before you take its lovely ‘gadgetiness’, low price and range of cutesy designs into account – could make it a monster hit.


It won’t have escaped your notice that we haven’t yet discussed the Q2’s sound quality. But we make no apology for this, since how the Q2 sounds is arguably of secondary interest critically and commercially to what it does and how it looks – especially since it only deals with the distinctly compressed quality of Internet radio music.

However, it’s still a relief to find that the Q2 doesn’t sound bad at all. It’s capable of reaching volumes loud enough to satisfy – if hardly flood – even pretty large kitchen and conservatory environments, and even at its loudest it doesn’t phut, distort or rattle. There’s a surprising amount of definition in the sound too, and the speakers succeed in hiding, fairly consistently, Internet radio’s tell-tale hissiness.


The biggest problems with the Q2’s sound are that there’s no stereo effect given its single-speaker design; bass levels are rather limited; and the sound is a little funnelled, and thus loses clarity if you happen to be standing right off to the unit’s side. But overall, for most of the time the Q2 sounds a good few notches better than we’d expected it would considering how small and light it is.


Hardcore tech geeks might not like the Q2 for the way in which it streamlines the Internet radio experience. And hi-fi obsessives obviously won’t find the Q2’s audio quality a match for their Denon hi-fis, Sonos multi-room systems or Meridian iPod docks.


But then the Q2 is unapologetically not designed for either of these markets. Instead, it’s an innovative and fun device that for the first time truly opens up the murky but potentially glorious world of Internet radio to the masses. Plus it takes up practically no more room in a Christmas stocking than a Terry’s Chocolate Orange…