Gangs of raiders on the highways? Cockney crooks on the city streets? Russian warlords on the rampage? Rogue cops going crazy in the city? When the normal authorities can’t cut it, it’s time for some extreme justice. We’re not talking about police procedure; about signalling the vehicle to pull over and reading the suspect their rights – we’re talking about blowing them away from a helicopter gunship or about heroic officers that will leap onto the car, stick a gun through the windscreen and fill the perp full of hot lead. It’s the sort of thing you saw in the original Pursuit Force, and now it’s back, only this time a little more (ahem) extreme. 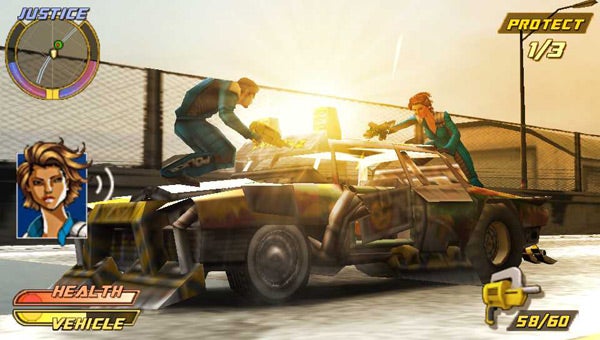 Pursuit Force was actually that rarest of things; not a port or a PSP remodelling of an existing console series, but a genuinely original PSP game. Imagine a turbo-charged version of the old arcade classic Chase HQ, where running a suspect’s car down in your super-powered cop cruiser was no longer enough. Instead you had to get up close and personal with the fleeing criminals, leaping from your vehicle to theirs, blasting them away, then hijacking their ride to get to the next ne’er do well. In between, you had some on-rails shooter sections where you blasted the criminals from the comfort of a great big helicopter gunship.


The whole concept was gleefully ridiculous, and UK developers BigBig studios wrapped it in a tongue-in-cheek Jerry Bruckenheimer movie parody that made Team America: World Police look understated. Even the costumes were camper than a Graham Norton Christmas special. Sadly, the gameplay was never quite as much fun. You were left wanting something with a little more meat and – with some ridiculous difficulty spikes – a little less frustration. 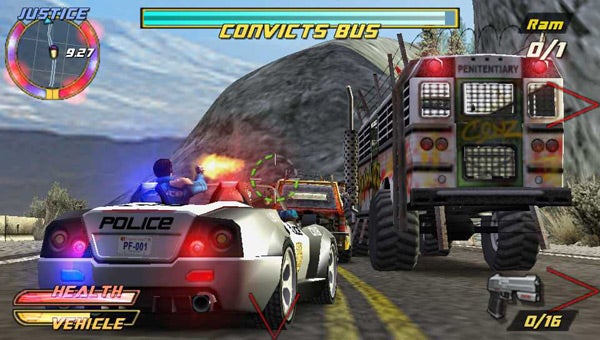 Well, the sequel moves in all the right directions. Right from the opening – a Pursuit Force wedding wrecked by some very unwelcome guests – it keeps the pace relentless and the plot and characterisation fantastically corny, as Mad Max-style gangs are joined by hillbilly scavengers, Soviet warmongers and a hilarious gang of Brit criminals. Visually it’s another strong PSP showcase, with some great background scenery during the various pursuits, a rock-solid frame rate and improved character modelling and animation over the already impressive original. With some nice fake-HDR lighting and bloom effects, it’s probably as close to a big summer blockbuster movie as Sony’s handheld will ever produce. The audio is great, too, with an excellent bombastic score and some thoroughly enjoyable voicework: in Extreme Justice the constant over-ripe radio chatter is a major part of the whole experience.

What’s more, it’s clear that you’re dealing with a game designed with just the PSP in mind. The analogue nub handles steering, the X and Square buttons cope with acceleration and braking and you use the shoulder buttons to zoom in and fire your current weapon. While in a vehicle you don’t even have to worry about aiming; the auto lock-on ensures you can hit your target once in range. 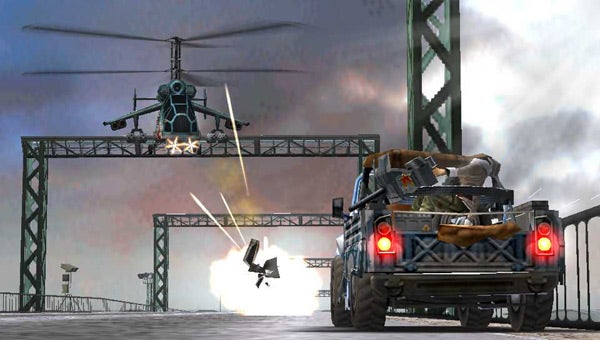 And when it works Extreme Justice is undeniably thrilling. The first couple of levels make it easy for you, with only a handful of vehicles to pursue and criminals to bring to justice. It really takes off, however, with a chase through the city streets following the aforementioned British gang, the Syndicate. While the cheerful mockneys – who seem heavily indebted to Guy Ritchie films and Don Cheadle’s performance in the Ocean’s 11/12/13 films – yammer on, your hero leaps from pursuit car to sports car to speeding motorcycle, hammering buttons to hold onto speeding, swerving vehicles and taking bigger risks with every move. From here the game throws in some inspired set-pieces – gunfight on the wing of a moving plane, anyone? – and keeps the action flowing like wine at a really good dinner. 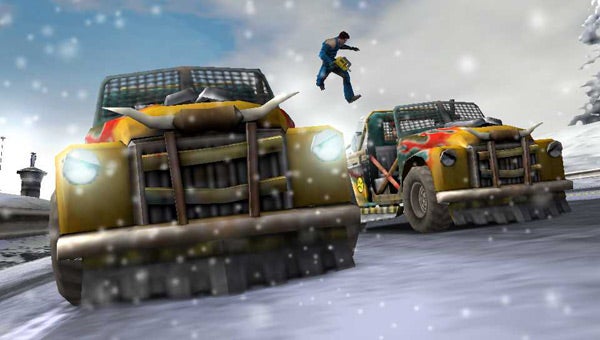 What’s more, there’s more variety this time around. You’ve still got your straight chases, on-rails shooting sequences and escort missions, but the game isn’t afraid to mix things up, making you the hunted, not the hunter, or adding special conditions or more intricate boss battles when it needs to. Plus the game now packs in a few on-foot missions for some more standard-issue third-person shooter action, along with the odd well-conceived sniper section. Throw in some nicely implemented computer-controlled buddies, each with their own special skills, and at times Extreme Justice threatens to outdo Syphon Filter: Logan’s Shadow as the best action game on PSP. You can’t help but appreciate the work BigBig has put into making it fun. 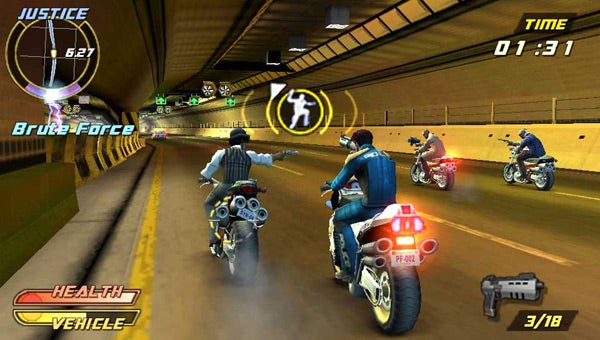 But while Extreme Justice is a better game than its predecessor, it’s still haunted by the same problem that dragged down the original Pursuit Force: an inconsistent and frequently exasperating difficulty level. Now, Extreme Justice isn’t anywhere near as bad. For one thing, it features mid-mission checkpoints, and for another it has a nice mechanism whereby you can use energy built up in your justice meter – otherwise used for extravagant stunt shooting – to recharge health in a pinch. All the same, you’ll find you’ll breeze through some sections on your first attempt, while others will see you returning to the same old checkpoint time and time and bloody time again until you finally catch a break, the stars align, and you manage to survive the crazy combination of baddies, conditions and time limits. At its worst, Extreme Justice isn’t so much a test of skill as one of persistence. How many times can you be bothered to chase down those cars or tackle that boss battle before you pull the UMD out of the back of your PSP and throw it against the wall?

Nor does it help that the scattered on-foot missions really aren’t all that much fun. Suddenly the game falls into the same pitfall as most PSP shooters – the analogue nub just isn’t built for precision aiming, and trying to draw a bead on a moving or partially covered foe is an absolute nightmare. The lock-on aim still works, but only when your foe is really up-close. To make things worse, your enemies only have two moves; the standard ‘hide then pop out’ manoeuvre beloved of third-rate game baddies everywhere, and the equally uninspired ‘rush in a zig-zag-line’ attack. The latter wouldn’t be quite so dangerous if you had any hand-to-hand combat skills, but the game suddenly drops the punches and neck-breaking manoeuvres you can pull off easily in the vehicle sections for a quick-time-event sequence that – should you get it wrong twice – will see you dead. As a result, you learn to meet each on-foot mission with an inward groan, knowing full-well the mix of boredom and frustration that awaits. 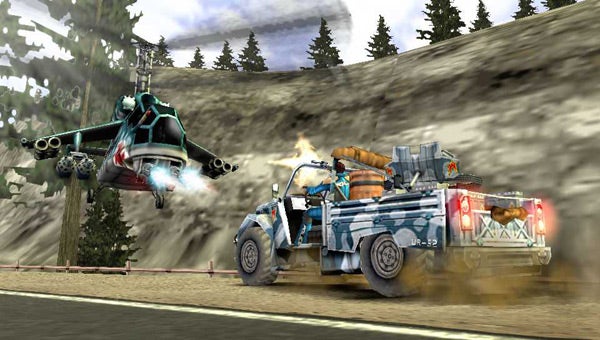 And, while I’m moaning, the use of quick-time-event sequences in boss battles really should be outlawed by the UN. Extreme Justice only gives us further evidence of why.


On the plus side, the game packs in a considerable amount of gameplay – the missions in the main story mode will last you considerably longer than the average PSP game, and you can replay them for bonuses after completion. There’s even multiplayer action this time around, though the fact that it’s all ad-hoc mode rather than infrastructure means you might find it hard to find a game. 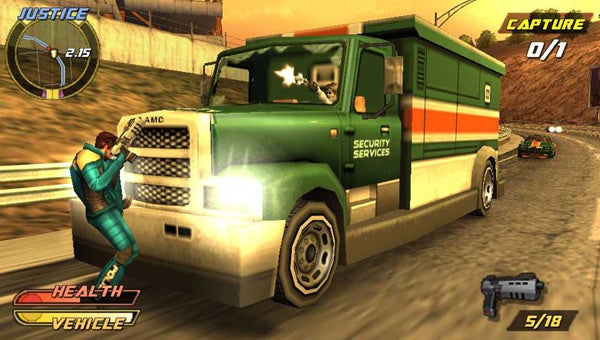 Provided you can steel yourself through the bad times you’ll enjoy the new Pursuit Force’s good times very much indeed. All the same, the levels of annoyance involved do spoil the party at intervals throughout. It’s a shame, because this burgeoning franchise does so much right; it’s a perfect fit for the PSP and – opened up and intelligently enhanced – would make a superbly cinematic action game on the grown-up PS3. I hope BigBig get the chance, because if its next game could match the wit and style exhibited here with flawless gameplay, the Force would finally get the justice they deserve.


A solid PSP blockbuster enhanced by great character design and the brilliantly overworked action-movie feel, but let down by poor on-foot action sequences and some badly-judged difficulty spikes. Worth pursuing if you have the patience to do it justice.