Wow. I didn’t see this coming at all.


Pure is a nice reminder that not everything in the games industry is predictable. A new property from a new name, Black Rock Studio, and Disney Interactive, it was one of those games that I thought looked vaguely interesting but didn’t exactly set me alight with fevered anticipation. I was expecting a decent off-road racer, nothing more, nothing less. Maybe I should have known better. In a previous life as Climax Racing Studios, Black Rock were responsible for the MotoGP series, several titles in the ATV Offroad Fury franchise and the under-rated Rally Fusion. None of these games have caught the mainstream imagination in the way that, say, the Need for Speed or Colin McRae titles have, but I really hope that Pure just might. To be honest, I love it to bits. 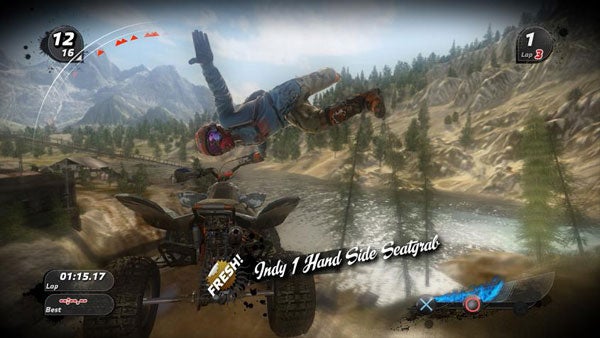 On paper it might not sound too promising: an arcade quad-bike racing game with a stunt mechanism reminiscent of the SSX snowboarding games. Basically, you perform stunts to earn boost, holding back the left stick to charge up power before each jump, releasing it as you take to the air, then pressing the A button in combination with different directions of the left stick to pull off different manoeuvres. On landing successfully your boost gauge charges, but cleverly you don’t have to use it. Instead, you can keep charging it so that you can pull off bigger and more impressive stunts. Save enough, and you can access intermediate stunts using the B button. These take a bit longer and prove a bit riskier, but earn you more boost. Save more and you unlock the Y button expert stunts. Save even more, and you can even pull off an epic, grandstanding super stunt. It might not be entirely original, but it’s a great system, and one that encourages you to balance short-term needs vs. long-term tactics. Do you use your boost now to stay in the race, or hold it back so that you get the bigger payback later? 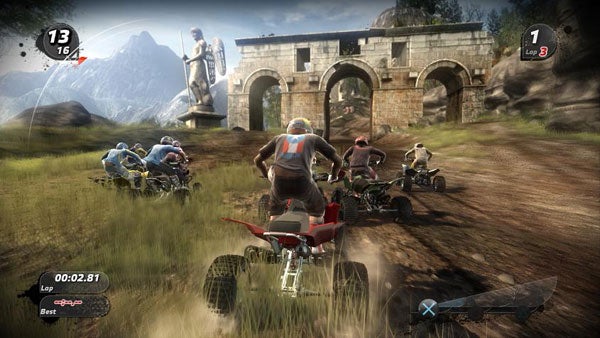 On the screen, this cool mix of gameplay comes alive. To my mind, Pure is the most madcap racing experience since Motorstorm; one where fifteen riders race over rollercoaster landscapes, flying through the air and frequently smashing into the ground. Your fellow riders aren’t aggressive in the way that, say, Motorstorm’s can be, but they certainly play tough and there’s no obvious ‘rubber-banding’ going on. The handling and physics, meanwhile, are precise and gritty, not quite hitting Motorstorm’s incredible seat of the pants feel, but certainly approaching it. It’s the tracks, however, that are the stars of the show. Pure’s courses aren’t merely undulating – they’re chock full of monstrous jumps, terrifying ridge paths, intrepid climbs and sudden drops. They demand your constant attention.

Luckily, it’s hard to look away for the simple reason that Pure is a seriously beautiful game. Black Rock has created tracks inspired by real world environments like the Italian lakes, the mountains and glaciers of New Zealand, the Californian deserts and the sierras of New Mexico, with the odd tropical excursion to Thailand for good measure. Each has its own distinct atmosphere and some truly stunning scenery. Gorgeous mountains, exotic temples, glinting glaciers classical architecture – this one packs it all in. In fact, the only thing preventing you from admiring the view is that you’ll be hurtling through it all at a dizzying speed, trying desperately to keep your quad bike on the track or concentrating on pulling off the perfect trick in the split-second before your rider dives nose-first into the ground. The animation of bikes and riders is awesome, with realistic movement and lifelike suspension on the bike. Maybe Motorstorm has a little more detail in the vehicles, but there’s really very little in it and Pure has more in the way of scenic variation. 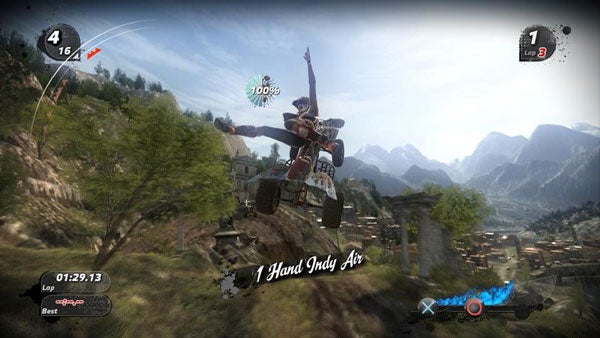 The main single-player mode is modelled as a world tour, with ten tiers each consisting of several events. These begin with simple three lap races, but soon take in sprints (fast, five lap races played out over shortened courses with the emphasis on speed) and freestyle events (earn as many stunt points as you can before your fuel runs out). These additional events add some spice to the action, the sprints acting like a breathless distillation of the regular races, the freestyle events giving you more room to trick and more immediate rewards for doing so. Impressively, Black Rock has also got the difficulty curve almost spot on, with the first few tiers providing a nice, simple intro to the game and the intermediate to final tiers offering a successively bigger challenge. 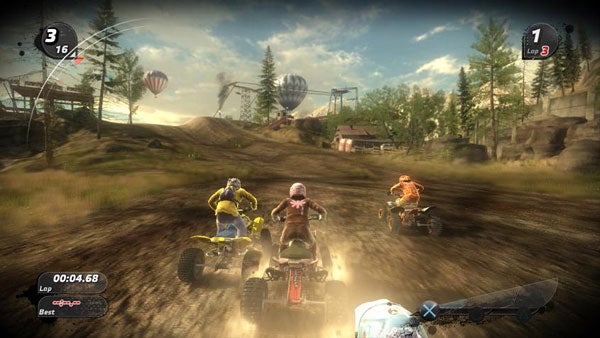 And by the time you reach those later tiers you’ll be pulling off some truly impressive tricks, chaining together the basic manoeuvres with rolls and spins and some neat little arm and leg-waggling tweaks that prove you are the man when it comes to daredevilry and daring do. Make no mistake: Pure is THE game of the moment for show-offs. Get some mates round and take turns playing it on a big HD screen. They’ll love the style, they’ll love the crunchy rock soundtrack and you’ll get the chance to showboat like there’s no tomorrow. Who couldn’t love the way the screen takes on a spectacular slow-mo blur effect when you pull off one of the super stunts? Pure is just that kind of game.


In fact, my only real worry about it is that it might be a bit superficial. Black Rock has made a bold attempt to add depth by adding a selection of riders – each with their own signature tricks – and an extremely detailed bike customisation and upgrade feature, but neither is 100 per cent satisfying. The customisation feature allows you to build several specialised bikes using a huge library of custom parts, more being unlocked as you make progress through the game.

I guess the problem is that while your changes have cumulative benefits and alter the overall look of your quad-bike, the vehicles don’t have the familiarity or iconic style of the cars in a Gran Turismo or Forza, and putting in a new engine or changing the brakes doesn’t have the same glamour it does when you’re hot-rodding a Mustang or a humble Honda S2000 in those games. The garage feature also benefits from and loses out to an easy one-click option which instantly produces an optimised racing or freestyle setup, and while you can spend ages creating and upgrading different bikes for different events, after a while the thrill goes and you start using the automated option. 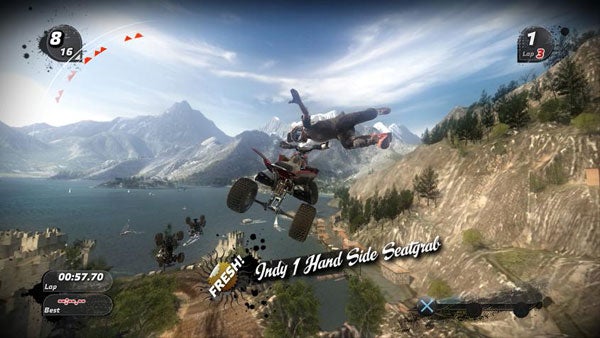 The bigger issue, however, is that when it comes down to it the single player mode just isn’t all that expansive. After a while the new tracks dribble through rather than flood in and you find yourself racing the Italian or NZ tracks for the umpteenth time, still having fun, but feeling slightly let down. Pure’s central game mechanics are so tight and the courses so enthralling that you could never have a dull time playing it, but you can’t help wishing that this was a game of Burnout: Revenge rather than Burnout 1 proportions. 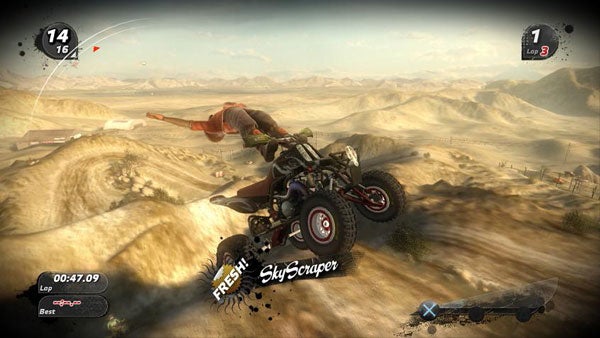 Of course, there’s a hugely enjoyable online multiplayer option to make up for this, with smooth simultaneous sixteen-player action, not to mention a dedicated online only game mode where you can compete over particular feats of daring. All the same, I’ve come to the conclusion that this is the beginning of something great rather than its full realisation. No problem. That is more than enough to be getting on with, and more than enough to make Pure one of the easiest and happiest recommendations I’ve made this year. Really, you don’t have to think too hard about it; just buy it, play it and have a great time.


Pure isn’t the biggest or deepest off-road racer out there, but you’d have to look hard to find one that puts out a better time. Black Rock Studios has created a great crowd pleaser and, hopefully, just the start of something great.