Ask anyone what countries they associate with cutting edge AV technology and the answer you get back will almost always be Japan or Korea, with the occasional Taiwan, China or America thrown in to keep you on your toes.


One country we’re certain you will NOT hear mentioned is Norway. Yet in fact the home of the elk and pretty fjords genuinely does contain a true AV force to be reckoned with: Projectiondesign.


As their rather inelegant name suggests, Projectiondesign’s key business is projectors. And sitting at the top of its current home cinema projection range is the Action! Model Three 1080: a Full HD DLP model yours for the cool sum of £10k. Or nearer £15k according to some sites we’ve seen it on. Crikey.


This sort of price would usually get you at least somewhere in the vicinity of a three-chip DLP projector, which uses separate DLP devices for the red, green and blue parts of the image in order to dispense with the colour wheel systems – and their attendant video noise and running noise issues – required by single-chip DLP projectors. 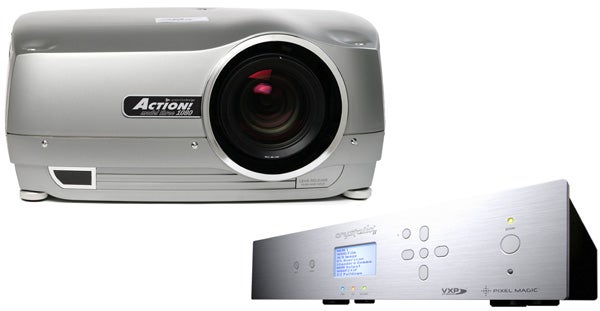 But the Action Model Three is definitely only a single-chip model, so we’re going to have to look elsewhere in our bid to understand where its hefty price comes from.


Some clue as to its ‘high-endness’ can be seen in its design. For starters, it’s absolutely huge; a fat, not especially attractive hulk of a thing that couldn’t be further removed from the remarkable smallness and elegance of the only other Projectiondesign model we’ve tested, the much cheaper Action! M20.


It’s also very heavy by home projection standards, hinting at some high quality innards and plenty of electronic screening in the chassis itself.


By far the biggest indicator that the Action! Model Three is anything but ‘standard issue’ home cinema kit, though, is the fact that despite the relative enormity of its bodywork, it still can’t fit all of its video processing in. Instead it ships with a separate video processing unit with a Crystalio II logo on the front.


The Crystalio II can take in any sort of video signal, of any resolution, and convert it to fill the full 1,920 x 1,080p resolution of the projector, before feeding it out digitally to the projector.

Input jacks on the Crystalio II include an impressive four HDMIs, two SDI inputs, a USB, an Ethernet port, four composite video inputs, four BNC component inputs, one five-BNC PC input, and two S-Video inputs. In other words, as well as allowing Projectiondesign to give you a higher-spec video processing engine than would have been possible if the necessary circuitry had been included in the projector, the extra processing box also enables you to connect up way more sources than usual.

The thing about the Action! Model Three that really explains its cost, though, is Projectiondesign’s unique DuArch technology. This finds the projector being driven simultaneously by two individually controllable lamps and two separate 7-segment DLP colour wheels, delivering a truly impressive 8,000 hours of lamp life (if you run the projector in a provided ‘eco relay’ mode) and what Projectiondesign claims are profound improvements in contrast and brightness over what any single lamp projector could offer.


As a result of the DuArch system, in fact, we find the Action! Model Three promising a truly phenomenal claimed brightness output of 2,500 ANSI Lumens, and a native contrast ratio of 7,500:1. 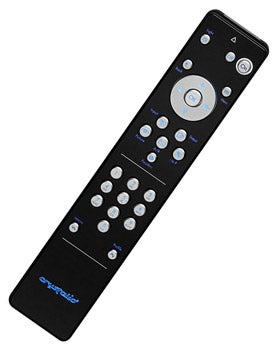 If you’re thinking this contrast ratio doesn’t actually sound very high, we must stress that the key word is ‘native’. In other words, unlike practically all LCD models and Sony’s SXRD models, the Action! Model Three does not need to dim its brightness in order to achieve its deepest black levels. This should mean that dark scenes should look both more stable and more dynamic (in terms of the ‘gap’ between a picture’s brightest and darkest elements) than is possible on projectors that use dynamic irises to limit the image’s brightness output during dark scenes.


Before we get too carried away by this native contrast, it’s worth adding that JVC’s outstanding D-ILA projectors, the HD1 and HD100, deliver native contrast ratios of 20,000:1 and 30,000:1 respectively despite only costing £2,900 and £5000. But they certainly can’t hold a candle to the Action! Model Three’s maximum brightness.


Another key ‘high end’ touch is the fact that this projector can be bought with any of six different lens options, ranging from an ultra-wide angle 0.75:1 affair for near projection use, to a ‘super tele-zoom’ 3.7-6.5:1 option.

The Action! Model Three also piques our interest by being the first projector we’ve seen to employ Texas Instruments’ Spoke Light Recapture technology for improving colour reproduction, especially in secondary colours, as well as Projectiondesign’s own RealColour system for fine-tuning colour tones to within an inch of their lives.


There’s loads more stuff on the projector’s spec sheet and within the tidy onscreen menus we could talk about, but frankly life’s too short! And in any case, it’s high time we started to find out if all the Action! Model Three’s uncompromising touches find their way into its final picture quality.


Feeding this high-end projection monster the recently released Blu-ray of ”Master and Commander: The Far Side of the World”, it’s immediately obvious that the Action! Model Three is indeed rather special.

For instance, the image’s sheer dynamism is enough to have your eyes popping out of your head. I’ve seen some mighty fine projectors in recent times, but not a single one of them has delivered the same extremes of dark and light within a single frame that the Action! Model Three manages. A perfect example of what I’m talking about can be seen in the below-decks sequence of ”Master And Commander” where the de rigueur ‘mad old coot’ talks about how the ship’s first mate is a ‘Jonah’. The old chap himself appears bathed in an almost spotlit glow, while the backdrop behind him is almost completely dark. And on the Action! Model Three the extremes of this lighting technique look so dramatic that the scene takes on almost poetic proportions. Stunning.


Almost as stunning is the amount of detail and sharpness in the image. The combination of the high-end processing in the Crystalio box, the projector’s native Full HD resolution and the clearly uncompromising optical system and lens combination make a good high def picture look so detailed, three-dimensional and clear that you feel you could reach out and touch it.


The ”Master And Commander” Blu-ray can look a bit noisy at times on the Action! Model Three, but take it from me that every last pixel of that noise is down to issues with the film’s HD encoding, and nothing whatsoever to do with the projector’s own electronics. Personally I feel like all Blu-ray releases should be tested on an Action! Model Three before they’re launched, since its exceptional accuracy leaves absolutely no hiding place for source-based video noise of any sort.

Still more good news comes from the Action! Model Three’s colour response. For as well as delivering terrific vibrancy with ”Master And Commander’s” really colourful scenes (mostly based around the Galapagos Island sequences), colours are rock solid, almost infinitely subtle in blend, and best of all superbly natural in tone, even when showing the film’s frequently very tricky low-lit skin tones.


Even more proof of the Crystalio box’s worth can be seen in the projector’s handling of standard definition, which is ‘souped up’ to look like something genuinely approaching HD without the processing noise often caused by the upscaling process. 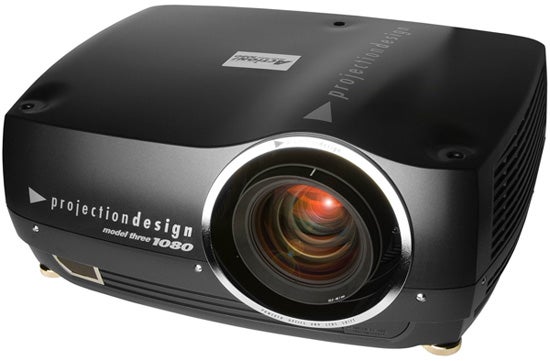 Only one thing stops me giving the Action! Model Three a straight 10 for picture quality, and that’s a tendency for motion on the projector to look a little more blurred than I’d ideally like.


One other issue with the projector you ought to be aware of is that its dual colour wheel and lamps mean that it runs a little loudly versus most normal home projectors. But then if you can afford 10 grand on a projector, you probably also either have a big room to put it in where the sound can be lost in the space, or you can afford to build it into some kind of soundproof cabinet.


If you’re looking for a projector to drive a really large home cinema room, the Action! Model Three’s dual lamp technology makes it almost uniquely suited to the job. However, I have to say that for most ordinary folk with relatively ordinary spaces – and bank balances! – to work with, the Action! Model Three’s £10k price tag really does look rather high when you think that you can get JVC’s HD100 for under £5k, and Planar’s remarkable new full HD DLP PD8150 (which we’ll be reviewing soon) for £4,400.