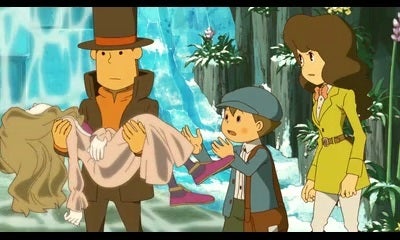 If you are a stranger to the puzzle-solving Prof. then a description might actually put you off. The Layton games are effectively puzzle compilations, full of logic puzzles, spatial puzzles, sliding-block puzzles, maths puzzles and assorted other conundrums, of the sort you might find in an IQ test or mental workout.

The puzzles are contained within a framework of exploration and adventure, as the Professor and his sidekicks, Luke and Emmy, wander around a series of environments, linked on an overhead map, chatting to an eccentric cast of characters and getting to the heart of the mystery at the centre of the game.

Layton works because, while the puzzles alone would be intellectually engaging but otherwise quite dry, the exploration, the story and the tone keep you pushing through them. You want to take each brainteaser down, but even more you want to find out where the tale is going. 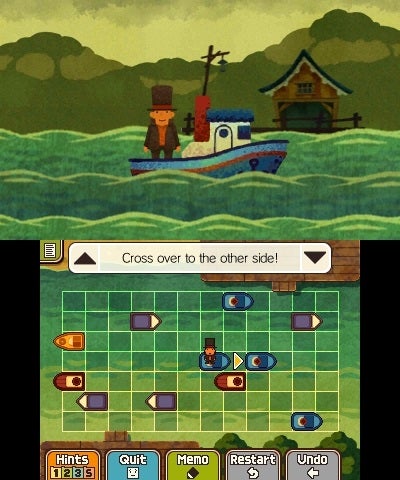 The Azran Legacy is no different. This time the crew find themselves in cahoots with another archaeologist, Professor Sycamore, who’s found the living legacy of an ancient civilization. The bad news is that this is also the target of a sinister organisation, Targent. After a heroic escape and some detective work in London, the team set off on a globe-trotting adventure that puts them on a collision course not just with Targent, but also with returning villain Jean Descole. Cleverly, the mysteries of The Azran Legacy tie in with events we’ve seen in the previous games, while also bringing in a range of familiar faces – as well as a few brand new ones.

The Azran Legacy has a more adventurous feel than previous games, with a wider range of exotic locations and a bit more derring do. It even finds time for an action sequence, albeit one with a forgiving nature and a puzzle-focused twist. Yet the overall tone is classic Layton, from the nicely-scripted interplay between the main characters to the elegant mix of English, continental and Japanese anime styles.

It presents a steampunk vision of a world that seems caught somewhere between the 1920s and the 1970s, yet there’s nothing heavy handed about the setting or the themes. As your team gets onboard their elegant airship to track down another Azran artefact, it’s almost impossible not to get caught up in its charms. 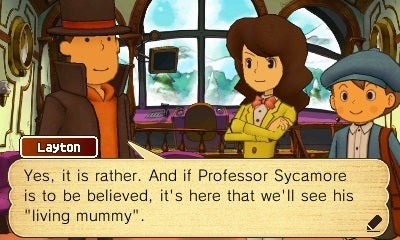 Like its immediate predecessor, the latest Layton also plays to the strengths of the 3DS. The graphics aren’t astonishingly detailed, but they’re beautifully drawn, and The Azran Legacy ditches the static 2D scenes of the DS games for a nicely-rendered 3D view you can pan and occasionally zoom around to find characters to talk to, puzzles to solve and valuable hint coins. Cut scenes, meanwhile, make the most of the 3DS’s 3D screen, giving them a depth and impact that they don’t have in 2D. The touchscreen controls are smart and intuitive, and you never need to touch a button or the analogue stick. It’s a game that anyone from eight to eighty could pick up and enjoy.

The puzzles themselves, of course, start off tough and only get more challenging, and a few of the maths ones are particularly awkward if you haven’t got that kind of mind. Yet the Layton games have always done their best to help you, and The Azran Legacy still allows you to spend the hint coins you collect while exploring to unlock up to three hints per puzzle. You don’t have to use them and you might not even need to, but it’s worth collecting them for the harder puzzles, particularly as failing a puzzle and having to restart it usually means a reduction in your score. 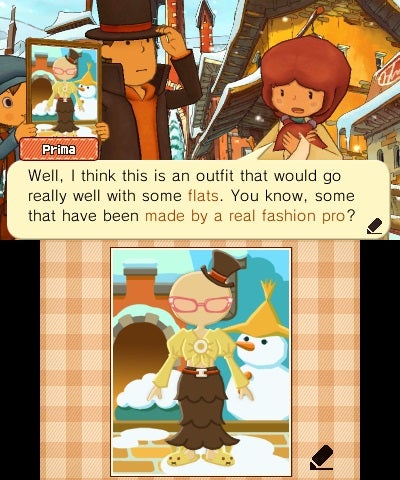 Along the way we get three new mini-games. One, a fashion game where you have to select garments for each subject according to their demands, is a little uninteresting, but ties in to the range of collectible apparel you’ll find elsewhere. Blooms and Shrooms, where you have to place flowers in order to spread out beams of natural energy and revive dead trees, is bewildering at first, but quite compulsive once you get stick in. The highlight, though, is Nut Roller, where you help a little squirrel get a nut through a maze of obstacles, working not in a Super Monkey Ball style, but by using stones and tree-sprouting seeds to block holes or make a barrier.

It might be tempting to dismiss The Azran Legacy as another charming little game – a palette cleanser between the blood and thunder action games, the high-tech cinematic blockbusters, indie breakthroughs and sprawling fantasy epics. But that’s deceptive. It’s surprisingly lengthy with enough drama and variety to keep you engaged for the duration, and the more you play, the more the obsession grows. And while this might not be the last game in the series, you have to applaud the development team at Level 5 for leaving the saga in its current form behind and starting something new before it goes stale. It’s a fitting capstone to one of the most lovable series to grace any platform in the last decade.

Professor Layton bows out (for now) with his biggest and most adventurous puzzle-solving drama yet. If you’ve played the previous titles then you can pick up the latest entry in confidence. It’s another elegant compendium of conundrums held together by a brilliant Layton tale. If you haven’t then this isn’t the game to start with, but it is a fitting climax before the curtain falls.