If you want a fan that can deliver a strong stream of air, the Pro Breeze 40-inch Tower Fan fits the bill – it's one of the most powerful tower fans we've reviewed. With that power, comes the downside of noise; you'll certainly hear this fan in action. Build quality isn't quite as good as we'd expect at this price, either, so you may want to look elsewhere for something a little more stylish.

The Pro Breeze 40-inch Tower Fan is one of the most sizeable models on the market, and with an AC motor rated at a powerful 45 watts, it promises to shift plenty of air. Indeed, our tests confirmed exactly this, but it does so at the cost of noise and pretty basic functionality in comparison to other tower fans.

Pro Breeze 40-inch Tower Fan – What you need to know

The Pro Breeze 40-inch Tower Fan whips up a hurricane

At just over a metre high, the Pro Breeze 40-inch Tower Fan is about as big as fans get. Look closely, though, and you might feel shortchanged by the fact that it’s effectively a 32-inch tower fan, sitting slightly wonkily atop an 8-inch riser. To be fair, at 53cm (21-inches) long, its grille is bigger than typical for even a 36-inch tower.

Turn it on and its power becomes immediately clear. Up-close you’ll feel a strong breeze across the grille’s full height, and powerful movement of air even from across the room. In fact, if anything it’s too forceful at the default, lowest setting of three – you’d only want to be directly downwind from it on the hottest of days. Even then, you’d want to be some distance away.

While not dramatically louder than usual for a tower fan, the ProBreeze has a slight whine that stands out more from background noise. Running alongside two other tower fans, turning off the ProBreeze seemed to make by far the biggest difference to room noise.

There are basic controls, but the Pro Breeze 40-inch Tower Fan gives you what you need

The Pro Breeze 40-inch Tower Fan has comparatively basic controls, and isn’t exactly awash with features. Its top panel is home to touch-sensitive buttons for power and oscillation, and also offering the ability to cycle through its three speeds and set a shut-off timer.

Maths fans will enjoy the simple LEDs that display the latter in binary fashion, lighting up for combinations of four, two and one hour to indicate up to seven hours in one-hour increments. The control panel points straight up, though – even sitting nearby it’s hard to make out the info it’s presenting. 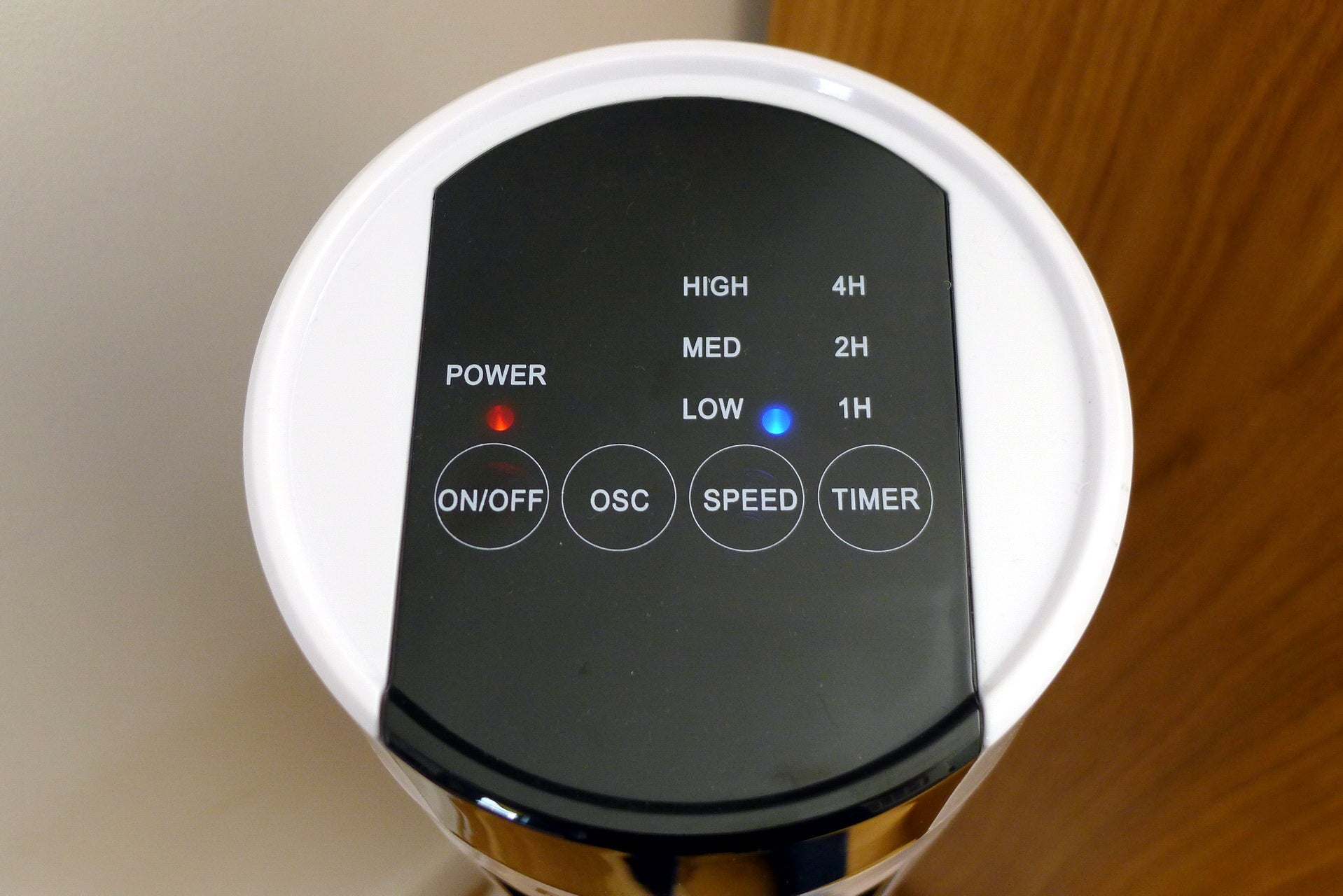 Tower fans aren’t usually swimming with features, and while this one does have 90-degree oscillation and a remote control, there’s no ioniser, fan mode control or thermometer. The remote is basic, mirroring the same four buttons found on the fan itself. There’s no Night mode, although the fan’s LEDs aren’t as bright as some. 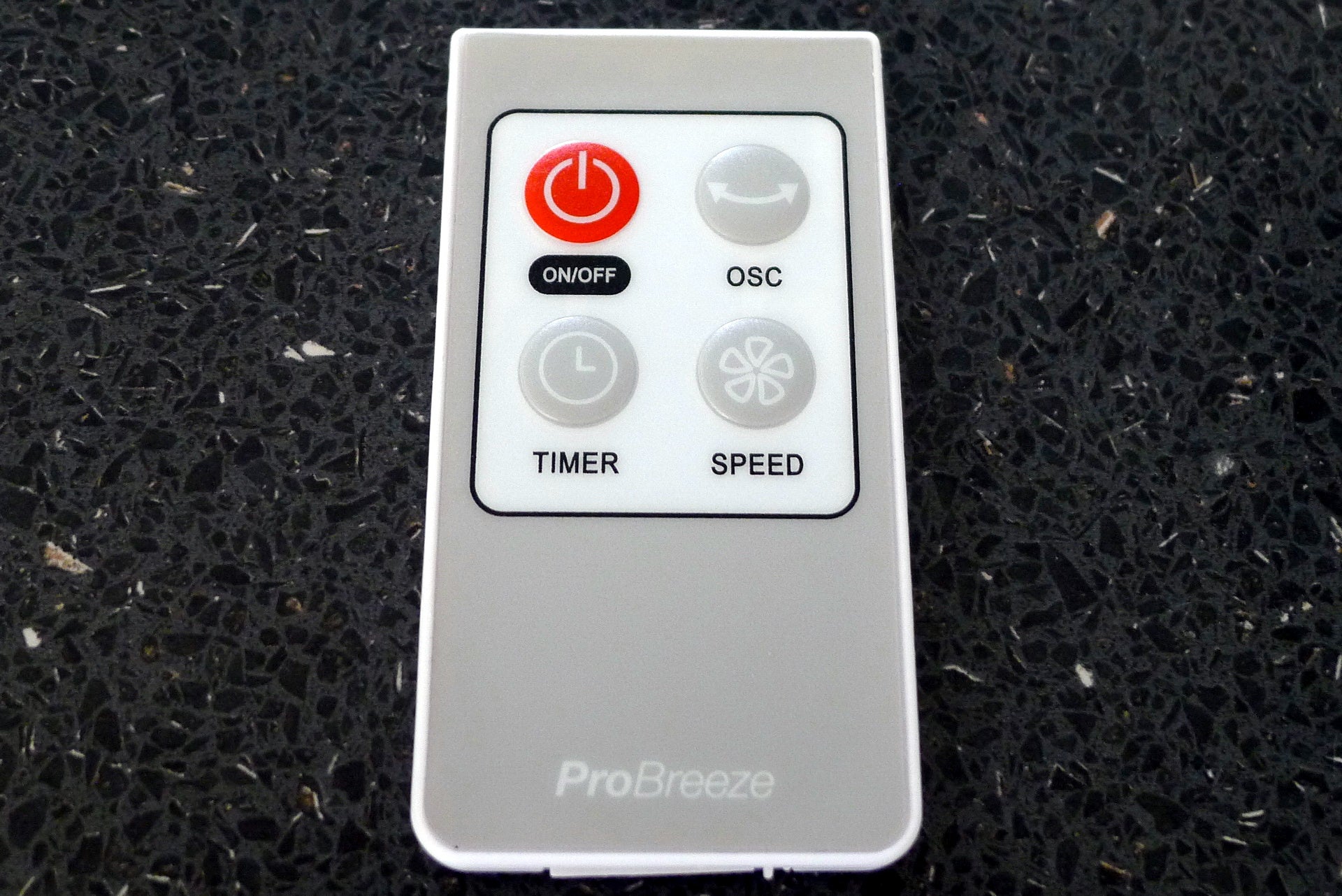 The remote control is similarly as basic as the control panel

The ProBreeze 40-inch Tower Fan is a big fan, producing numbers to match

Unfortunately, this prodigious movement of air comes with significant noise. One metre from the front we measured 46.2dB at low power, and 54.5dB at maximum. Even when sampled at a right angle, completely away from the airflow, we recorded 43.4dB at minimum and a maximum of 48.8dB.

Power consumption, too, was high when compared to fans with more efficient DC motors. Even at the lowest speed this fan consumed 24 watts, with this rising to 35 watts at top speed.

This is a remarkably effective fan, shifting large quantities of air over significant distances. As such, it could be an ideal way to circulate air around comparatively large homes or a small office. However, its lack of advanced features and awkward controls make it less practical than we’d like, and its comparatively high noise levels rule it out for quieter environments. In most cases, we’d be happier with a quieter fan, even if it was slightly less effective.