Primare built up a reputation during the 1990s as a manufacturer of high-class hi-fi components, but as it moved into the new millennium it became one of several hi-fi brands to start muscling in on the burgeoning DVD market. I was lucky enough to test the company’s second DVD player, the V10, back in 2001 and even in those relatively early days of the format it was clear that the Swedish company knew how to craft a damn fine DVD deck.


Fast forward eight years and those skilled Scandinavians are still turning out beautifully built, performance-led players, the latest of which is the DVDi10. But this is no ordinary DVD deck – it’s billed as a ‘single box solution’ for video and audio, and as such boasts an integrated 2.1-channel amplifier, DAB/FM/AM radio tuners and iPod control.

The DVDi10 makes its high-end origins blatantly clear from the moment you yank it out of the box. It’s styled with that sultry, minimal design ethos that only equipment over a certain price can pull off, giving it an esoteric air that enthusiasts will gobble up.


A hands-on investigation also reveals the DVDi10 boasts brawny build quality, with all-over metallic bodywork, a thick front panel and three isolation feet on the bottom. The fascia is finished in brushed black but the unit is also available in Titanium if that floats your boat. Either way, the DVDi10 is a classy piece of kit.

Alongside the disc tray is an informative but small display panel illuminated in green, and on top is a row of bullet-like buttons governing volume, up/down, play/stop and standby. They’re not labelled but a row of icons lights up in the panel above them when the unit is activated. Also found on the front panel is a 3.5mm minijack that doubles as a headphones output and an input for MP3 players.


The integrated amp means there are many more connections on the back than your average DVD player. On the video tip, you’ll find HDMI, component, S-video, composite outputs, as well as a SCART socket – remember those? Audio needs are well-served too, with three sets of analogue stereo inputs, two sets of outputs, a subwoofer pre-out plus optical and coaxial digital audio outputs.

Elsewhere you’ll find an iPod connection, which enables you to control your portable player using the unit’s remote and send metadata to the front panel display, but you’ll need an optional cable to hook it up. It’s joined by RS232 and IR ports for custom installation use, radio aerial inputs (F-type screw and springclip) and sturdy binding posts for the left/right speakers.


It lacks digital audio inputs and a USB port wouldn’t have gone amiss at this price, but the Primare does feature an analogue-to-digital converter which makes connected analogue sources available from the digital outputs, should you want to pass them onto an external recorder or amp. 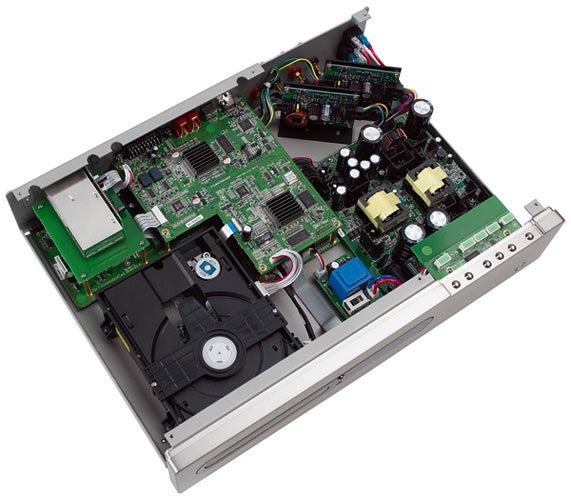 The DVDi10 certainly isn’t cheap but after glancing at the specs you begin to understand why. The star of the show is the Genesis FLI2300 video processor, which handles video upscaling duties (up to 1080p), and it’s joined by an Analogue Devices ADV7320 video DAC. Then there’s the 2.1-channel amplifier system, powered by an improved version of the modular Class D technology used by the CDi10, the CD/receiver combi on which this unit is based. Not only does this kick out 2 x 75W of audio power, it also saves space internally and generates a low amount of heat.


It’s also worth noting that the DVDi10 plays MP3 and JPEG from CD or DVD but not DivX, while DAB radio fans will also be interested to hear that the DVDi10 offers 10 presets and 196kHz/24-bit conversion, resulting in superb sound quality.


But in operation the DVDi10 is something of an oddity and its quirks take a while to get used to. The remote, for example, is sprinkled with illogicality – the play button is separated from the other playback controls and doubles up as pause with no indication on the remote itself that this is the case. Neither is it made clear that the Stop button acts as open/close when you hold it down. There’s also no Mute button and the banks of small, homogenous buttons towards the bottom with abbreviated labels don’t help you find things in a hurry. That said, it’s well built and attractive – perfect coffee table fodder.

The report card for the onscreen displays also reads ‘could do better’. The in-playback displays, showing chapter, title and running time info, are also far too rudimentary for a product this pricey – the generic white text is better suited to a cheapo Chinese knock off. The setup menu is equally unpleasant, using ZX Spectrum-like graphics and a basic colour palette. The fact that it’s easy to use stops this being a deal-breaker but it does slightly erode the deck’s high-end aura.


But after witnessing the Primare in action with ”Apocalypto” on DVD, our faith is completely restored. Rigged up to a 1080p TV, it delivers wonderfully clean and evocative images, bursting with vivid-yet-natural colours, ocean-deep blacks and shedloads of crisply rendered detail. These qualities are clear to see in any of our test movie’s rainforest backdrops, with the textures of tree bark and tiny leaves looking wonderfully sharp, plus the screen is filled with rich, realistic browns and greens. Skin tones are perfectly pitched too, and the unit’s slick processing tracks Jaguar Paw’s movement with fluidity and focus during his heart-pounding chases through the rainforest.

It’s equally at home with the range of tests thrown up by the HQV DVD – it does a wonderful job of eliminating jaggies during the diagonal filter pattern, takes the flapping flag clip in its stride and renders fine detail (moving and still) with admirable acuity. All in all, this is a fine video performer.


Even more impressive is the DVDi10’s sound quality, which is no real surprise given the hi-fi pedigree behind it. ”Apocalypto’s” pounding DTS track is sparky and dynamic yet smooth on the ear. It attacks transients with plenty of bite, delivers top-end frequencies without straying into harshness, and relays the subtler background elements of the film’s sound design with no problem whatsoever. Through our Teufel Theater 3s it delivered a fast, transparent sound which delves down fairly deep even without a bass-bin connected, but for true cinematic clout make sure you employ that sub output.


The Primare’s music reproduction is a revelation, delivering a mature, finely-balanced rendition of ”Blue in Green” by Miles Davis. The sound is admirably neutral – a far cry from the crude cacophony offered by some one-box 2.1-channel systems – but it still retains that element of warmth needed to make this mellifluous masterpiece tweak the heart strings. Lovely stuff.


Although we initially baulked at the DVDi10’s eye-popping price tag, after spending time in its company we can now see and hear where your money’s going. The picture and sound quality on offer is nothing short of sensational, while the bulletproof build quality and sophisticated looks make it an eye-catching home cinema centrepiece. The bizarre operational idiosyncrasies, poor onscreen menus and lack of DivX support diminish the quality of the overall package and hardly put it at the cutting-edge of AV tech, but in terms of pure performance you certainly won’t be disappointed.