The Voyager 855 stands out from the crowd for two main reasons. First, unlike most standard models it can operate both as a standalone traditional mono headset and also as a pair of wireless stereo headphones when its secondary earpiece is attached. Second, it has a boom mic that you slide out from the main body of the headset to pull it closer to your mouth when you’re taking a call. 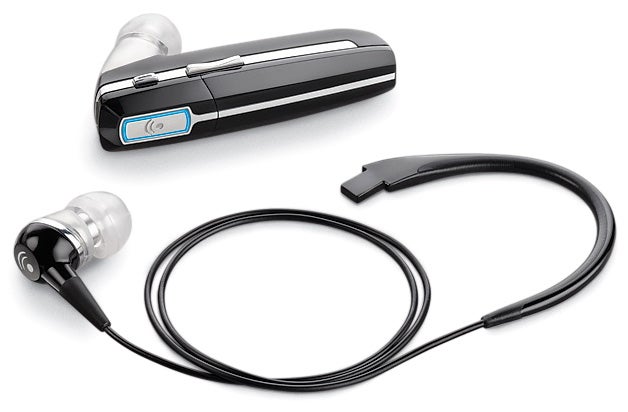 Design-wise, Plantronics has taken a very different approach to that of the Bluetrek Duo Stereo headset that we reviewed. To use the Bluetrek device in stereo mode, you had to attach a completely separate pair of headphones with the main headset then being reduced to the role of a simple Bluetooth transmitter and receiver. However, with the 855, switching from mono to stereo operation is simply a matter of connecting an extra earpiece via a short cable to a special socket on the inside edge of the main headset. It’s still a two part solution, but we think it’s a much neater and less fiddly design.


Without the extra earpiece attached there’s little to tell the Voyager 855 apart from most standard mono headsets as it has a fairly standard matt black finish with some silver trim around the edges. Thankfully it’s relatively light at 11g so you don’t feel like you’ve got a dumbbell hanging from your lug-hole when you’re wearing. And measuring approximately 1.6 x 1.3 x 5.7cm it’s also quite narrow and slim, but when the boom mic is pulled out this does add around 2cm to its overall length. 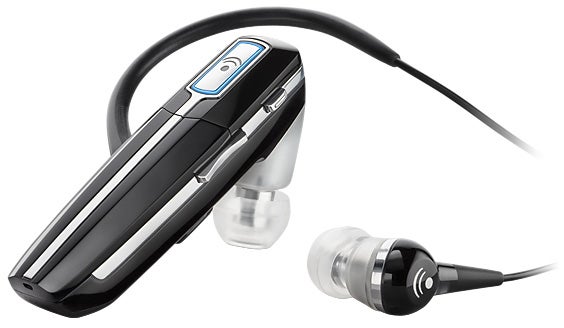 The boom mic part actually forms the majority of the body of the headset. Plantronics has added a couple of plastic grips to the side of it to help when you’re opening and closing it, but to be honest, the sliding action is so smooth that a little pull or tug on any part of the boom is enough to get it to open. The only small problem with the sliding design is that you can sometimes slightly dislodge the 855 from your ear when you operate it.


The 855 comes with three ear bud gels (small, medium and large) for both the headset and the extra stereo earpiece so you shouldn’t have any problems getting it to sit comfortably in your ear. However, all of these gels are designed to be used in combination with the headset’s ear hook so none of them are strong enough to hold the headset in place by themselves. 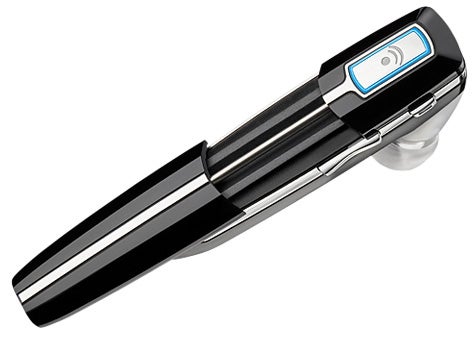 Paring the headset with your phone is easy as the 855 includes Plantronics quick pairing technology. All this means is that the first time you turn it on it automatically enters pairing mode. So to get it working with your handset all you have to do is turn on Bluetooth on your phone, do a search for a new device and enter the standard 0000 passcode. The headset also supports multipoint so it can be paired and active with more than one device at any one time. For example, it could be paired with your laptop to listen to music and your phone ready to take incoming calls.

As with pretty much all headsets, there are only minimal controls on offer. Alongside the multifunction call button there’s also a mute button and a volume rocker switch that also doubles up as a track skip control. The buttons are very small and as a result are quite fiddly to use. For example, it’s easy to end up increasing the volume level when you’re actually trying to lower it. Another issue is that as you have to press the call button quite hard to activate it, you’re also pushing the headset in towards your ear, which can be a tad uncomfortable. 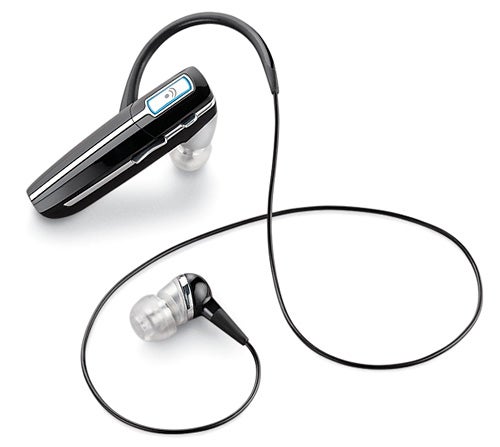 We tested the headset with the O2 XDA Zest and although call quality was generally pretty good, the headset’s boom mic does tend to pick up a fair amount of background noise. For example, when you’re outside in slightly windy conditions the person you’re calling will think you’re wandering through a full blown gale. This is a tad disappointing as we would have expected more considering the headset includes Plantronics’ AudioIQ noise-cancelling technology.


On the upside, music does sound great when you’ve got both earpieces attached. It produces meaty bass without sounding too boomy and its mid-range response is quite punchy. Overall, we’d describe it as very full-bodied and warm sounding. 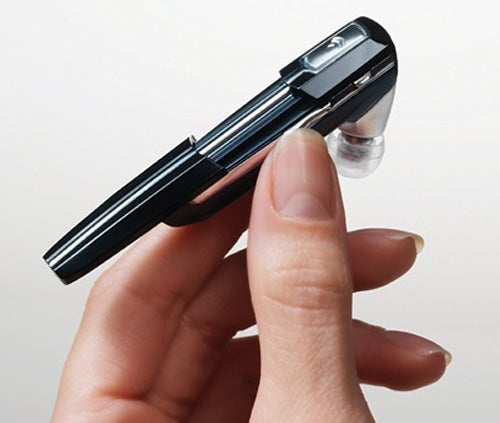 Thankfully battery life isn’t too shabby either. Plantronics claims that the headset is good for seven hours of talk-time and up to six hours of music listening. These figures rang pretty much true during our test period. We got six and a half hours of talk time and five hours for music listening, which is not too bad.


Charging is carried out via the microUSB socket on the rear and Plantronics includes a standard wall charger in the box. A full charge takes around three hours and during the charging period the LED glows red. Once this turns off you know it’s fully charged. There’s no dedicated battery indicator on the headset, but if you press and hold the call control and volume down buttons simultaneously for two seconds the LED will blink to indicate the current battery level. One blink means its two-thirds full, three blinks means it’s between a third and two-thirds full and three blinks indicates less than a third of the battery life remains.


We wish the noise-cancelling technology was a bit better, but on the whole the Voyager 855 is a classy dual function headset with good all round performance. If you want a single headset for taking calls and listening to music, it’s one of the best options around at the moment.