What is the Plantronics Rig Surround?

The Plantronics Rig Surround aims to be the ultimate all-rounder headset, combining gaming-friendly features such as a desktop amplifier and 7.1 virtual surround with more on-the-go touches like foldable earcups and a modular cable design.

The Rig Surround consists of two main components: the USB sound card/amp and the headset itself.

Starting with the headset, we actually really like the design. Its simple matt black finish, with just the odd splash of bright orange, makes it look classy and understated but with just a hint of fun. The build is all plastic, but it feels reasonably robust and through simple design touches it manages to still look the part. 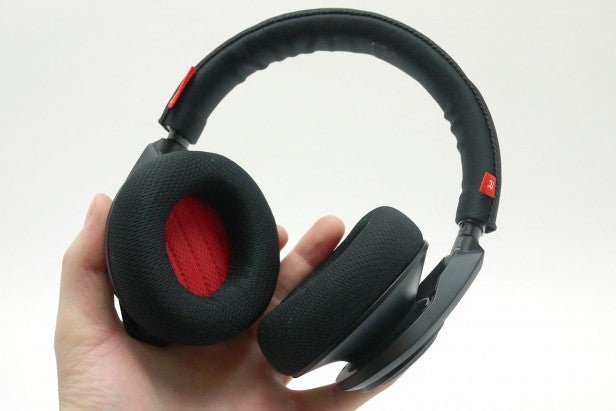 One of the particularly nice flourishes is the little patch of plastic fabric on the back of the earcups. It serves no practical purpose, but it feels good and is a nice finishing touch to the design.

Features wise the headset is pretty basic. The earcup mounts rotate through 90 degrees to fold flat for slightly easier transportation (although we’ve always wondered who actually finds this beneficial without a case to put them in). The earcups themselves also tilt up and down a little to adjust for different head shapes.

The headband offers a decent amount of adjustment, with about an inch and a half of movement in each arm. It’s finished in the same plastic fabric on its outer surface as the back of the earcups, while a finer-weave version is used on the inside. 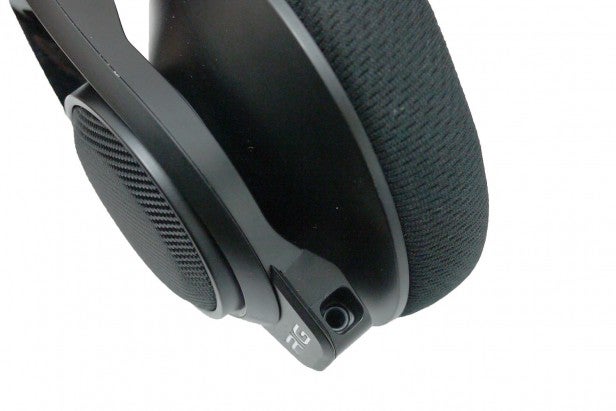 The Plantronics Rig uses a single standard 3.5mm audio jack on the left earcup – although it’s quite recessed, so if you lose the original cable it may take a bit of searching to find another one that fits.

Annoyingly Plantronics hasn’t included the additional mobile phone cable that’s included with the non-Surround Rig. This includes an inline microphone for use with your phone while out and about. Instead you just get the at-home one, which incorporates a boom mic and then stretches out another 1.5m. The boom mic is flexible, but offers essentially no adjustment, with it just springing back to its starting position. In fairness, though, we did find it sat pretty much exactly where we’d want it. 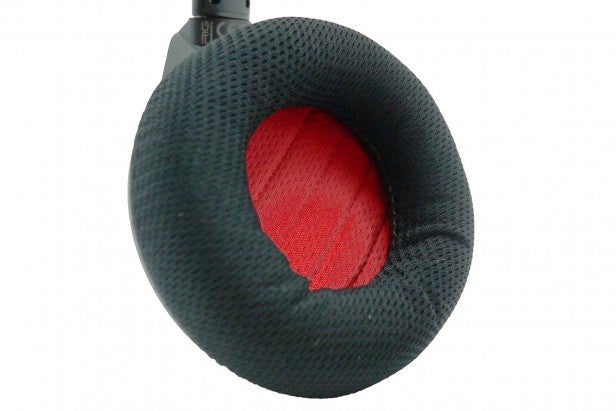 In terms of comfort and fit, this is a circumaural (or over-ear) headset, so the earpads go around the ears, and thanks to ample padding and a lovely soft finish they fit very nicely indeed. The earcups are perhaps a little small, though, as our not-especially-large ears only just fit inside the padding – this is something that’s not helped by the fact that they’re round rather than oval.

The headset is nice and lightweight, but through a combination of a lack of headband padding – there’s a tiny bit but it’s hardly worth it – and a slightly loose fit, which means the headset can’t rely solely on the earcups to support it, the top of the head does get a little sore after around an hour’s use. Far from a bad performance, but not class-leading comfort either.

That loose fit means this isn’t a very secure headset either – a good shake of the head has it coming loose, though it never actually fell off in our testing.

The other main component of the Plantronics Rig is its USB soundcard/amplifier. This device plugs into your computer via a tethered USB cable and then does all the audio duties for you, with no need for an onboard soundcard.

It also incorporates another cable, which is for attaching your phone or other audio source, so you can mix it with your computer’s audio. We actually would’ve preferred this not to be tethered – if you’re not using a second sound source, it just gets in the way. These connections trail from the back of the unit, while at the front is where the headset cable plugs in using a standard 3.5mm jack socket.

The unit is about the same shape and size as an ice hockey puck. There’s a reasonable heft to it and three grippy rubber pads mean it doesn’t slide around too easily, which is always a concern with desktop devices like this. 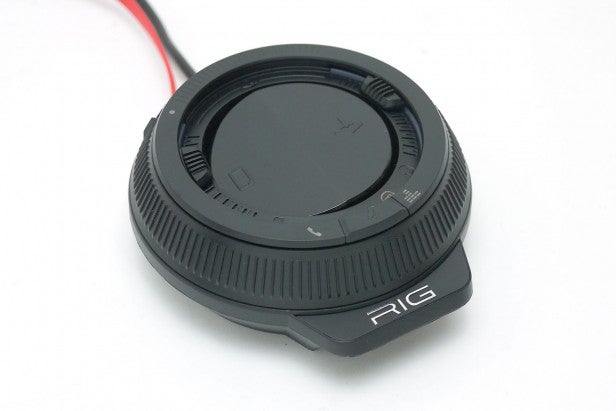 In terms of controls, the whole outer edge is one large volume control that also doubles as the power switch, while inside you have two further rings of controls and a central circular switch. The central switch is for alternating between the phone microphone and in-game microphone.

Finally, the outer ring has three buttons for answering a call, muting your mic, and also either switching between 7.1 virtual surround and stereo audio modes or between the three EQ profiles – Pure, Seismic and Intensity. You hold it down for surround, or tap for EQ.

It’s a comprehensive selection of functions, and thankfully it doesn’t take long to become familiar with how to use them all.

Initial setup is fairly straightforward too, although as Plantronics is at pains to point out, you must install the driver before plugging in the hockey puck.

Also, it’s a little confusing exactly how you set the software up, as the headset appears as both a headset and as speakers in the Windows speaker playback options. You have to select the speakers to get it working properly.

Sound quality is decent. As is nearly always the case with gaming headsets bass is quite prominent but it’s far better controlled than many rivals and it’s accompanied by plenty of detail in other areas too.

Most obviously the high-end has plenty of sparkle which contributes to a surprisingly good sound stage. Instruments standout both sonically and positionally, creating a satisfyingly immersive effect.

However, that treble detail comes partially thanks to a boost in those frequencies, leaving the mid-range set back in the mix. This leaves vocals in particular sounding a little lost and takes a certain warmth away from string instruments.

Exacerbating the issue is that the two alternate tone options only boost these already amped parts of the sound. The Seismic mode cranks up just the bass while Intensity boosts both bass and treble, and both sound positively ridiculous.

As mentioned, though, the default sound is still decent and in terms of detail and composure it’s about on the money for the price. 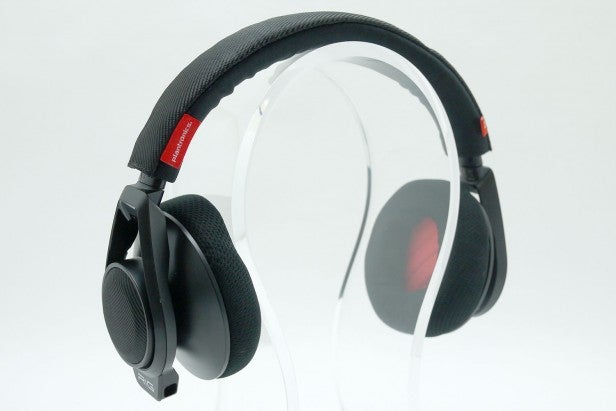 Of course the other aspect to this headset is its surround sound mode and as we’ve come to expect of Dolby Headphones technology it works very well. It’s not so much that you absolutely feel like you’re surrounded by sound but that everything feels more like it’s coming from the right place. This is particularly effective in games where it allows you to far more accurately track where a sound has come from and what your position is in the world.

Plantronic’s effort is no better than any other we’ve used but the overall detail production and soundstage of the headset means it has more to work with in the first place.

Ditching the amp and hooking up directly to a phone, the headphones do a decent job with their low impedence meaning they don’t need an amp and all that detail still comes through nicely. Noise dampening isn’t all that great though. The earcups are closed back but for whatever reason sound is hardly attenuated.

Should I buy the Plantronics Rig Surround?

Overall we rather like the Plantronics Rig Surround. Its stylish, mostly comfortable and very versatile. As well as being well suited to doubling as a pair of headphones the included USB controller is a really useful way of mixing and managing your various sound sources.

What’s more sound quality is a clear step up from your average gaming headset. Yes the sound is still a bit scooped but the overall detail levels are a cut above. Plus the virtual surround works very well.

However, it’s definitely not perfect. Long term comfort is let down by a lack of padding on the headband, noise isolation is poor, the tethered second audio cable gets in the way and you don’t get a spare mobile phone cable in the box like on the non-surround version of the Rig. None of these issues are likely to be deal breakers but they add up to take the shine off just a little.

The Plantronics Rig is a great headset that, because of its included USB amplifier, is a versatile one too, suitable at home and on the move. However, a few little grumbles mean it isn’t quite a resounding success, though still well worth considering.