What is the Plantronics BackBeat PRO?

The BackBeat PRO is Plantronics’ attempt at the ultimate premium wireless headphones. Connecting via Bluetooth, they also feature NFC for easy syncing and have active noise cancelling for those moments when you just want to block out the outside world. 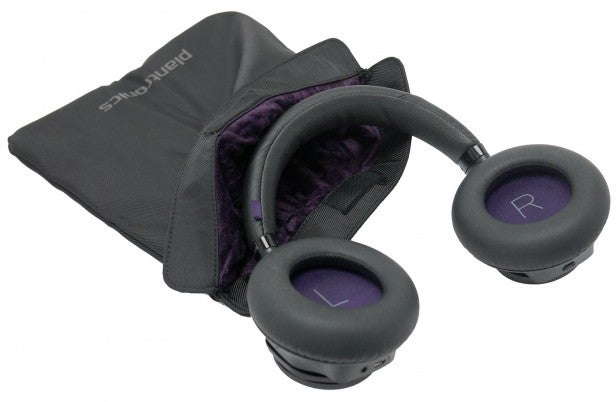 This is one feature-packed set of headphones. Look closely at the two earcups and you’ll see they’re festooned with buttons, dials and switches. Thankfully they’re mostly fairly well hidden and don’t disrupt the styling too much, but inevitably they do look a little busy, with the Play/Pause and Call buttons on the outer faces of the earcups looking rather naff.

Otherwise they look pretty decent, in a muted sort of way. Black plastic joins black faux leather with a little hint of purple from the earcup linings and a flash of metal from the headband and microphone grilles on the backs of the earcups.

Perhaps more than them being out-and-out stylish is that they instantly come across as a quality product, thanks to top-notch build quality. There’s a real robustness to them and they’re finished very nicely indeed, with no hint of a misaligned joint or sharp edge. This does add up to them being a little on the heavy side, though. At 340g they’re 80g heavier than the Beats Studio Wireless. 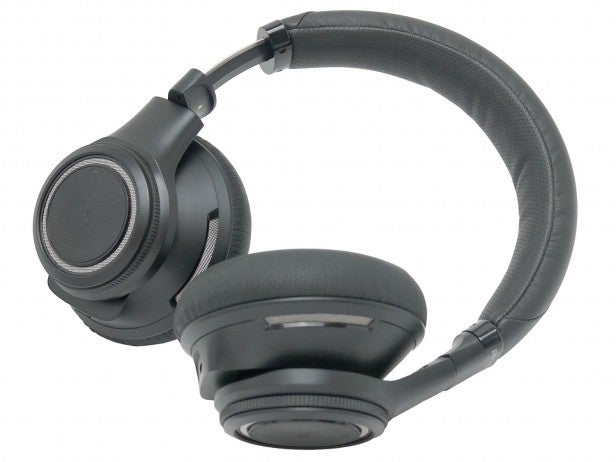 Although billed as wireless, the BackBeat PRO can be hooked up directly to an analogue audio source through a 3.5mm jack socket on the left earcup. Plantronics includes a mobile phone cable in the box for just this purpose, and it includes volume (Apple devices only) and Play/Pause/Answer/End (Android and Apple) functionality, along with a microphone.

Particularly nice is that the headphones work properly – including mobile phone control via the cable – even when turned off, so you can always fall back on using the old-fashioned wired method if the batteries run out. It’s just that none of the on-headphone buttons, nor the noise-cancelling, will work.

If you do want to go wireless, you’ll need to flip the power switch, which is situated just behind the right earcup where it falls to hand reasonably easily. Meanwhile getting some juice onboard is done via a micro-USB socket.

Around the face of the right earcup is a ring of rubber that functions as the volume control. This is easy to reach and adjusts nice and accurately. Volume can be altered whenever the headphones have power and are turned on, even if you’re just hooked up through the cable, but it doesn’t work if running without power. 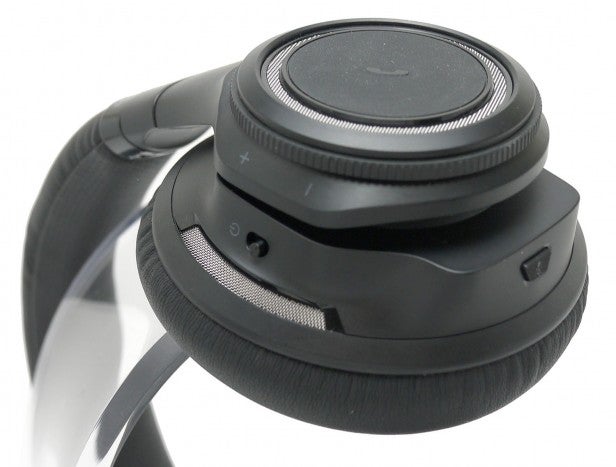 In the centre of the earcup is the Call button for answering and ending calls, while below it is the OpenMic button. This is for quickly muting your audio and engaging the microphones so that you can have a conversation without having to remove your headphones.

This is a neat feature that’s used on in-ear headphones – particularly custom-moulded ones – which are more of a hassle to remove, but here it does seem a little superfluous. After all, it’s no hassle to simply slide your headphones off for a moment. But it works very well, nevertheless. 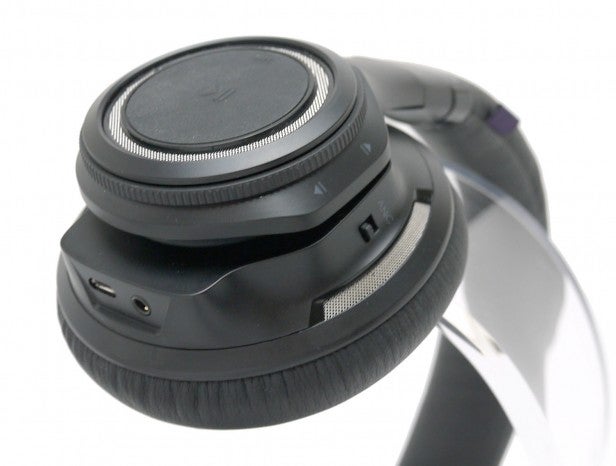 Moving over to the left earcup, the outer face this time hosts the Play/Pause button, while the surrounding rubber ring is for skipping tracks. To the rear is the control for turning on the active noise cancelling (ANC) that, as with all such systems, uses microphones in the earcups to listen to outside noise, so that it can then cancel it out with the headphone speakers. We’ll talk about how well it works a little later.

To connect to the headphones you can either just search them out using the Bluetooth facility of your phone, tablet or laptop, or if your device supports it you can also use NFC to get them talking. Just tap your phone’s NFC sensor to the left earcup and within a couple of seconds they’ll be set up.

As mentioned earlier, the earcups of the BackBeat PRO are relatively small for an over-ear design. This means that for any but the smallest ears the padding won’t quite fully envelope your ear, but will instead catch some of your ear lobe.

The padding itself is also fairly shallow, so your ears do press against the fabric covering the drivers. What’s more, the limited earcup-mount adjustment means that the earcups don’t press evenly against the side of the head, with them angling in more at the bottom and less at the top.

The overall result is that comfort is only okay. The padding itself is lovely and soft, but your ears are still a bit squashed and yet the headphones aren’t that secure thanks to the uneven pressure. This also means the headband needs to take quite a lot of the strain, and thankfully it has lovely soft padding, too. However, it’s still taking such a weight that the top of the head becomes a little sore after around an hour.

The slightly loose grip and fairly high weight of these headphones means they’re a little more prone to shifting around. They likely won’t actually fall off, but they definitely don’t feel overly secure.

Noise isolation is good. The soft padding and faux-leather finish provides a good seal which, coupled with the closed-back design, means outside noise is reduced a little. 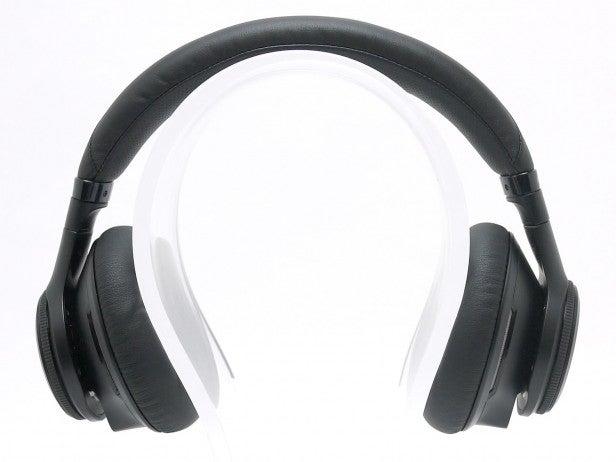 Activate the ANC and of course this ramps up to another level. It’s very effective at taking out lower frequency rumbles, which is great for reducing the general din of traffic. In fact it works well in conjunction with the passive noise isolation of simply wearing the headphones, which tends to filter out higher frequencies but have less effect on lower rumbles. The result is a fairly even drop in noise across the range, which is nice as it means what noise does leak through sounds natural.

We measured the noise level of the music we were listening to was around 46dB and the noise reduction system reduced it to just barely audible.

The OpenMic feature likewise does a great job. Everything does sound a bit odd but it’s certainly good enough to make conversation and the volume levels seem well matched to the natural volume of external noise. 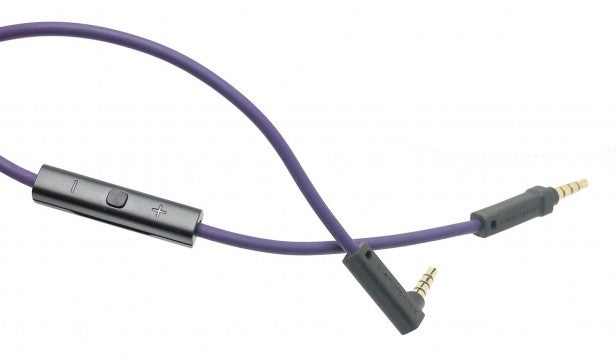 The BackBeat PROs sound great. Not perfect but really really enjoyably good. With plenty of bass yet lots of detail, they’re versatile and fun at the same time.

Starting with that bass, it hits very hard, blasting out kick drums and sub-bass lines and giving energetic music real drive and force. It’s sure to put a grin on the faces of anyone who likes a bit of oomph from their headphones.

What makes these headphones have even wider appeal, though, is that they also deliver warmth and detail in the mid-range, making them still well suited to guitar and vocal-driven music. The bass feels slightly better integrated than many bass-boosted headphones, too, giving a smoother feel to most listening experiences.

High-end detail is also decent, though not outstanding, with it trailing off at the uppermost frequencies. That final airy sparkle that the best headphones possess isn’t quite here. This impacts the sound stage, making for a fairly closed-in listening experience.

Overall, though, the sound is almost perfectly suited to enjoyable, varied listening when out and about. Yes, you’re not going to hear every last sparkling treble detail, but at least you’ll be able to enjoy your favourite tunes above the din of an underground carriage.

Turning on the active noise cancelling does reduce overall sound quality, though, as the headphones are inevitably having to mess around with the sound signal to block out the external noise, but largely it holds up well.

To get the best from these headphones you’ll actually want to just connect directly to them via the supplied cable rather than using wireless – assuming your sound source has a decent output, of course. We experienced a more even tone with slightly better integrated bass and greater high-end detail, taking what was already a great listening experience to another level.

As for battery life, Plantronics is particularly proud of the BackBeat PRO’s claimed 24 hours of listening with noise cancelling – 60 hours without – and sure enough they achieved that lofty figure, delivering just over in our tests. That compares to just 12 and 20 hours for the Beats Studio Wireless.

The battery isn’t removable, though, which is always a shame. Not only does this mean you can’t replace it if it fails, but you also can’t buy spares for when you run out and aren’t near a charger. Still, this is common now and with a charge time of only three hours you shouldn’t ever be too long without your tunes. 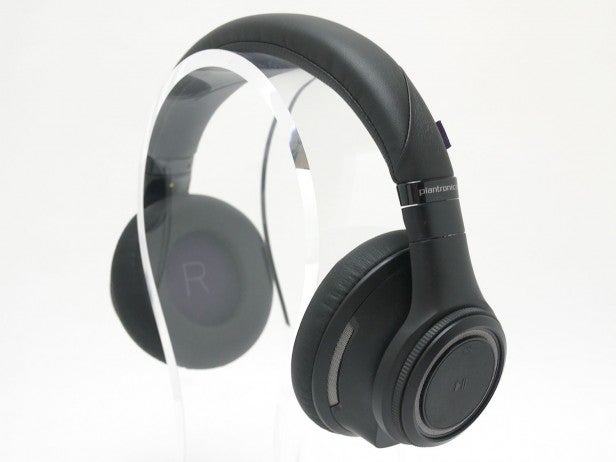 Should I buy the Plantronics BackBeat PRO?

The Plantronics BackBeat PRO is a superb set of portable, wireless over-ear headphones that will be a great choice for a whole host of people.

The headline feature is an impressive 24-hour battery life that stretches to 60 hours without noise cancelling, making these among the longest-lasting headphones in their class. Plus they can fall back to normal passive use when that battery finally runs out.

Although not class leading, their noise cancelling is impressive, too, and coupled with sound quality that surpasses most noise-cancelling rivals.

The sound signature is a bit bass-heavy, which may put off a few people, but thanks to impressive mid-range and high-end detail they’re far more balanced than many alternatives.

The only thing that really lets the side down, then, is middling comfort levels. A lack of padding on the earcups and a slightly odd fit mean they trail many over-ear alternatives, though they’re still more comfortable than on-ear competitors.

Great sound quality, impressive noise cancelling, class-leading battery life and a host of easy-to-use controls make these headphones some of the best, if not the most comfortable.