Think back to all the head-scratching and beard tugging that surrounded the DS launch – what’s the point of two screens? Why the stylus controls? Shouldn’t there be more 3D horsepower? – and it now seems so obvious that Nintendo’s vision was absolutely spot on. While Sony seemed hell-bent on recreating the home console experience in a mobile format, Nintendo had its sights on the wider market, and through a string of polished, mainstream-friendly titles, it has succeeded in taking games to people who would never have bothered with them before. 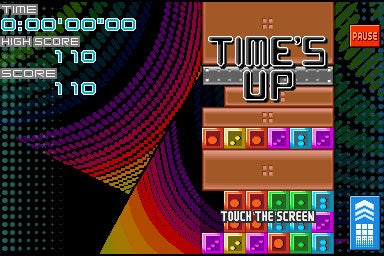 I’m not certain whether this was always the plan or whether it is something that has just evolved with time, but it’s an approach crystallised in Nintendo’s Touch Generation series of titles. From Brain Training to Nintendogs to 42 All Time Classics, these are games that strike a chord with people looking for a little casual fun, and which fit into lives too busy for the sort of long periods of dedicated gameplay that more hardcore games demand. On the face of it, the new game from Advance Wars developer Intelligent Systems fits this mould perfectly. But be warned: while you can play it in little chunks, or restrict yourself to the Daily Play mode, Planet Puzzle League is one of the most addictive ‘casual’ titles I’ve ever had the misfortune to come across. It’s so simple that anyone can pick it up, but it takes an immense act of will to put it down. 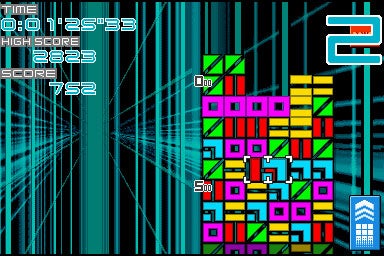 On the face of it, PPL is just another block puzzle game, and one not a million miles away from Zookeeper, Meteos or last year’s Pokemon Link. In the most basic mode, you have a screen that slowly fills with coloured blocks from the bottom. Using the stylus, you select and drag blocks across the row, attempting to connect a line, horizontally or vertically. Link three or four together, and the blocks disappear. Cause chains (one link leads to another) or combos (where two lines disappear at once) and you get more points, and you can also form ‘active chains’ by moving a block while others are vanishing, so creating another link. Your aim is generally to get the highest score possible, and if the pile of blocks hits the top of the screen, it’s game over. I know what you’re thinking – seen it, done it, got the T-Shirt – but wait. There’s more to PPL than just another clone. 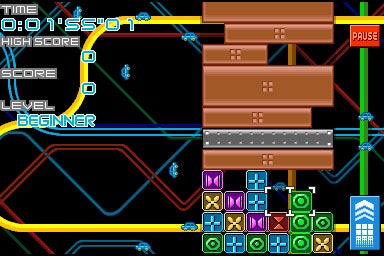 For a start, it’s jammed with play modes. The single-player mode alone gives you seven options, including the straight ‘endless’ mode, a series of ‘clear mode’ challenge levels where you have to clear all the blocks above a line, a two minute ‘time attack’ mode and a series of puzzle stages. For added trickiness, you can play ‘garbage mode’, where solid blocks fall from the top of the screen, only turning into linkable colour blocks when in contact with a newly made link or chain. If you want competition, you can play a two-player game against the computer, and this takes the form of a ‘time attack’ or line-clearing battle, or a ‘garbage battle’ where making blocks disappear in your stage makes blocks appear in your computer opponent’s. There’s also a daily mode, where you play three games daily and the game tracks your scores on a graph. 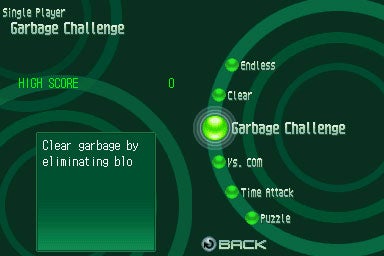 Needless to say, the game throws wireless play on top. Four players can compete using a single cartridge in score attack, clear mode or garbage battles. The latter proves particularly fast and furious, as garbage is sent to all opponents. Finally, it’s also possible to duel with online rivals over the Nintendo Wi-Fi Connection. Beginners can take on other beginners in a restricted mode especially for them (the game refuses access once you have achieved certain conditions within the single-player mode), it’s all against all in the Free Play Battle mode, friends can play friends using the now familiar friends code system, and – bizarrely – you can play ranked matches against other players who share the same birthday. 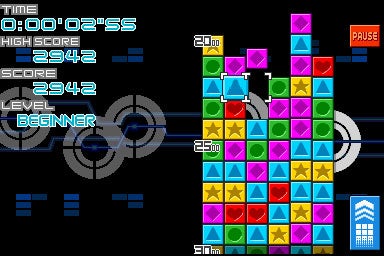 Now all the content and play modes in the world wouldn’t matter if PPL didn’t play well, but the fact is that it’s an almost perfectly constructed puzzle game. Playing single-player, it seems at first that just surviving for a reasonable time will net you a decent score, but the fact is that the game picks up so much speed by the time you hit the fifteen minute mark that you won’t have a hope. Instead, the skill is in maximising your time, lining up the blocks as rapidly as possible, while still thinking far enough ahead to build higher-scoring chains and combos. As a result, it’s a game that demands quick reflexes and long-term strategy, plus the sort of mysterious intuition that you can only build through longer periods of play. I thought I was getting good, but then I watched my wife play. She’d been sneakily playing PPL on the quiet for the last week or so, and watching her construct chains and combos with frankly nauseating speed and precision showed me that I wasn’t even close to mastering the game.

This not only made sense of my better half’s frequent disappearances during the past week, it also made me suspicious that the single-player game was ludicrously addictive. And so has turned out to be the case. Last night, a disastrous period of ‘just one more go’ caused me to miss the first half hour of House MD (a programme I’d normally cross hell and high water to see) and then a relapse kept me going from the minute House finished to nearly 1am. I can also report that it’s the sort of game that then infests your dreams: a feat previously only managed by the likes of Tetris and the original Doom. 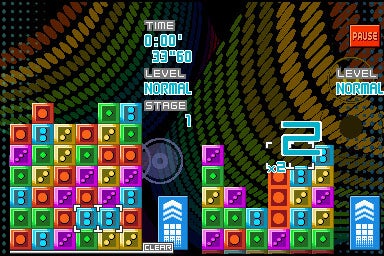 If it’s compulsive in single-player mode, PPL is fiercely competitive in multiplayer. I’ve been humiliated in ‘score attack’ at home, and internationally through the magic of the NWC, and yet I’m still coming back for me. Once again, Nintendo’s service proves that matchmaking and game setup don’t have to be nearly as difficult as most online games make them, and I find that the lack of voice in anonymous matches (you can enable it for friends games) helps soften the sting of crushing defeat.


Yet I don’t think Intelligent Systems’ real achievement lies in merely making such a superb puzzle game, but in making one that you’d swear the DS was built for, and one that’s designed with the widest possible audience in mind. The fact that you play holding the DS like a book, Brain Training-style, makes perfect sense given the vertical structure of the play area, and it’s hard to think of another puzzle game that uses the touch-screen quite so well. Anyone from a five-year-old to your gran could pick it up in a matter of minutes, and as you play the controls just seem to melt away in a smooth flow of rapid drag and drop manoeuvres. What’s more, you get a choice of ten different visual themes and soundtracks; all clean and stylish, but embracing different feels from a techno-style soundtrack with neon blocks to cheery symbols and a breezy, easy listening tune. While the cutesy graphics of Pokemon Link or Zookeeper doubtless put some players off, it’s hard to imagine anyone finding none of the options here to their taste. I can just imagine Nicole Kidman playing it now… 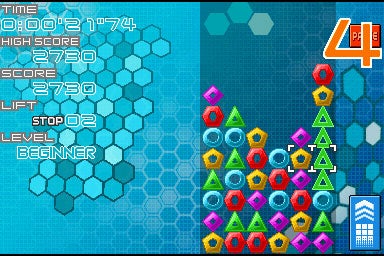 Some people might see this kind of game as a watering down of existing styles for mass-market tastes, but if Nintendo’s inclusivity keeps producing games this good at such bargain-basement prices then I’m all for it. For all that it’s just another puzzle game, Planet Puzzle League is still one of the most substantial puzzle game packages I’ve ever come across and it’s comfortably up there with Lumines as a high water mark of the genre. For £20 or less, it’s an absolute steal.


A new titan of the puzzle game genre, Planet Puzzle League is everything that’s good about the DS. It’s accessible, beautifully presented and totally addictive.