Since it first hit the UK custom install world in the summer of 2007, US brand Planar has been busy doing a very nice job of keeping our jaws hanging open at its generally pretty spectacular LCD TVs and projectors. So as we strain to heave Planar’s huge, promisingly heavy PD8130 out of its box and onto our overworked projection stand we can’t help but feel a tingle of excitement. Especially as the PD8130 sits so high up Planar’s current range, nestling just below the current PD8150 flagship – a model we adored in an earlier review.


Although the PD8130 really is big, pretty much filling my arms as I carry it around – and I’m not exactly small! – it wears its bulk surprisingly well. This is thanks to a high-gloss piano black finish and an unusual design that would be almost circular were it not for a detachable connections cover making its rear taper out like the back of Darth Vader’s helmet.


A lot of practical thought has gone into this apparently ‘fun’ design, too. For instance, the cabinet limits stray light output to less than 50% of the brightness of projected black, features built-in sound dampeners and shock-mounted components, uses oversized fans for reduced noise levels, and angles the side vents so that any hot air is directed away from where you’re sitting. 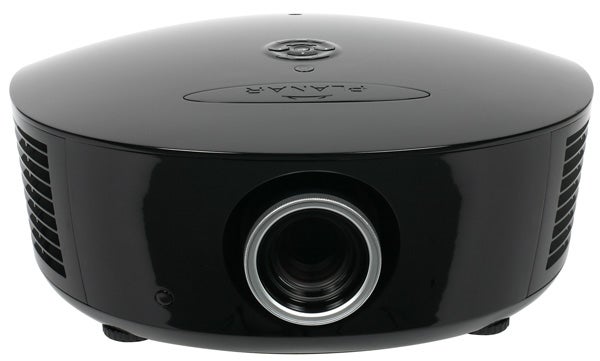 We guess some people might take issue with the slightly plasticky feel of the PD8130’s finish, and the marginally awkward way the lens juts out of the projector’s front. But for us, weirdly, both these factors actually contribute to its distinctively quirky charm.


Once you’ve screwed off the PD8130’s connections cover, you find yourself faced with a solid set of connections. These comprise on the video side two v1.3 HDMIs, a component video port, a D-Sub PC port, an S-Video port, and a phono composite jack. To support its custom install focus, meanwhile, you get an RS-232 D-Sub control jack, a 3.5mm mono emitter input, and a 12V screen trigger.


Setting the PD8130 up is, perhaps, not as easy as it could be. For starters, while you can shift the image vertically, unlike the PD8150 the PD8130 doesn’t provide any horizontal image shifting – something which clearly limits the PD8130’s positioning relative to your screen.


There’s no keystone correction in the PD8130’s menus either. But then projection purists of the sort most likely to be interested in the PD8130 would doubtless argue – with some merit! – that digital keystone electronically manipulates the image, and so should be avoided at all costs.


I found it rather unhelpful and low-tech, however, that vertically shifting the lens requires you to use a supplied hex wrench to turn a screw underneath a pop-off cover on the projector’s top. We guess this approach is more robust and precise than just using some sort of easily turnable wheel knob, but, well, I’d probably have preferred the wheel option anyway…

Before we get too caught up in any negativity regarding setup, though, let’s not forget that the PD8130 is designed to be part of a custom installation, and so hopefully some cheerful professional chap will be sorting out any issues for you.


What’s more, there are plus points to setting the projector up, too. For instance, a decent amount of optical zoom in the all-glass precision lens at least makes it possible to use the projector in quite a variety of room sizes. There’s even a separate short-throw lens option available if you need it.


Also, the onscreen menus are actually quite thoughtfully designed once you’ve taken a deep breath and decided not to be overwhelmed by hefty amounts of text they throw up at any one time.


I also got some mileage out of the projector’s 11 built-in test patterns – though it’s important to stress that unlike many projectors, the PD8130 appears to have been superbly calibrated before leaving the factory. Even the projector’s colour tone seems more or less completely spot on without us having to lift a finger. Marvellous. 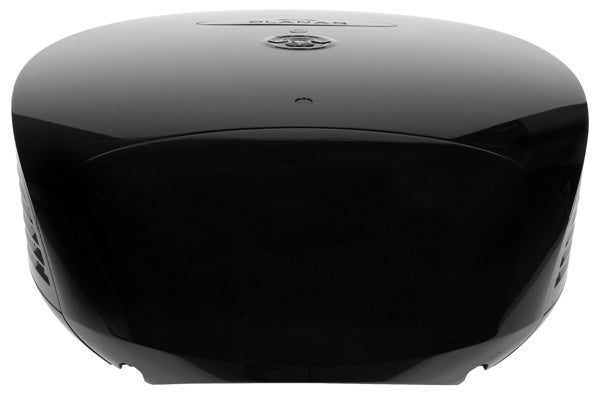 It’s possible some of our readers will bemoan the lack of any thematic (cinema, sports, game etc) presets in the PD8130’s menus. But again, this is all part of its custom install ethic, for instead of presets defined at source by Planar the projector carries three memory slots where a good installer can store different image setting combinations to suit not only different sources but also the specific conditions of your living room.


In fact, the projector is fully prepped for professional calibration by an Imaging Science Foundation engineer – complete with night and day settings – if that’s the route you decide to go.


As with the PD8150, the PD8130 is prodigiously well featured. To kick things off, its Full HD DLP chipset is driven by a customised version of processing from acclaimed third-party expert Gennum – a processing source I’ve never seen fail before.


The PD8130’s contrast ratio, meanwhile, is claimed to be 10,000:1, achieved with the help of DLP’s intriguing DynamicBlack technology. This increases the electronic gain of an incoming image, so that it uses the full dynamic range of the DMD device at the projector’s heart, with an optical aperture then reducing the image back to the correct brightness level before putting out to your screen. The result is that the enhanced dynamic range created by increasing the gain remains, while black levels are improved by the aperture effect.


Also on board the PD8130 is Texas Instruments’ Brilliant Colour processing, designed to boost colour brightness, with other bits and bobs including low and high lamp modes, resize modes for 2.35:1 anamorphic lenses to use, no less than 16 HD video timings (including 1080p/24, of course), four separate noise reduction controls, a sealed optical system (so you don’t need to worry about filters), and low and high lamp output modes.

If you’re wondering at this point if the lack of horizontal image shifting is the only area where the PD8130 differs from the £1,000 dearer PD8150, the PD8150 actually also has a slightly greater vertical image shifting range and, far more significantly, a 50% higher contrast ratio of 15,000:1


Perhaps because of this latter fact, my very earliest impressions of the PD8130 were that it didn’t excite me quite as much as I expected it would. But the longer I spent with it, the more ludicrous – not to mention shallow – those first impressions started to look.


Basically it gradually dawned on me that the things initially causing me to feel slightly hesitant were that the PD8130’s black levels weren’t as profoundly deep as those of the PD8150, while its sharpness initially didn’t appear to rival the Sony VW80 SXRD projector model I’ve been looking at recently. And the truth is that making such comparisons is as incorrect as it is pointless. 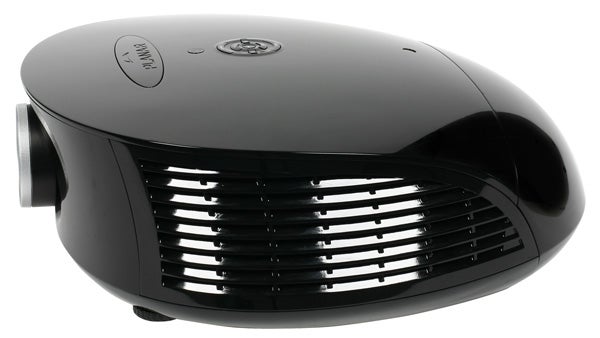 For instance, regarding black level, it’s hardly surprising the PD8150’s dark scenes look slightly better. That’s why it costs a whole £1000 more. Put the PD8130 more fairly in the context of its £3,500 price, and its black levels are actually pretty imperious in terms of both their depth and their stability.


As for SXRD’s apparent extra sharpness with HD, that technology uses a very small-pitched direct panel technology instead of DLP’s reflective technology, which naturally helps it stress the sharpness in its images. But the PD8130’s other image characteristics arguably make the still immense amount of detail in its images look somehow more cinematic and more an organic part of the image quality as a whole, rather than some kid of ‘stand out’ talent.


Running in tandem with the two ‘grower’ talents we’ve just described is a far more immediate talent of the PD8130: its terrific colour rendition. Rich saturations combine with aggressive but remarkably natural tones to blisteringly dynamic effect, driving images off my screen with impressive intensity.

Other hugely positive points about the PD8130 are that its motion is fantastically clean, with neither blurring nor DLP’s once-common fizzing noise to mess it up; its standard definition upscaling is one of the best around; colour blends are pretty much perfect, with no ‘striping’ problems; noise such as grain or dot crawl is only present if it’s already there in the source; and finally and perhaps best of all, the projector keeps a phenomenally tight rein on DLP’s notorious rainbow effect. 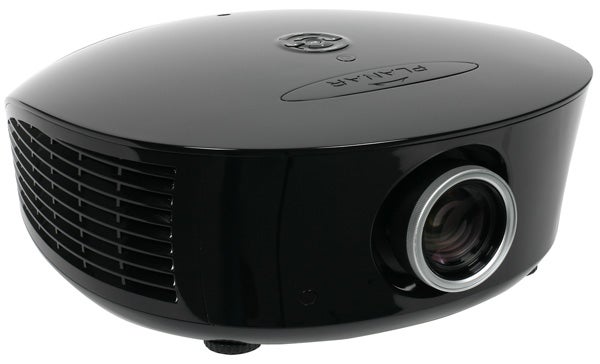 The only time I really noticed rainbowing at all during my tests was over white-text-on-black credit sequences and during camera pans where the image flashing by happened to have some very high-contrast edges within it. None of which strikes me as remotely a big deal when set beside all the good things DLP technology appears to be bringing to the party.


In fact, once my foolish initial misgivings had finally given way to the rightful appreciation of the PD8130’s beautifully judged combination of dynamism and subtlety, I was left really struggling to find anything properly bad to say about it. I guess it could perhaps run slightly more quietly, and I’d avoid the BrilliantColour mode, as it tends to emphasise noise. But that’s it.


In an ideal world, the PD8130 would suffer no rainbowing at all. And its black levels would be unbelievably deep. And its HD images might look so sharp you could cut glass with them while still retaining their cinematic feel. And it would run a bit more quietly.


But then that same ideal world would also include trees that grew chocolate bars, no mortgages, teleportation, 50 weeks of holiday a year and babies that changed their own nappies and slept for 12 hours a night from birth.


In other words, in the context of anything approaching reality, the PD8130 is yet another startlingly good product from Planar – and one that’s got us drooling like a thirsty dog at the prospect of its upcoming ‘Viper’ DLP three-chipper.