If you haven’t heard of Planar before, don’t worry; it’s not one of those fly-by-night dodgy Far Eastern brands that turns out some cheap piece of tat and then disappears again as fast as it arrived. In fact, Planar is a very well established brand in the US, and now it’s decided it wants to get itself known over in the UK too.


Regular readers may recall that the 42in PD420 is not the first Planar product we’ve reviewed. We’ve previously checked out and been very impressed by a couple of entry-level DLP projectors and one of the PD420’s bigger siblings, the 47in PD470. But with its approachable £1,800 price tag and living room friendly dimensions, it somehow feels as if the 42in PD420 could really be the product that puts Planar on the UK consumer map.


That said, the PD420 isn’t exactly designed for the mass market, for it ships with neither a built-in tuner – digital or analogue – or speakers included as standard. In other words, it’s ‘merely’ a screen rather than a fully fledged TV. 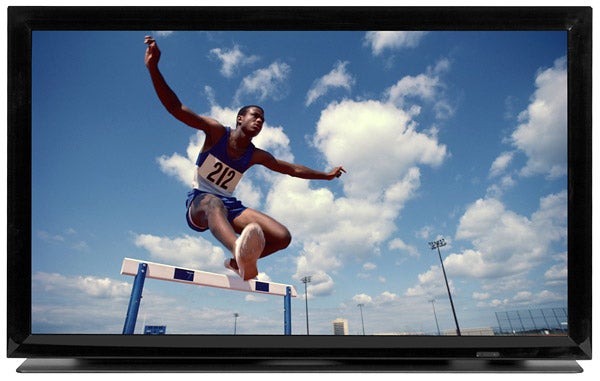 The reason Planar has taken this rather unusual approach is that it has designed the PD420 to be sold through custom installation channels rather than your common and garden high street electrical superstores. And when you’re talking about custom installations, you’re invariably talking about being able to feed screens with high quality external video sources such as a Sky HD receiver and/or Blu-ray deck. So a built-in tuner for receiving the Freeview service just isn’t necessary. Similarly, any professional AV installation worth its salt will have a separate audio system too, making speakers on the PD420 a complete waste of time and space.


So far, so hardcore AV. And this feeling merely grows when you clap eyes on the PD420’s bodywork, which is designed to what’s probably best described as an industrial standard. Its bezel is just a black rectangle, basically. But crucially for the set’s premium aspirations, it’s a black rectangle that happens to be made of diamond-polished, brushed aluminium and finished with five coats of highest-grade black lacquer topped off by one final automotive-grade clear coat. The screen itself is a cut above the norm too, featuring as it does a hard-coated, anti-glare surface. As I said before: hardcore.


The PD420’s premium status does take a slight dent, though, with the fact that its connections only include two HDMIs, neither of which are built to the v1.3 specification. We guess the number of HDMIs can just about be excused again by the screen’s custom install background, as a full installation may well use external source switching anyway, say through an AV receiver. But the lack of v1.3 spec definitely means the screen won’t be compatible with sources (should any AV examples actually appear!) that carry the Deep Colour format.

At least the set satisfies every other connection need most people could want with the likes of component video and D-Sub PC jacks. Plus there’s an RS-232C control port to aid system integration, and a very useful optical digital audio output that can be set to output audio from any of the screen’s AV inputs, effectively turning the PD420 into an AV switching box.


Turning to the PD420’s innards, we find a ‘full HD’ pixel count of 1,920 x 1,080, delivering a claimed native contrast ratio of 1,500:1 which rises to 5,000:1 if you activate a provided dynamic contrast feature, whereby the backlight automatically dims when dark scenes are detected.


Without doubt the most intriguing thing about the PD420, though, is the image processing it employs. Most brands in the UK use some kind of in-house picture processing system; think of Samsung with its Digital Natural Image engine, or LG with its XD Engine. But Planar has instead decided to source in an external, rather higher level system, namely the Genesis Cortez-Plus LCD control chip. 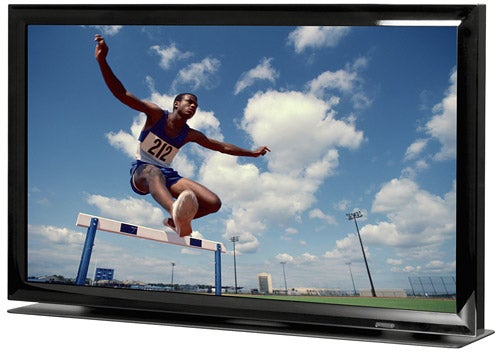 This manages to cram into a single chip a whole raft of image processing technologies from acclaimed image-processing guru Faroudja. Here’s a list of just some of the clever tricks at your disposal: Faroudja’s 10-bit DCDi Cinema Video converter for making sure that contoured edges don’t look jagged; Faroudja’s TrueLife system for enhancing colours, depth perception and detailing; and Faroudja’s Intellicomb 3D for reducing artefacts when upgrading standard definition sources to the PD420’s full HD pixel count. All this and we haven’t even mentioned the TV’s remarkably comprehensive colour management facility.


With the glories of the PD470’s pictures still very much in our minds, it’s with some anticipation that we settle down to watch the PD420. And it doesn’t let us down one bit.


As with the PD470, what makes the PD420’s pictures so special is their really remarkable subtlety. The amount of fine detail the screen reproduces, for instance, is little short of jawdropping. During the opening scenes of ”Apocalypto” on Blu-ray, you get a great example of just how extreme this detailing goes. First, you’re first struck by how crisp and delineated the leaves of the forest look, then you’re struck further by how you can make out individual hairs on the poor hunted tapir, and finally, just when you thought the PD420 couldn’t go any ‘finer’, you start to see subtleties in the tattoos and piercings of the tribespeople that you just don’t appreciate fully on the vast majority of rival flat TVs.

The PD420’s subtlety can also be seen in its colour reproduction; first in the almost infinite smoothness of colour blends (for instance, the actors’ skin is reproduced with no sense of colour banding), and second in the remarkably expressive range of tones at its disposal. There’s none of the slightly cartoonish look many LCD TVs exhibit as a result of their relatively limited colour range.


Yet more evidence of the PD420’s love of the smaller things in life can be seen in dark parts of the picture, as the screen resolves far more shadow detail than usual. This helps give dark scenes a really impressive sense of depth, enhancing still further the growing sense that you’re less watching a screen and more looking through a window at a world outside. 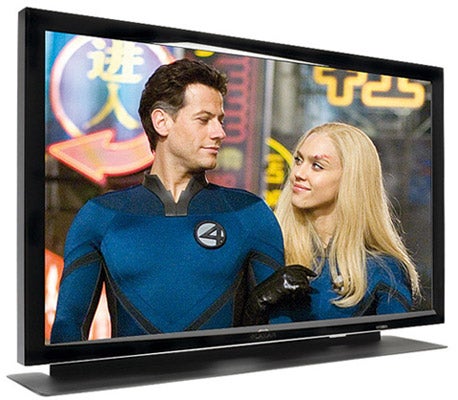 The final element in building this intensely direct relationship with what you’re watching comes from the screen’s immaculate noise handling. The various Faroudja systems in place remove, so far as my eyes can tell, all traces of such common problems as grain, dot crawl, edge shimmer, ghosting, and moiré over areas of particularly fine detail. There’s not even much of LCD’s nigh-on universal motion blur to report, for heaven’s sake.


In order to be absolutely perfect, though, the PD420 would have to deliver slightly deeper black levels than it does. For while it resolves shadow details extremely well, there is a slight grey pall over dark scenes that you don’t get with, say, the very best plasma TVs around (though these plasmas fall short of the PD420 in one or two other areas).


I must warn you, too, that in order to get the sort of superb results I’ve been describing, you really do need to be exceptionally careful with the PD420’s picture settings. But before you get too scared by this, don’t forget that if you buy a PD420, it will very likely be professionally installed for you anyway.


If anyone out there doubts that there’s still a place in today’s price-driven world for a true premium product, we suggest you book yourself an audience with a PD420 and prepare to have your mind well and truly changed. And your wallet emptied…