The VSX-520 is one of three 5.1-channel receivers at the lower end of Pioneer’s current range, sandwiched between the cheaper VSX-420 and higher-specced VSX-820. Naturally, the VSX-520 adds a few extra features not found on the VSX-420, chief among which is the ability to pass through 3D signals thanks to its HDMI v1.4 sockets.

Aesthetically the VSX-520 offers few surprises but it is effortlessly attractive, sporting an eye-catching gloss-black finish, large informative display panel and bulky black dials in the lower corners for volume and input selection. Despite being covered in buttons (controlling sound modes and the built-in radio features) the overall darkness of the front panel keeps them concealed and makes the unit appear uncluttered. Unfortunately, this minimal look is also brought about by a lack of front-panel connections, except for a headphone jack and input for the auto calibration microphone.


On the back, you get three HDMI v1.4 inputs and one output, which doesn’t leave a lot of room for expansion if you’ve already got a PS3, Blu-ray deck and Sky box hooked up, but at this price it would be greedy to expect more. As mentioned these will pass on any 3D signals it receives from Blu-ray players and Sky+HD boxes, and is a pleasing feature to find on such an affordable receiver.

Elsewhere the rest of your components are well catered for. Audio connections comprise two optical digital audio inputs and one coaxial, six sets of analogue stereo inputs and three outputs (one of which can be used as pre-outs when adding surround back or front height speakers), and a subwoofer pre-out. On the video side, you get four composite video inputs and two outputs, plus two sets of component video outputs and one output.


The speaker terminal arrangement is unusual. For the front pair you get banana plug compatible plastic binding posts but the surround and centre channels connect to springclip terminals. This mix ‘n’ match approach is no doubt a cost-cutting measure but the springclips make it a tricky task to connect thick speaker cables.


Completing the line-up are FM and AM antenna sockets and an adapter port for connecting Pioneer’s AS-BT100 Bluetooth adapter, which allows you to stream music wirelessly from Bluetooth-equipped mobile phones, PCs and so forth. This gizmo will set you back between £60 and £100.

At such a wallet-friendly price, we weren’t expecting an abundance of cutting-edge features, but there’s actually a decent amount to get your teeth into. Among the highlights is Dolby Pro Logic IIz, which adds front height channels to the regular 5.1 arrangement. Using clever processing, it sends non-directional ambience to these channels, potentially improving the sense of immersion. That said, you’ll need a separate amp (or powered speakers) to process the line-level signals and elevating a pair of speakers above your TV could pose a problem, all of which could be more hassle than it’s worth.

The VSX-520 can decode Dolby TrueHD and DTS HD Master Audio (something the VSX-420 can’t do), while the onboard Texas Instruments Aureus digital signal processor applies a range of effects suited to different material – Action, Drama, Sports and Classical for example – none of which sounded particularly impressive. The most useful of these is Extended Stereo, which plays stereo sound from all of the speakers. These are joined by Dolby Pro Logic IIx (Movie and Music), DTS Neo:6 (Cinema and Music) and Front Stage Surround Advance, Pioneer’s virtual surround technology. The Phase Control feature makes sure each channel is delivered to the ear correctly without the unwanted distortion that can occur when a channel is out of phase.


Want more? Try the Auto Surround mode that selects the appropriate mode for the type of content you’re playing, or the Auto Level Control (ALC) mode that keeps the volume constant for stereo content. But if that all sounds like too much meddling, simply hit the Stream Direct button and it strips away all the processing for the purest possible playback. To be honest all these processing modes can get a bit confusing (what we’ve discussed is just the tip of the iceberg) but Pioneer should at least be applauded for offering a wide choice. 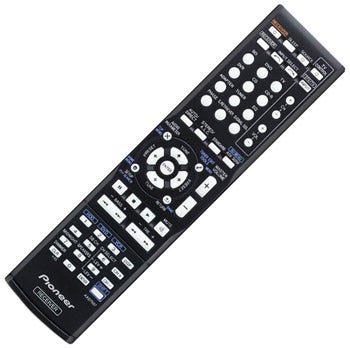 Another key feature is the Multi-Channel Acoustic Calibration (MCACC) mode, which takes away the hassle of sound optimisation. In the box is a microphone that connects to the front panel, and using test tones the receiver measures the acoustic properties of your room, then sets the EQ, speaker distance and levels accordingly. But if you’re not happy with the results, you can set them yourself using an extremely detailed set of adjustments in the Setup and Audio Parameter menus.


However, fiddling with these is a tricky task. There’s no onscreen interface, so everything is controlled using the front display panel. Due to space constraints the display abbreviates much of the text, and only users familiar with the lingo (or those who like to read the manual) will know what it all means.


It’s not made any easier by the remote, which uses unhelpfully small buttons for often-used functions like Return and Setup. The zapper is very cluttered too, peppered from top to bottom in text and buttons, plus the use of a shift key for Blu-ray and HDD functions just adds to the confusion. On the plus side, there are direct access keys for all of the sound modes, plus dedicated buttons at the bottom make it easy to adjust the individual channel levels.

At least the Pioneer’s performance assuages some of this operational frustration. With 5 x 130W of audio horsepower in the tank, the VSX-520 musters a muscular and engaging sound with movies, particularly when you’ve got a raucous actioner like ”Avatar” in the tray.


During the ‘Eywa’ chapter, its DTS HD Master Audio soundtrack is sharp and zesty, with precisely placed surround effects, terrific steering and an expansive soundstage. Crisp top-end detail emanates from every speaker and clear dialogue cuts through the cacophony of battle. On the downside, it’s a little harsh in places – especially the banshees hissing in chapter 16 – and that lack of smoothness puts it down a peg or two compared with Onkyo’s latest offerings.

But during the movie’s quieter scenes the Pioneer displays an impressive deftness of touch. As the camera follows Jake on his first sortie into Pandora’s jungle, a rich sonic tapestry surrounds you. From the crinkling leaves on the floor to creatures howling in the distance, the Pioneer fashions a layered, believable atmosphere that holds the attention throughout. It’s utterly engrossing.


Bass output is also solid too – thumping footsteps and the sound of exploding helicopters have satisfying heft without bludgeoning the other speakers into submission. Overall, the Pioneer is a solid movie performer but not the best you’ll find at this price point.


We also tried out some music and although it doesn’t sparkle in the way we were expecting, failing to eke out delicate detail and reproduce vocals with the same finesse as some rivals, it’s still an enjoyable performance for the money.


In its own right, the Pioneer VSX-520 is an impressive AV receiver. With its attractive looks, future-proofed 3D-ready HDMI sockets, a wealth of audio processing and decent sonic performance, it has a lot to offer. It’s not perfect – some harshness to the sound and an awkward operating system being the two main problems – but otherwise it’s a sound choice.


The trouble is, you can pick up receivers like the Onkyo TX-SR308 and Yamaha RX-V467 for a similar price, both of which offer more features and slightly better performance.