With so many features to explore and set up, it’s a good job Pioneer has made the LX76 easy to use. In the box is a CD-ROM containing the AVNavigator2012 interactive manual, which offers tutorials to help with wiring, operation and software updates – plus you can click a link and transmit setup information to the AV receiver over the network. The same software is available as a free iPad app.

The software will also launch Advanced MCACC – or Multi-channel Acoustic Calibration System to give its full title – which takes care of the fiddly speaker setup for you. Using a custom microphone, it measures the sound and automatically detects the number of speakers, their sizes and distances, and equalises the response accordingly. This advanced version throws in a few extra features such as speaker polarity check, reverb measurement display and crossover frequency. 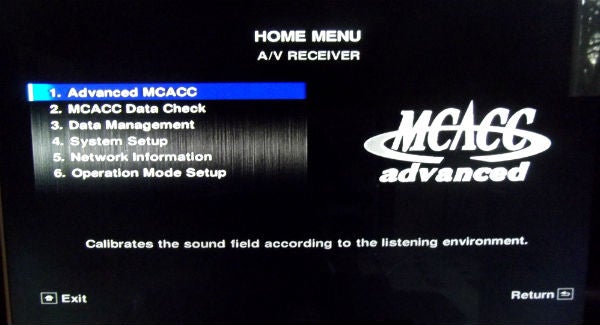 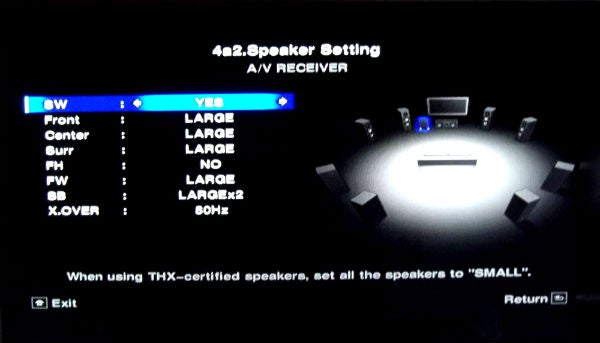 The onscreen menus are consistent with those found on Pioneer’s latest Blu-ray players. Hit the Home button and the setup menu appears against a black background with a moody monochrome graphic on the right to illustrate your selected option. It’s simple but effective, and lets you tweak every single facet of the LX76’s performance. Inexperience users might be phased by the sheer number of options but this amp isn’t really aimed at novices. Network setup is easy whether it’s wired or wireless, and if you’re really savvy you can tinker with the amp’s network settings using your PC’s web browser.

The display on the front of the unit provides all the information you need, but if for any reason you can’t see it, helpful onscreen displays pop-up while you watch, allowing you to adjust the sound or picture without visiting the main menu.

The long, thin remote is a little on the cluttered side, with ranks of similar looking buttons and excessive labelling. Thank goodness, then, for Pioneer’s iControlAV2012 app for Android and iOS devices, which affords you complete control over the amp, from basic operation to speaker, sound mode and video settings. Particularly cool is the EQ mode that lets you draw the graph with your finger, and Sound Explorer, a fun way of playing around with the sound modes using icons that fall down the screen.

We had an inkling that the SC-LX76 would be a good performer given its price and spec, but nothing could have prepared us for quite how exhilarating it sounds with movie soundtracks.

It’s immensely powerful, belting out explosions and effects during Avengers Assemble with the sort of wall-shaking force that could land you with a court order. But this power is skilfully harnessed, making big effects sound full and punchy rather than flabby or harsh. So as Hulk bashes up the scenery or Thor thumps his hammer about the place, you feel genuinely threatened – but in a good way.

As the superhero team takes on Loki and the Chitauri at the movie’s climax, the mayhem is wonderfully orchestrated. It whips lasers and arrows around the soundstage at great speed and places them with the utmost precision, creating an absorbing, expansive soundstage.

Its sense of scale is also impressive. As hulking Chitauri ships swoop from the space portal, you feel their sheer size through the beefy rumble from the sub and the width of soundstage. When Hulk shoulder barges one, the shuddering crunch fills the room.

But when tasked with digging out fine sonic detail, the Pioneer isn’t found wanting. The exchange between Banner and Natasha earlier in the movie is atmospherically decorated with faint background ambience and chirping crickets, while the gentle rustling and creaking of objects in the room is crisp and clear. And throughout the film dialogue is conveyed with the clarity it deserves, no matter how much carnage surrounds it.

In fact, there’s absolutely nothing about the SC-LX76’s performance that disappoints, blending the smoothness and refinement of a Marantz with the sheer muscle of an Onkyo. It’s blessed with musicality too, making our collection of CDs and FLAC files sparkle with pin-sharp detail, silky mids and an impeccable sense of rhythm.

The SC-LX76 is a wonderful AV receiver, with a stunning range of features – including AirPlay, DLNA and a gob-smacking arsenal of audio technology – incredible movie and music performance and a surprisingly stylish design for such a big unit. No, it’s not for beginners or budget buyers, but if you’re a true home cinema fanatic this amp has the features, flexibility and audio prowess to satisfy your every need.