We know what you’re thinking: just what makes Pioneer think it can get away with charging a cool £5,370 (and that’s the cheapest price we could find) for a 50in plasma TV, when similar-sized models can now be had elsewhere for barely a third as much? Well, the answer’s actually pretty simple: the 5000EX is the first 50in plasma ever with a genuine 1,920 x 1,080 ‘Full HD’ pixel count. No fancy pixel-‘creating’ processing, no chicanery with shared electrodes and the like (a la Fujitsu/Hitachi’s Alternate Lighting of Surfaces technology) – just 2,073,600 real pixels.


If you’re now puzzled as to why it’s taken so long for plasma to deliver the full HD pixel monty when LCD has been doing it – and on smaller screens at that – for some time now, the answer lies in the sheer physical space demands of the gas chambers that make up a plasma TV’s pictures. It’s just not possible to fit 1,920 x 1,080 traditional plasma chambers onto a screen as ‘small’ as 50in. Which is why Pioneer has had to develop new plasma chambers barely half the size of traditional ones for the 5000EX, incorporating a groundbreaking T-shaped electrode design that Pioneer claims was the only way they could stop the smaller plasma chambers from misfiring. 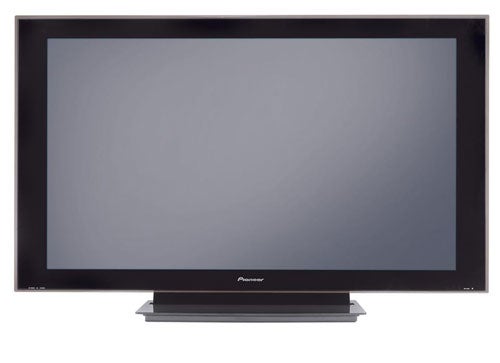 Now it’s becoming clear how much innovation has gone into making the 5000EX possible, that six grand price arguably starts to make more sense. Having said that, Pioneer seems to realise that a healthy chunk of the 5000EX’s target market is likely to be the professional displays/broadcast market, for it ships minus the built-in speakers and tuner you’d expect of a truly domesticated machine.


To our thinking, though, the lack of these two normally key TV basics isn’t the great hardship it first appears. After all, surely anyone considering forking out nearly £5.4k on a TV will a) be driving it with only the best sources, such as a Sky HD receiver (which makes a tuner unnecessary) and b) be using it with some sort of external audio system (which makes built-in speakers unnecessary).

Aside from the lack of any tuner support, the 5000EX’s connections roster looks seriously healthy. Particularly outstanding is the provision of three digital video inputs, comprising two HDMIs and one DVI-D. And yes, all three of these jacks can take digital HD signals right up to 1080p – including 1080p’s various 24, 50 and 60Hz configurations. In other words, the screen’s compatible with both the 1080p/50/60 signals put out by upscaling DVD players, and the 1080p/24 signals seemingly favoured by Blu-ray/HD-DVD HD players. Sweet.


Connections also include five BNC jacks for either component video or analogue PC connection, and S-Video and composite video terminals for anyone daft enough to use such relatively low rent options. Plus the DVI jack is capable of taking digital PC as well as digital video signals. 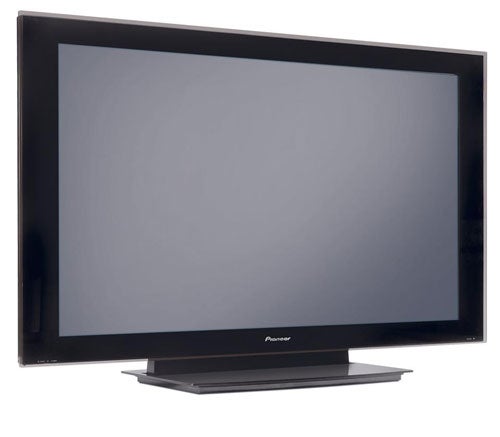 Aside from the smaller plasma chambers, the screen has been constructed using pretty much the same techniques used to such grand home cinema effect on Pioneer’s more domesticated plasma TVs. There’s the same Deep Waffle Rib design to reduce light seepage between pixels; the same PureBlack crystal layer between the plasma chambers and the screen to increase the chambers’ rate of discharge and thus improve brightness and contrast; and the same Direct Colour Filter screen system, whereby the traditional thick plasma glass is replaced by a thinner, single layer structure that dispenses with the offset ‘ghost’ image visible while watching normal plasma glass from an angle.


What’s more, facilities are provided for having the screen calibrated to video perfection by the International Screen Federation (ISF), while the screen’s Pure Drive 2 HD image processing is also lifted directly from Pioneer’s home-targetted screens.

Unable to resist any longer, we fired up the 5000EX with a broad selection of 1080-line HD sources – including a Sky HD receiver, a Marantz DV9600 1080p upscaling DVD player and an Xbox 360 set to output 1080i. And it’s fair to say our jaws pretty much hit the floor in astonishment.

HD picture quality is nothing short of stunning in all kinds of ways – though arguably the single greatest impact comes from its phenomenal sharpness and clarity, which rivals the very best available from the LCD world, and outdoes anything previously seen from a 50in plasma. Naturally this helps the 5000EX deliver awesome results with highly detailed Xbox 360 games like Test Drive Unlimited, but arguably its impact is actually greatest with video sources like an HD football match, since we’re just not used to such fodder looking so remarkably pristine.


Obviously the extra clarity and texture in the 5000EX’s picture is partly down to the screen’s extra native pixel count. But it also clearly helps that the screen can map 1,920 x 1,080 sources directly to its own pixels, rather than having to use potentially messy scaling processing to ‘downgrade’ true 1080 sources to fit a lower resolution like 1,366 x 768.


The 5000EX’s high pixel count can also be seen in the outstanding subtlety of its colour blends and shading, as the extra resolution makes it possible to portray much finer gradations. 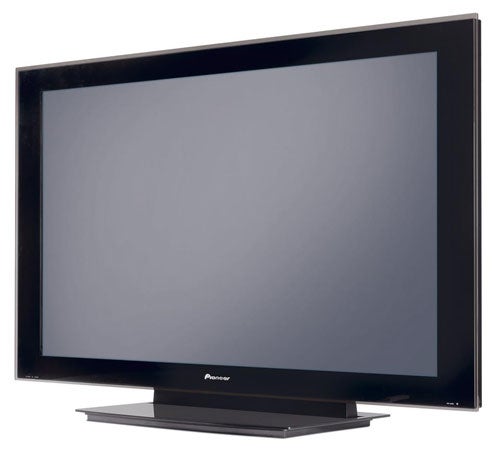 Other more general strengths familiar from Pioneer’s lower resolution plasmas are thankfully also still in evidence. Black levels, for instance, are among the best the flat TV world has to offer, thanks to their combination of profound depth, and retention of subtle shadow details. In this respect in particular the 5000EX outperforms any LCD TV we’ve seen, and so provides arguably the most telling argument for choosing this screen over all other current full HD flat TV models – so long as you’ve got £5.4k to spare.


Colours are superb too, having sufficient vibrancy to power off the screen, while also retaining tones that look effortlessly realistic and involving. Finally we have to say that while certainly not perfect, standard definition pictures actually hold up noticeably better on the 5000EX than on most 1080-line LCD TVs we’ve seen.


So is there anything wrong with the 5000EX’s pictures? Only that the screen seems unusually susceptible to plasma’s screenburn problems, where prolonged exposure to a really bright image segment such as the Sky News channel logo can lead to a shadow of that image being ‘burned’ permanently into your screen.


Provided you’re extra careful to avoid screenburn, especially during the first 100 hours of the screen’s life, and provided you can afford it, you can snap up a PDP-5000EX safe in the knowledge that it delivers simply the finest 50in pictures we’ve yet seen.