Pioneer doesn’t do things by halves. Whatever type of product it makes, whether it’s TVs, DVD decks or Blu-ray players, it’s sure to be packed with all the latest technology, offer astonishing build quality and more often than not deliver exceptional performance. Of course, you end up paying a higher price for the privilege but that’s Pioneer’s modus operandi these days – if you want the best, it’s gonna cost you.


But its latest DVD/HDD combi, the DVR-560HX, is an interesting anomaly – yes it’s stuffed with a remarkable range of hi-tech features and features high-end build quality, but it’s actually cheaper than the Panasonic DMR-EX88 (currently the best DVD/HDD combi out there) which could give it an advantage when they’re lined up side by side on shop shelves.


The unit is available in silver or black and it’s on the chunky side, but its classy looks disguise this fact and the robust construction makes it feel like it could withstand a bomb blast. Under the front-mounted flap is a veritable fairground for any technophile, with loads of buttons and sockets to play with. Most notably, there’s a common interface slot, which allows you to add pay TV channels to the already lengthy list of Freeview channels (courtesy of the built-in digital tuner). To the left are not one but two USB ports (one type A and one type B for PictBridge printers) and a DV input that will be a welcome sight for digital camcorder owners. On the other side are S-video, composite and stereo audio inputs for non-digital sources.

Rear socketry includes an HDMI output that sends 1080p, 1080i, 720p and 576i/p pictures to a suitably-equipped display, while the two RGB-enabled SCARTs make it possible to record from an external digibox in the best possible quality and send RGB pictures to your TV at the same time. Elsewhere there are more AV inputs and outputs, plus component video output, coaxial digital audio output (but surprisingly no optical). The line-up is completed by a G-Link port for the infra red transmitter that works in conjunction with the on-board Guide Plus EPG to make timer recordings from external set-top boxes.


On the inside, it’s fitted with a 160GB hard-disk, which is relatively small compared with the Panasonic’s 400GB, but the 455 hour maximum recording time should be enough to keep the average TV viewer happy. As well as the hard-disk, you can also record onto DVD and thankfully the 560HX is a multi-format affair, which means you can use any type of disc, including DVD-RAM/+RW/-RW and dual-layer variants of DVD-R and DVD+R.


And, as is the trend among the current crop of DVD/HDD combis, the DVR-560HX can store and play music, video and photos from the hard-disk, which can be transferred from a PC or memory device using the USB port located on the front of the unit, or from a DVD or CD. Transfer is quick and hassle-free and playable formats include DivX (including VOD files), MP3, WMA, AAC and JPEG. Sadly it doesn’t play WMV files like Pioneer’s DVD players, but overall its compatibility list is impressive.

The Pioneer shares one of Panasonic’s killer features: internal CD ripping. It’s simple but brilliant – load up a CD, let the Gracenote database find the track, artist and album info (from a built-in database – no Internet connection needed) and then rip them directly to the hard-disk, turning the deck into a jukebox.


The deck also boasts all of the flexible recording features we’ve come to know and love from digital recorders. But what separates Pioneer’s models from other brands are its manual recording settings. Whereas Panasonic offers four set recording bitrates, Pioneer offers 32 ‘steps’ that give you more flexibility to squeeze recordings to a given amount of space.


But if you want to keep things simple, you can turn off manual mode and select one of six presets, ranging from the XP mode (offering 34 hours on the HDD or nearly two hours on DVD-R/+R (DL)) down to SEP mode (340 HDD/18hr DVD-R (DL)).

If you select manual mode you can also select a 15Mbps XP+ mode, which is useful for making faithful copies of DV camcorder footage – but it’s only available for hard-disk recordings. You’ll also find a separate XP mode that uses LPCM instead of stereo Dolby Digital. As if that wasn’t enough, the Optimised Recording feature automatically adjusts the quality during timer recordings if you haven’t got enough space – a little like Panasonic’s Flexible Recording mode.


Elsewhere there’s a pause live TV feature, but unlike other recorders it actually starts recording the programme on the hard disk when you press the button, as opposed to using a buffer memory. The downside is that the picture is displayed in the currently selected recording mode when you resume playback – not good news if you’ve left it in SEP.


Other features include series recording (although it’s not Freeview Playback badged); KURO Link support via HDMI, which lets you control the recorder using a Pioneer plasma remote; and the Video Adjust menu that offers an unfeasibly detailed range of picture adjustments. 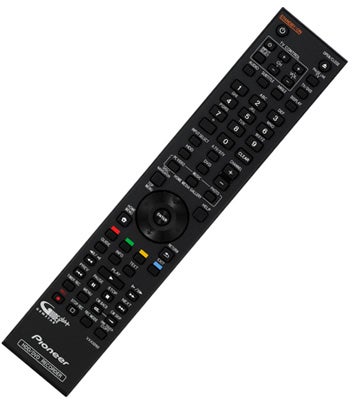 Digging around in the setup menus, the amount of tweakable options is staggering, making this deck best suited to more experienced users. But the deck’s onscreen presentation is impeccable across the board and there are a few concessions to beginners, such as a range of helpful info boxes that describe various functions, or warn of potential recording clashes.


The process of copying from HDD to DVD or transferring files from USB is well signposted and can quite easily be worked out without the help of the manual. The onscreen jukebox menus are top-notch too, while the remote provides direct access to video, music and photos stored on the hard-disk.


Hit the Direct Navigator button and it brings up a list of all your recordings, each beautifully presented in a box with a moving thumbnail on the left. The details are clearly displayed, and to the right is a list of editing options where you can erase a section (with frame accurate results), change the thumbnail, divide a title, rename titles using a keyboard connected to the USB port, and fiddle about with the chapter points. The latter are added automatically when the unit detects a black screen to help you skip adverts.


The brightly-coloured Freeview EPG is tidy and easy to follow, and the colour coded options along the bottom allow you to skip forward 24 hours and search the entire guide for programmes of a certain genre. It’s much preferable to the alternative Guide Plus EPG, which is clumsy and inconvenient but it does allow you to make timer recordings from external receivers and the built-in analogue tuner.

The complex nature of the unit means that the long, thin remote is densely packed with buttons, but the excellent labelling and helpful placement of frequently used keys give it a fairly intuitive feel.


Live Freeview pictures look clean and sharp, and compare well with dedicated Freeview receivers and rival recorders. To test the DVR-560HX’s recording quality, we tuned into some Wimbledon coverage on BBC Two using the built-in Freeview tuner, and recorded a few minutes in each of the preset recording modes. The fast-moving action caused no problems for the 720 x 576 XP and SP modes, which delivered superb results. The movement of the players and ball was tracked easily with none of the picture break-up or blocking that occurs at lower transfer rates. The green grass of the Wimbledon courts looks bold and noise-free and detail is surprisingly sharp, given a spit and polish on our HD Ready TV by the clean 1080p upscaling. 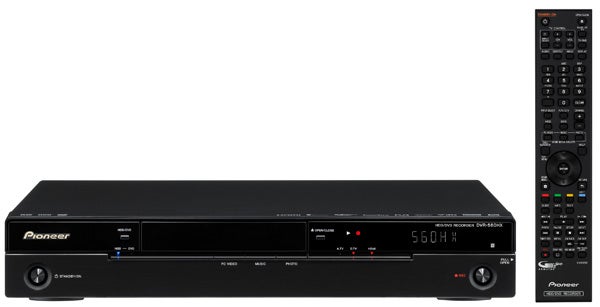 In LP the resolution drops to 480 x 576 but the deck subjectively retains a lot of detail. The drop in bitrate, however, causes extra pixel noise around the edges of the running tennis players, resulting in softer and less satisfying pictures. Panasonic’s LP mode pictures are arguably better, but if you want to squeeze a couple of movies onto a DVD in watchable picture quality, then this mode is a perfectly acceptable way to do it.


In EP mode, onscreen text becomes blurred and noise increases, giving the image a somewhat hazy, almost ethereal look. These artefacts increase exponentially in SLP and SEP to the point where tennis becomes unwatchable – a large, distracting halo of feathery noise surrounds the players and crowd shots are a queasy mess, making these modes better suited to more static material.


We also loaded ”Magnolia” into the tray to test pre-recorded DVD playback, and the Pioneer reproduces this vibrant movie with aplomb. The early scenes in the dark apartment during the pre-credits sequence reveal no MPEG block noise on the internal walls (cheap DVD decks have struggled with this in the past), plus there’s a great deal of detail in the picture and colours are strong without looking garish.


The DVR-560HX is a mightily impressive DVD/HDD combi, offering a stupendous amount of features at a much lower price than you may have expected for a Pioneer product. Freeview and DVD picture quality is of the highest order, it plays a wide array of formats and build quality is exceptional. The only negative thing we can think of is that it doesn’t quite mask its inherent complexity quite as well as the Panasonic DMR-EX88, which boasts a more user-friendly interface. But if you do opt for the Pioneer, you won’t be disappointed.