In 2007, with Blu-ray still in its infancy, a drive for your desktop computer, such as the LG GBW-H10N would have cost you an astonishing £435. Yet mere months later, in December of the same year, you could pick up a Pioneer BDC-S02BK for under £100 – progress if ever we saw it. And now in December of 2010, a Pioneer DBC-206MBK Blu-ray writer can be yours for £190 or so, justifying its higher asking price by being the first BDXL writer on the market (or rather, soon to hit the market, as the drive isn’t actually available to buy quite yet, though it should be imminently).

BDXL, for the unfamiliar, is the name given to the latest evolution in disc capacity of Blu-ray, specifically encompassing triple- and quad-layer discs, boasting 100GB and 128GB capacities respectively. Those of us who remember the days when fitting 650MB of data on a CD-ROM was a feat should be suitably impressed by a disc format that offers some 200-times the capacity.


As well as multi-layer BDXL discs, the BDC-206MBK will record to dual- and single-layer Blu-ray, DVD+/-R and RW, and CD-R and RW. However, as has become traditional for Blu-ray players, read and write speeds for DVDs and CDs are lesser than for dedicated writers for those formats. In the case of the BDC-206MBK quad- and triple-layer Blu-rays are read and written at 4x, dual and single-layer discs at 6x. Moreover, Pioneer’s own BDC-205BK will write the latter two at 12x, as will other manufacturers’ drives, so if you’re not after BDXL capacities you’ll want to save your cash.

To ensure you can write to BDXK Blu-rays, Pioneer is bundling Cyberlink Media suite (which includes Power DVD, letting you play Blu-ray movies and even offered GPU-accelerated decoding). We’ve no complaints about Power2Go as a disc writing tool, and it’s good to see Pioneer offering a complete solution, not just a drive that’s useless without additional expenditure.


In our testing 94GB of data transferred to a 100GB disc in just under two hours, at a transfer speed of about 13MB/s – somewhat under the 18MB/s 4x should offer. With so little BDXL media available, we can’t tell if the drop is to be expected, or a result of the relative infancy of BDXL, but we’re inclined to give Pioneer the benefit of the doubt. If you plan on writing a lot of DVDs and CDs you’ll probably want to invest in a dedicated burner, as the 8x read and write speed for DVDs and 24x read and write for CDs won’t be setting any records.

A potential stumbling point for BDXL is that no player currently on the market, be it a PlayStation 3 or a Sony BDP-S570, will play these discs. However, although no current Blu-ray player can use BDXL discs, forthcoming devices almost certainly will. These new format discs are intended to be the delivery vessel for 3D Blu-ray films, as the extra capacity makes fitting the extra that data 3D-encoded films require much easier. Whether you really want to watch “The Lord of the Rings Extended Edition Directors Cut – 3D Remastering!” or would happily stick to a ‘normal’ high-def version is a matter for debate (or, arguably, of taste) but BDXL will be the way you do it.

Moreover, even if commercial BDXL releases aren’t particularly prevalent, it’s likely that manufacturers will relish touting the ability of their players to access up to 128GB of your own video from a single disc. Blu-ray recorders such as the Panasonic DMR-BS850 will find plenty of utility in higher-capacity discs, too, requiring you to change them out less often – always a good thing.


There’s arguably more utility outside of the video domain. External storage in the form of portable hard drives and flash memory devices may be replacing discs as the way most of us carry around large amounts of data, but discs have their advantages still. For a start, a terabyte of data on 16, quad-layer Blu-rays will take up less space (in sleeves, not jewel cases) than a 2TB 3.5in hard drive, and weight quite a lot less. We can see our government appreciating the opportunity to lose ever greater amounts of on the great British railway system, too. 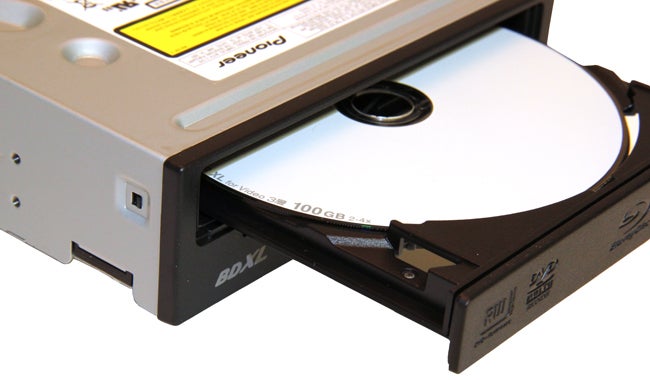 While whether you would want a BDXL drive may be a matter for deliberation, but if you come down in favour of the format deciding if you want a BDC-206MBK or not is easier as its the only Blu-ray writer on the market that can handle BDXL discs – unless you could Buffalo’s pending external drive, which we don’t, as it uses Pioneer’s BDC-206MBK within its chassis. So ahead of the curve is Pioneer, in fact, that its BDC-206MBK has become the de facto drive which anyone currently working with BDXL discs is using. Not that the Blu-ray Disc Association using Pioneer drives is much endorsement when it’s the only game in town, but it should instil confidence in the fitness for purpose of the BDC-206MBK.


As the first BDXL-compatible Blu-ray drive on the market, the Pioneer BDR-206MBK is at something of an advantage. If you do need or want the ability to write up to 128GB of data to a single optical disc, this is your only option for now (short of getting the same drive in an external Buffalo enclosure). Taking into account the added value of Cyberlink’s Media Suite we can’t complain about the £190 the BDR-206MBK should be available for once retailers get stock in the coming weeks.