Those of you who liked the look of Pioneer’s BDP-LX71 but found the £600 price tag a bit on the steep side might want to investigate this entry-level version, which costs almost £300 less than its stable mate but somehow offers an almost identical feature list. The only difference between them is that the BDP-51FD features a few cosmetic tweaks and is fitted with inferior video DACs. It’s hard to believe that these tweaks alone resulted in such a dramatic price drop but we’re certainly not complaining…


The BDP-51FD’s gloss-black fascia feels more plasticky than the LX71, plus it replaces the touch-sensitive buttons found on the pricier player with normal ones, and abandons the silver trim around the play button. But despite these tweaks this deck still looks the business, especially when paired with the company’s similarly styled AV receivers and plasma TVs, and its chunky dimensions make a refreshing change from the normal slimline fare.

On the back panel you’ll find an identical selection of sockets to the LX71, and it covers all bases. On the video side you’ll find HDMI (v1.3), component, composite and S-video outputs, while audio sockets include optical and coaxial digital outs, 7.1-channel analogue outputs and a separate set of analogue stereo outs. The sockets aren’t gold plated this time around, but Pioneer should be applauded for not cutting down on connections, even at this lower price point.


Although its similarity to the LX71 is a blessing in many ways, it’s a hindrance in others. Like the BDP-LX71, the 51FD is specified as Profile 1.1, which means you’re paying for a player that doesn’t deliver the complete Blu-ray experience, when there are cheaper decks that support BD Live features.

Also disappointing is that the BDP-51FD shares the LX71’s inability to decode DTS HD Master Audio soundtracks internally, which means you only get the DTS core from the multichannel analogue outputs. A firmware update is on its way in the next couple of months that will add this feature, but from the box the deck’s audio capabilities remain incomplete. It can, however, output decoded Dolby TrueHD from the analogue outputs, as well as transfer Dolby TrueHD and DTS HD Master Audio to your receiver in bitstream or PCM.


Elsewhere the feature list is exemplary. It can output Blu-ray discs in their native 24Hz frame rate, and with a growing number of TVs supporting 24Hz signals (including Pioneer’s own plasmas) its inclusion is crucial. Your DVD collection is also in good hands thanks to the deck’s 1080p upscaling capabilities, and so is your digital media collection – the player accepts DivX, AVCHD, MP3, WMA and JPEG files, and spins a wide array of disc formats.

Like most Pioneer products, the BDP-51FD sports extensive picture calibration tools. Hit the Video Adjust button on the remote and a pop-up menu appears, offering a clutch of picture presets that cater for different display types, as well as a detailed range of user-defined settings that can be stored in three memory positions.


The sophisticated onscreen presentation makes the Pioneer a real pleasure to setup and install. The main Home menu screen, for example, is all black with crisp white text and flashy graphics, plus the icons along the bottom helpfully correspond with those on the remote. The setup menu is packed with options but never feels intimidating, and newcomers to Blu-ray may find the Setup Navigator useful. 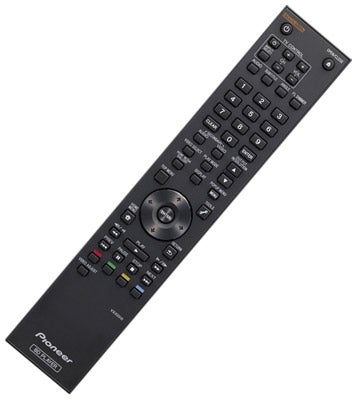 The separate Tools menu presents you with a handful of options during playback (including the BonusView secondary video and audio settings), and its inclusion is useful because you can’t access the setup menu without stopping disc playback, and most Blu-ray discs don’t let you resume where you left off. Our only operational gripe is that the deck is a real slowcoach when it comes to booting up from standby or loading discs – ”The Dark Knight” took 1 minute and 40 seconds to start up, which feels particularly cumbersome when compared with the lightning-quick LG BD300.


The deck comes with a slim remote that’s comfortable to hold, and despite the buttons being slightly on the small side, the clever, intuitive arrangement lets you control the deck without having to gawp at it for ages searching for the right key. Thanks to the KURO Link option, the deck can also be controlled with the remote from a Pioneer TV or receiver connected to the deck’s HDMI output.


Downgrading the high-definition video DAC from the LX71’s 297MHz/12-bit chip to a 148.5MHz/12-bit version hasn’t made a huge difference to the BDP-51FD’s picture quality, which is, in short, phenomenal. Having tested most of the budget Blu-ray decks on the market, we can safely say that few of them come close to the Pioneer, making this by far the best performer in its class.


”The Dark Knight” on Blu-ray has rarely looked better. The BDP-51FD paints the film’s epic visuals with cinematic richness, presenting Batman’s black suit with unparalleled depth and making the contrasts between light and dark on Gotham City’s streets look bold and distinct. It all contributes to a dense, punchy image that shows what the Blu-ray format is really capable of.

The BDP-51FD also delivers wonderfully sharp pictures, teasing out every last speck of detail from the disc’s pristine transfer – aerial shots of Hong Kong are beautifully rendered, patterns and textures are crisp and focused and the clear reproduction of the Joker’s facial features makes his grotesqueness more pronounced than ever. The deck combines its excellent eye for detail with smooth, natural colour reproduction and a complete lack of noise.


Our positive impressions continue with a run-through of the HD HQV disc from Silicon Optix, and like the BDP-LX71 it makes short work of the crucial tests. Its handling of the diagonal filter test is superb, rendering the rotating bars with completely straight, smooth edges. With the Film Resolution Loss test, there’s no strobing in the corner boxes of the test pattern, and with the camera pan across the stadium the seats are focused and exhibit no moiré noise or flickering. 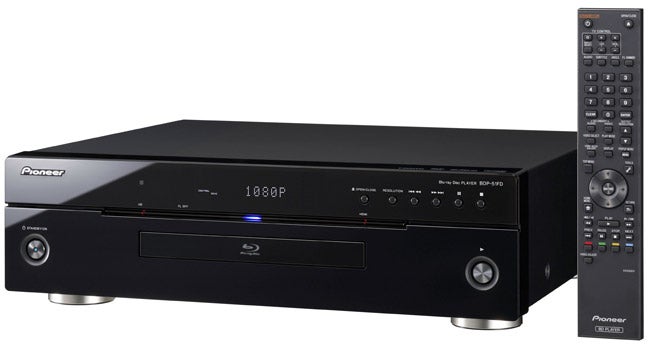 It’s not just a dab hand with hi-def material either, as DVDs upscaled to 1080p also look sublime. It may not be hi-def but ”Star Wars Episode III” on DVD still boasts loads of detail, emphatically defined edges and bold, radiant colours. It’s also hard to detect any artefacts like mosquito noise or jaggies, which is evidence of some pretty special upscaling circuitry at work inside.


We’re also highly impressed by the player’s audio capabilities. We channelled ”The Dark Knight’s” TrueHD track through the Pioneer VSX-LX51 AV receiver and the two components make perfect bedfellows, delivering the sonics with power, poise and dazzling clarity. CDs also sound terrific – George Benson’s jazz-funk classic Breezin’ sounds sweet as a nut, with Benson’s guitar licks reproduced with loads of character, while the drums are delivered with plenty of snap.


It’s great to see Pioneer delivering a product that gives those on a modest budget the chance to see what the company is capable of, and there’s no doubt that the BDP-51FD delivers the best picture performance we’ve seen from a sub-£400 player.


Had Pioneer included BD Live capability and DTS HD Master Audio decoding from the box it could have been the Blu-ray bargain of the century, but as it stands these niggling omissions – along with the sluggish disc loading and boot-up times – prevent Pioneer from earning top marks.


As a result, those concerned with getting the most for their money might find that other players (like the BD Live-capable Panasonic DMP-BD55) offer better value, but if you want sublime pictures, couldn’t care less about BD Live and own a receiver with DTS HD Master audio decoding, then this is definitely the player for you.