We know it’s only February but summer will be here before you know it and your thoughts may already be turning to your holidays, but thanks to the recession there’s a good chance you’ll end up taking them in this country. And as any parent will tell you, long car journeys can be a nightmare with bored kids in the back, but Philips has the ideal solution to keep them entertained. 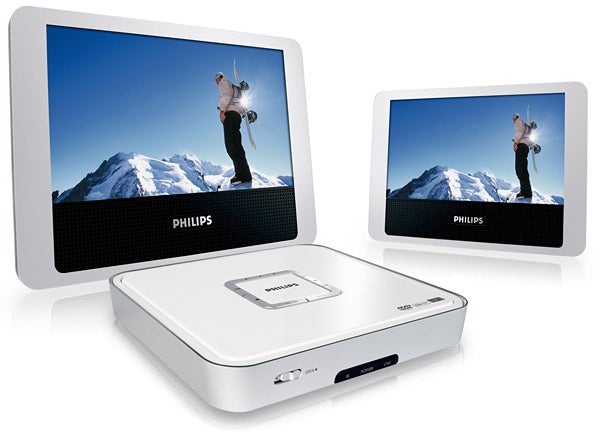 The PET712 is a portable DVD player designed for in-car use that comes with two independent screens, allowing two kids (or maybe three if they’re prepared to share) to watch movies all at the same time, without squabbling over who gets to hold it. In the box is a compact, square shaped player unit, styled in a fetching white and light silver finish, which feels worryingly delicate for a portable product but Philips insists it’s shock proof. On top of the player’s disc flap is a panel of playback and menu control buttons, and around the sides you’ll find a few connections, including two AV minijack outputs for the two screens, DC in/out and a headphones output (which has its own volume control). 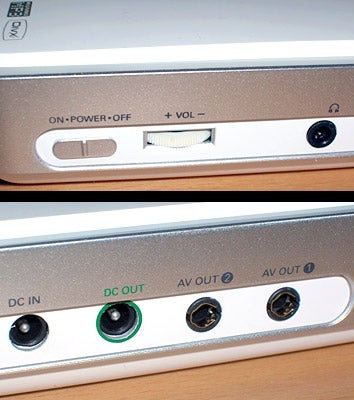 
The dual LCD screens are similarly styled in silver and white, and the 7in, 16:9 screen size is ideal for in-car movie viewing. Although there’s no stand on either of the screens for table-top playback, the player is supplied with a car mount pouch that allows you to attach the screens to the headrests at a convenient viewing height.


Each one is equipped with composite and analogue stereo inputs, which connect to the main unit using the supplied minijack-to-phono adapter cables. You also need to hook up each screen to the DC power output on the main unit using another adapter cable, but there’s no on-board rechargeable battery – during car journeys you have to use the supplied cigarette outlet adaptor. 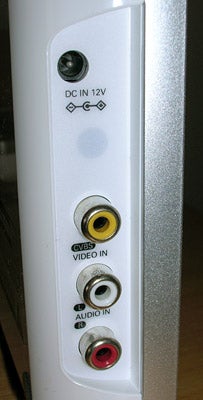 The screen resolution is 480 x 234 pixels, which will require some significant downscaling to display DVDs, while the 250:1 contrast, 200cd/m2 brightness and anti-glare panel should be enough to ensure clear visibility in bright viewing conditions. The screens feature dedicated brightness, contrast and aspect ratio controls, activated using the panel of buttons below the screen. Each screen also sports built-in speakers which offer 250mW of power, and handily each screen features its own volume control and headphones output.

As for the DVD player, it offers a decent range of features. Aside from DVD and CD playback, it also spins DVD-R/-RW, DVD+R/+RW, CD-R/-RW and Video CDs. It even plays DivX, MPEG-4, MP3 and JPEG files, which means you can enjoy your media library on the move, but the lack of a USB port means you have to transfer them to CD first.


When playing back DVDs you can control them with a healthy range of trickplay modes, which include a three-stage zoom and shrink mode, A-B Repeat and a 32x scan mode, but annoyingly you have to hold down the Chapter Skip buttons to access it – we can foresee kids accidentally skipping chapters on a regular basis. 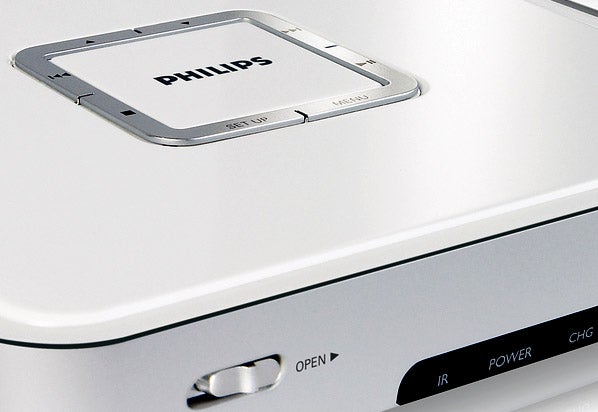 The player’s operating system is the usual Philips DVD fare – a little rudimentary but logically laid out and responsive, and among the settings you’ll find the DivX VOD code, parental lock and aspect ratio options. The supplied remote is terrific – it looks distinctive with a light grey finish and curved back section, and it’s simple enough for children to master. The menu control buttons are large and well-placed and the playback controls are clearly marked, but the bank of keys towards the bottom are on the small side. 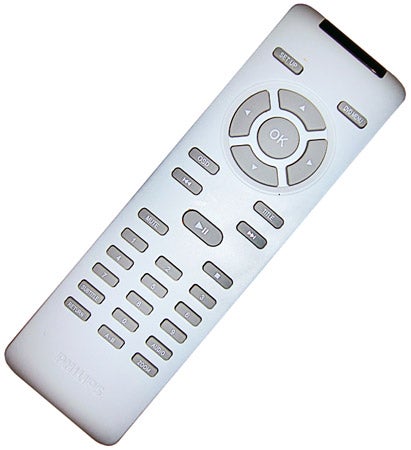 In action the PET712 is an impressive little DVD player, and absolutely fine for kids in the back of the car, but anyone with a more critical eye will notice some clear picture flaws. But starting with the good stuff, the unit’s excellent colour reproduction makes ”Spider-Man 2” look natural at all times. Many portable DVD players make skin tones look overly red and waxy but not this one – flesh tones are subtly shaded and realistic, with Kirsten Dunst’s delicate complexion looking particularly convincing, while strong colours like yellow New York taxis and Spider-Man’s red suit look dazzling. Also, black level and shadow detail are better than you’d expect from these little screens, with the creases and folds on Peter’s suit remaining visible and other dark objects managing to avoid looking like black holes.

As for the bad stuff, the low screen resolution gives edges a hint of softness that a higher-res screen would no doubt have solved. It’s hard to make out detail on long shots of people and objects, and because you can make out the grid-like structure of the panel, edges and diagonal lines also seem jagged. It’s not helped by the use of composite video rather than higher-quality S-video either. But as mentioned, these faults only become a problem when you look more closely at the screen than you normally would – for casual viewing from a normal distance the images are perfectly enjoyable. 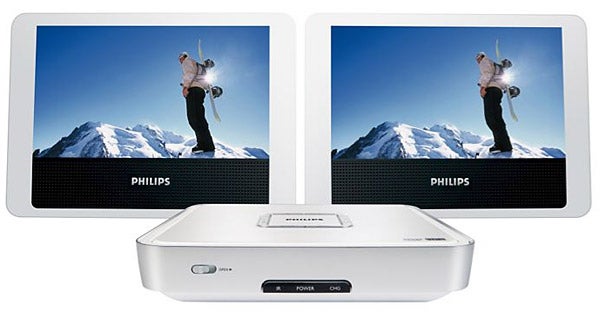 With regard to audio, the screen’s speakers make dialogue sound clear enough to be heard over the hum of the engine, but sadly they also make ”Spider-Man 2’s” high-octane action scenes sound tinny and compressed with no bass whatsoever, and when turned up loud they can get a bit fatiguing on the ears, so it’s worth investing in some good headphones. And if you do, you’ll be treated to some superb CD and MP3 playback, with the healthy bass and treble levels lending music lots of punch and detail.


If you’re thinking of investing in a portable DVD player for those long summer car journeys then the PET712 is a splendid proposition. Not only do the dual screens make it very convenient if you have two kids in the car, but it’s also simple to use and looks attractive. It might not deliver the sharpest or most detailed pictures possible, but considering the target audience that’s not a big deal – in all other respects it’s a very likeable player that should ensure that you’ll never have to hear ‘are we there yet?’ ever again.