The Philips Momentum 326M6VJRMB seems ready made for the living room, but I wonder if console gamers will take to this so late in the life cycle of the PS4 and Xbox One. I'm curious to see how adept it is at things besides gaming. You can pick up 4K monitors for a lot less now, so the Momentum will need to impress to justify that price tag.

What is the Philips Momentum 326M6VJRMB?

The Philips Momentum 326M6VJRMB is a gaming monitor from display specialist and brand license partner for Philips monitors MMD, and is aimed primarily at console gamers who want a 4K monitor to get the most out of their PS4 Pro and/or Xbox One X.

Impressive colour space coverage – 135% of of sRGB and 98.6% DCI-P3, apparently – mean that the Philips Momentum 326M6VJRMB meets the VESA DisplayHDR 600 certification, so streamed HDR content from Netflix and Amazon ought to look fantastic on this too.

Then there is Ambiglow, a feature which sees a strip of ten LEDs shifting through different colours, a low blue light mode for late night gaming sessions, and support for adaptive sync, to help cut down on screen tearing. 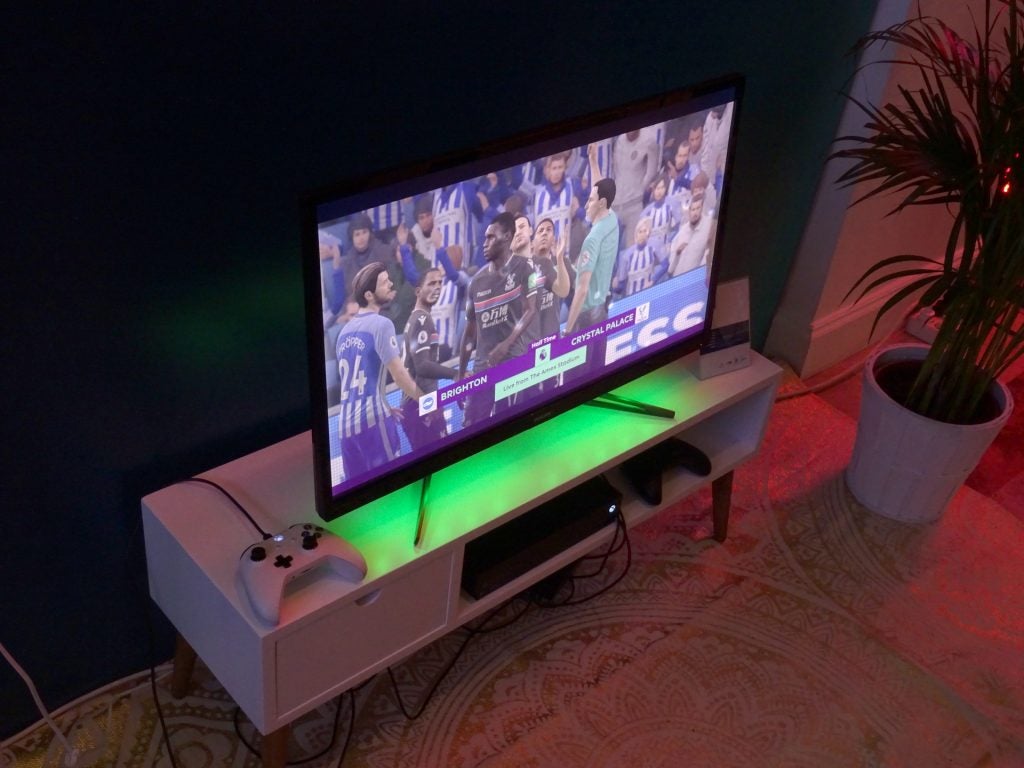 Fancy lights can’t change the fact that I suck at FIFA, but the Ambiglow effect is quite soothing.

The Philips Momentum will be priced around €599 and is due to go on sale at some point in April. Note that while there is no official UK price for this yet, this converts to around £515 at the time of writing.

We will update this once more info on price and a release date is available.

The Philips Momentum 326M6JVRMB is attention grabbing. It was kicking out a serious amount of light, so much so, that I had trouble getting my camera to focus on anything until I adjusted to compensate for that.

You’d be forgiven for thinking that it was a TV at a glance, too. Given that it’s aimed at console gamers and therefore more likely to sit in a living room or bedroom in lieu of a TV set, that’s perhaps intentional.

An Xbox One X with FIFA ‘18 was set up, so I sat down to try my hand at that. I’m not a regular FIFA player, as evidenced by the fact that I let Crystal Palace run rings around me, but more importantly, I’m not familiar enough with the game to know if it looked any better than it would have done on another monitor or TV. Generally, I can say that the on screen action was lightning quick, with players on the pitch responding quickly to my cack handed commands.

The Ambiglow feature is quite nice – as you can see from the pictures I took, the LEDs set underneath the Momentum’s chin do a good job of projecting a pleasing ambient glow. It might be more effective if your surrounding furniture is white, though. The light strip was stuck in a basic demo mode, which just saw the colours changing every few seconds. 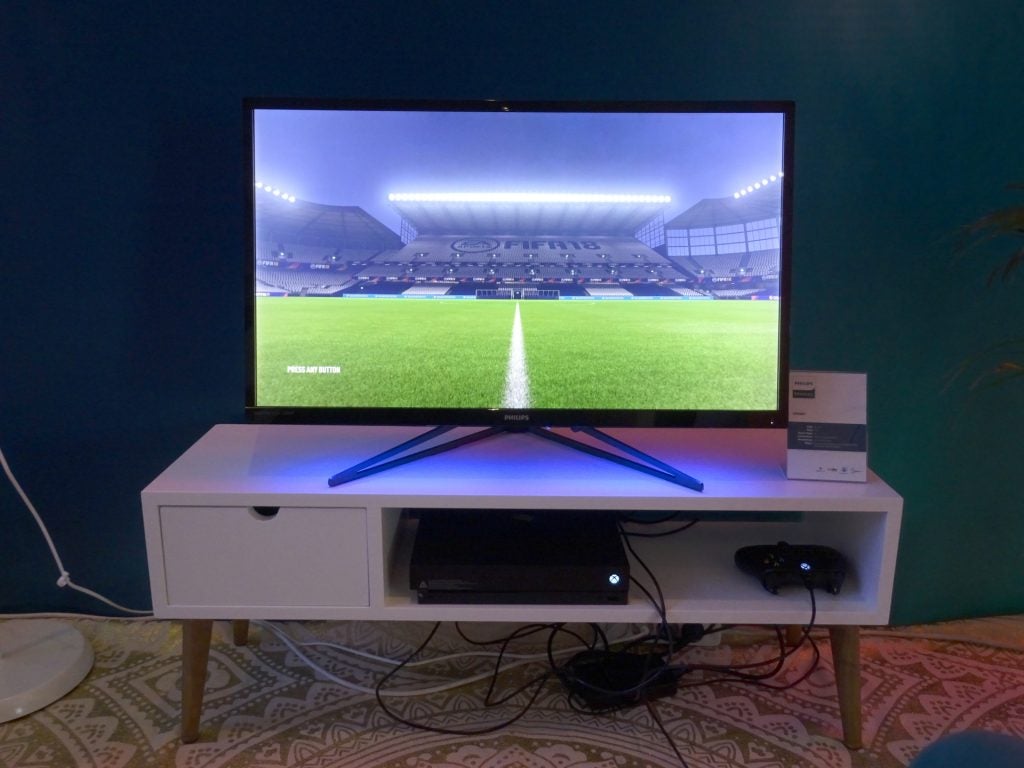 Though it’s aimed mainly at console gamers, the spec sheet suggests that the Philips Momentum will be a dab hand for creative applications, too.

I asked MMD staff, including Carlos Sánchez, AOC’s production manager for Europe, if the colours of the lights could be synced to any on-screen action, as they can on the Philips 436M6VBPAB. Nobody was able to confirm or deny this and I wasn’t able to find the appropriate setting in the OSD which might have enabled this during my brief time with the Philips Momentum.

DTS Sound-enhanced speakers are also included here, but in the demo area, where noise levels weren’t exactly optimal, I can’t say for sure whether the noise of the crowd roaring sounded particularly good.

In terms of ports, you get HDMI 2.0, DisplayPort 1.4, USB 3.0 gen 2 with fast charging and the typical audio in and headphone out connections.

Aside from console gaming, the Philips Momentum 326M6JVRMB on paper looks like it may be suitable for photo work and video editing.

To recap, MMD says that the Momentum can cover the entire Rec. 709 gamut, 98.61% of DCI-P3, 114% of NTSC and 135% of the sRGB colour space. On paper, this means suggests that it could be great for video editing and photo work too, though nobody was able to tell me about Adobe RGB coverage.

Support for adaptive sync technology is also promised, though at the time of writing, no-one could tell me if this meant Nvidia’s G-Sync or AMD’s FreeSync (or both) will play nicely with the Momentum out of the box.