Early this year, Philips did something rather clever. It took the cool – and popular – new idea of the ‘soundbar’ speaker system and stuck a DVD player in it. The result? The really rather enjoyable HTS8100 soundbar home theatre system. This system really did prove a terrifically elegant and compact way of bringing the world of home cinema into your living room – no matter how small or design-led that room happened to be.


It came as little surprise, then, when we heard that Philips was working on a new and improved version of the HTS8100, and we’re happy to say that the resulting product, the HTS8140, is sitting pretty on our test benches as we write. Also, when we say ‘sitting pretty’, we mean it. For rather cunningly Philips has decided to style the HTS8140 to match the gorgeous looks of its new 7603, 9603, and 9703 TVs. So, you get a sumptuous gloss-black finish emphasised delightfully by a groovy translucent ‘shroud’ that curves forward around the sound bar’s edges from its rear. We’ve seen cute sound bars before, but never one as cute as this. Especially as the light show put on by the DVD section in the soundbar’s middle delivers just the right blend of laid back subtlety and flash-Harry grandstanding.

Obviously the matching styling makes the HTS8140 an ideal match for Philips’ own TVs, especially the 42in models it’s sized to accompany. But we can confirm that it also looked very tasty indeed under both a 50in Pioneer plasma and a 140in projection screen, so don’t let its 42in optimisation put you off if you’ve got a screen that’s bigger – or even slightly smaller.


The HTS8140’s aesthetic quality isn’t restricted to the soundbar section, either. For the promisingly large subwoofer that ships with the HTS8140 is also beautifully put together, enjoying a lovely combination of gloss and matte finishes that make it more like a piece of furniture than a big old bass grunter. It was all we could do to stop ourselves putting our cups of coffee on it, in fact – and we certainly never once felt the urge to hide it behind the sofa.

In terms of how the thing fits together, you attach your power supply and some of your AV inputs to the subwoofer, with a single ‘umbilical cord’ then feeding power and AV info from the sub to the soundbar. Then there are a variety of connection options for taking pictures out of the DVD player in the soundbar and onto your TV or projector.


This means that many people will be able to get by for the majority of the time with just two cables emerging from the soundbar – a nice, tidy state of affairs that will likely be especially appreciated by people hanging the soundbar on their wall.

Looking in more detail at the system’s connections, the subwoofer provides both coaxial and optical digital audio inputs, two separate stereo audio inputs, an FM antenna for the built-in radio tuner, and the supply jacks for the umbilical cord. Meanwhile the soundbar provides an HDMI output, a component video output, an RGB SCART output, a stereo TV audio input and, on the front, an iPod dock connector, a USB and a line-in.


Handily the iPod dock is actually supplied with the soundbar; there’s no need to buy a separate unit. It’s also nice to find included as standard an HDMI cable, a SCART cable, an line-in cable, an FM antenna, and even the wall mounting bracket. Truly our cup runneth over! 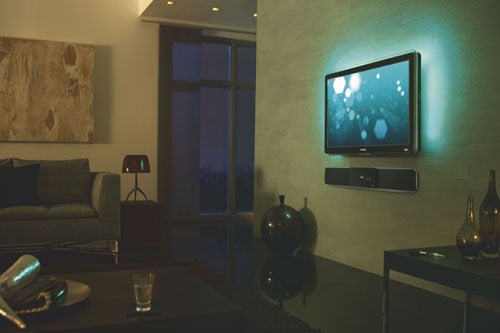 Let’s turn our attention now to what exactly the HTS8140 is capable of playing. On the video side, it’ll handle DivX 3.11, DivX 4.x, DivX 5, DivX 6.0, DivX Ultra, MPEG1, MPEG2, and WMV 9, while disc formats can be DVD-Video, DVD+R/RW, DVD-R/RW, Video CD/SVCD, CD-R, and CD-RW. As for audio formats, MP3 and WMA are both supported, though AAC sadly is not on the menu, meaning you can’t encode tracks to your iPod using Apple’s preferred compression standard.


Dolby Digital 5.1, Dolby Pro-Logic II and DTS are all supported from DVDs, of course, and finally, JPEG stills can be played from CDs, DVD+R/+RW drives and USB storage devices.


Delving now into the HTS8140’s onscreen menus, a number of other interesting picture talents come to light. Heading these up is a video upscaling engine capable of turning your standard def DVDs into 720p, 1080i or 1080p high definition. What’s more, this upscaling engine is supported by Faroudja’s acclaimed DCDi processing, particularly renowned for removing the jagged, blocky look to contoured edges that blights many upscaled images.

There are also a series of image presets for you to choose from (though we’d recommend you stick with Standard), Gamma and Chroma Delay adjustments, and a ‘True Life’ system which, so far as we can tell, enhances the image’s sharpness.

On the audio side of things, a setup menu is provided for the system’s surround sound audio processing (dubbed Ambisound by Philips) that includes such options as room acoustics, room placement and listening position.


Firing up the HTS8140 with the surprisingly good horse drama Seabiscuit and, of course, the opening 20 minutes of Saving Private Ryan, I was immediately impressed by the HTS8140’s performance talents – and my enthusiasm only grew over more extended viewing.


Starting as seems proper with the system’s audio, the sheer scale of the soundstage the bar produces is really quite remarkable. With the Ambisound processing set to Multi-channel, the audio is pushed so high and wide around your living room that you almost completely forget that all the audio information is coming from the relatively diminutive soundbar.


What’s more, the effects we’re talking about are genuinely placed with precision. The general, muddy ‘ambient noise’ effect heard with lesser soundbar systems is replaced by clearly delineated treble and bass separation, and a keen sense of film ‘geography’ – even with the sounds that find their way to the extreme edges of the soundstage range. 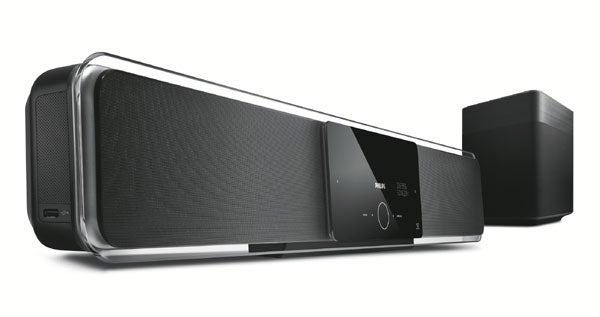 Crucially, though, while the sound beam-based Sonowave technology at Ambisound’s heart is clearly terrific at pushing audio effects far and wide, it also knows which effects and, especially, dialogue need to be kept locked in place in the speaker, tightly positioning them directly under the action you’re watching. There’s no sense of dialogue seeping unnaturally away from the screen into other parts of your living room.


The HTS8140 is mostly successful when it comes to bass, as well. There’s certainly plenty of it, with the subwoofer using its sheer size to full effect to produce some truly prodigious rumbles from Saving Private Ryan’s exploding shells or Seabiscuit’s racing hooves.


In an ideal world, the bass produced from the soundbar rather than the subwoofer would be a touch more clean; a touch of muddiness creeps in there from time to time. But the bass crossover point between the soundbar’s and the subwoofer is well judged, so this muddiness is generally quite nicely disguised by the emergence of the subwoofer.


As for volume levels, we cranked things up extremely high without any distortion in the speakers, and without any unwanted rattles from the soundbar or its disc tray. A little harshness creeps in at really high volumes, but we’re talking about levels of racket that will be way beyond what most normal folk will want to tolerate anyway.

My only significant complaint about the HTS8140’s movie audio performance is that at no point did I feel really convinced that there was any proper sound coming from behind me. Maybe I occasionally sensed something vaguely ambient over my shoulder, but specific surround effects never really happened, renewing my conviction that no 2.1 system of any sort – soundbar or separate speakers – will ever replace a proper 5.1 speaker system.


Leaving the films alone for a moment, I turned my attention to CD and MP3 with mixed results. The compressed nature of MP3 tracks seems to suit the system quite well, as it produces them with decent clarity and ‘punch’. But the extra precision and range of CDs causes one or two problems, with bass sounding slightly forced and the soundstage not sounding quite as cohesive as it does with film soundtracks – even if you do the sensible thing and stick with the system’s stereo mode. Still, while the HTS8140 is perhaps not going to appease hi-fi enthusiasts, its musical performance is actually more than adequate as a ‘back up’ talent to its main film-viewing raison d’etre. 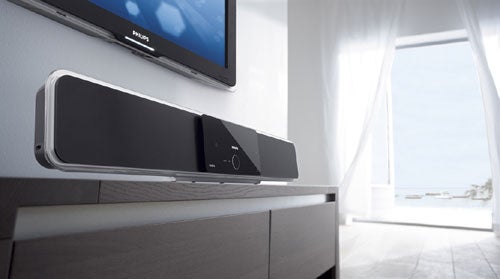 Although inevitably the HTS8140’s audio talents are the things we’re most interested in, I’m happy to say that its picture quality is also unexpectedly outstanding. Philips has long made very respectable DVD players, so I wasn’t expecting anything disastrous. But I certainly wasn’t prepared for just how superbly well the deck’s upscaling systems work.


Both of our test DVDs commonly look blocky, grainy and fuzzy through upscaling decks, but they emerged from the HTS8140 onto our test screens – even our 140in projection screen – with a combination of purity and pseudo high-def sharpness that pushed dreams of a future Blu-ray soundbar right back into the darkest recesses of our fevered brains. Outstanding.


As a die-hard home cinema fan, I always approach systems like the Philips HTS8140 with a healthy dose of scepticism, knowing full well that they won’t really be able to deliver the ‘proper’ surround sound performance I crave. But I have to say that despite certainly not being a replacement for the full 5.1-speaker Monty, the HTS8140’s supremely chic design, effortlessly cool concept, great visuals and really clever audio implementation has won me over. In other words, if the ‘front surround’ concept suits you, then you owe it to yourself to make sure the HTS8140 definitely finds a place on your shortlist. Especially if you’ve also got one of Philips’ matching tellies.