We recently posted a review of Philips’ HTS8100 soundbar, which uses the company’s Ambisound technology to create a semi-convincing surround effect from one compact unit. The HTS6600 system uses the same technology, but this time it’s built into a more traditional 2.1 system that comprises two vertical speakers and a chunky subwoofer.


What’s most striking about this system is its incredibly debonair design. The main DVD console is finished in tasty piano black with silver around the edge and a row of tiny illuminated buttons on the front. Hit the open/close button and the entire right hand side slides across, allowing you to insert your disc. The whole unit is perched on a circular stand that makes it look hi-tech and futuristic, setting it apart from other ‘set-top box’ style systems on the market.

The speakers are similarly styled in black and silver and perched on circular stands, but they can also be wall-mounted. Inside each one is a set of independent speaker drivers positioned at precise angles, which attempt to mimic the effect of a real 5.1-channel system, whatever the size or shape of your room.


Setup is quick and painless, taking only a few minutes to get up and running. The speakers connect to the back of the powered subwoofer (which is complementarily styled in piano black) using pre-connected, colour-coded cables, while the main unit is connected to the sub using one lead and doesn’t require a separate power supply. Connections on the main unit include HDMI, component and RGB SCART outputs plus a 3.5mm TV audio input. On the back of the sub meanwhile is a coaxial digital audio input (useful for hooking up your Sky+ box), two pairs of stereo audio inputs and antenna inputs for the built-in RDS FM/AM radio tuner.


1080p upscaling is very much in fashion right now but the HTS6600 stops at 1080i, a decision that might make those with Full HD TVs look elsewhere. Other key features include playback of DivX Ultra from DVDs or CDs, plus MP3, WMA and JPEG files can be played from disc or a USB flash drive, which can be plugged into the USB port on the side of the main unit. Alongside the USB port is a 3.5mm minijack input for MP3 players and a port that lets you connect the optional Philips HTD7001 dock for iPods and GoGear devices.

The system offers Dolby Digital, DTS and Pro Logic II decoding, while Smart Surround automatically selects stereo or multi-channel output according to the type of content being played. DoubleBASS processing takes bass frequencies lower than the sub’s cut-off point of 30Hz and reproduces them within its audible range, while individual bass and treble settings allow you to tweak sound to achieve the best balance. Finally you get a range of pointless sound equaliser settings with names like Action, Rock and Concert.


Not only is the system easy to set up but it’s also easy to operate thanks to the really intuitive and well-made remote, which works in harmony with the logical and responsive onscreen menus. There is one minor gripe though – the sound drops out for a good few seconds when you restart the disc after pausing. 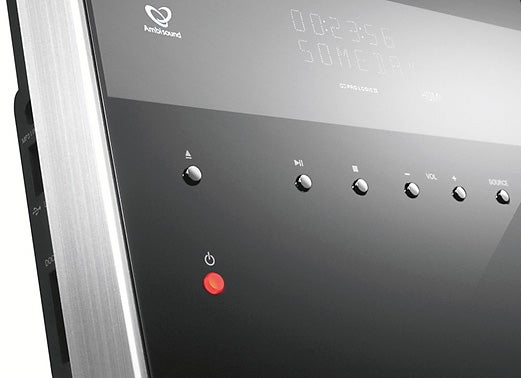 The system turns in a decent performance with the ”Pearl Harbor” DVD’s breath-taking Dolby Digital 5.1 soundtrack. But it’s worth making one thing clear – the HTS6600 is no match for a true 5.1-channel system. Despite Philips’ claims to the contrary it doesn’t offer anything near multi-channel surround sound – at best, Ambisound is a highly effective stereo widener, which increases the sense of space across the front channels. At no stage did we feel as though the Japanese planes soaring over Pearl Harbor were behind or to the side of the viewing position, which keeps all the action contained to the front of the room. We don’t wish to sound overly negative but if you want a real surround sound experience then we’re afraid you’ll just have to bite the bullet and find space for six speakers. 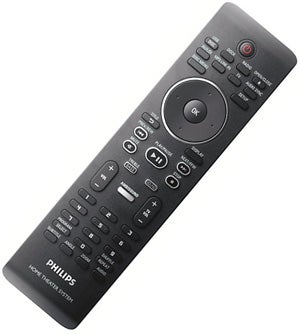 But once you’ve accepted this, it’s time to kick back and enjoy the HTS6600 for what it is – a refined and astonishingly muscular 2.1 system. The front channels pack plenty of muscle and bite, giving the rat-tat-tat-tat of aircraft machine gun fire the sort of sharpness that will get the hairs on the back of your neck standing to attention. This is as exhilarating as three-channel home cinema gets, almost matching more expensive systems like the Onkyo LV-S501 for sheer heart-pounding dynamism and detail – and importantly, it’s much better than anything your TV speakers could muster.

And once you’ve tamed the subwoofer, it does a terrific job at making the rousing explosions of the Pearl Harbor attack sound full-bodied and menacing, blending seamlessly with the fronts to create a very pleasing sonic balance between the low-, mid- and top-end frequencies.


The system also does a stand-up job with the picture basics – rich colour saturation, sensitive handling of subtle colours, sharp fine detail reproduction and a lack of MPEG noise. However upscaled 1080i images do exhibit some jagged edges and a touch of noise around some moving objects, but these artefacts only slightly detract from what is generally a solid picture performance. 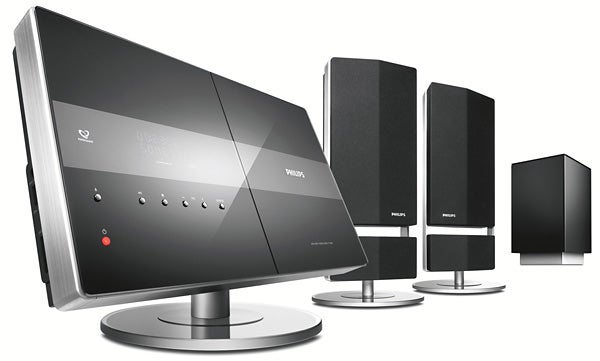 
Like most 2.1-channel systems with virtual surround processing, the HTS6600 is no substitute for a proper 5.1-channel system, with Ambisound failing to throw those all-important effects into the necessary areas of the room. It’s a terrific stereo widener, but as a ‘surround effect’ it’s no great shakes.


But if you’re simply looking to improve upon the sound quality from your TV’s speakers, then we reckon this system is just the ticket. Its three-channel sound output is powerful and classy, and from a superficial perspective it’s one of the most attractive systems of its type.