It may seem like sacrilege to home cinema purists, but 2.1-channel systems are becoming just as popular as full 5.1 systems. After all, not everyone has the space or the appropriate room layout to house rear speakers, so three-channel systems offer an ideal compromise.


The lack of rear and centre speakers means that manufacturers have to come up with ways of replicating the 5.1 experience from just two speakers, and we’ve heard a range of different technologies that make this possible, from Sony’s S-Force Front Surround to Onkyo’s Theater Dimensional via Dolby Virtual Speaker. The results range from useless to moderately convincing, and Philips’ Ambisound usually sits somewhere in the middle, so we’re eager to find out how it fares on the company’s latest 2.1 system, the HTS6515. 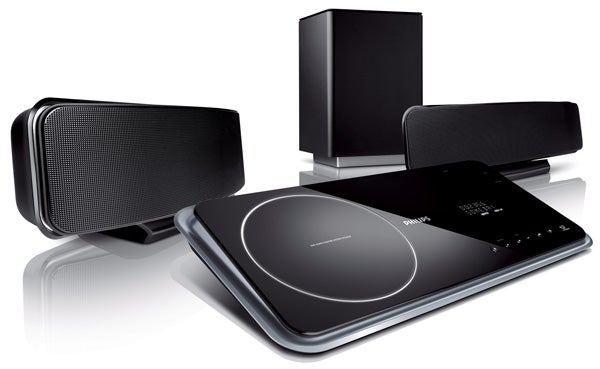 But before we get to that, let’s take a moment to admire the system’s design, which is quite frankly staggering. Philips has already created some of the most stylish 2.1-channel systems ever seen (just check out the exquisite HTS6600 for proof) but with this system the company has really pushed the boat out. The gloss black and silver main unit looks genuinely elegant, and offers a variety of mounting options. For the tabletop, there’s a silver stand that clips onto the bottom, but the unit is so slim that it can be wall mounted using the supplied bracket. But the thing that’s guaranteed to elicit the most gasps of delight is the disc loading mechanism – press Open and the large circle on top raises up and swings to the side, allowing you to pop in a DVD or CD. Pure class.


The accompanying speakers (which can also be wall-mounted) are robust and heavy, with each one containing three 2.5in full range integrated drivers that perform Ambisound’s pseudo-surround wizardry. There’s also a powered subwoofer, which is bigger than the other components put together, but it’s certainly one of the better looking woofers we’ve come across and its upright design means it has a fairly small footprint. 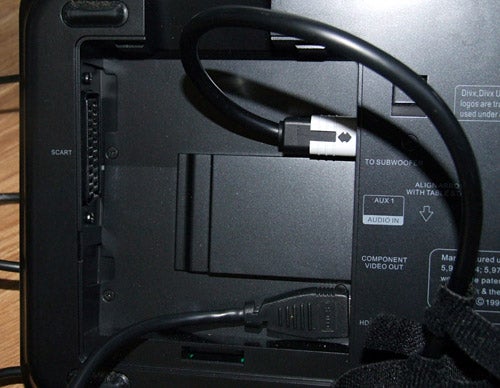 The main unit also boasts a USB 2.0 port that supports DivX Ultra, MP3, WMA and JPEG playback, all of which can also be played from disc. Alongside it is a minijack input for portable music devices and the like.


Philips is never shy when it comes to features, and true to form the HTS6515 is full of tricks. Of primary interest to flat panel TV owners is the system’s ability to upscale DVDs to 720p, 1080i and 1080p via HDMI, and there’s a selection of picture presets (Bright, Soft and Personal) to suit different tastes. 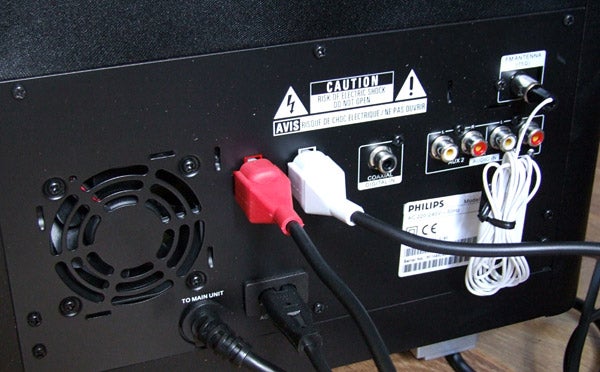 The audio side is also well catered for, and Ambisound is the star of the show. According to the blurb, it uses ”the effect of psychoacoustic phenomena, array processing and precisely angled driver positioning” to produce a 5.1-channel effect from any listening position, no matter the shape of your room. To optimise the effect, there are a few options in the setup menu that let you programme the room acoustics (hard or soft walls), the system’s placement in the room, the distance between speakers, and the distance of the listening position from the main unit.


It works with Dolby Digital or DTS soundtracks thanks to the built-in decoders for both formats, and other audio features include Dolby Pro Logic II, DoubleBass (designed to add extra punch to music playback), FullSound, which enhances MP3 and WMA playback, plus a range of fairly pointless equaliser settings.

The menu system isn’t much to look at but more importantly it’s easy to navigate and pleasingly responsive. The remote is a very practical shape and size and boasts excellent button placement, but annoyingly you have to hold down chapter skip to rewind or fast-forward, which sounds petty but has always been a pet hate of ours. 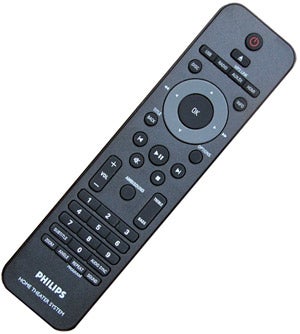 The HTS6515’s sound quality is pretty special. With movies, the sound is powerful, punchy and beautifully balanced, with the subwoofer supporting rather than overpowering the other speakers with taut, controlled bass. Also impressive are the eloquent speakers, which convey treble and midrange with smoothness, accuracy and plenty of character. This also translates into music playback that’s well above the quality we’d normally expect from an all-in-one system, but based on the quality of Philips’ previous 2.1 systems it shouldn’t come as a surprise.


To test Ambisound’s prowess we needed a DVD with a soundtrack that was full of busy surround channel information, and ”The Return Of The King” fits the bill perfectly. Sadly, though, the film’s scintillating soundtrack demonstrates the ineffectiveness of the technology – the flying arrows, clanking swords and passing horses during the siege on Gondor sound localised to the area around the speaker position, and don’t reach far enough into the room to convince as a 5.1-channel effect. However, the sound is far more spacious and expansive than your average TV’s speakers, which will be enough for many users. 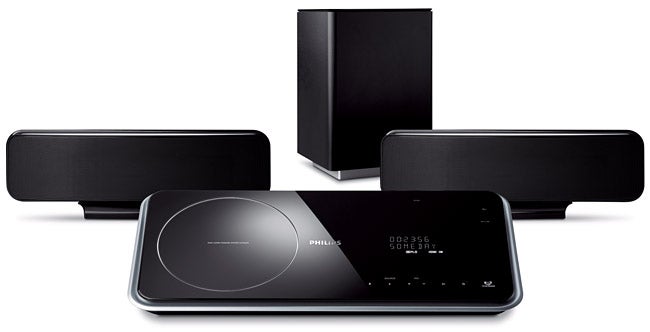 When it comes to picture quality the HTS6515 does a wonderful job with ”The Return Of The King”. With the image boosted to 1080p on our 40in Toshiba LCD, the depth and solidity of the picture is a joy to behold, plus high detail levels and a lack of noise give the image pleasing clarity and focus. It obviously doesn’t reach hi-def levels of sharpness but this is a pretty good second best. The above qualities are best demonstrated during the epic battle scenes, where the tapestry of CG detail and live action is reproduced with a truly cinematic lustre.